The Grianán of Aileach

After being generously indulged with all things archaeological on our last holiday to Ireland, back in 2014, this time around the only thing I really really wanted to do, besides visiting the statue of Manannán, was a trip to the Grianán of Aileach (the 'Sunny Place' of Aileach), which is situated just across the Irish border in Co. Donegal: 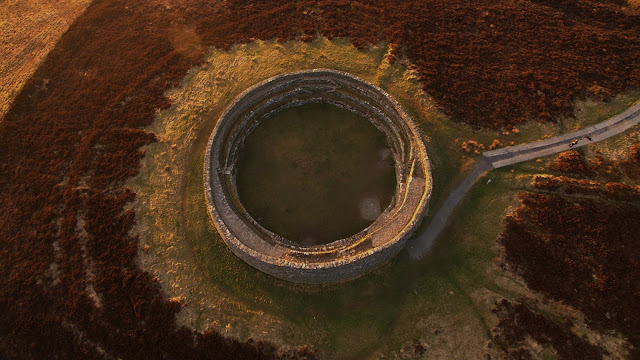 As you can see from this overhead shot (most definitely not taken by me) it's an impressive stone hillfort with really thick walls – they're about 4.5m thick, or nearly 15ft for you imperialists. 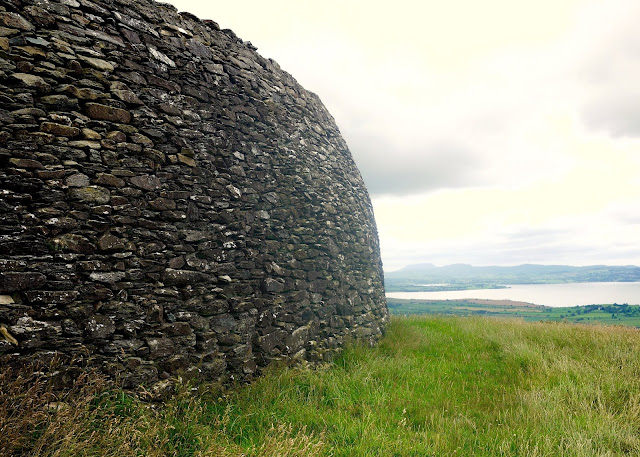 Historically speaking, the site is thought to have been occupied as a hill-fort of some sort or another from as early as the Bronze or Iron Age, although evidence of activity may go back as far as the Neolithic. It's situated at the top of a hill that commands an impressive view. To one side there's a view of Lough Swilly, while to another there's a view of Lough Foyle, which heads off towards the Atlantic. 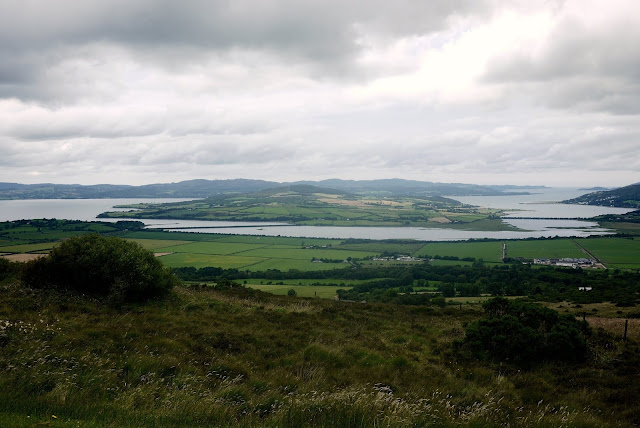 The walls as they stand today are thought to have originally been built some time in the sixth or seventh century, and the place was occupied for several centuries until it was destroyed in 1101 by Muirchertach Ua Briain, the king of Munster (and self-proclaimed king of Ireland at the time). By the nineteenth century it was in a state of disrepair, and restoration work was undertaken in 1874-1875. After the walls partially collapsed in the early 2000s, further restoration was undertaken, which proved rather controversial.

Given how exposed its situation is, the walls do a good job of protecting the interior of the fort from the elements. 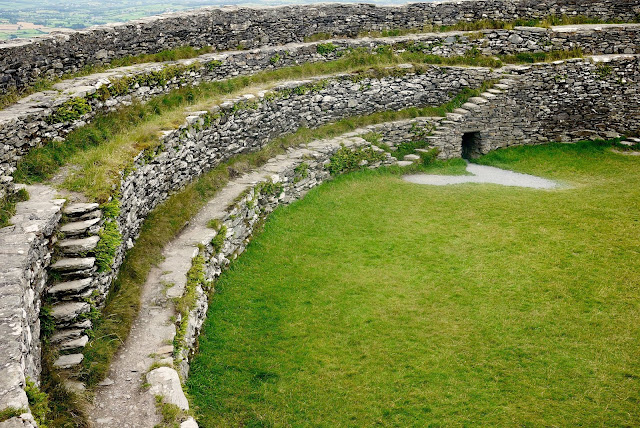 There's only one entrance, so it's pretty good for defence, too. 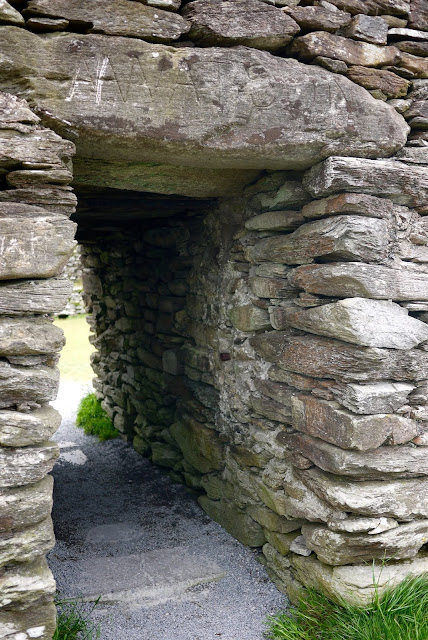 The hillfort served as a royal capital for the Cenél nEógain ('the Kindred of Eógain,' or 'Owen' as the name is Anglicised), a branch of the Uí Néill ('Descendants of Niall'), but it's the mythology that's attached to the site that interests me. There are several Dindshenchas ('Placename Lore') stories that explain the origins of the site and how it got its name, and even within these stories there are several explanations that may be given. 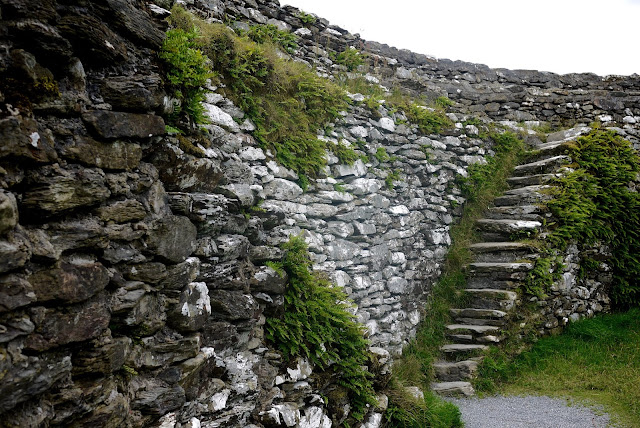 The main version of the story tells of how a son of the Dagda, Áed, had an affair with a married woman. The name of the woman is apparently irrelevant because we're never told it, but her husband, Corrcend, is not a particularly happy bunny upon discovery of the news. He murders Áed in cold blood and then decides to leg it right quick in order to avoid the consequences. The Dagda, however, being king at the time, marshals his resources and sends out a search party or two. Corrcend is eventually found and brought before the grieving king.

The Dagda decides to punish Corrcend for his crime and orders him to build a suitable grave for his son. Corrcend is forced to trudge down to one of the local loughs where he must then carry rocks back up to the top of the hill in order to build a grave-mound for Áed. As the grave is very near its completion, Corrcend carries an especially large rock up the hill. By this point Corrcend is exhausted and using every last ounce of strength in his reserves, but soon he finds he can't take it any more. As he reaches the top, he cries out from his exertions. First he shouts "Ail!" which pretty much means "the rock!" and then he shouts "Ach!" which pretty much means "ach!" And Corrcend's heart gives out and he dies on the spot. 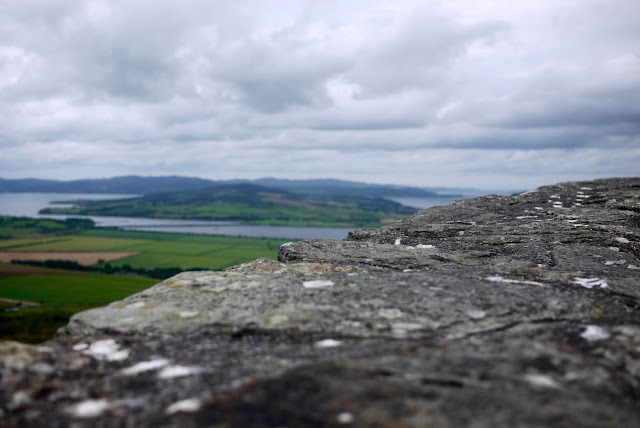 The Dagda, evidently having a sense of humour even in the midst of a personal tragedy, declares that Corrcend has given the place a fitting name, and announces that Ailech shall be the name of his son's grave from that point onwards. Ailech, as it happens, can either refer to a pile of rocks, or else it can refer to a type of satire or an invective. By coincidence, the word aílech may refer to dung or manure.

So Corrcend's famous last words could effectively be interpreted as a rather stilted exclamation of "Shit!" 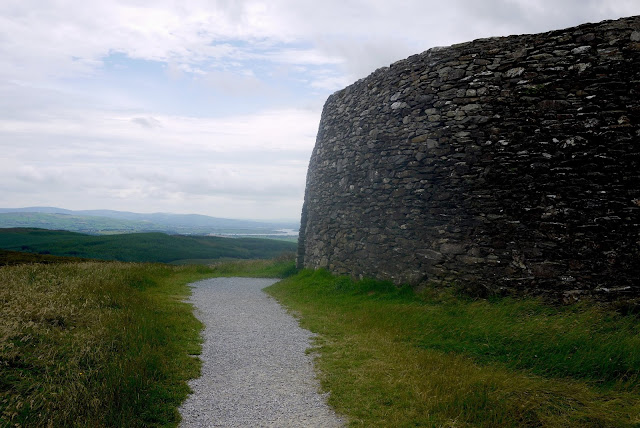 The Dagda then employs a couple of stonemasons to build a hillfort on top of the grave. When the hillfort is finished, the Dagda gives it to Néit and his wife Nemain.

A while later, after what we can only presume is a glorious reign because we know pretty much nothing about Néit's life, Néit is killed by Nemtuir the Red, a Fomorian. This is during the reign of Mac Cuill, Mac Cécht and Mac Gréine, the three sons of Cermait Milbél, another of the Dagda's sons, and their reign was long after the Tuatha Dé Danann defeated the Fomorians at the second battle of Mag Tuired. The fact that a member of the Fomorians is causing trouble – breaking the peace treaty that was agreed upon after the Tuatha Dé Danann won the battle – is a bad sign.

Upon hearing the news of Néit's death, the three kings make haste to the Grianán of Aileach, having heard rumours of a crap ton of treasure being up for grabs. There's no indication that the kings made any effort to retaliate or seek justice for Néit's death, their only concern is treasure and this is another bad sign – a king's job is to demonstrate good judgement and ensure justice is done (amongst other things, of course), but to all intents and purposes neither Mac Cuill, Mac Cécht, nor Mac Gréine have shown any concern in this. As traditional narratives go, this is a pretty big sign of impending doom...

While they're at the Grianán of Ailech, a member of the Milesians, Íth son of Breogán, arrives from Spain. Íth is the first of the Milesians to arrive in Ireland, having spotted land in the far distance while looking out to sea from the top of a great tower his father had built, and he decides then and there to sail over to this new land and see what it might have to offer. Having made his way to the Grianán, Íth finds the three kings of the Tuatha Dé Danann still bickering about the treasure, although they stop for a moment to welcome their new guest. During his stay, Íth acts as a peace broker, settling the matter once and for all.

Íth also comments on how rich and wonderful Ireland is, how pleasant the climate is, and how the country has everything one could want a home to offer. Mac Cuill, Mac Cécht, and Mac Gréine hatch a plan to kill Íth, seeing him as a threat. He hasn't made any threats outright, but his comments clearly imply an interest in muscling in on everything Ireland has to offer, and naturally Mac Cuill, Mac Cécht, and Mac Gréine aren't interested in sharing. Íth is killed on his way back to his ship, the site of his death then taking his name, Mag Ítha, or 'the Plain of Íth.'

The mysterious disappearance of their beloved relative prompts the sons of Míl, Eber, Donn, and Éremón to sail over from Spain in order to see what's going on. This ultimately ends up in a battle between the Tuatha Dé Danann and the Milesians over Ireland's sovereignty, which is fought at Tailltiu. In spite of the Tuatha Dé Danann's best efforts to fend off the invaders, the Milesians win, and the three sons of Cermait Milbél are killed. The impending doom that's foreshadowed by the three kings' bad behaviour is fulfilled. In the resulting peace agreement, the Tuatha Dé Danann take to the hills and the otherworldly síde, and Ireland is handed over to the realm of human mortals.

As it happens, the fort does appear to have been built on top of a Neolithic grave mound, which might have influenced the story of Corrcend. That's assuming the site's identification with Ailech is correct, however; since Ailech was originally destroyed in 1101, the place remained a symbol of political power in the area, and poets linked named various different places as being the 'real' Ailech, which has confused matters somewhat. In recent decades, a number of other sites have now been suggested as the possibly 'original' Ailech, but – as yet – these proposals have yet to gain much traction. 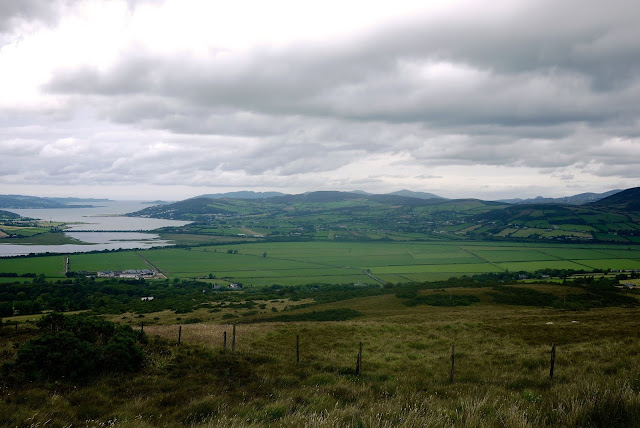 Whatever the case may be, it's a beautiful and unique place and well worth the visit. If you ever get the chance, go!

A Gaelic Polytheist living on the west coast of Scotland with my family and menagerie of pets, I'm the sole author and site owner of Tairis.
Here you'll find some of my more personal ramblings on how I live my spirituality, along with news, links of interest, and anything else relating to Gaelic Polytheism. You can also find me on Wordpress.