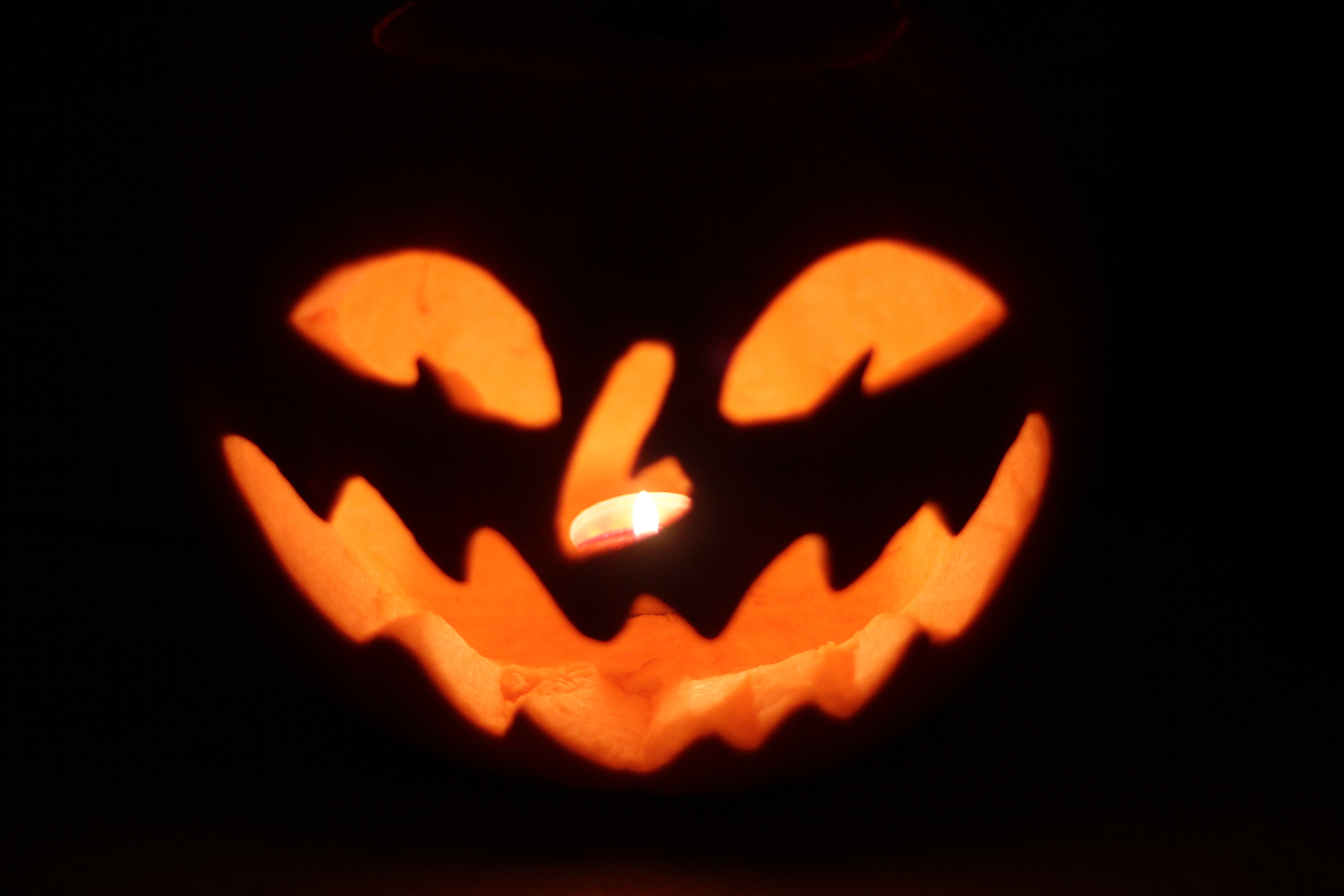 Samhainn started early for us here, with a flying visit from my nephews (brought here with my mother, who was on babysitting duties for their half-term holiday). Their journey up here was fraught with difficulties and delays - first mum blew two wheels on her car during an attempt at avoiding a pheasant, and had to postpone her travel plans by a day to get them fixed, and then they got stuck on the motorway after a traffic accident closed the whole northbound side of the road. Then, just as they approached Glasgow as it was getting close to midnight, they discovered that the motorway that would take them to here was closed for the whole night. Mum gave up and got a hotel in the end.

So they got here over a day late in the end, and it put our original plans a little off kilter. The most important order of business for the weekend, however, was going to happen come hell or high water, and you'll have to excuse the poor quality of photos because my camera charger is still missing, so I had to rely on my mother's expertise with her tablet. I'd promised the kids a Hallowe'en party, and aside from the chocolate pancakes (which my youngest nephew insists must happen for breakfast everyday when he comes to visit, and he now calls me Auntie Pancake because he loves them so much, and as far as he's concerned it's probably all I'm good for, but oh well. Who doesn't love a good pancake?), the party was all that had to happen that weekend. It was a little disorganised because I'd hoped to prepare a bit more before we did it, but the kids wouldn't wait. I'd managed to put up some spooky decorations beforehand, at least.

Once mum arrived with the boys we took some time to catch up and have lunch, and mum unloaded the car of all the officially tasteful crap she was offloading on me (I now have a decorative cow bell that needs a home...). She'd brought a photo album of all of her relatives (and some of my dad's) so we took a look through all of those and she told me who they all were and so on. Most of them I'd seen before, but until now they were always just faces in old photos. Mum told stories and memories she had of each of them, and Rosie was especially interested in it all, and found "Gertrude" ridiculously hilarious as far as names go. We spent a good hour looking at all the pictures and talking about family stuff.

I appreciated mum bringing the photos up, and hopefully one day I'll get copies of them so I can make my own album and write stuff down about everyone. I only have a few photos of my grandparents and great-grandparents that I can show the kids, and we look at them each year at Samhainn as part of the ancestral focus for the festivities, so for once we could go a bit further back and now I have a few more names to add to my prayers.

For the kids, though, the best bit is the games and the food, so after an afternoon out we got down to the fun stuff. First of all we had to do the costumes. I'd bought them all matching pyjama onesies with glow-in-the-dark skeletons, so they put those on (even my eldest nephew, who's not so keen on dressing up). Then we had facepainting - Tom opted against it, so he brought his scythe out so he had something "special" for his costume too: 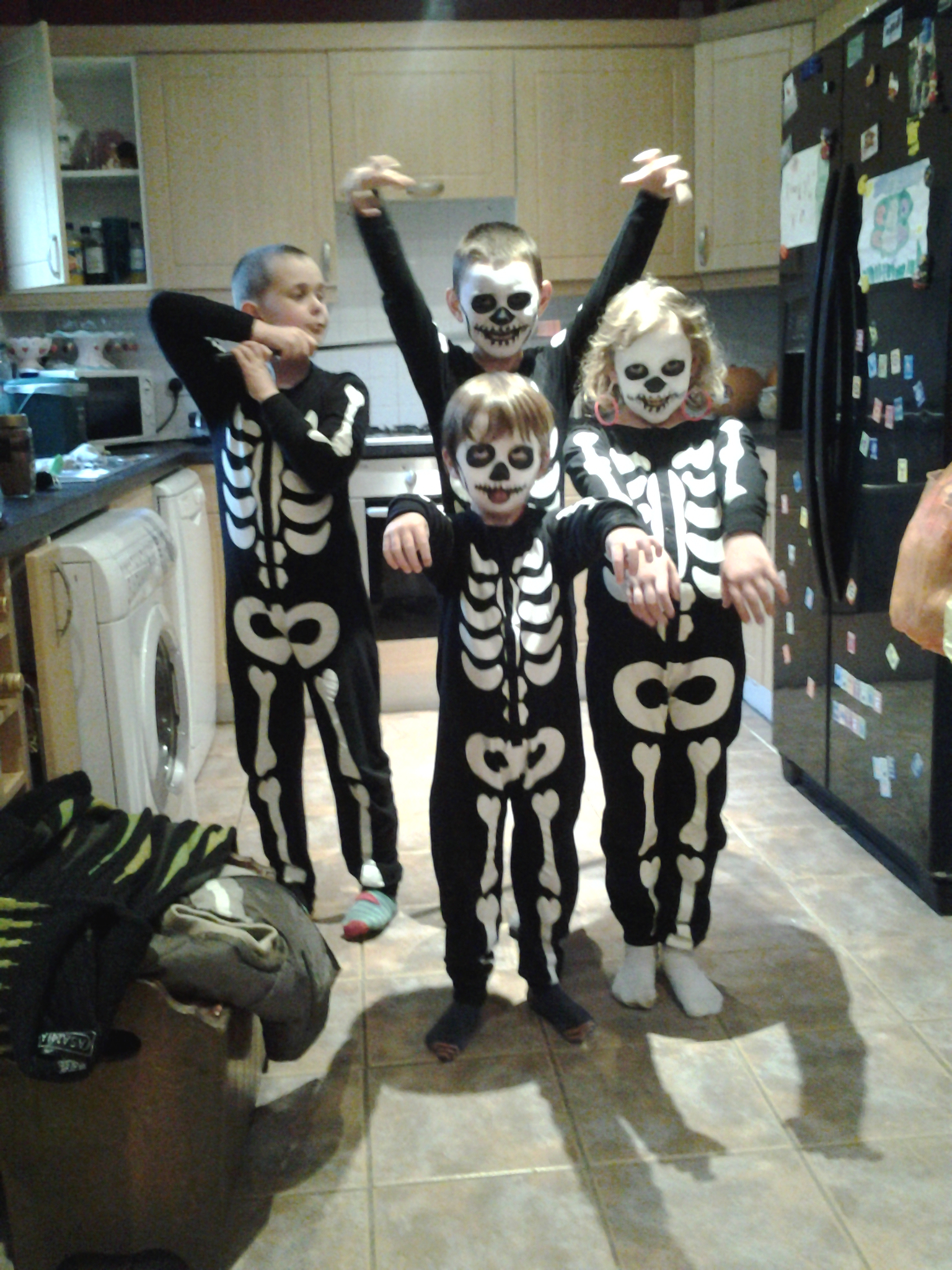 After that we did some lantern carving. I took charge of the tumshie while the kids got on with the pumpkins, and we talked about why we carve lanterns, and why I was carving a tumshie instead of a pumpkin. My mother, who's always insisted Hallowe'en is an American invention, made a point of sniffing loudly in disapproval.

We initially divided the kids into two teams so they could scoop one pumpkin each, but Tom's always been squeamish about pumpkin innards and soon lost interest. Rosie and my youngest nephew eventually decided it was hard work and they'd rather design the faces we were going to carve, so Tom joined in with that instead. My eldest nephew went at the pumpkin guts with gusto, though: 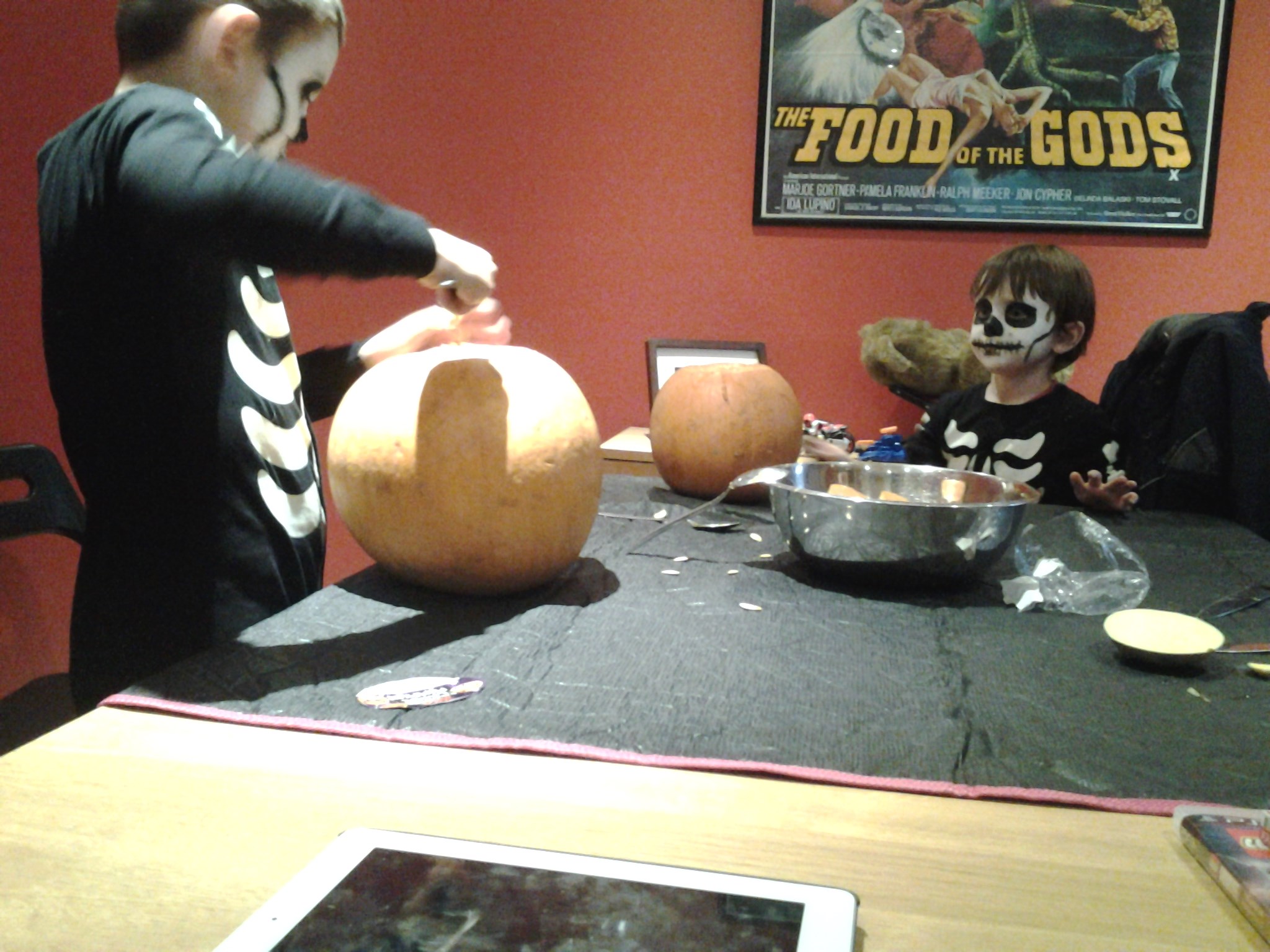 We have a deal now. He's going to come up every year to help.

After we'd got the faces carved, we lit our lanterns with great ceremony (the kids let off Hallowe'en themed party poppers I'd bought them as I lit the lanterns with a quiet prayer), and then we filled the room with candles so it was all atmospheric. While dinner was cooking - just a load of finger foods and stuff like that - we started on the party games. There was the requisite dookin', which my nephews had never done before and who thought it was the best thing ever: 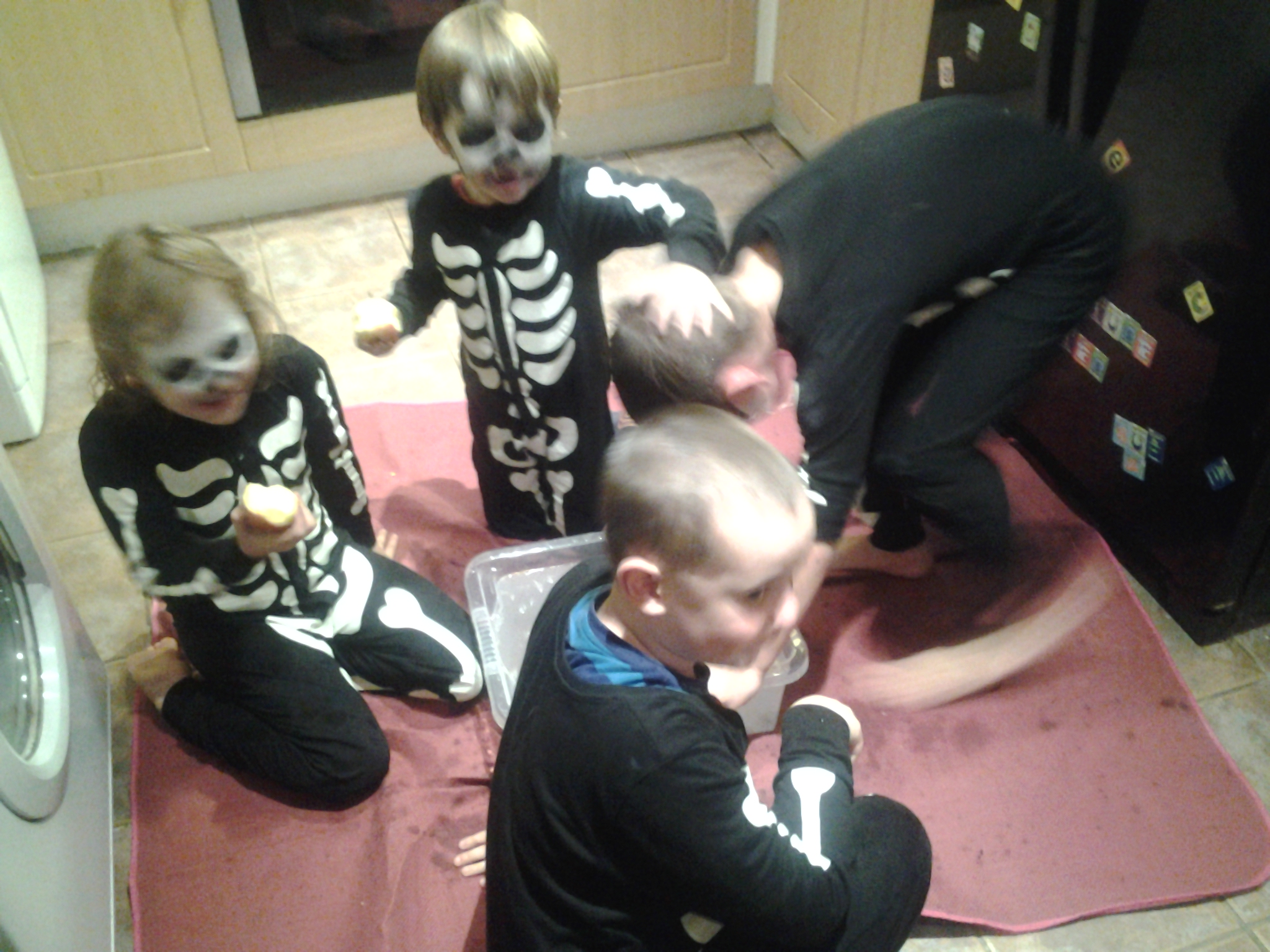 Youngest nephew wasted no time trying to "help" his older brother, as you can see.

After the dookin' and then Lots of Food we had a disco in the dark (so they could see all of their skeletons glowing), and more games, like musical statues and that kind of thing. Eventually we wound things down with Dr Who and popcorn before bedtime.

And that was part one of our celebrations. Part two came the week after, on Oidhche Shamhna itself, and once again the house was tidied and made ready, fresh lanterns were carved in preparation, and I was forced to get up way too early to do Rosie's facepaints so she could look the part in the school parade that day: 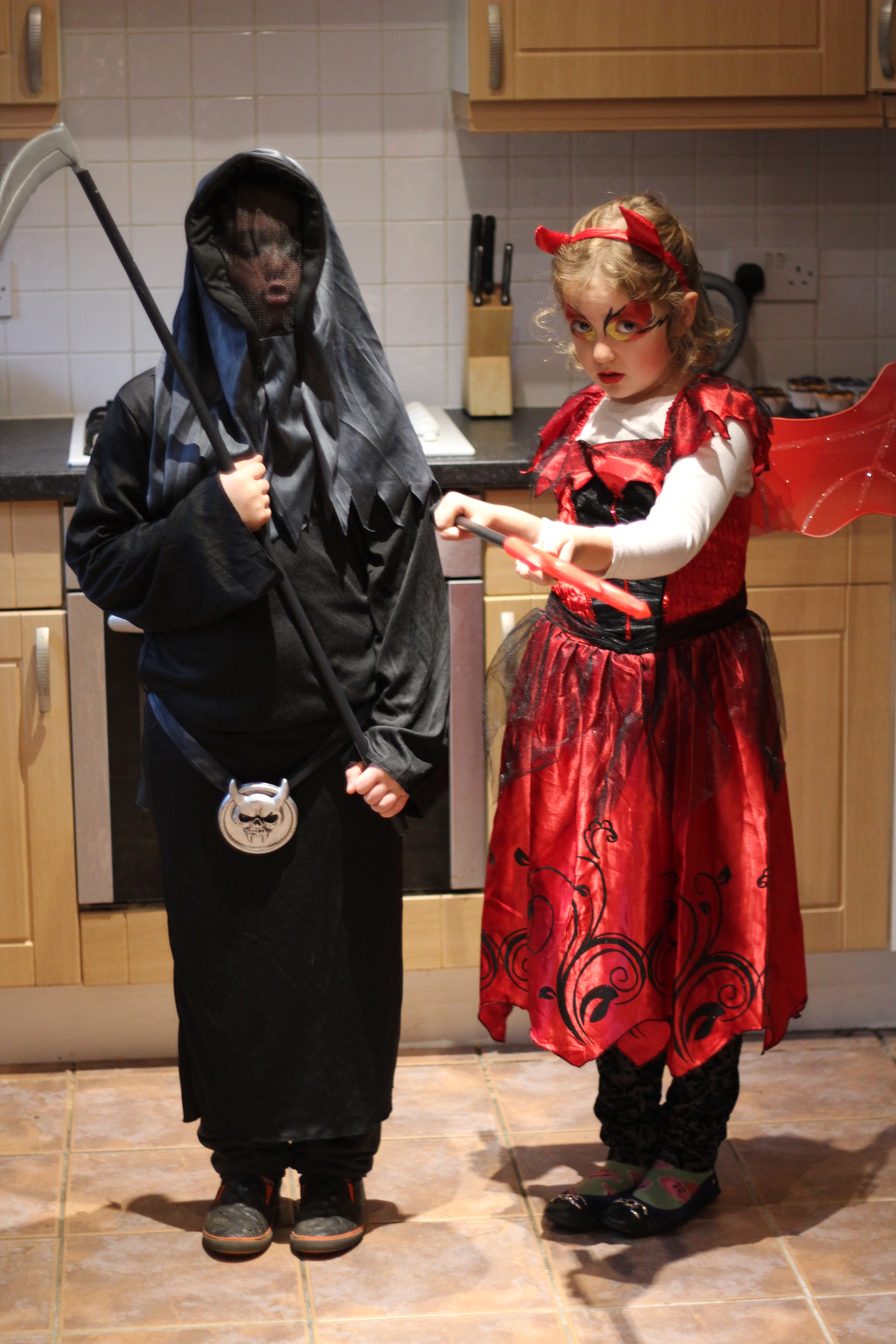 Tom was originally going to go as an Enderman from Minecraft (following on from his Minecraft Steve costume last year), but in the end he was rather taken with the scythe and the costume he ended up with, so he went as the "Master of Doom" instead. Rosie went as "Devil Girl," which is based on a personalised character she likes to play in Minecraft.

The kids were keen to go guising that night, and we invited one of Tom's friends to join us - he lives on a quiet street where nothing much goes on, so we offered to take him around. We invited one of Rosie's friends as well (just to be fair), but she was going to her dad's that evening, so the friend's mum invited Rosie round to play and go guising a bit early on their street instead. She returned with a good haul, and she and Tom tucked into some spooky strawberries I'd attempted while they waited for Mr Seren to get home, and for Tom's friend to turn up. A friend sent me a link to some spooky foods, but in the end I only had time for these and some lychee "eyeballs." The kids were impressed, though, although I still suck at piping chocolate: 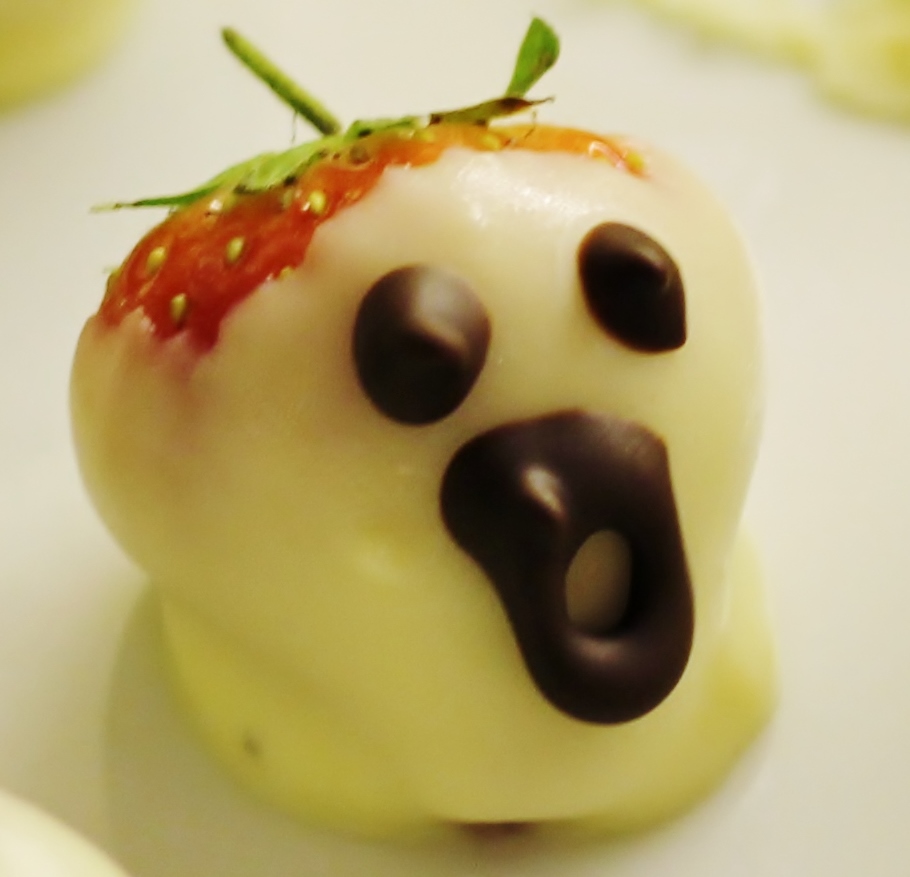 As it got dark we lit the lanterns and made some offerings to get the evening started, and when the friend turned up we had a bit of a disco while Mr Seren had a few minutes to sit down and take a deep breath after getting home from work. Then they went out, leaving me to hand out treats and do battle with Mungo, who was determined to say hello to everyone no matter how much I tried to keep him out of the way. Doors are trivial obstacles when there are people here to give Mungo fuss.

Most years we have loads of kids come to our door, so I'd prepared a load of goodie bags to hand out in advance so I could stay on top of things and - for once - not have to panic about running out too soon. Obviously that meant that I got about half way through the goodies when it started humping it down outside - it was an absolute torrential downpour. Most people gave up after that so we were stuck with masses of treats leftover, along with all of the goodies the kids brought back.

Going by experience now, I didn't bother cooking a huge meal seeing as the kids would be so loaded on sweets, and tired, by the time they came home. So we just had a wee picnic in the living room, with some fresh bread, cold meats, and finger foods etc. The kids shared their sweets out and traded the ones they didn't like with each other, and we watched a bit of Casper together while they chilled out before bed. I was going to let them stay up so we could have a wee vigil together, past midnight, but they were so exhausted after all the excitement they didn't make it past ten. At least that left me with time to myself, to do some devotions and my own observances without distraction. I was too tired and sore to sain the house, so that happened later on, but a little time for some contemplation was just what I needed.

I woke up early the next day - before dawn - and got up to see the sun rise. It was a little chilly that morning, but pretty still and dry, and I was greeted by the birds swooping around and enjoying the first rays of light. I made some more offerings, putting the food I'd left out overnight for the ancestors, and sained the house later on.

As busy as it all was, it felt like a quiet, but successful celebration this year. The only thing we didn't get done was finishing off a hobhouse that Rosie wanted to make to replace the one she made a while ago. The salt dough we used that time just hasn't lasted, so this time we went with proper clay (I offered to help Tom make one too, but he opted to sculpt a dinosaur instead, to keep a mosaic dinosaur he made recently company). The hobhouse is just waiting to be painted and then put in place, but Rosie's procrastinating on it because she's worried it's going to be horrible and it's all going to go wrong, and the brownie will be unhappy with it. Such is the nature of Rosie. She's been asking to write a blog, though, and while I think she's too young to have her own blog online, publicly, I've suggested that she could write a post about making her hobhouse, which she can post here once it's all done. She's keen to do that and she's also wanting to give the brownie their new home, so hopefully that will happen soon.