A stink in the air

So it's been a wee while since I last posted here – the summer has been an extremely busy and exhausting time – but the whole stink that's arisen thanks to the AFA coming out with their recent "statement" seems as good a time as any to dust this old thing off.

The AFA have always been utterly racist and bigoted as an organisation. A change in leadership was never going to change that, so it's no huge surprise that they'd come right out and say something that's racist and bigoted (only surprising in that the previous leadership learned to keep more quiet about it and skirt around it, I suppose). And to be fair, the AFA aren't the only racist heathen organisation out there, they're just one of the more prominent ones. So really, it's just the same shit, different day.

The more disturbing thing that people are up in arms about was a comment from an individual claiming to be CR, saying that CR "embrace the same values" as the AFA espoused in their statement, which, if you haven't seen it, said: 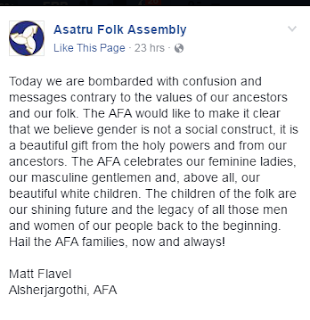 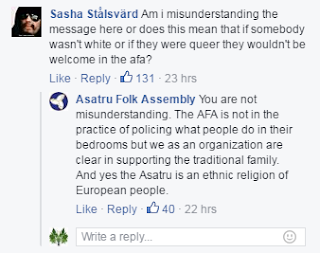 I understand that after something of an outcry in a certain Facebook group, the commenter backtracked and deleted their comment (I'm not a member of the group so I haven't seen what was said), so if you hunt up the post on the AFA page on Facebook, you won't see it there now.

On the one hand, it's kind of mind-boggling that somebody would come out with a comment like that when Celtic Reconstructionism was founded on firmly anti-racist, pro-queer principles. So is Gaelic Polytheism. This isn't news. And for every group or individual who's spoken out against what was said – including Gaol Naofa – they've all said as much. It's written plain as day in The CR FAQ, which was written by community consensus a good ten years ago now. But then again, there are always going to be people who want to pick and choose the bits they agree with. There are always going to be people who want a folkish and bigoted form of CR, where men are manly and women are womanly (whatever that means), and the women dutifully pop out beautiful, straight, white, cisgender babies in between doing the dishes and making their manly man a bacon (natch) sammich. Swoon. What a wonderful community! (So long as you conform, right?)

I suppose it's easy to ignore or dismiss a particular stance a community has taken when people like this tend to hand-wave things they don't like as being "just modern politics" or whatever. That's usually what I've seen being claimed, and again, it's nothing new. Dismissing something as "modern politics I disagree with, therefore not relevant to me" is one thing, though. I'm not quite sure how these people reconcile their beliefs with the history and the mythology their religious outlook is founded on, because Irish myth (the lone commenter who decided to speak on behalf of CR also claims to be a Gaelic Polytheist) is fundamentally rooted in an origin story where the people of Ireland came from somewhere else – Spain, Scythia, Greece, Egypt, you name it.

And while the myths in question have been very much messed about with to frame them in a more Christian context, the general idea of "we came from somewhere else" is thought to be an original, pre-Christian part of the tale that's very much in keeping with what we know of Goidelic cosmology and so forth. The point is, though, either way the Irish believed themselves to be immigrants, and some of them proudly traced themselves back to very non-white origins (whether that's true or not is immaterial, really; they didn't have a problem with it and that's what counts here), and that also found it's way into Scottish genealogy and origin stories, too. And let's not forget that the Gaels, and Celts in general, also have a long history of emigration and colonisation elsewhere (sometimes by choice, sometimes not so much), so they've never exactly been averse to mixing their genes in with the locals, either.

It's only recently, in relative terms, that this idea of having an "undiluted" ancestry (unsullied by non-white genes, that is – mixing with other white people is just fine and dandy, regardless of culture) has become a thing. In that respect, then, I'd argue that it's the folkish types who're forcing their own modern views onto things, while ignoring some pretty fundamental elements of their own religion that contradict them. The same goes for the stuff about "our feminine ladies, our masculine gentlemen" (who, it was confirmed in the comments I included above, must be totally straight and gender-conforming). We don't see much about non-heterosexual relationships or gender non-conforming individuals in the historical sources, and these are areas of study are only just beginning to take off in academic circles, but we can certainly see that it was Christian influence that introduced an outright condemnation of this kind of thing.

Aaaaanyway. This isn't a lone commenter, out there in the dark fringes. For anyone who's been kicking around the CR scene for any length of time it's just one more example of an undercurrent that's always tried to push its way in. It's a problem that's not going to go away, and all anyone can do is keep speaking out against it and joining in with all the other voices who are saying the same. The groups and individuals who keep quiet about it... Maybe that speaks volumes in itself.