We survived 'Hurricane Bawbag' (as it was dubbed) relatively unscathed - we lost a wee bit of fence in the end, and the old satellite dish bounced off gleefully down the road before Mr Seren managed to catch it (losing all dignity in the process). But considering the damage elsewhere, we didn't do too badly at all. With winds over 160mph in some places, it seemed sensible to stay indoors as much as possible, and hope for the best...Thankfully the schools were closed.

Today, however, all is back to normal, and aside from some early flurries of snow this morning we've yet to experience the predicted blizzard. To make the most of it (and as a blatant excuse to get out the house) I decided to spend the afternoon at the garden centre, in order to glory in all things questionably festive in nature. Of course, I took the camera with me, because otherwise I cannot share in the glory of all that is of a questionable and disturbingly festive nature. Allow me to illustrate: 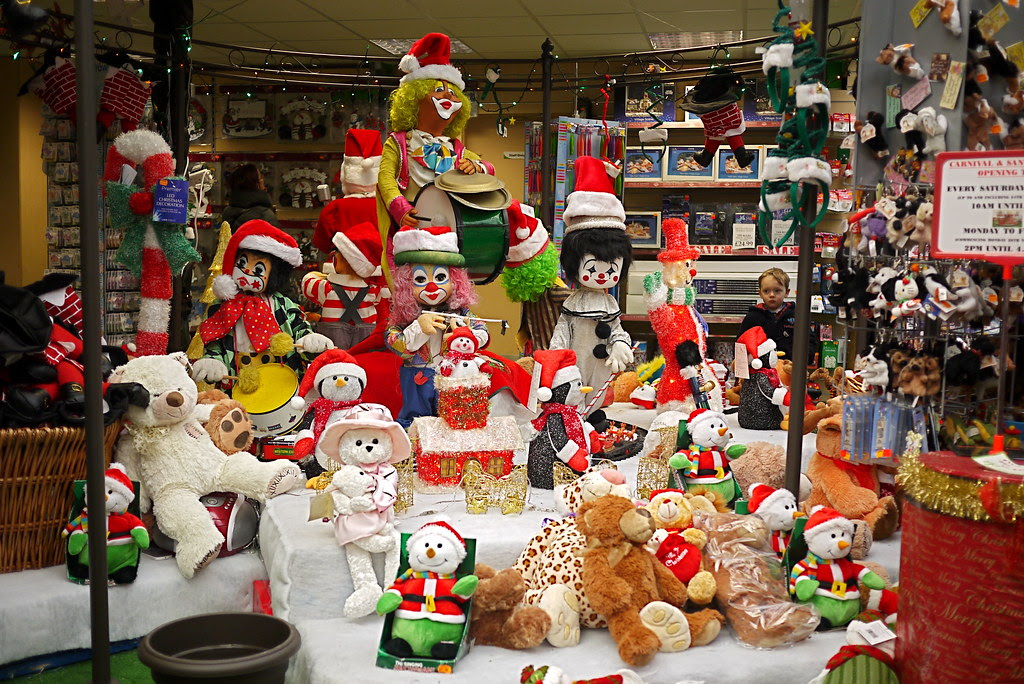 I have to admit, I can't blame the look on the poor wee kid's face at the back there. (Is the tallest clown...supposed to look 'red face'?)

This is something the local garden centre does every year - it's their 'Winter Wonderland' sort of thing, where they put up loads of random and often tenuously festive displays. Aside from the clowns, most of the scenes of recent years have been of various fairy tales that are popularly adapted for pantomimes (they're a popular festive form of entertainment here). This year it's all been toned down a little, the first year we went it was definitely the best. That year, we had homicidal dwarves: 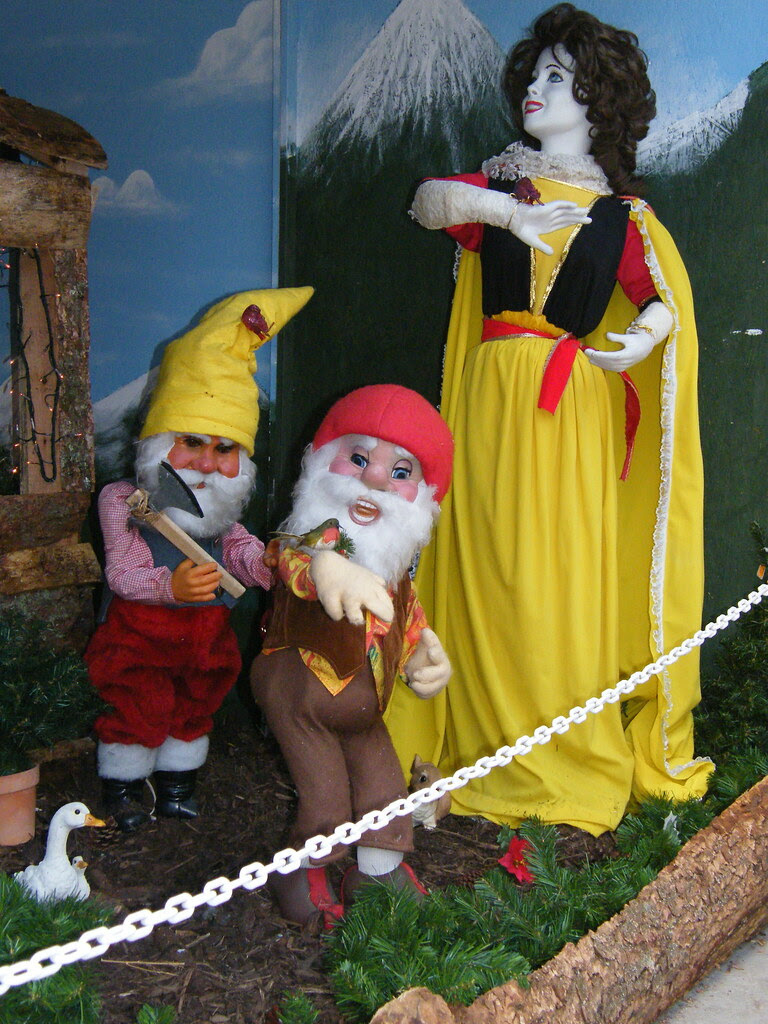 Another year, there was what can only be described as a suggestively come hither Cinderella: 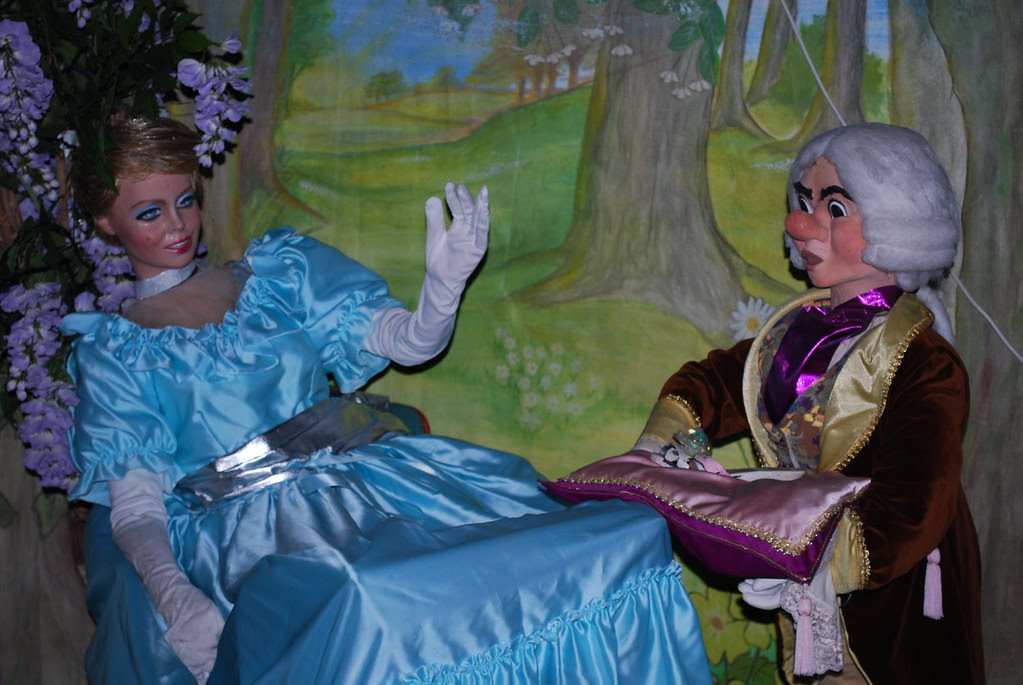 There was no Cinderella this year, but the dwarves were back again. Although alas, one of the dwarves certainly hasn't faired too well: 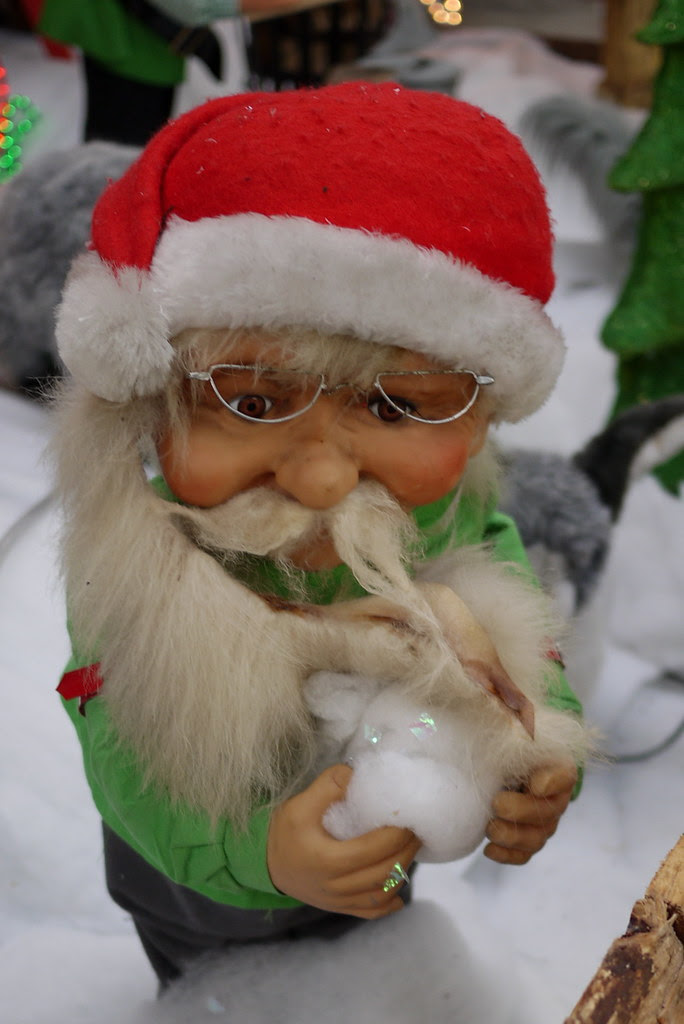 I can only imagine its injuries were the result of a heroic battle against the homicidal dwarf of previous years. A valiant defence of Snow White (a.k.a. Vampyra, I suspect), perhaps, for behold! She returned gloriously this year (after a few appearances with a mop for replacement hair), with the added bonus of a couple of pensive deer in tow: 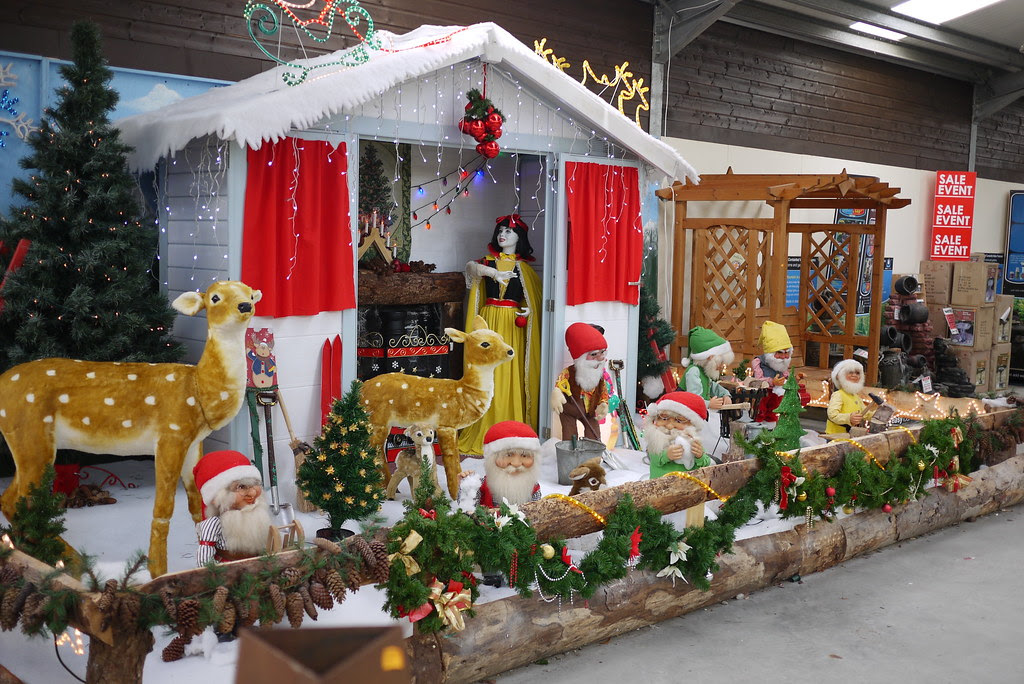 It's perhaps safe to say that 'Snow White' has been taken to a somewhat literal extreme.

It's the clowns that really do it for me, though. I'm not sure quite why they might be considered festive, and they're something I've always found more than a little sinister in general (but especially so, after seeing Stephen King's IT when I was about thirteen or so), but the garden centre tends to go all out with them, for no apparent reason. This one is bad enough: 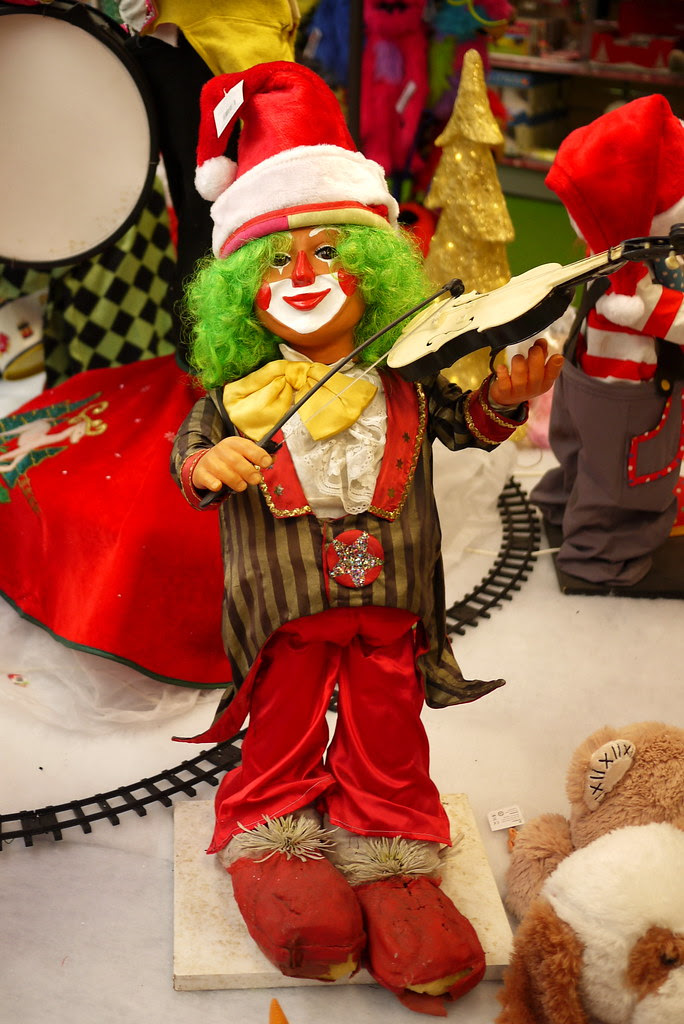 But this one takes first place for downright disturbing. If it were art, I would call it 'A Study in Sinister Nonchalance': 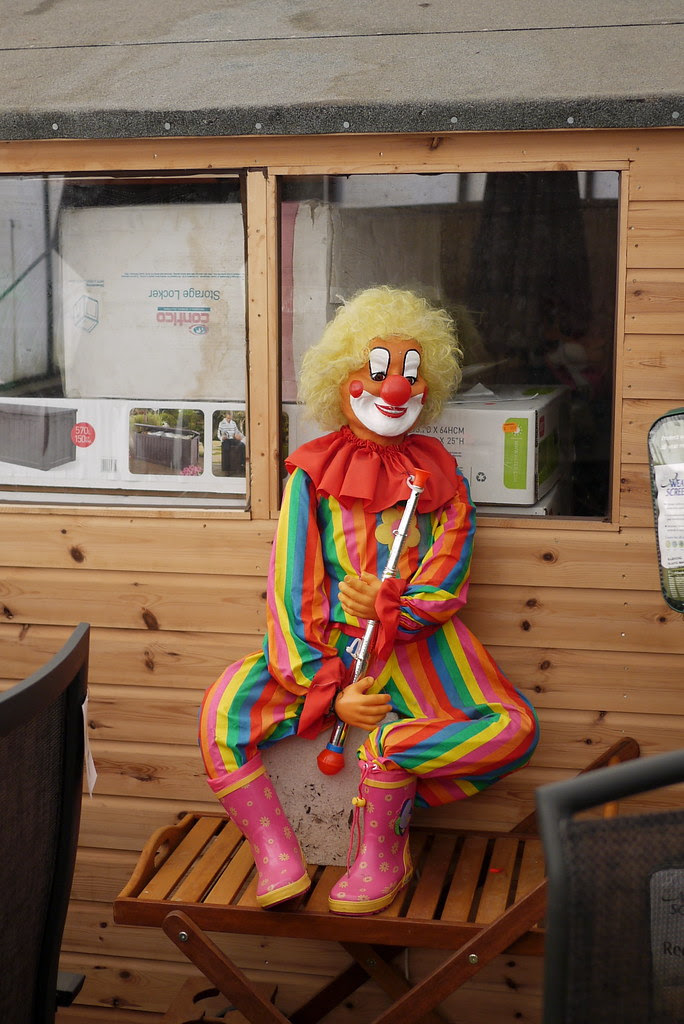 They move, you know. They all play happy and festive tunes and 'dance'. The first year there was this display: 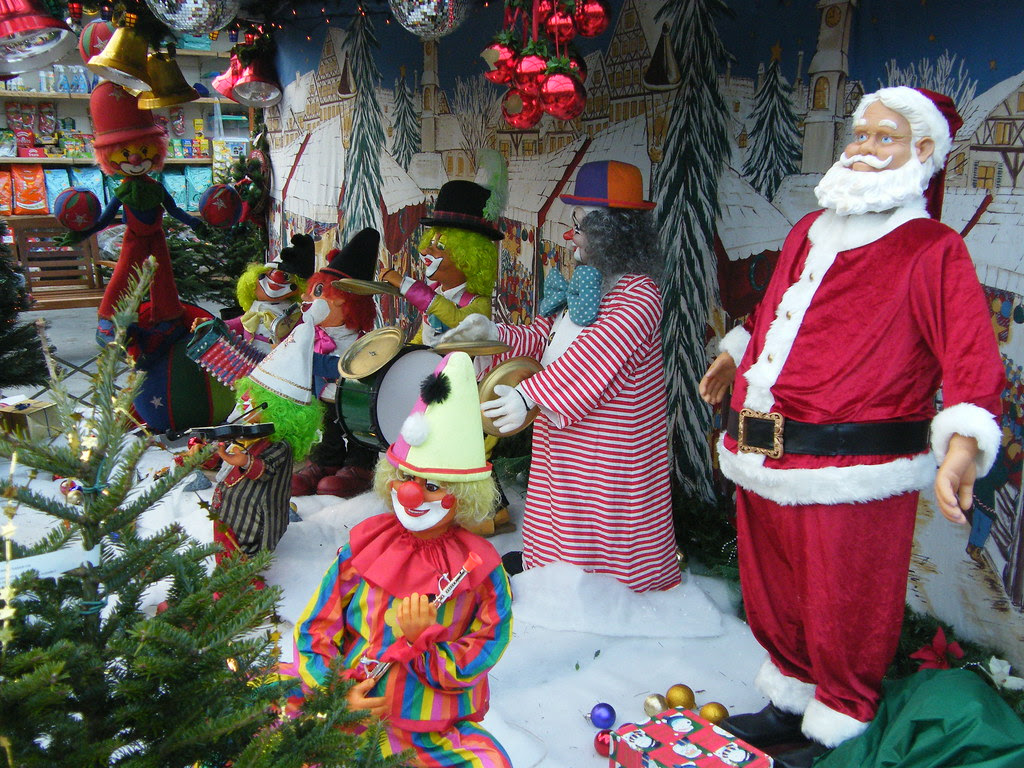 And I swear to you, I swear that the clown at the the front there, it was making rude gestures of the self-pleasuring variety. With his flute. Poor Santa. Look at him there, edging uncomfortably away. Ho-Ho-Ho-ly Shit What The Fuck Am I Doing Here...

But it seems that for decency's sake, they've toned it down somewhat this year: 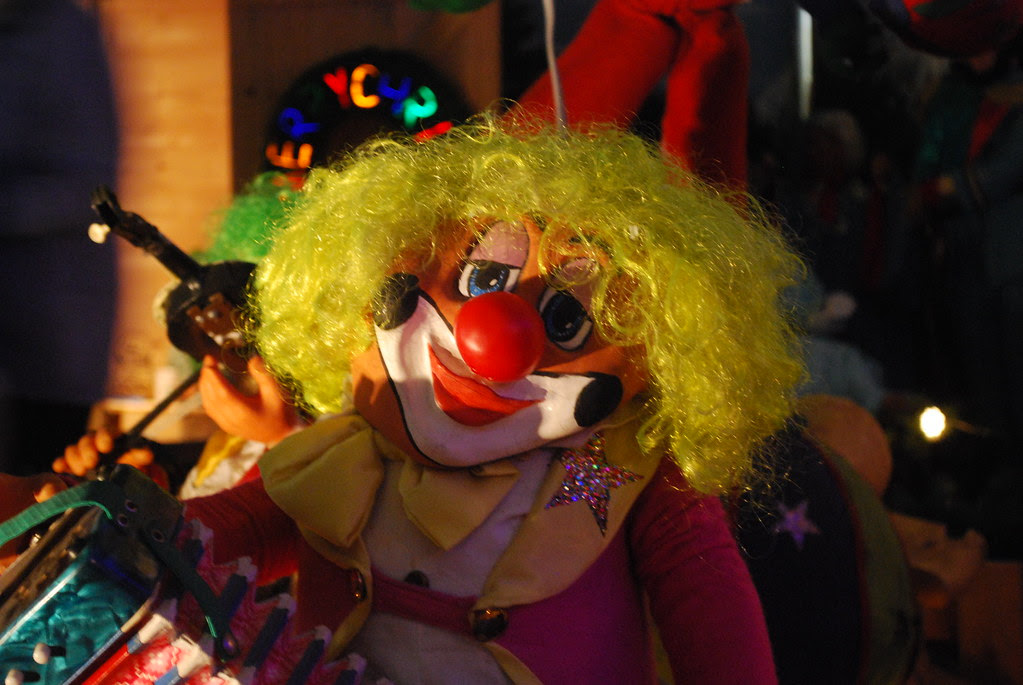 And now the clowns just want to eat your soul.

Outside, though, it's lovely: 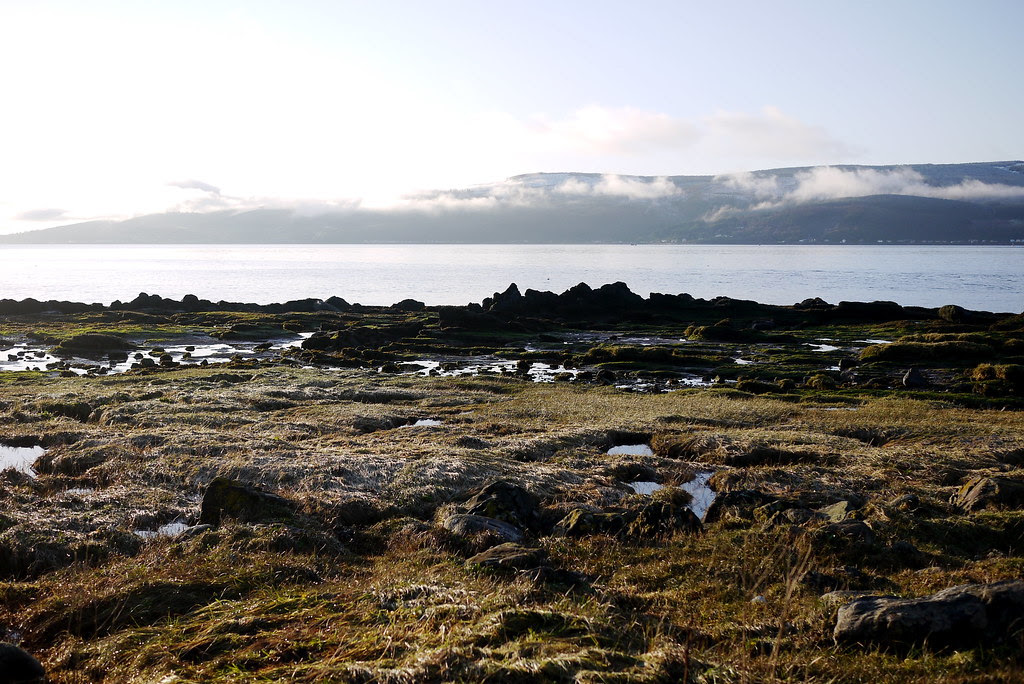 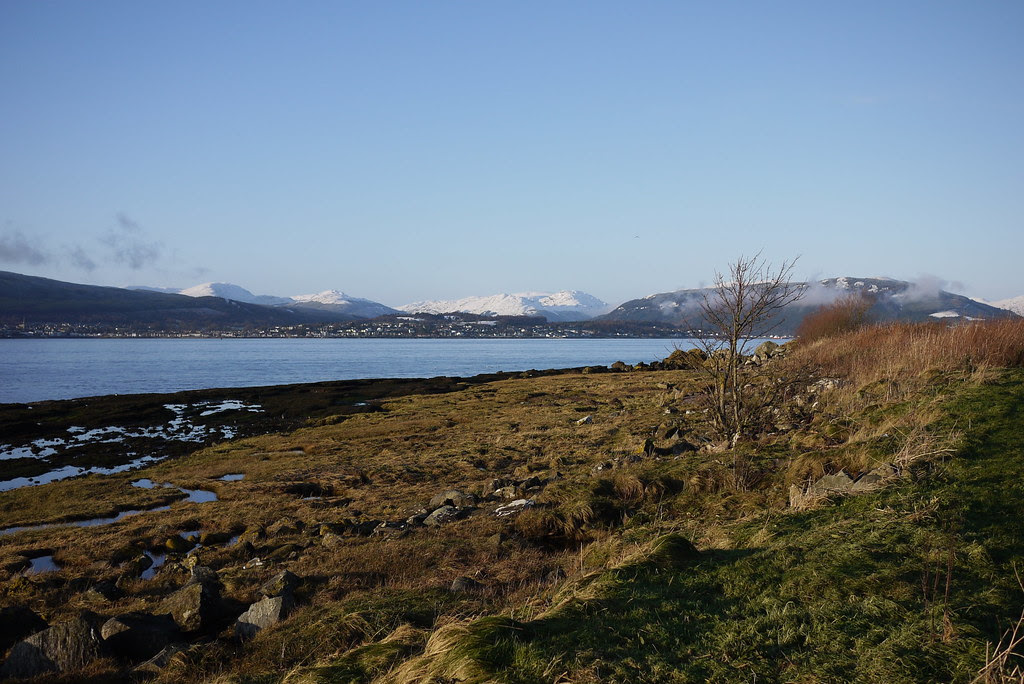 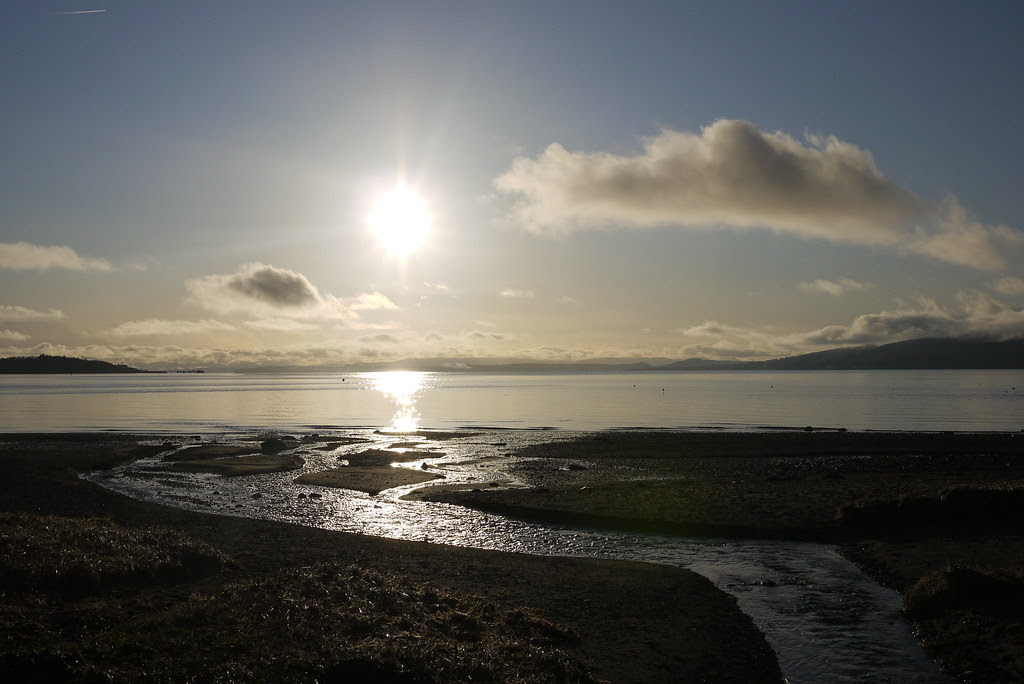 As furious as the Cailleach has been these past few days - snow, hail, sleet, rain, thunder and lightning, sleet, and more snow and torrential downpours - well. It doesn't seem like anyone round here minds.
Posted by Seren at 22:10 4 comments:

Email ThisBlogThis!Share to TwitterShare to FacebookShare to Pinterest
Labels: scotland

This title is a re-release of Logan's Irish Country Cures, so as far as I know they're one and the same just under different names.

Having read another of Logan's books I had a vague idea of what to expect here - a book that's short and sweet, well-written and well-researched, and providing a good overview of the subject. This is pretty much what you end up with in this book; it's a nice little tome that covers as much as possible in as few pages as possible - good for an introduction.

It's a quick read and one of those books that you pick up and put down as you find the time. It's not a particularly demanding read, although given the subject matter there are some things in here that I'm totally unfamiliar with - certain ailments and terminology that I'm not particularly sure what they refer to. Logan himself is a doctor so he writes with authority on the subject of various complaints and treatments, but this is both an advantage and disadvantage, I think. Many of the complaints referred to aren't really relevant today, or else they might be called something else, but they were either well-known at the time of writing, or at least still in living memory at the time; as such, at times there's very little explanation of things that I would've appreciated explanation of (or at least a glossary at the back). Me, I've heard of terms like dropsy, but I can never remember what it refers to...

Aside from that, the book gives a good overview of the subject and with Google handy the more obscure elements of the book aren't too much of an inconvenience. Along with human ailments (which are separated into internal and then external sections) there's also a brief section on animal ailments and treatments, and a short section on folk treatments at wells, spas, and sweathouses. At times the writing almost slips into the kind of style that seems to be note form - brief sentences that are barely grammatical - but at least it keeps things pithy.

The content isn't particularly exciting or revolutionary - to me anyway - and the treatments described aren't exactly ones I'll be trying any time soon...But there are some nice bits and pieces to be found here, and along with learning about folk remedies and attitudes towards illness, Logan does a good job of pointing out where these remedies seem to have a long pedigree - being found in Irish or even Anglo-Saxon manuscripts. This says a lot about the longevity of these treatments, some of which are pseudo-medicinal, some of which rely on sympathetic magic, or else sound medicine and common sense.

There isn't much detail as far as the supposed origins of many of these diseases are concerned - the belief in illnesses caused by the evil eye, for example - and nor is there much detail about who these folk-healers that people often consulted in cases where illnesses didn't respond to conventional approaches. The book is slightly lacking for that, but I think that's symptomatic of the time in which it was written - and to be fair, there still hasn't been much work on that, even today.

Over all, this is not one of those books that I'd say is essential reading, but if you have an interest in folk healing and herbology, then this is certainly a good one for the bookshelf. Given its length, this is a good introduction to the subject, for sure, and you should be able to find it cheaply second hand.
Posted by Seren at 12:13 4 comments: