There's less than an hour to go of this year on this side of the Pond, and earlier there was a partial eclipse of a blue moon. So aside from wishing everyone a Happy New New Year, I thought I'd share a picture I took of a gloriously full moon at the start of the partial eclipse: 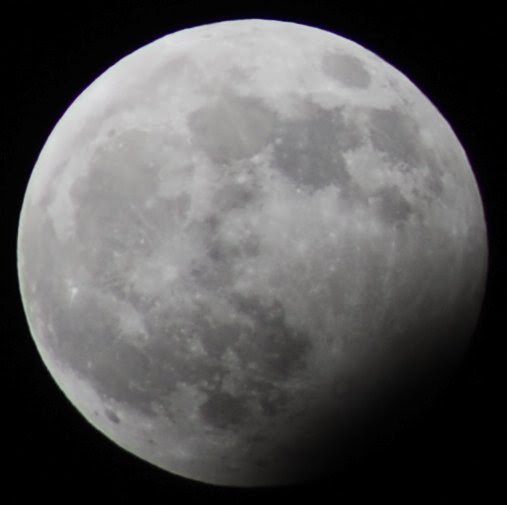 The night is cold and clear so far. Sheets of ice (compacted snow) and what remains of the snow we had a few weeks ago now still lies on the ground. The cold weather shows no sign of letting up, and for once we enter the new year in the grips of a proper winter.

It's not been an easy year, but it's not been a terrible one either. I hope for better, for 2010. After this, I'll start on saining the house with the water I've saved from Bealltainn. I'll have a wee dram ready for the bells, and leave out some offerings before I go to bed, along with a penny to go on the step outside. It's supposed to be good luck if it's still there in the morning.

I also intend to perform some frìth at sunrise, and I'll be baking some shortbread and/or some Yetholm bannocks to take to the in-laws tomorrow, for the obligatory New Year's steak pie. I honestly don't know why it has to be steak pie, but apparently that's the way it is for New Year's Day. As far as I can tell, it's a west of Scotland thing.

A Guid new year to ane an' a',
0, mony may you see,
And during a' the years that come,
0, happy may you be!
And may you ne'er hae cause to mourn,
To sigh or shed a tear,
To ane an' a' baith great an' sma',
A hearty guid New Year!
Peter Livingstone