For a lot of people at the moment, Spring is probably the furthest thing from their minds as they bask in the glories of a foot or two of snow...

Not so here, see: 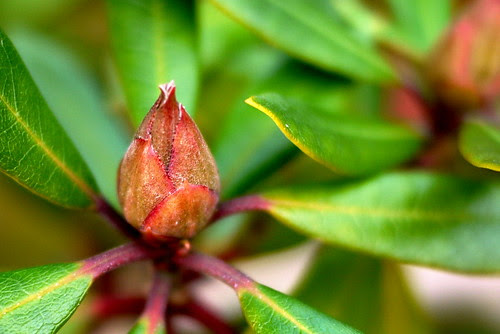 So celebrations began yesterday, in a slight panic because I forgot what day it was until the afternoon and then realised I needed to get the house in order, and things made and readied. The day kind of sprang itself on me. Appropriately enough, I suppose...

As it happened, I'd been having a clearout of the fridge and had some soup on the go (the carrots were getting past their best), and I pulled up the last of the leeks from the garden to go in the pot as well - I pulled up a bunch around Samhainn, I think, after sowing them in June or so (late, because of mild disaster...) but there wasn't much to them then so I left the rest to bulk up a bit. This time, they were a bit bigger, indeed: 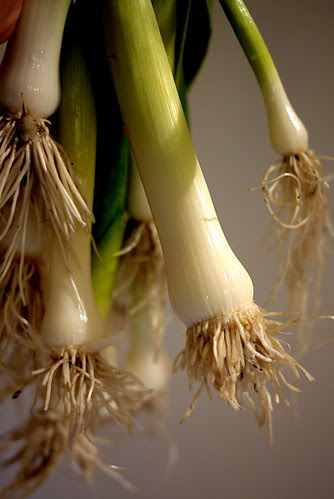 Chop chop, and in they went into the soup. While Tom was still at school, Rosie helped me make some bread to go with it (I've finally got the knack. Mostly...we won't talk about the wholemeal attempt...), and she insisted we should make some fat balls for the birds. They seemed apt, for offerings to the land spirits, so we got some suet, honey and seeds out and melted and mixed it altogether, and Rosie decided we should do a cow and teddy bear shape (with some silicone cake/jelly moulds that I have).

After Tom came home we got on with making the dealbh Bride. Really, we all had a go, so I could show them what to do. We used a kit I found at the supermarket to make them, so we had a choice of pipe cleaners, beads, wool and decorative bits to pick from, plus a few extra bits from our craft box. Tom did well with his, and did most of it himself (I put the arms on and helped with the hair but he did everything else) and felt all grown up, while Rosie found the making part a bit too fiddly, so she mostly just decorated hers. Fun was had, mess was made, and here's what we ended up with: 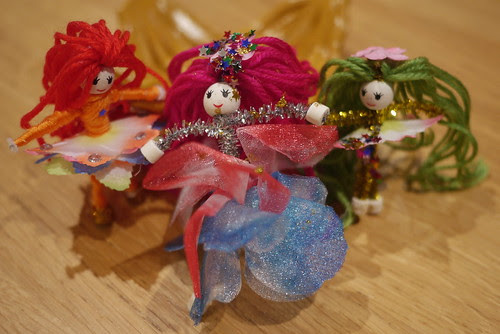 Rosie's is in the middle (with the pink hair, of course), Tom's is to the right (with the green hair, of course), and mine is to the left. Knowing Rosie would want to play with hers, I decided to use Tom's for the ritual later on. First, though, there was butter that needed making, and bread that needed baking, and chocolate that needed melting (for some mousse. "You can't make mousse with real moose, can you mummy? That would be silly!" said Tom sagely. It would, Tom. Quite right.).

The butter took a lot of hard work, but once again I was helped and encouraged by the kids, who also took a turn or two to shake the cream, and we all sang for the lumps to come. I said this charm, too, but I've not been able to listen to the song because the website doesn't like my macbook too much. Ah well. We eventually had success, although it seemed to take longer than usualand I did get a bit worried for a wee while. My arms got a good workout, though.

We had a busy weekend so hadn't managed a trip to the supermarket and the cupboards were nearly bare, so instead of a good roast that I'd intended, I had to make do with whatever I could find at the village shop. I got some sausages made by the local butcher (they're really good), and did the obligatory buttery mash (with our own butter, and some of the buttermilk as well), and put some veg on. I'm not usually very good at mash - it tends to end up as slop, rather than mash - but I bashed 'em good this time and I took that as a good sign. For me, it's nearly a miracle.

Everyone had the bangers and mash, while I tried the homemade soup, bread, and butter: 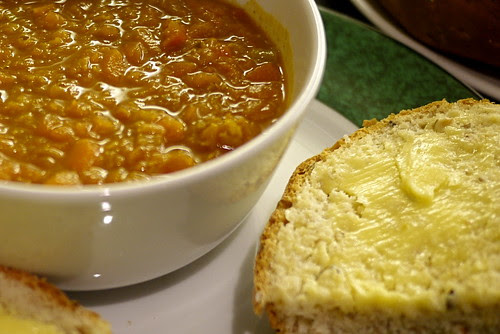 OK, and a sausage or two as well. The soup was carrot, red lentil, ginger and honey (with the leeks, an onion, a good bit of paprika, and chicken stock, and whatever else I chucked in that seemed a good idea at the time). It was maybe a little over-gingered (Mr Seren disagreed), but I have to say, I was quite proud of myself with how it all turned out...

After the kids had gone to bed, I got down to my personal devotions. Over the weekend I decided to have a go at making a clay basket/bed for the dealbh Bride, but it still needed painting, so that was the first thing to do. I had a few ideas of what I wanted to do with it, but in the end I doubted my abilities to get too elaborate, and kept it simple: 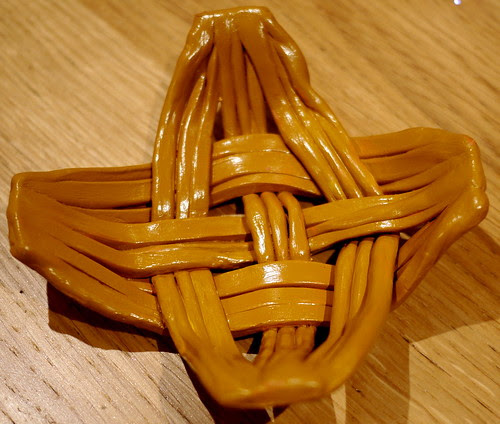 Some might call it a bit wonky and lopsided, but I think I shall call it bespoke.

The paint dried quickly so it wasn't too long before I could get down to business. There was candle lighting, offerings, praises, devotions, and Bride being invited in, and the dealbh Bride being laid to bed with her wand (and applewood wand I was given by a friend some years ago now). When I opened the back door to invite her in, I had a go at doing it in Gáidhlig, and as if on cue, one of our cats (Grumble) came running in. Well. Hello.

While I was out getting Tom from school earlier, Mr Seren had been entertaining Rosie by playing with some of the wool from the dolly kit I'd bought, and he'd tried making a hair braid for her (what little hair she has is too fine for that, though). Rosie loved it though, and declared it a 'fairy catcher'. That gave me the idea to make it into a rowan charm for the kids' room, so I got one of the last bits of twig I have in the house that I collected a while ago, and some animal charms I've had lying around for a while now. I tied on the rowan to the piece of red wool, and put on a cow, a sheep, and a black cat. Mr Seren had put on the red feather already, at Rosie's insistence (the bag of feathers exploded in the cupboard under the stairs a while ago, and Rosie's obsessed with them and keeps managing to conjure them up from odd places she's stashed them). And lo: 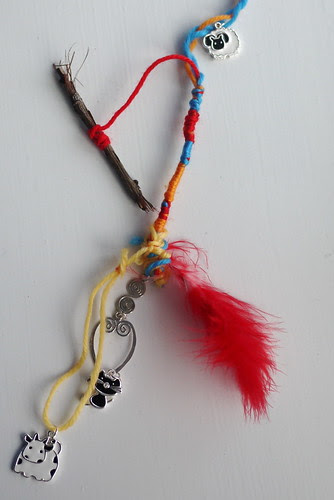 I said a charm over it, asking Bride for protection, while I fiddled about fixing the bits on. It occurred to me that the silver was a happy coincidence, given her associations with smithing.

That was it for the evening, I think. I left Bride's portion of our feast, with the remaining buttermilk in the oven (away from the dogs) and took myself off to bed and a deep deep sleep. This morning dawned bright and sunny, and while it had been windy the day before, all was peaceful and quiet. As I went to the door to look for any signs that Bride had visited over night, who should appear as if on cue, but Grumble again.

Before breakfast, I got a stocking and some soil from the plant pot on my hearth shelf (since I have no peat- or real coal-fire to use), and went out to give it a good pounding and said:

This is the day of Bride,
The queen will come from the mound,
I will not touch the queen,
Nor will the queen touch me.

I interpret it as a sort of treaty, in a way, a treaty of non-interference that as I work the land, the spirits of the place won't harm me or the crops, perhaps.

Later on in the day, after rain, hail, sleet, and rainbows, I consecrated the seeds as I intended, and Rosie and I put out our cow-shaped bird seed to finish off the day. The offerings I put out the night before have all gone, so they seem to have been accepted, and all in all I'm left with a feeling of near-completeness, now. There's just one more thing to do, and that's our Spring picture to replace the winter snowmen (and oh my, did they turn out to be apt).

Spring is coming. And frankly, I can't wait.
Posted by Seren at 22:45 3 comments: Links to this post