I saw this listed on one of my late night trawls of the internet and seeing as it was going cheap (and I was bored), I thought what they hey and clicked a few buttons and hey presto. It landed on my doorstep with a delicate thud a few days later. 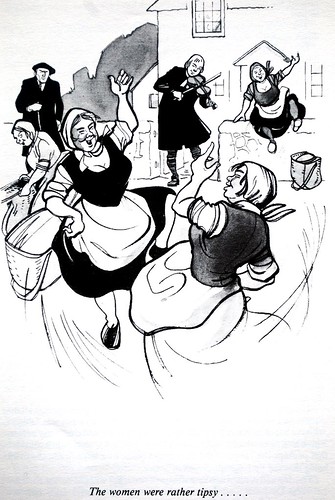 I have to illustrate this review because the book itself is illustrated - generously throughout and to charming effect. And by 'charming' I don't just mean quaint, I mean to the point where some of them give me the giggles. The example given is one of my favourites, illustrating a story about a priest gifted with the two sights who happens on a bunch of women, somewhat worse for wear in the street after selling their fish at market and investing the proceeds to lubricate their dry throats. Raucous though they are, instead of reproaching them and disapproving of them as the church elders did, the priest brings out his fiddle and plays music for them to dance to. Merriment ensues. When questioned about his conduct, the priest tells the elders why should he not follow suit of the angels who were preparing their harps in heaven for one of the women in the group (and sure enough, she died within a week). Which is a typically cheery tale of seership, it seems.

Another of the pictures worth seeing is one of a witch, topless but cupping her breasts for modesty (and almost succeeding, were it not for her generous proportions) whilst looking decidedly pissed off at the devil-like fairies who'd congregated for the annual review of all the witches, warlocks, fairies and wizards of the area at Bealltainn.

It's more of a booklet than a book - very short at around 50 pages - and with all the illustrations it's hard to tell who the book is aimed for. It's short and sweet and very straightforward, so my guess would be for older teens still in school, or as one of these fairly throw-away books that often get sold in touristy shops. Either/or, really. Its simplicity and conversational tone make it an easy read, but at the same time it's a little too simplistic to be useful in some respects; no references are given at all, except a passing mention of a particular author like Martin Martin, nor are there any page numbers or a bibliography. This is a shame because for the most part it seems to be well researched, and there are even bits that I want to follow up about bannocks being made on Lewis at Bealltainn in the twentieth century.

The book is split into three sections - the first looking at the smugglers, the second looking at the second sight (aptly enough), and the third dealing with the superstitions of the title. In this case the superstitions are concerned with the seasonal festivals, and Thompson takes a brief look St Bride's Day, Shrovetide, Yule/Hogmanay, Samhainn and Bealltainn; the lack of any mention of Lùnasdal/Lammas is odd considering it was published in 1980, though. This section and the section on the second sight are the most relevant, but the first section gives some entertaining tales and a sense of the humour that could be found in hard times. For the most part there's nothing new to see in the third section on superstitions, and it suffers a little in that Thompson seems to go with the idea of everything harking back to the druids like McNeill does in The Silver Bough, but otherwise it goes into all the usual stuff you'd expect.

I found the section on the second sight to be very informative for what it was - I'm up to speed with the Brahan Seer in a vague sort of way but this helped give me something more concrete to go on, and Thompson was keen to stress that the Brahan Seer is not the be all and end all of Scottish prophecy (hence the tale illustrated above).

If you're looking for a straightforward overview then this book fits the bill if you're willing to put up with its faults. Although if you're not that au fait with terms involved in distilling whisky, like barm, then you might want a dictionary or google handy on occasion. The lack of references is frustrating though, because otherwise it would have been a really good book to recommend for beginners, for the introductory material and then the pointers to further sources. As it is, I'd only really recommend it if you stumbled across it cheap and thought it might be good to get an idea of some of the basics of second sight and the festivals in Scotland. Really, The Silver Bough or The Gaelic Otherworld is what you want, but at least this is a lot shorter so it could serve as an experiment to see if you're interest was piqued enough to invest in more expensive books, I suppose.
Posted by Seren at 09:01 No comments:

Bealltainn's fast approaching and my thoughts are turning to what I'll be doing for it this year. Looking back on what I did last year, it all went pretty well so I'll be sticking to the same basic formula, I think. My only reservation was skimming the water from the tap last year; I knew of the practice of skimming the well in Ireland, but wasn't really sure if it was done in Scotland. I've since found mention of it in County Folklore Volume VII (page 16, if you have a burning desire to look it up yourself), with reference to Fife:

“In May, 1723, the minister informed the Session that Margaret Robertson in Byres of Balmerino had complained to him, that James Paton in Culter 'had scandalized her in her good name by saying that she went to Nine Wells on the Road-day [I.e. Rood Day, the Invention of the Cross, 3rd May] to take away her neighbour's milk,' or, as the charge was afterwards expressed, 'to get the cream of the water, and to take away her neighbours butter.' ”

Which seems to indicate the practice had shifted to a more acceptably Christian date, like various practices appear to have done in other places, too, and accords with the idea of collecting the first skim of the water in Ireland to ensure an abundant milk supply (and general abundance) in the coming year, as well as preventing others from stealing it from you.

So that's one thing I'm more certain of. I think I'm getting the hang of the bannocks as well, but I've still got a few recipes to try out. I made a shortbread-style bannock for Latha na Caillich a few weeks back, which were well-received as offerings along with the best bits of a lamb roast. I'm going to make a different type of bannock for Bealltainn, though (I stuck to a traditional oaty one last year, which came out well, but I'd like to find something the kids like so I can share it), and today I had a trial run at it.

This time I tried Yetholm bannocks, which are like a shortbread, with a layer of crystallised ginger in the middle. They're quite sweet and the ginger gives them a yummy festive kick, which suits my tastebuds just fine, and they have a very light and crumbly texture if you try them while they're still hot. And they're supposed to be glazed with a caudle of egg yolk and milk, which seems apt for Bealltainn. They turned out pretty tasty - the tastiest I've done yet, I think, although Tom and Rosie weren't too sure. Mr Seren enjoyed his after brushing off the flaked almond; he's not that keen on almonds.

The recipe dictates that the dough should be rolled out into rectangles with the ginger sandwiched between them and they're then cut into fingers once they're cooked, but once I'd trimmed the edges to neaten them off I had plenty of dough left to make a bonnach fallaid, which I shaped into a more traditional round. I've left it as an offering outside for the Good Folk. After we all had a good taster I was going to use any leftovers for offerings to my ancestors tomorrow, on the anniversary of my Grandpa's death, but there's only one piece left so I think I'll have to make some more (what a hardship!). It's my other granddad's birthday a few days later so it seems like a good time to give myself a kick up the arse and start focusing on my ancestors a little more. Hopefully it will give me a good opportunity to think about where I should be going with this side of things.
Posted by Seren at 01:37 No comments: