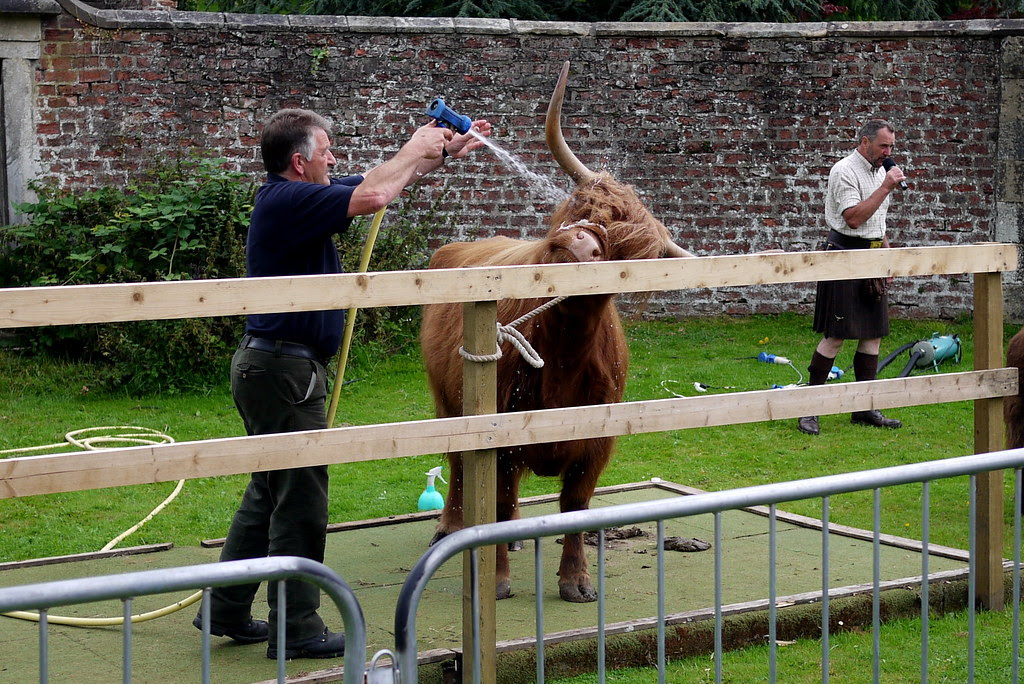 Susie likes having a good wash. She's a show heifer, so she needs to look her best before the judges come and see her. Today she only had a shampoo and blow-dry (no, really), but usually she'd have a bit of conditioner rubbed in too. Timotei is the best, apparently. It takes about 5 litres per cow. Coo.

We met Susie (Siusan) today at a family event in Glasgow, along with some of her friends. And her daughter, also called Susie: 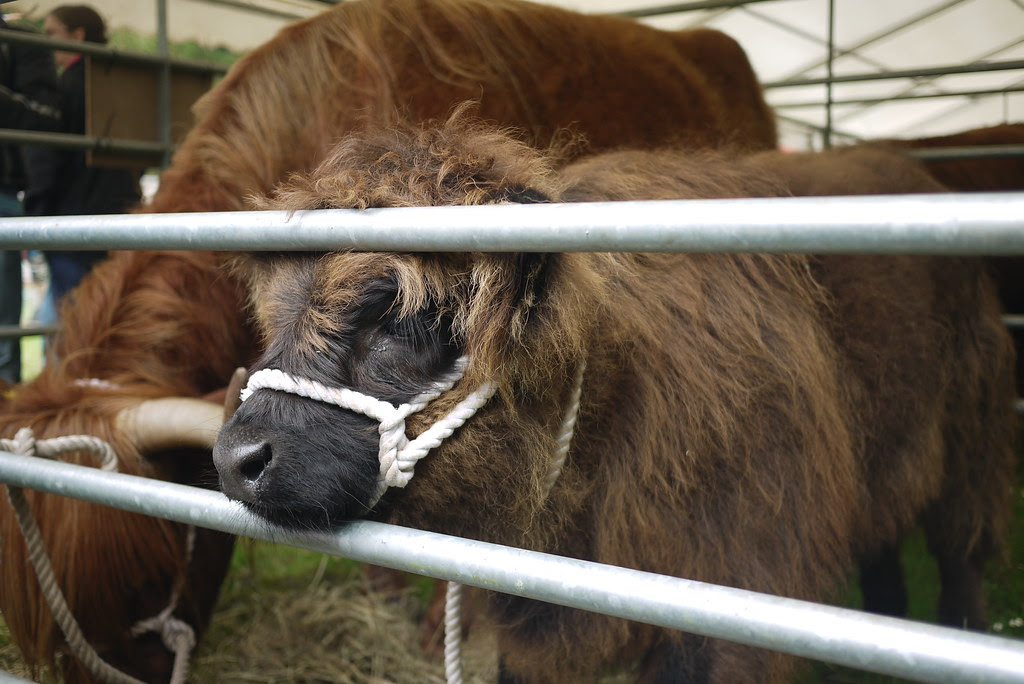 Mum is Susie Ruadh ('red'), while daughter is Susie Dubh ('black'), because one day this wee calf will end up black all over, just like her dad. Susie Dubh was only born in April, while I think her mum must be at least four or so.

Susie Dubh lapped up all of the attention and enjoyed a good scratch or two, especially on her chest and all the hard-to-scratch places a cow might have (at the front anyway!). They have very soft and thick coats. I could've petted them all day.

This is their friend, Una Ruadh: 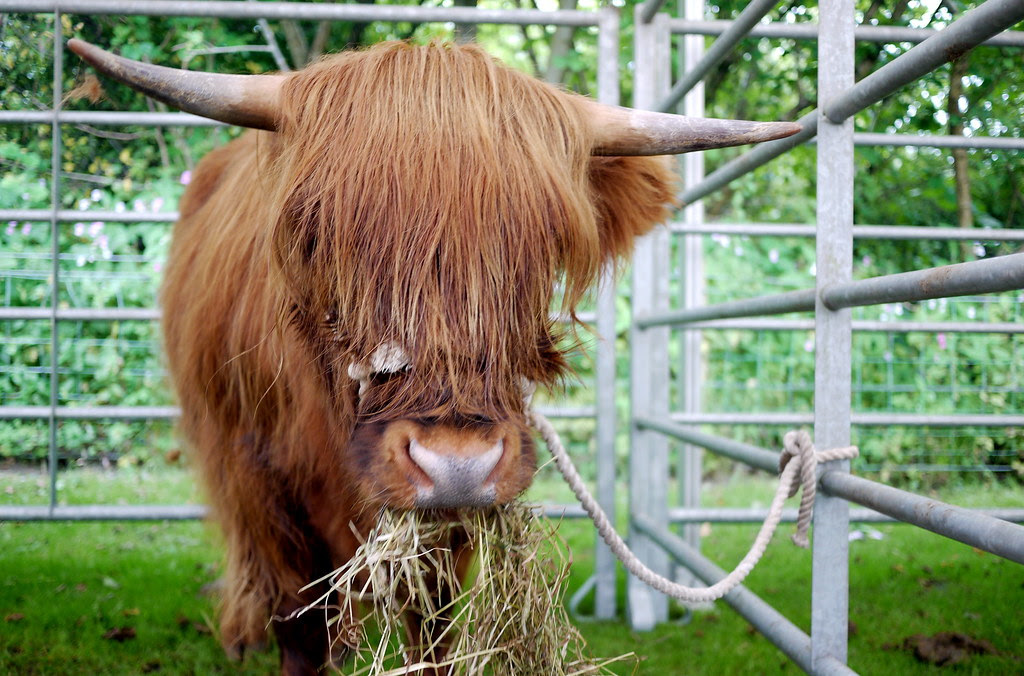 In addition to a good bit of grass or hay, it seems they enjoy nibbling on zips and licking body warmers given half a chance. One little girl was horrified when she realised that her beautiful purple body warmer was covered in cow schleb. It seemed rude not to point out what the cow was doing to it once I noticed...

I don't think I noted this one's name down: 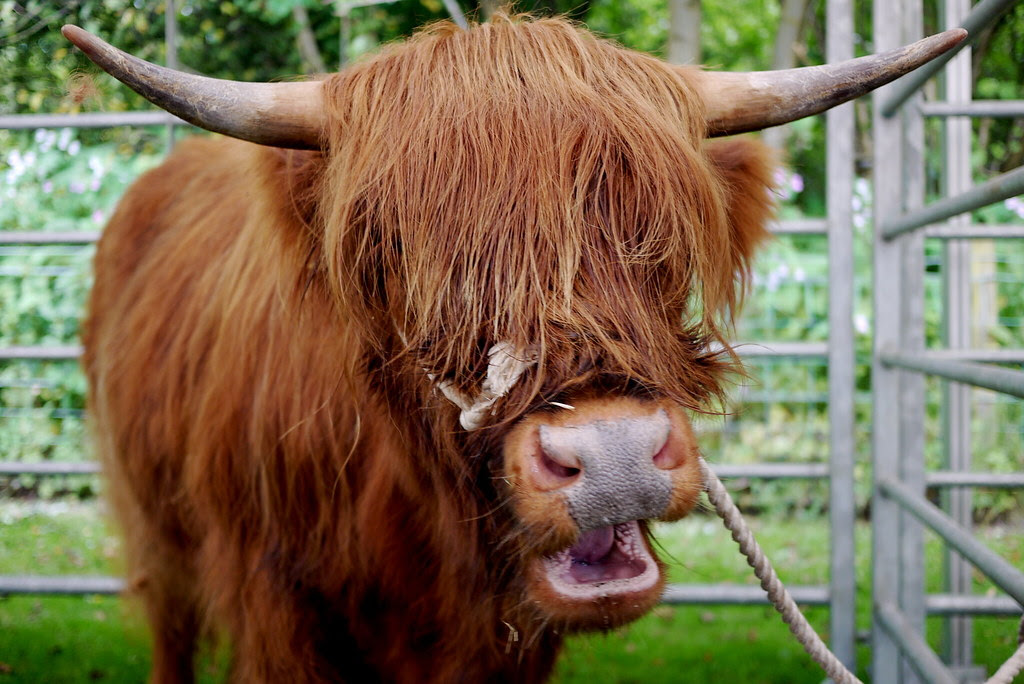 She's only a yearling, and is obviously unimpressed with being shown off to the great unwashed. Some of her friends had a little adventure recently, after a dog walker let their three dogs off their leads to run rampage through the country park where the herds of Highland cow's graze. As a result of the dogs giving the yearlings some unwanted attention, several took fright and stampeded, taking down fences and hedges until they ended up in the south-side of Glasgow. I think seven managed to escape from the park and end up in the city, and one of them apparently even wandered into a mechanic's garage, damaging a few cars before being rounded up safely and taken home (imagine explaining that one to the insurance company!). Luckily, none of them were injured, just a little freaked. If this is one of the heifers involved, she's not telling. She's feeling a bit coy: 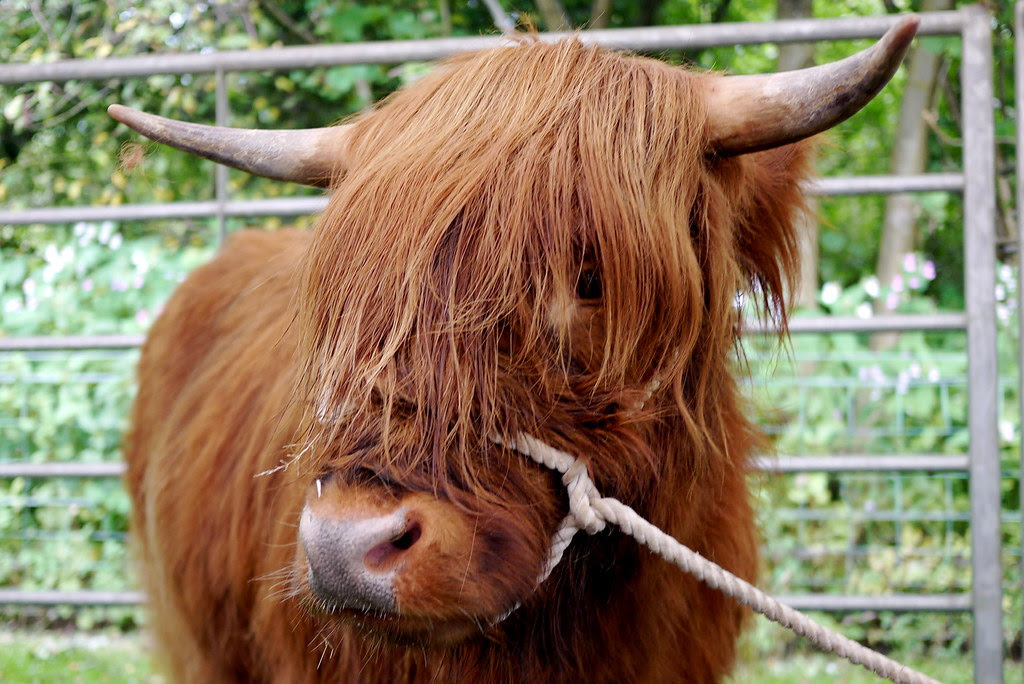 The heilan' coos had a few friends along too, including a very chirpy-looking Anglo-Nubian goat: 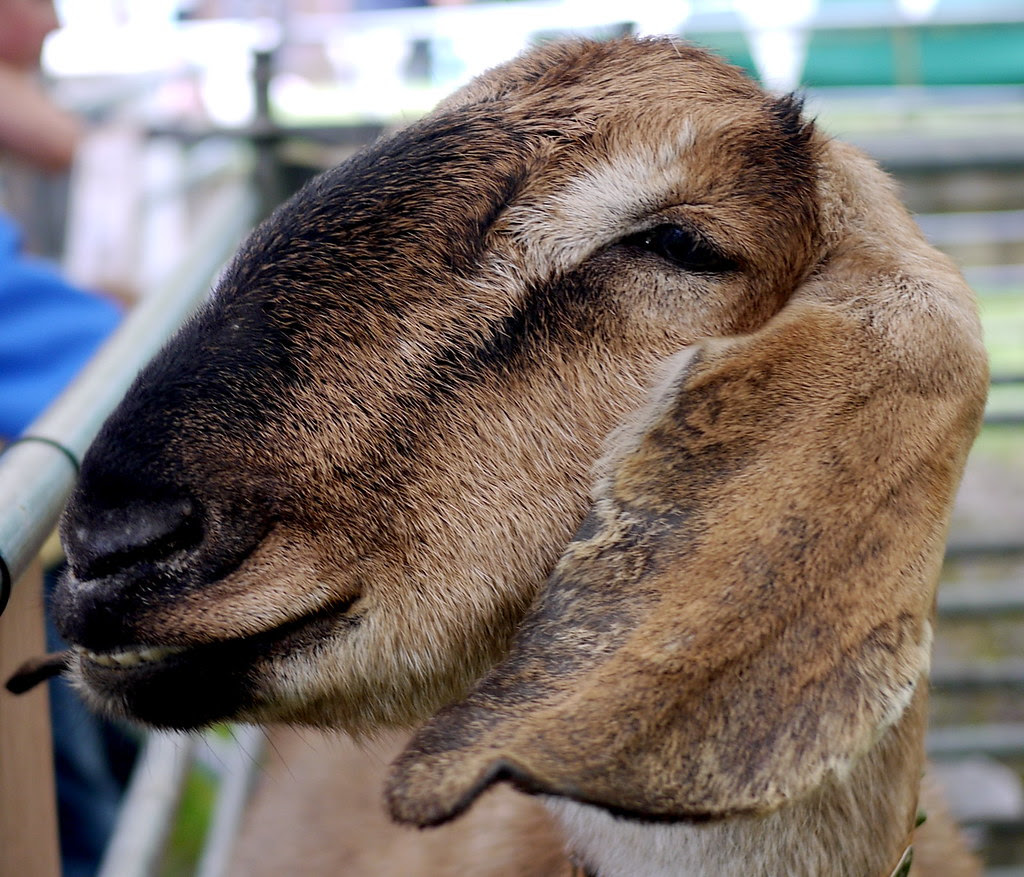 And a Welsh badger-faced lamb: 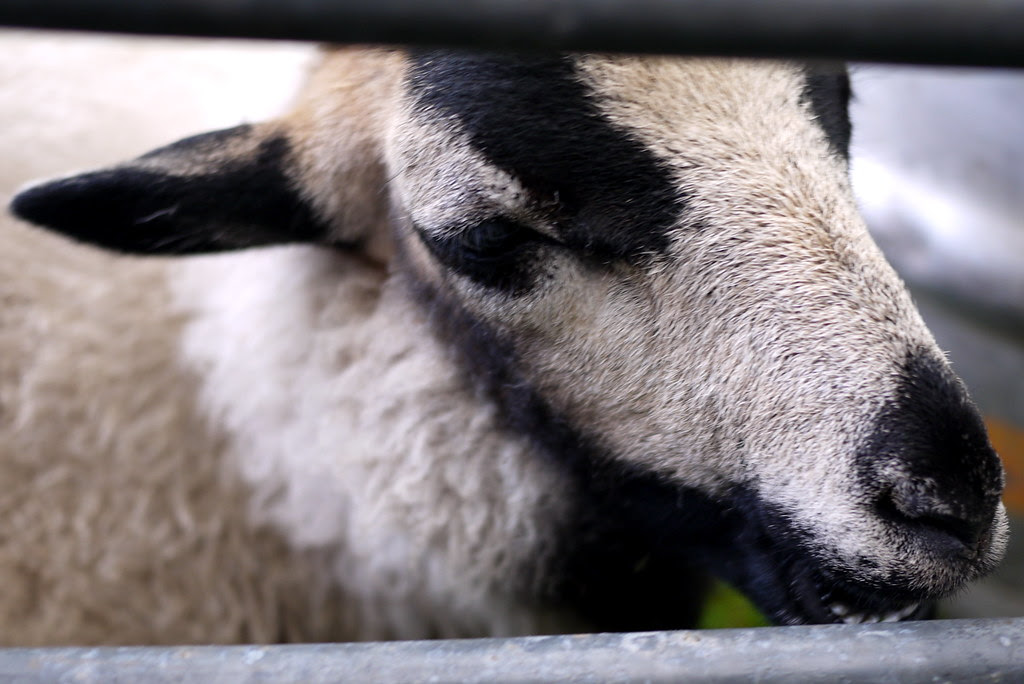 For once, I met some horses that didn't hate me - these were Clydesdales, called Duke and Baron: 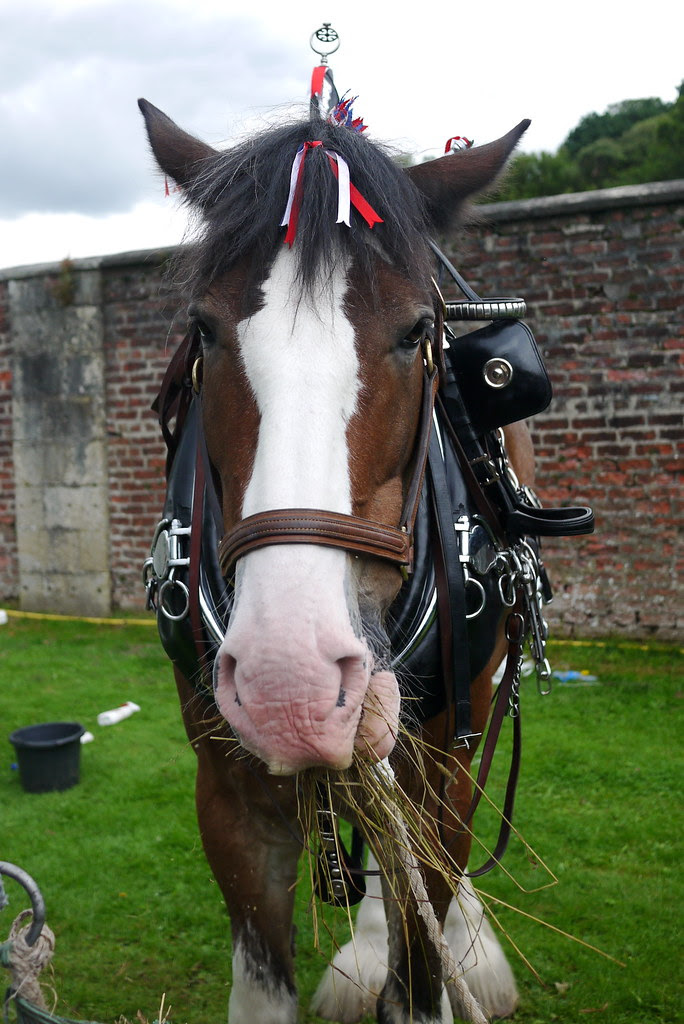