An update for Tairis with added plagiarism (again...)

Là Fhèill Brìghde arrived, and our little household welcomed in Brigid, and the Spring with ceremony and feasting. Rosie did the honours with making our dealbh Brìde this year, which now takes pride of place on the shrine in the kitchen, and she also took charge of inviting her to come visit us. Brigid was welcomed with the words of a very shy, but excited, ten-year-old.

As I posted a while ago, last year, I bought a mould with the idea of making some small candles, and I finally got around to having a go at them. For a first effort they came out pretty good, I think, in spite of the bubbles (I need to regulate the temperature of the wax better, I'm guessing is the problem). I tried out a few colours and the kids are still debating which ones they like the best. I think Rosie did a fantastic job with our Brigid doll – she made several and then picked out the one she thought was most appropriate for the occasion, which she kept under wraps until the big reveal: 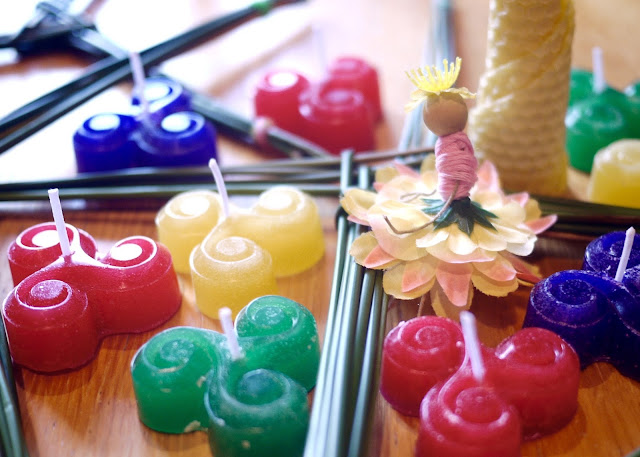 We also put out our brat for Brigid to bless, and Rosie chose to put out a necklace she got for Christmas this year, so she has something she can carry around with her.

I made a few crosses while the kids were at school, and then when Rosie got home she decided to join in. I helped her make a three-armed cross out of rushes, and then she had a go at some more out of pipe-cleaners. They really are easier for kids to work with, though I have some reservations about the metal in them. If it contains iron, it kind of defeats their purpose, you know? But still, they weren't the only ones we made, so it's OK. The different colours helped Rosie keep track of where she was, as she tried her hand at a four-armed cross for the first time: 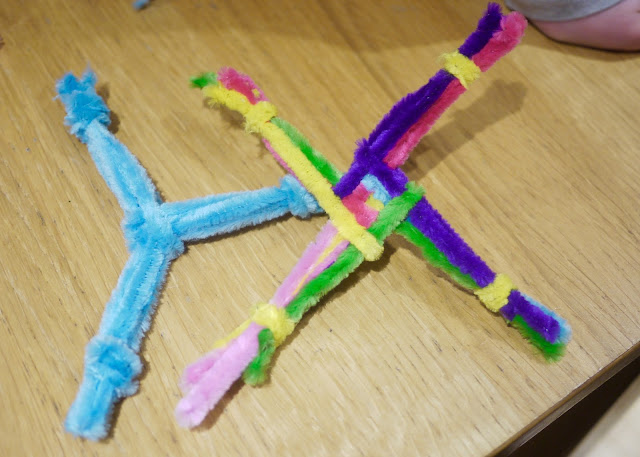 I felt like mixing things up a little so decided to try my hand at something new this year. I've made three- and four-armed crosses most years, as well as the "diamond" type crosses I grew up with, so this time I figured I'd try making a style of cross I've never made before. I settled on the "interwoven" type, which is when, during some searching for images I could work from as a guide, I found a web page that's plagiarised my own page on making the cros Bríde (or crois Brìghde, if you want to Gaelic it up). So that's nice.

On the plus side, it helped me realise that the type of cross I was looking to make was wrongly described on my own page, which has followed through on the plagiarist's page and had a knock on effect in wrongly describing other crosses as well (the Bogha Bríde is a cross inside a circle; they've shown the interwoven type as a Bogha Bríde instead). So I've corrected my own page and I apologise for the confusion, folks. My bad – I think an older source I looked at used the same term to describe an "interwoven" cross (referring to multiple crosses woven together) as other sources did to describe something else (the type of cross I was actually looking to make).

On the negative side, I'm a tad bit annoyed that once again someone is using my words to sell their own religion... I mean, come on. If you want to write about something, use your words! Do your own research! I suppose they at least acknowledge the original source this time, and haven't gone so far as to prevent other people from copying text on their own web pages because they don't want people to do to them what they do to others themselves. Like my previous plagiarist did. Twice.

It's still frustrating, though. And fucking rude. I could report the page with a DMCA takedown notice, but that requires giving my personal details, including home address etc, which is then publicly available online, and that sucks. You can be sure that negative comments to the blogger herself are ignored.

Still. Besides updating the original page, I've also added a new page on Tairis with a guide for making the interlaced or interwoven cross. It's an easy cross to make, with a little bit of preparation, and Rosie had a go at making one, too. I tried a simple version with only three strands along the horizontal and vertical (as did Rosie – in the picture below), and then I tried a bigger one with five strands each – that was all I could fit in, based on the length of the rushes. 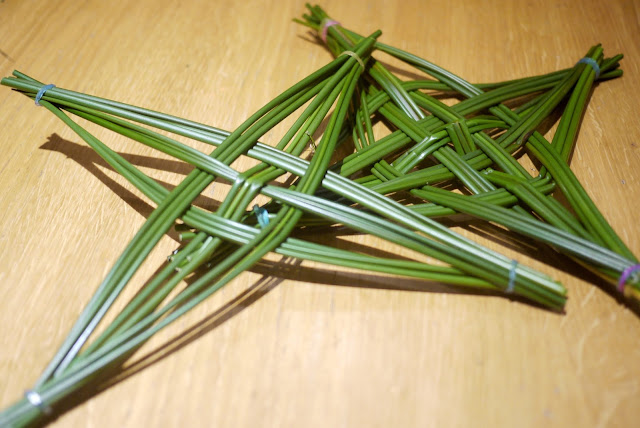