The end is nigh!

So as usual I have all of these plans for things to do and be all spirichual, and two snottery children hacking up chunky stuff and complaining about their ears come along and pretty much scupper all of that. Which was fun.

Not surprisingly, there's not much been done on the whole sprucing and preparing front, then. As yet. In fact, I haven't even had the chance to get any obligatory presents for their teachers or friends for their last day of school today. Rosie was back at school yesterday (just in time for her Nativity play, and to meet Santa; but not the real one, Rosie wisely informed me. He was clearly a fake Santa) and Tom's gone back in for the last day today, so I should be able to do a little bit of organising today. Thankfully - as yet - whatever horrors the kids were subjected to haven't manifested in their snottery glory in myself. But all in all we've had a wee celebration for the season, which coincides with the end of term for the kids, so it's doubly festive for them. From now until Tuesday they'll be pretty much bouncing off the walls and strewing the front room in Lego in anticipation. Yay.

In the meantime, with the kids not having much of an appetite lately and a shitload of buttermilk about to go off in the fridge, I decided it was as good a time as any to try some drop scones (or Scotch pancakes, if you will) last night. I've never had much luck with them, but having an old recipe to hand that I've not tried before, I figured it was worth a go; the recipes using milk just never seem to work for me. But these: 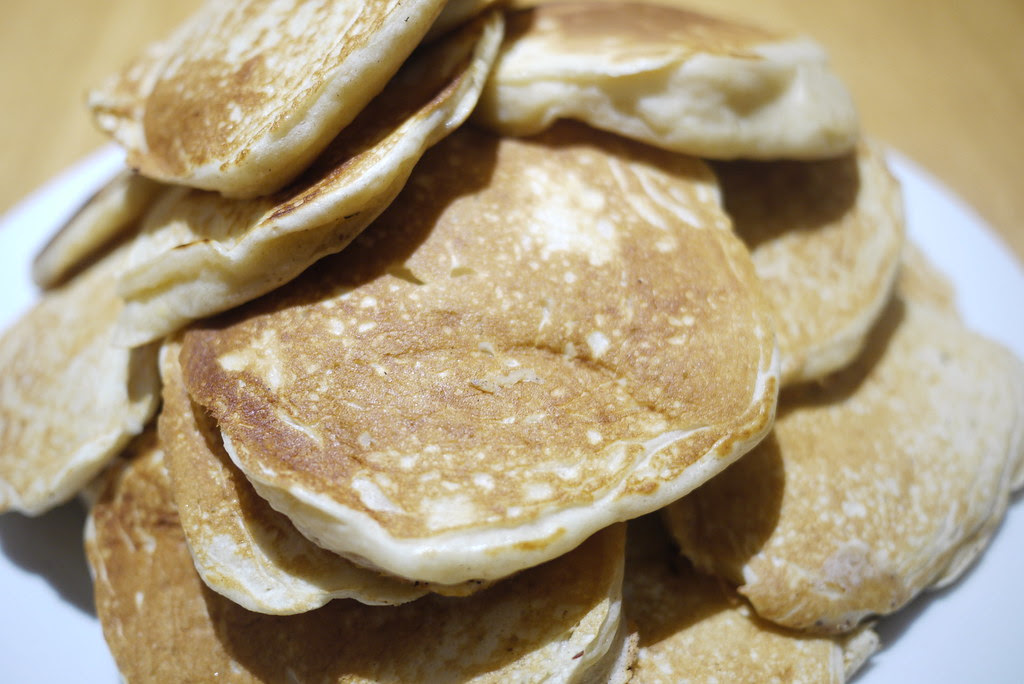 Oh yes. These came out quite nicely (cooking-wise I consider this a personal triumph; drop scones have been my final frontier, as it were). Mr Seren was out so it was just the kids and me for our impromptu Midwinter eve feast, with a choice banana, honey and apple (a pretence at being healthy); I was initially going to do a proper dinner but the recipe left me with so much batter I figured I might as well make the pancakes the main course. The kids were extremely impressed, and have declared that we should have them for dinner at every festival; I suggested they shouldn't count on it, though. I saved some for breakfast this morning, and set some aside to put out as offerings too, just as the day was dawning (and the world really wasn't ending, unsurprisingly).

I'm not sure what the weather's like in Ireland but if it's anything like here then once again the sunrise at Newgrange will have been dull and cloudy. There's still time for the cloud coverage to clear for the sunset alignment at Maes Howe, though, but the pictures from there so far aren't looking too hopeful on that at the moment. Maybe next year?

If you're feeling festive and looking for inspiration, I've put up an Old Irish poem for midwinter over on Tairis Tales, and Treasa has a great post on things for Gaelic Polytheists to do, and discussing the relevance of the festival to a Gaelic focus. Kathryn points to the Morrígan's (or Badb's) prophecy, which mentions Newgrange (or Brú na Bóinne), and which we recently published in our prayer article, while Nefaeria has posted a run-down of some things too, including a video on mumming and guising that I haven't had a chance to watch yet, but looks good.

Whatever you're up to, have a good one!
Posted by Seren at 10:17 No comments: