I for one welcome our new carroty overlords... 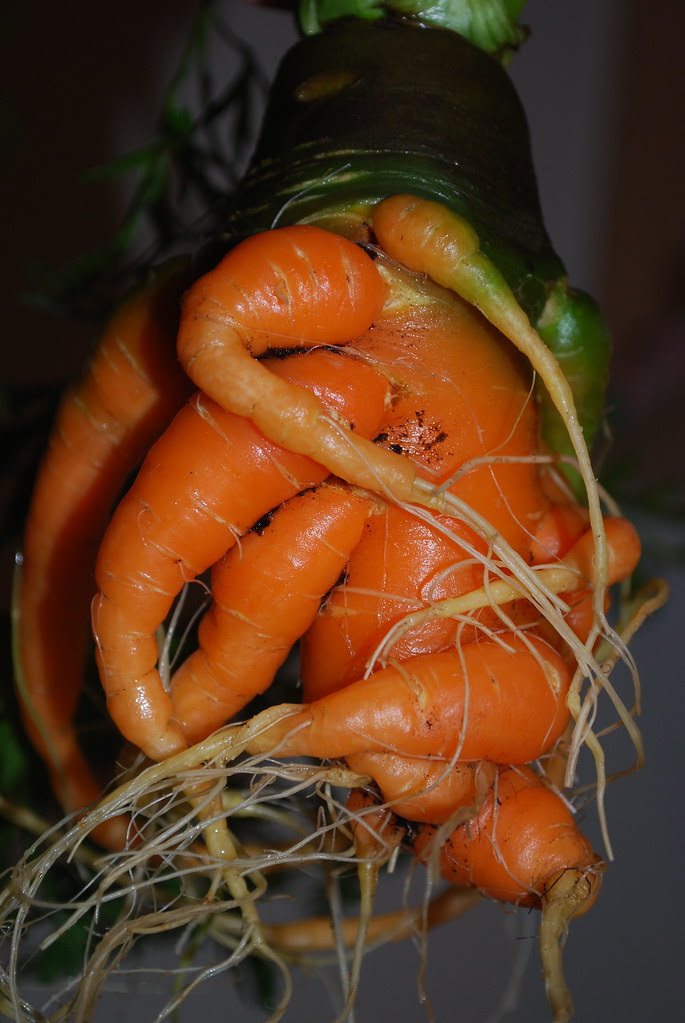 A couple of the carrots started to flower - which I wasn't expecting because I was under the impression that they didn't do that until the second year - but I figured it was time to pull them, and this is what I got. Using the power of Google, and then my sister imparting the sum total of her knowledge of carrot-growing ("You've got to pull them in the evening!"), I made sure to do just that to avoid attracting carrot fly. And promptly got attacked by the wee midgie feckers instead. Bastards. But no pain, no gain, I guess. I got a modest crop in the end: 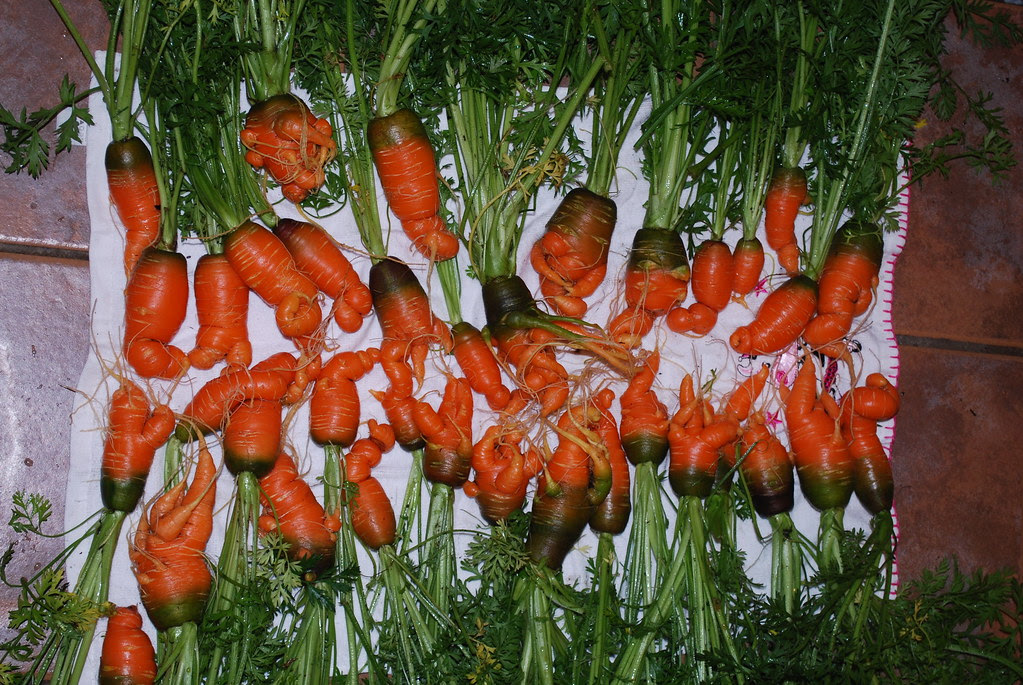 Only a few got munched on by something, which caused them to split right down the side. Most of them are impressively mutoid due to my own fault - being too shy to thin them out in case I killed them (because the kids helped sow the seeds I didn't always manage to make sure there was only one seed per pot). And I suspect I didn't water them enough during the drought last month - it was very hot and dry, and even watering them twice a day wasn't enough, it seems. You can see where they've had a last minute growth spurt once the incessant rain started again this month. The corkscrews, like this: 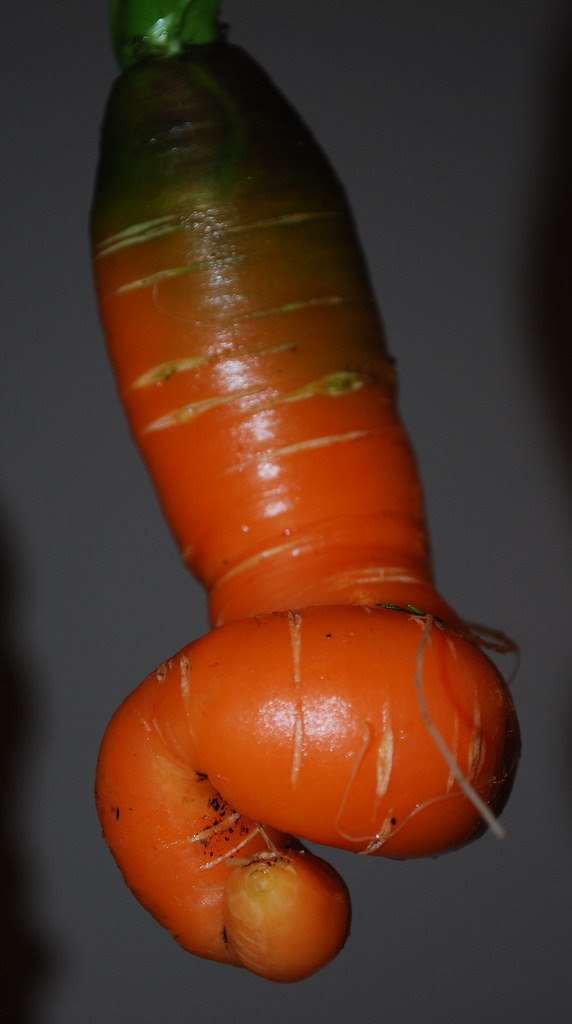 ...I would guess are the result of being grown in the bags and just running out of room. They're tasty either way, but having shown Rosie my proud efforts, she flinched and ran off, commenting, "I don't like them, mummy, they're scary!" Tom, on the other hand, decided, "They're all quite funny! ...Hey, this one looks like an octopus!"

I have a batch of seedlings to put in today, in the hopes of getting another crop out of the growing season. And this time I've thinned them out.

Having bonded with my neighbour a bit over our respective vegetable gardening, I put in some radishes at the last minute after Jim told me they were quick and easy to grow. He wasn't wrong: 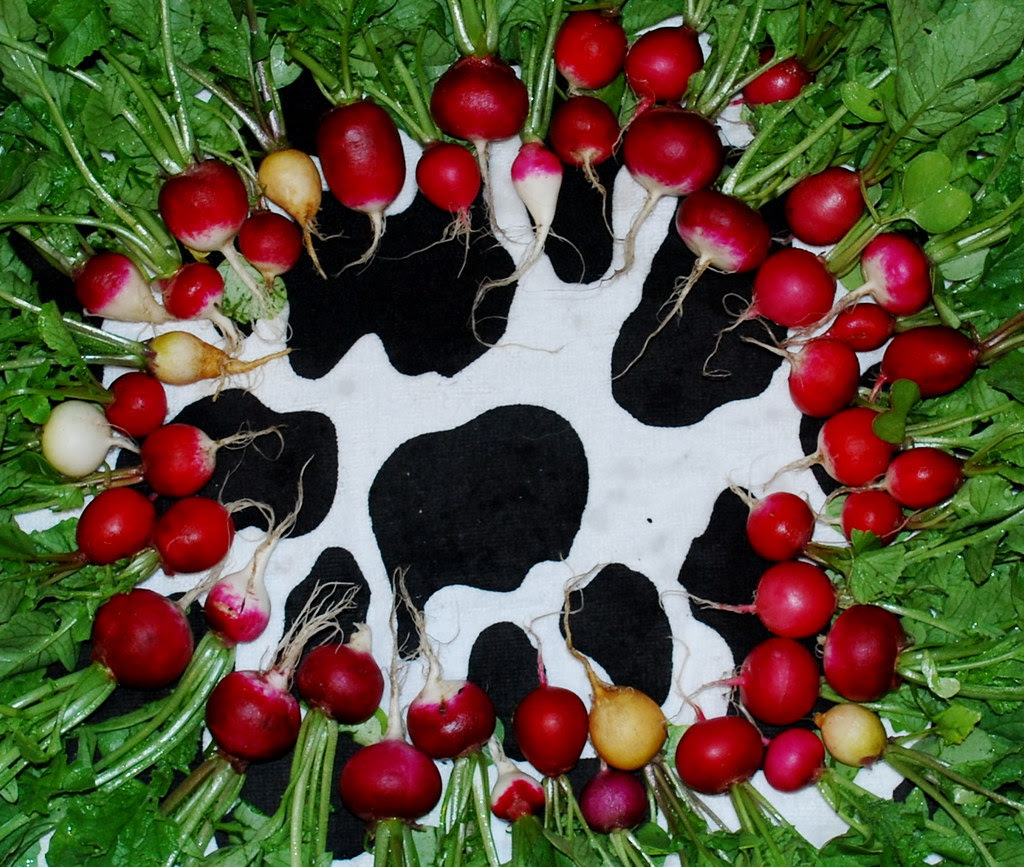 I bought two packets, one which said they'd be ready in a month, and the other, which was a 'novelty selection' of radishes of varying colours, that said they'd be ready in two to three months. So I figured if I put them in at the same time, I could stagger the crops slightly. But no, they've all come out at the same time after about two months of growing, I think. They're probably a little overripe - they're not a crunchyas the ones you buy in the supermarket, anyway, so I'll need to keep an eye on the next batch and pick them a bit sooner. These ones were kind of abandoned to the rain.

So, so far, success! I think the beetroots and then the onions will be next.
Posted by Seren at 11:35 3 comments: