Taking a break from getting the house ready for the celebrations this evening, I thought I'd do a quick post with some links and stuff. Last year Gaol Naofa made a video series on the festivals, but the video for Là Fhèill Brìghde came out some months after the fact, so it seems like a good time to repost:


The song we used for this one is a version of Gabhaim Molta Bríde ("I Praise Brigid"), and we have the lyrics on the Gaol Naofa website in the Music section of the Library. When we were making the videos we tried, where possible, to use songs that fit in with the festival or the themes/season, at the very least, and this song is perfect. Another song, if you prefer your songs in Gaelic rather than Irish, is Tha Bainn’ Aig Na Caoraich Uile (All the Sheep Have Milk), which is a puirt a' beul song that ties in with the theme of lambing and sheep's milk at this time of year (traditionally, anyway; most farmers have their sheep lamb a little later, around Easter, these days). The BBC has a video of it being sung from the Mòd Nàiseanta Rìoghail last year.

The video has some ideas for things to do, but if you're looking for something more in depth then there's always the stuff I've done over on Tairis:

And I've also updated the pictures on my Creating a Dealbh Brìde page. We've already made some for tonight, and once we've decided which one we're using we'll be welcoming Brìde in with a traditional call.

For more creative stuff, you could try making a cros Bríd. We usually make ones like this: 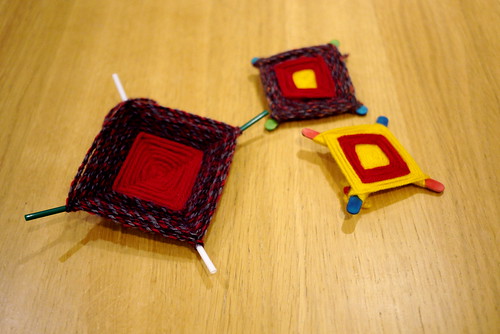 Which are pretty simple to make and are in the style of the ones I made as a child. If you want to go for a more traditional style of cros, then there are some good websites and video tutorials around, like:


And Jane over at The Ever-Living Ones has some fantastic pics of other styles of crosses, too.

Marsaili wrote up a tutorial for some woolly sheep decorations (they're so good!) on her blog that I wanted to try out with the kids. I haven't got round to it yet, having had an unexpectedly busy week, but we'll give them a go at some point I'm sure. We did make some beeswax candles last weekend, which Tom and Rosie did a brilliant job with. We're going to light them tonight, before they go to bed.

With the start of Spring comes the start of the gardening season. We've had snow here recently that's kind of frosted over so I won't be turning over any soil or sowing anything just yet, but once it's time I'll be consecrating the seed in preparation for sowing. Laurel has shared how she does it over on her Unfettered Wood blog.

For food, I'll be churning some butter in a little while with a traditional churning song, and I'm planning on using some of it to make a potato apple cake. The butter milk that's left over from the churning will go towards some drop scones for breakfast tomorrow.

If you're looking for a festive tale to tell, then The Coming of Angus and Bride is always a good one!
Posted by Seren at 16:57 No comments:

Follow up on the statue theft: Where is Manannán?

It's been just over a week since the statue of Manannán was stolen and a cross was left in its place, as I wrote about in my last post. Although the perpetrators haven't yet been found, or the statue recovered, there are a lot of people who are still hoping that some good can come of this. Whether that means the statue is recovered, or a replacement is made, either option seems like as "good" an outcome as possible under the circumstances. As the sculptor himself notes, the statue is more than likely to be in pieces already, but he's issued an appeal to the thieves:


When asked what he would say to the person, or persons, who made off with his statue, Darren made a simple appeal: “Just bring it back. Bring it home and see if we can get it repaired,” he appealed.

Darren says although he has got over the initial sick feeling he had when he first saw the damage to the sculpture, which took more than six months work to create, he is still crushed about what happened but says the worldwide outpouring of support has provided some comfort and makes him feel proud people held his work in such esteem.

So there's still hope that the statue may be returned. If it isn't, I do hope it will be replaced, and I think it would be incredibly short-sighted of the council not to considering the amount of attention this has all been giving them, and if there are fundraising efforts established locally then Gaol Naofa has pledged to support that. The huge amount of attention the story has been getting is almost as big a story as the theft itself; a Facebook page that was set up shortly after the news broke now has over 6,000 likes within the last week, and people from all over the world have been sharing their own pictures of the statue, articles from the news, as well as sending in messages of support. The person running the page is urging people to keep sharing and spreading the news, in the hopes that the attention will help with the statue's recovery, and many members of the page have been very generous in giving permission for their images to be used in making memes that can be shared. I posted one that Kathryn made in my last post, and with the help of Caoimhín Ó Cadhla translating for us (to whom we're most appreciative) we've now produced an Irish language version to share: 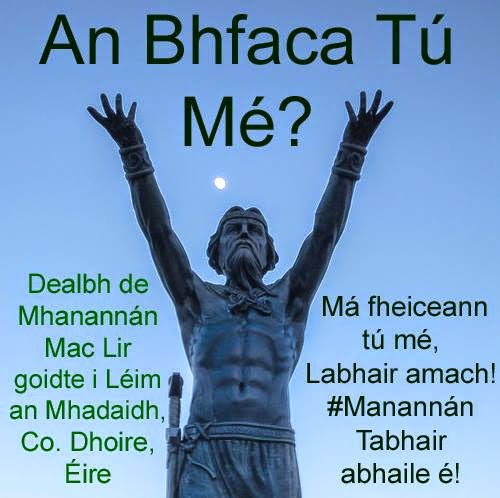 In addition to that, The Wild Hunt got in touch with Gaol Naofa for some comments about the statue's theft, which I took point on as sacrificial lamb head of the organisation, and the resulting article gives a really good overview of reactions from the locals of Limavady as well as polytheists (like myself...) and pagans. As I said there, we've been following the story closely on our Facebook page, and have been sharing some resources about Manannán ma Lir (like the video we did for Midsummer last year), including prayers and traditional songs, since this is something people can do wherever they might be in the world.

We decided that maybe a video was in order to help keep the story circulating, so Kathryn took point on writing up a script and creating a prayer to share, and with the kind permission of some of the photographers who shared their photos of the statue with the Bring Back Manannán page, we've put something together and we're ready to share:


So if you want to share the video and join us in singing Manannán back home, then please do so! We have a little introduction to it on the front page of the Gaol Naofa site, and the prayer from this video is available on a meme we've created, which you're also welcome to share: 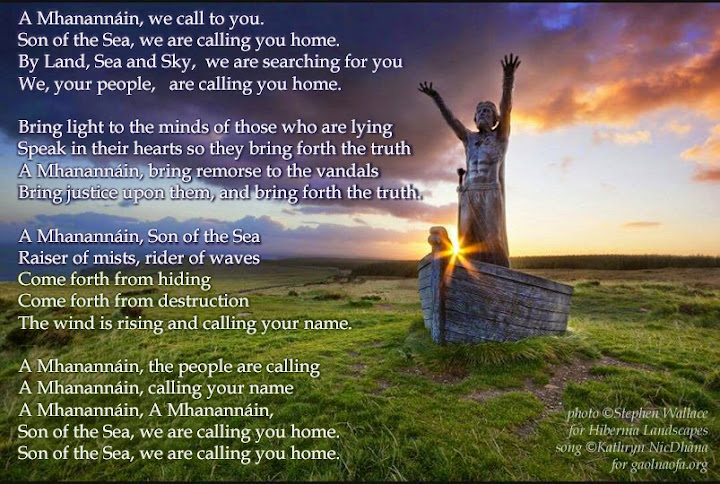 This is another one of the images we have up on the new page I mentioned above (along with a different-sized version of this one). If you click through to the front page of the Gaol Naofa site then you can find them in the Resources section of the Library. There are plenty more on the Bring Back Manannán FB page, too.
Posted by Seren at 00:15 2 comments: