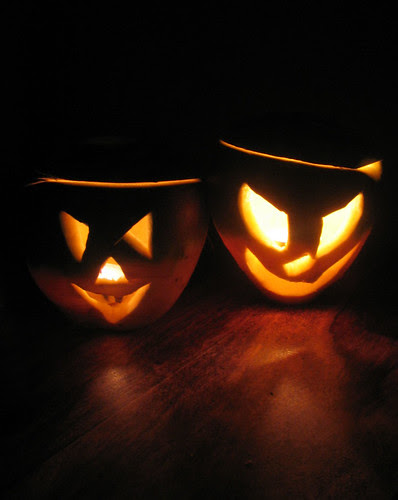 My house smells faintly of turnip...

Well, maybe not 'faintly'. There is a stench of turnip in my house...It's strangely akin to the smell of decay, really. That sickly-sweet kind of smell. I'm beginning to see why it was so appropriate to the season.

I decided to carve them now for a couple of reasons. Firstly, I'm planning to do quite a bit, and I have to be realistic and factor in the kiddy issue...If I had all day to myself then it would have been fine to do it all on Samhainn (Hallowe'en), but seeing as Tom is still in his helpful phase, wielding a sharp pointy knife seemed to be a little irresponsible when the kiddies would be about...Secondly, my husband is off at a meeting dahn sahf again, so I have the house to myself once the kids are in bed, and I don't have him complaining about the smell, or giving me 'helpful' advice to tell me that I'm doing it wrong...Thirdly, if it all went hideously tits up and I had to start again, I had plenty of time to start again. As it is, I think I'll use one during my Tara ritual, which I hope to be able to do tomorrow or the next day, and the other on Samhainn itself.

I'm hoping they'll keep a couple of days (I don't see why not), but they were surprisingly easy to carve out - much easier than trying to cut the damn things. Slicing the tops off was the most difficult part to be honest, and then I just cut a cross into the flesh as deep as I could, then gouged out the rest of it as I turned the knife in a circle, getting deeper and deeper into it. The turnip flesh just flaked out as I did this, and when it got really deep I used a measuring spoon to scoop out the rest - it was the toughest spoon I had, so it didn't bend, and I could use it scoop out extra bits of the turnip to gouge out the bottom, which was more difficult using a knife alone. I tried to get the walls of the turnips quite thin, but not too thin that they'd start to burn at the edges once I'd cut faces into them.

After I scooped them out, I drew the faces onto the turnip with one of Tom's felt-tip pens and then cut the turnip out as well...My first go on the left of the photo was too small and I had to cut a hole out of the lid to allow enough air in for the candle to burn adequately...My second attempt on the right seems to burn much better.

I've never attempted to carve a pumpkin, let alone a turnip or two, but here we are. It was easier to do than I thought it would be. I've used what those in north America would call 'rutabaga's'. I call them 'swedes', but after pumping my father-in-law for information, he assures me that swedes/rutabagas count as 'turnips', which he (and my husband) calls tumshies...A turnip is basically anything in the turnip family that's big enough to carve, from what I can tell.
Posted by Seren at 00:27 No comments: