Seeing as Samhainn is a pretty Big Deal round here it's one of the few festivals in the year where everyone gets excited and I can really make an effort to Do Stuff without appearing to be a complete loon. There's everyone putting up the terribly tasteful decorations and carving tumshies or pumpkins, there's the Hallowe'en parade at school and the guisers coming to our door...It's a great occasion and especially good for being able to get the kids involved.

Considering the fact that it's a pretty Big Deal it's going to require a bit of planning ahead. We got some really huge tumshies last year, which were perfect for carving, so hopefully we'll get some more this year. Seeing as they're quite tough to carve (instructions for carving here, if you're looking for tips) they're not really something I can do with the kids just yet so I've tried to carve a pumpkin over the last few years as well. Maybe it's just the crappy plastic tools we have for the job but they're quite tough too, but while the stench of tumshie is quite evocative, shall we say, the innards of a pumpkin reminds my son of brains, apparently: 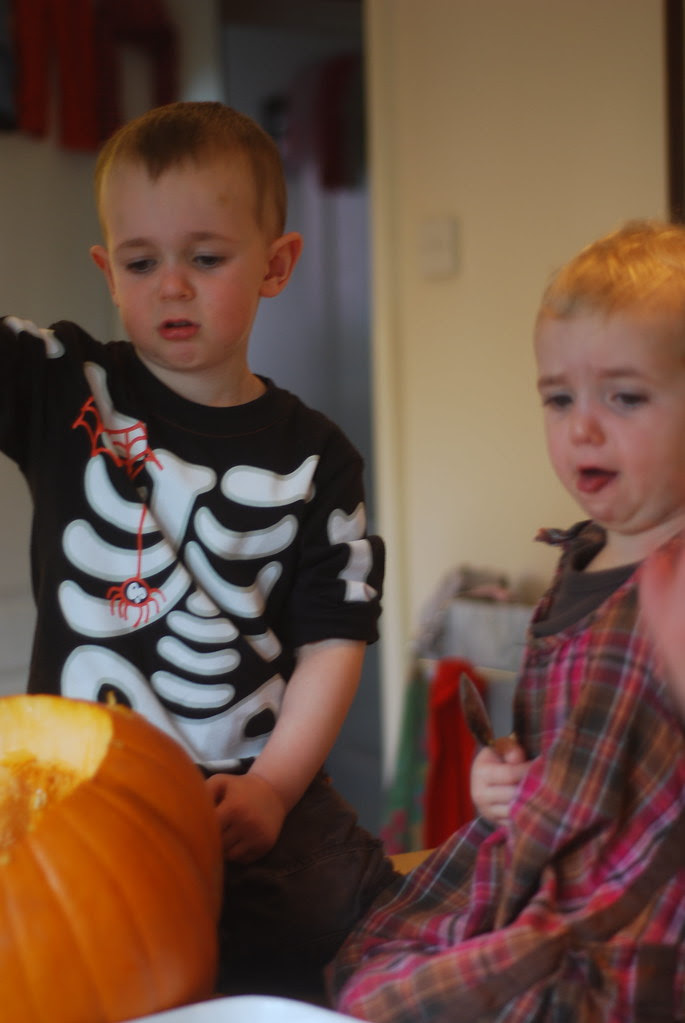 We couldn't get one last year but I've promised Rosie a pumpkin soup at the least this year. Seeing as I've no idea how to do that I still need to figure that one out... The kids want to go guising this year, for the first time, so if it's cold (we've already been having frosty nights so there's a good chance) the soup will be good for warming them up when they get back. The kids can help me make it, and some Brodick bannocks to go with it too. And maybe some butter - they have great fun yelling out the rhymes to make the lumps come.

Seeing as the kids want to go guising, they'll need to prepare some jokes or songs if they want their sweets (or hot dogs - one of the houses handed out hot dogs last year, they were very popular!). Trick or treating isn't really a thing here; you only knock on doors that have lanterns put out to indicate that guisers are welcome, so sweets are pretty much guaranteed, and you have to perform a piece of entertainment or the people you're prevailing on can tell you where to go. As the song goes:

Although jokes and nursery rhymes are what you'll probably hear, there are plenty of traditional songs too. "Tell a Story" is one, but I think the best known one is Heigh Ho for Hallowe'en:

Hallowe'en a nicht o' tine
A can'le in a custock.

(Or: Hallowe'en a night of fire/A candle and a cabbage stem./A tumshie lantern with scowling eye(s),/To scare both witch and warlock.)

But I suspect the kids might decide to sing "Twinkle Twinkle Chocolate Bar" because they like doing the actions. I think that's about all they'll need to know about guising for now - they can get up to the mischief part when they're older...

We made some decorations last year but seeing as it's the October holiday I think we might just make some more...I think it's going to be a long week ahead this week. We also have our seasonal mural to think about, and now we have a fish tank in the way of where the murals tend to go I think we'll be adapting it to make a background for the tank.

It wouldn't be a proper Samhain without some games for the kids, so a bit of planning is required for that, too. I'd like to try the divination game with the crowdie, where you whip up a big bowl of the cream, honey and oatmeal and mix some charms into it for everyone to try and dig out. Before now I've felt the kids have been a bit too young for it - small parts being included and all - but my youngest is five now and I think she's old enough to get the gist of things and not end up having to make a mad dash to hospital. I'll need to figure something out because I don't have any charms yet, but that shouldn't be too difficult. I might also have to adapt the game slightly because there are worse things in the world today than getting a charm that suggests you won't ever marry. Otherwise, we'll have the usual games - dookin' for apples, blind man's bluff, musical statues and musical bumps and so on. I also have what looks like a decent recipe for treacle scones I can use for that game, so hopefully I'll finally get around to trying that too.

So as usual there's a lot to fit in, including time to do my own thing, of course. Some of our plans will probably fall by the wayside, as it usually happens, but at least I'm in a more physically capable state to make a go of things this year. With the kids wanting to go guising the feasting part of the proceedings will probably take a backseat to the more important aim of the kids making themselves feel thoroughly sick, but I like to round off the celebrations with a nice meal the day after too, so that can still get done. Then of course there will be saining to be done and offerings to be made. And perhaps a story or two to be told, for the kids. 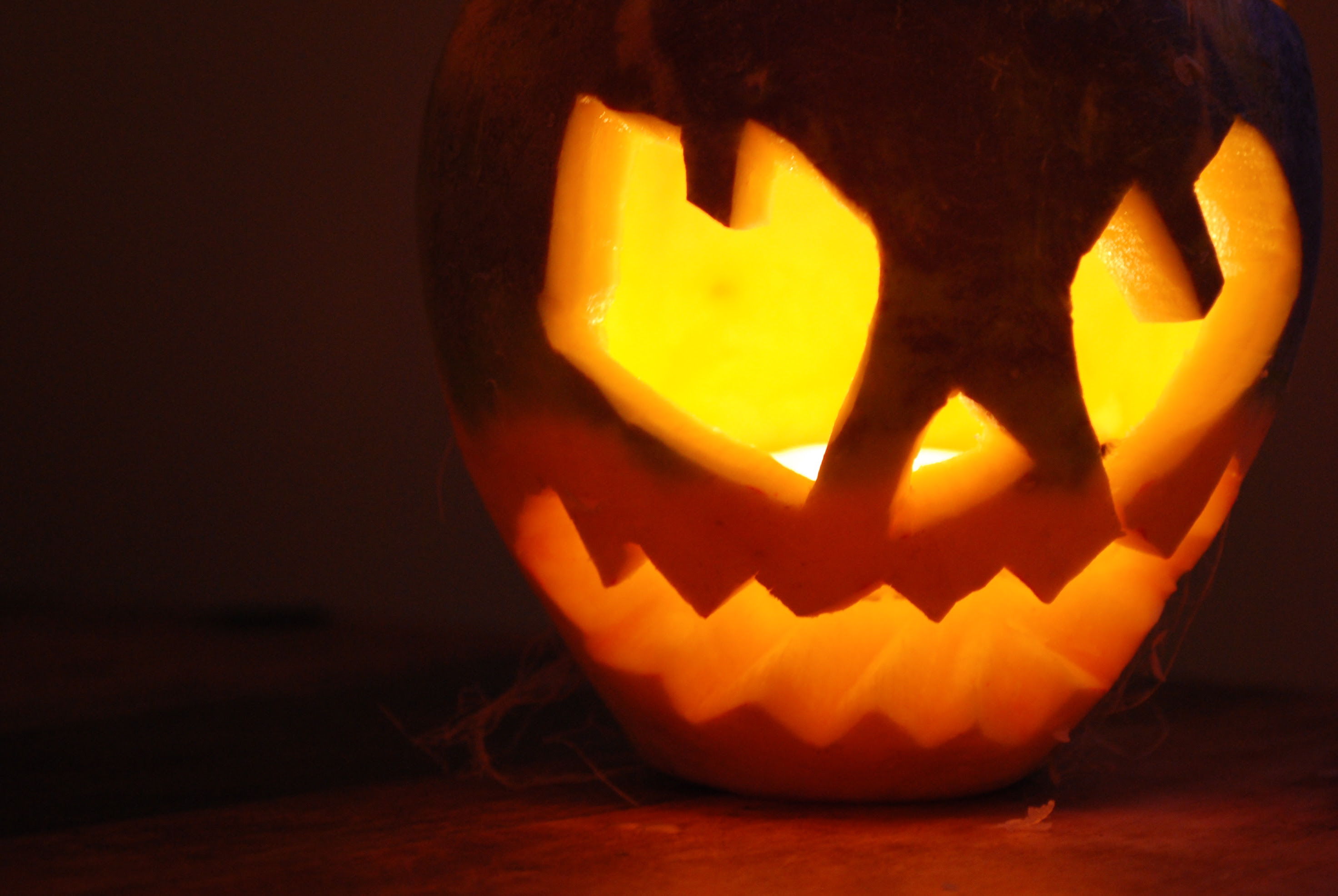 The news yesterday was quite momentous for Scotland, with the announcement of an agreement between the Scottish parliament and Westminster about the referendum on independence. There has been a lot of debate in the past few years or so about how the referendum is going to happen and some of the major points were agreed yesterday, with potential for other points to be put in place as well..

The general gist of the agreement is as follows:


This is basically what Alex Salmond, Scotland's First Minister, was hoping for. Over all the news is positive from Scotland's point of view, although the agreement on a one question format has led to some upset. Up until now debate had mainly focused on what the question is going to be - the devil is in the detail there - but also on the kinds of options that could be offered. Broadly speaking, the referendum question could be a simple case of asking voters to decide whether or not they want to vote in favour of Scottish independence, and in case, it's a simple yes/no answer. Alternatively, the question could get a bit more complicated and voters would be offered a choice between independence, staying in the union, or choosing door number three.

This third option is called "Devo Max." Instead of going for outright independence - full autonomy - voters could instead decide to choose to opt for further devolved powers being given to the Scottish government. In broad terms it could be seen as just one step shy of full independence, essentially giving full fiscal autonomy to scotland, but otherwise staying within the union.

Devo Max has a few advantages and disadvantages. On the one hand it's a baby step towards independence - a step in the right direction for those who like the idea of independence, but not too big when you consider all the things that might go wrong and start to worry about them... It offers a something of a safety net in case of disaster, and so on. On the other hand, it's not independence and it would mean that the Scottish tax payer would still be footing the bill for things that aren't popular here, like nuclear arms, and so on. It is argued in some quarters that this option would be financially wasteful, duplicating expenditure on some things that would remain as part of the UK infrastructure, simply for the privilege of staying under their care.

To a certain extent, there are a number of folks in both the Yes and No camps who view Devo Max as an unnecessary compromise. In theory it leaves the door open for a further referendum in future, paving the way for a yes vote, so it's not a solution for either side, really. A no vote, on the other hand, is seen as putting the question to rest in a fairly final manner, at least for another generation, anyway. And a yes vote is a pretty final solution too. So neither side really see Devo Max as an end in itself, and ultimately it doesn't solve anything.

It's also possible that offering three options would have split the vote and we would still end up with a "No" on our hands. The people who didn't vote No might then be unhappy because their vote combined might have given a different result, so all in all it seems that a basic Yes/No sort of question is both simpler - and therefore less confusing for the average voter who doesn't want to deal with complicated options - and potentially safer and more decisive in the sense that the vote can only go one of two ways.

Still, it's a tricky one. Seeing as the agreement has ultimately played out in favour of Scottish parliament, there are some who are saying that Westminster has basically handed the referendum to the Yes vote already. I'd say the vast majority of current Westminster policies are doing the job more than anything right now - with a Tory government (albeit in a Lib Dem coalition, but they're basically ineffectual) in Westminster right now, much of what they're doing really goes against the grain of the average Scottish voter who tend to be more left leaning than the Middle England voters Westminster generally tends to court. That, more than anything, will prove to be a big factor in however people decide when it comes to it, I think.

The potential for opening the vote up to 16-17 year-olds is also controversial and weirdly, from what I've seen on the news so far, it's the one thing everyone is concentrating on. They don't pay taxes, why should they vote! They won't think for themselves, they'll vote however their parents do! And all sorts of silliness. I don't see it as an inherently bad thing but there are surely pros and cons to that too.

The bottom line is, this is a momentous occasion, it really is. There are still plenty of things that need to be hashed out but we now know that the referendum will take place, and while we don't know what the question is actually going to be, we know it's going to ask for a Yes/No answer. Polls so far generally have the yes vote hovering around the 30% mark, but that doesn't mean much right now. Two years is a long time in politics and there are a lot of undecideds and people who won't get their preferred option of Devo Max who will now need to have a rethink. And many might change their minds repeatedly up until the day of the vote itself.

If you want to read up on things, here's something from the BBC with further links to explore on the page. You can also view the agreement itself. Wikipedia has a decent article explaining the basics of Devo Max if you want to look at that more closely, too.