A very Happy Hogmanay to you all

Here's to a very Happy Hogmanay and a wonderful new year!

While I take a break from watching Batman and getting everything ready for seeing the new year in this evening, I thought I'd do a quick post (and celebrate the fact that I finally found the charger for my camera, which I "put somewhere safe" after we got back from Ireland in July and hadn't seen since. I tried buying a new one, which never arrived, and finding another one proved difficult, so I'm glad it turned up. For future reference, behind the bedroom mirror is apparently a "safe place." Who knew).

I'm feeling rather introspective and thankful as the year comes to a close. As years go, 2014 hasn't been a terrible one at all, especially now that we're finally getting back on our feet, financially, after Mr Seren lost his job in 2012 (and let's hope that continues). As years go, that one pretty much sucked donkeys, but we got through it I guess.

But it's certainly not all been sunshine and roses this year - not least for the fact that Eddie finally popped his clogs. As these things go I guess it could've been worse, but a new addition to the family takes some of the sting away: 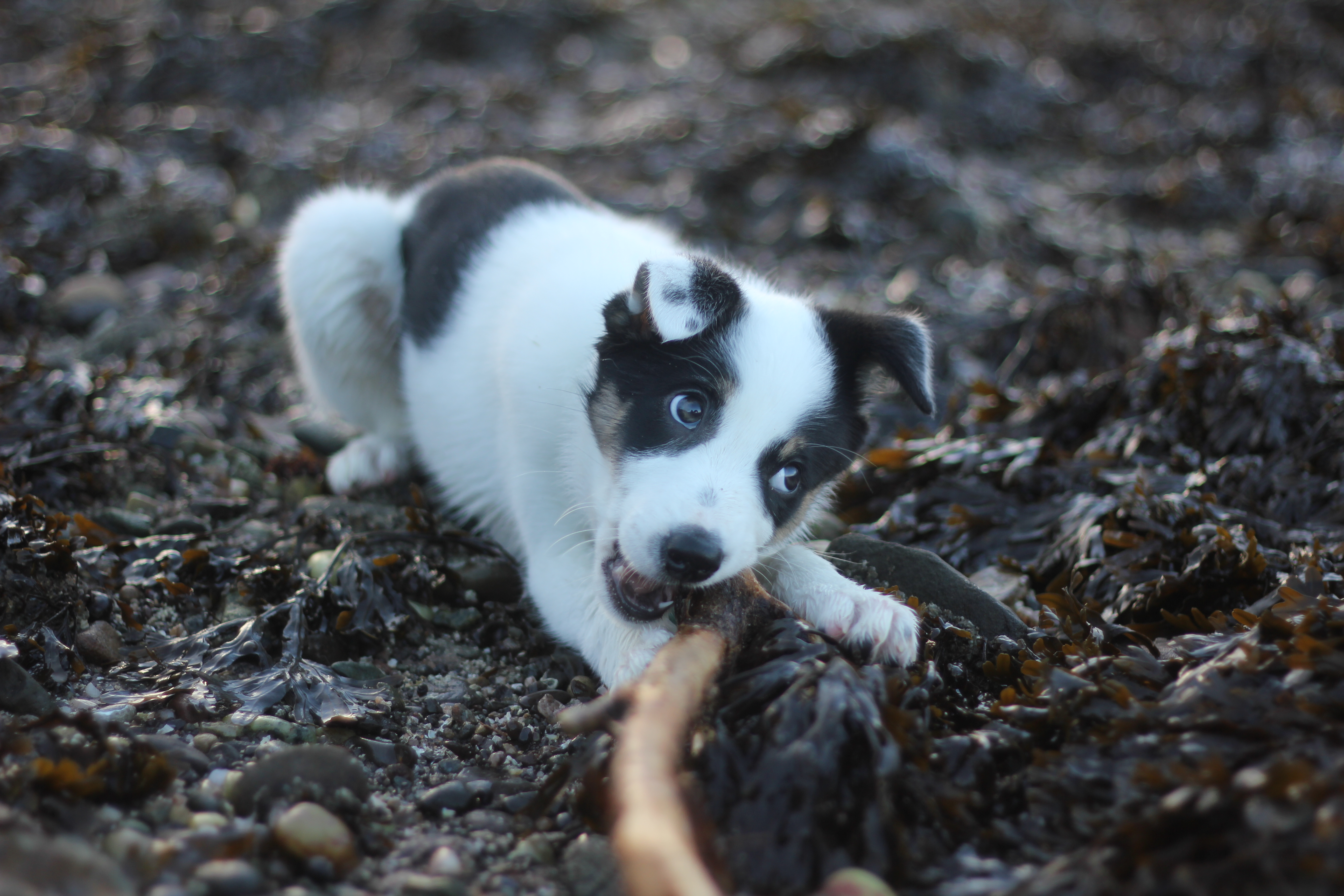 This is Oscar, a "border collie" puppy (honest) who's probably only a wee bit sheep dog all in all... We think there's a good chance he has a fair bit of Jack Russell in him, and Mr Seren's convinced there's a bit of husky in there too. His fur is very soft and fluffy like that and his tail does curl up like a husky-type dog, but I think it's wishful thinking on Mr Seren's part there. Either way, we think he's going to end up about sheep dog sized, but aside from the markings on his head there's not much that's typically "sheep dog" about him, aside from the boundless energy, maybe.

We weren't planning on getting another dog so soon after Eddie, but as it happened looking at cute puppies helped cheer me up and I saw that Oscar needed a home only a few days after Eddie died. With the kids so young it's difficult to get a dog through rescue centres, since they tend to be very cautious about rehoming older dogs and puppies are few and far between. We'd prefer to get a rescue, but if that wasn't going to happen we didn't want to go out and just buy a puppy. As it happened, Oscar had been with a family for three weeks, but one of the kids, who's autistic, wasn't coping with the change. They'd previously had a sheep dog so thought he'd be OK with it, but as with any puppy, Oscar's pretty full on at times and it proved too much for the kid. He started locking himself away and self-harming, and eventually the parents decided that it was better if Oscar was rehomed before something terrible happened. So I emailed the family and introduced myself, and they got in touch straight away. Two days later, after a couple of chats on the phone, we went to see him and brought him home with all of the bits and pieces they'd bought for him.

He was eleven weeks when we got him - he's just coming up 15 weeks now, and a bit bigger than he is in the photo there - and he's obviously been well looked after. He came from a farm - friends of the family, who gave him to them after their old dog died - and he's a very confident and outgoing little dog, and he's picking up commands and cues quickly. Though he often has a bad case of selective deafness... Hobbies include chewing, chewing, and more chewing.

Mungo's taken to him well and they've become good friends, and Mungo's a lot happier having someone to play with. With Eddie being as he was towards the end, he wasn't up for running around the garden play-fighting, and so on, so it's nice to see Mungo feeling a lot perkier these days. He was a little nervous of Oscar at first but Oscar's not exactly shy and Mungo was attempting to sit on his head and show him who's boss in no time.

Redding the house with a puppy to keep occupied has been an interesting challenge, to say the least. Tonight the kids are staying up to see the bells in, if they're good, and we'll be going to the in-laws for the usual steak pie tomorrow (probably with Oscar in tow). We have the candles lit and there's shortbread ready to go out as offerings after the bells have rung. Then we'll sweep out the old year and welcome in the new, and in the morning the house will be sained after a good breakfast.

If you check out the Hogmanay tag here on the blog you'll find some blessings and saining prayers I've posted over the years, if you're looking for inspiration. One of my favourites is: