Every now and then I take it upon myself to try and master a new recipe or two, especially if it's a good old stodgy traditional Scottish kind of thing. For a while now, on and off, I've been experimenting with trying to make a Skeachan cake - a 'treacle ale' cake. It's basically a fruit cake, made with a little black treacle and ginger, and the fruit is soaked in ale for about 24 hours before baking to make them all soft and juicy.

Technically skeachan is the 'treacle ale' - ale flavoured with black treacle, ginger and some other flavourings. I have a recipe for the skeachan itself (though I've not tried making it yet), but not the cake, so I had to look one up online. There were several to choose from but they all seemed to be lacking something, I thought, though I wasn't quite sure what - aside from not including enough ginger. Then one day I went on a trip to Luss - a nice little village on the shores of Loch Lomond with a fantastic tea room (they do the best soup I've ever tasted) - and they had some skeachan cake on offer. Obviously, for research purposes, I decided it was necessary to indulge in a slice.

After trying that and comparing my previous efforts, I found the recipes weren't far off after all, but definitely more ginger was needed, and the kind of ale you soak the fruit in is key. On the first few goes I tried some locally brewed pale ale and then a heather ale (Fraoch), but I think the cake needs a good heavy beer, so I ended up trying Guinness instead. That did the trick for my tastebuds. The cake I tried was topped with slices of crystallised ginger, which I think was definitely the missing ingredient. Now, after a bit of experimenting, I think I've cracked it: 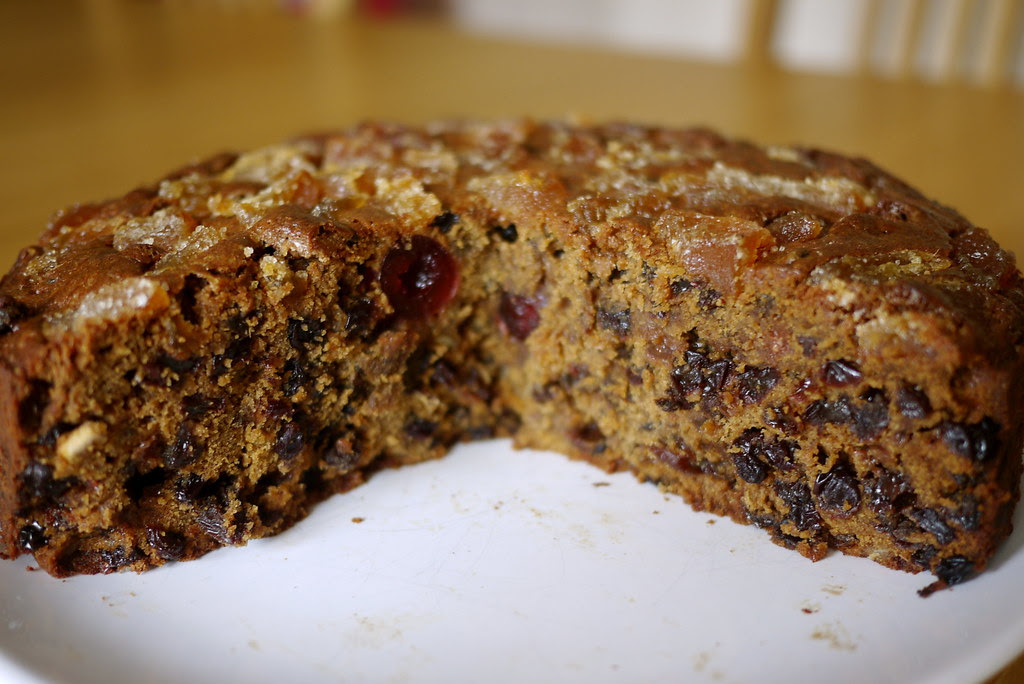 It's a good cake for festive occasions and quite moist compared to some fruit cakes, and it's similar to the traditional Christmas black bun (but a bit less fiddly to make). So here's the recipe, if you want to try it:
Skeachan Cake
I cook by weights, but I've tried to adapt it to volumes as well. Bear in mind that I've rounded everything up to the nearest quarter cup for the sake of ease; the exact volume to weight ratios are a little less, but that shouldn't make much difference overall. You can easily adjust the ratios of dried fruit if you prefer (I like to use more sultanas and raisins, and a little less currant and peel), as well as the amount of ginger you use. I use quite a lot to give a fiery kick to it, but you might want to add it gradually to see how you prefer it. I've outlined the traditional method of combining the ingredients below, but you can get good results by just putting the ingredients for the cake batter altogether in a mixer, and then just stir in the fruit.
For a non-alcoholic version I think soaking the dried fruit in a flat ginger beer or cordial could work, adapting the amount of dried ginger for the batter.
Ingredients
225g (1 1/4 cups) Raisins
225g (1 1/4 cups) Sultanas (golden raisins)
350g (2 1/4 cups) Currants
75g (1/4 cup) Citrus peel
250ml (1/2 cup) Ale
225g (1 cup/2 sticks) Butter
225g (1 1/4 cups) Dark brown muscavado sugar
1tbsp Black treacle (or molasses)
4 large eggs
225g (1 1/2 cups) Plain flour
3 tbsp (approx.) Ground ginger
1 tsp Mixed spice
200g (approx) Crystallised ginger
Optional: Glacé cherries
Method
1. Soak the raisins, sultanas, currants and citrus peel in the ale for at least 24 hours, stirring occasionally.
2. Preheat the oven to 160C (adjust for a fan oven - about 10C less) and grease a large cake tin.
3. Cream the butter and sugar together until fluffy.
4. Beat in the treacle, followed by the eggs.
5. Mix in the flour and spices (to taste).
6. Stir in the soaked fruits and the cherries.
7. Pile the mixture into the cake tin and cover the top with the crystallised ginger, using scissors to cut it to the desired thickness.
8. Bake for about 2 1/2 hours, or until cooked.
9. Allow to cool, then enjoy. Goes nicely with a little bit of cranachan.
Posted by Seren at 11:08 4 comments: