Food is a very important thing, culturally-speaking. Different cultures have different kinds of treats, for one, and as far as celebrating things are concerned, sweet treats can form a very special part of it. At Christmas, in Scotland, it's traditional to have a black bun (something I've yet to try my hand at) or a Selkirk bannock. Gingerbread is always good at Hallowe'en, while cranachan is the must have tastiness at the harvest...

And then there are the kind of treats that aren't really associated with particular times of year, but more to do with the kind of ingredients that tend to lurk in cupboards. Indian treats tend to be very coconutty, for example, whereas in Scotland they generally consist of fat, sugar, various flavourings (often spices like caraway or ginger, and/or dried fruits), and oats or flour of some of form or another. Shortbread? Clootie dumpling? Parlies? Pitcaithly bannock? Yetholm bannock?

It was this reason that led me to one very shocking and important discovery (according to Wikipedia, so it must be true), since I had some porridge oats that needed using:

The US and Canada don't have flapjacks.

Not like we do on this side of the Pond, anyway. Apparently a flapjack is a kind of pancake in north America, while here they are made of oaty, buttery, sugary and syrupy deliciousness: 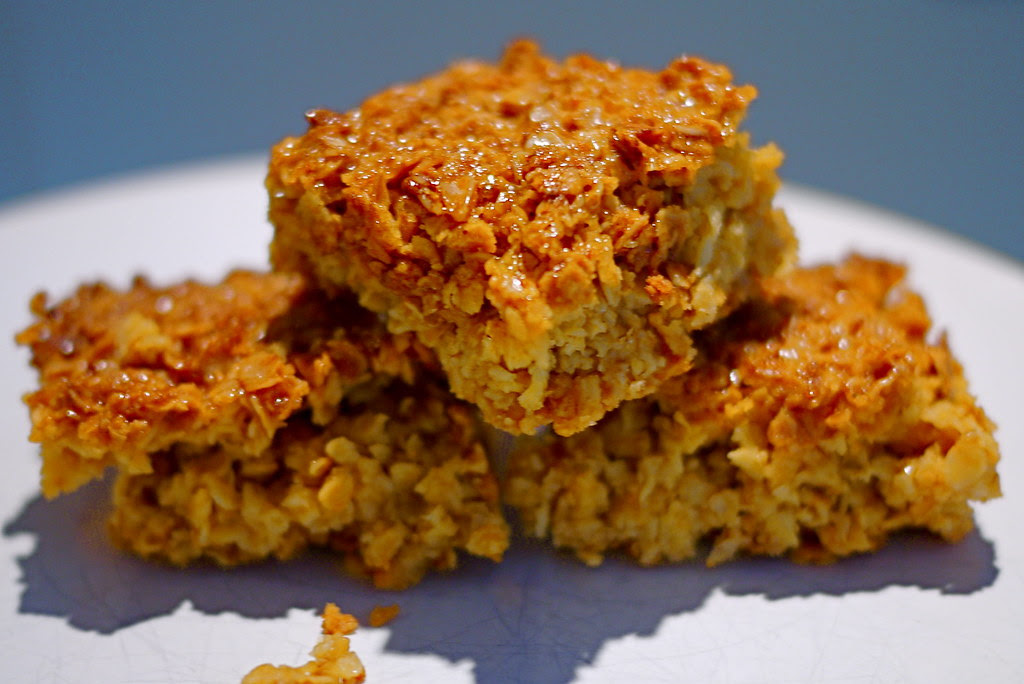 The reason I discovered this is because I was going to post the fruits of my labours and a recipe, and it occurred to me that golden syrup isn't really a thing in the US. So I wondered what kind of alternatives were used instead, and apparently the answer is: None, really. Corn syrup would be the obvious choice, but it seems that most folks hold out for golden syrup when they decide to make "English flapjacks" (as they seem to be called, but they're not just an English thing, honest) as some sort of exotic tastiness...It seems odd to think of something so fundamental to my own childhood and existence as not being a thing somewhere. That it's seen as something different.

So anyway, if you fancy clogging up your arteries and speeding up your Type 2 diabetes, why not try some? The following recipe is for the usual homemade flapjack, that goes quite hard and kind of crunchy-but-chewy once they. If you want a softer flapjack, either: Eat before they've cooled down, or add a little bit more golden syrup, a tablespoon of flour or so, and bake a little thicker. The recipe I used calls for an 11'' x 7'' pan, but I prefer using a slightly smaller one so they're thicker so I get a bit of chewiness in the middle.

1. Put the butter, sugar and syrup into a pan and heat until golden melted goodness is achieved.

2. Stir in the oats until well mixed and whack into a baking tray.

4. Remove from the oven and cut the flapjacks into fingers. Leave to cool before removing.

Email ThisBlogThis!Share to TwitterShare to FacebookShare to Pinterest
Labels: recipes

Things you need to know for St Patrick's Day