Out in the sunshine

Here in sunny Scotland we're currently basking in glorious sunshine. Glorious, glorious sunshine and temperatures edging towards the mid-20s (or mid-70s, if you prefer). For us here it's an all too rare occasion, although as much as the kids are enjoying unfettered access to the garden and beyond, getting them to sleep is a different matter altogether...

In spite of the lack of sleep we've been making the most of it with plenty of trips to the beach to let the kids and dogs cool off (I've even had a paddle in the waters myself, which considering how bloody Baltic the water is says a lot, I think). And of course, this burst of warm weather is good for the garden, too: 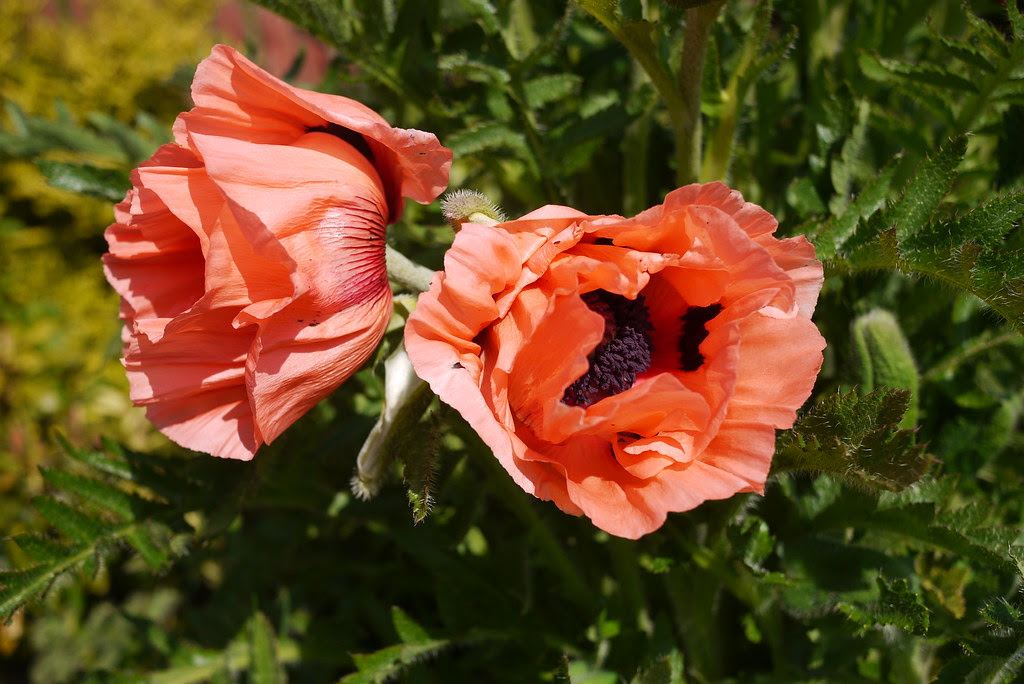 So much of what I've planted outside has some sort of significance to it, some reason and purpose. Poppies for my Poppy (my granddad, the gardener), next to the small cairn to the ancestors I made with the rocks I dug up in the first couple of years as I tried to condition the soil: 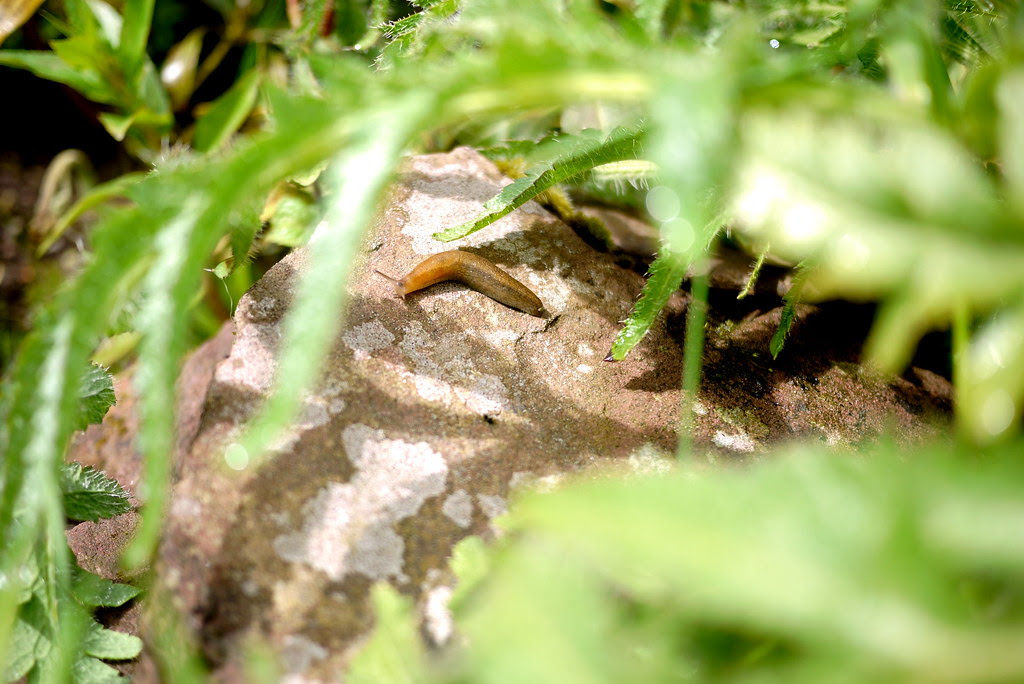 Home of slugs (and other fun things, I'm sure).

The rowan, planted for protection, is in full and glorious flower too, covered in cloud-like blobs: 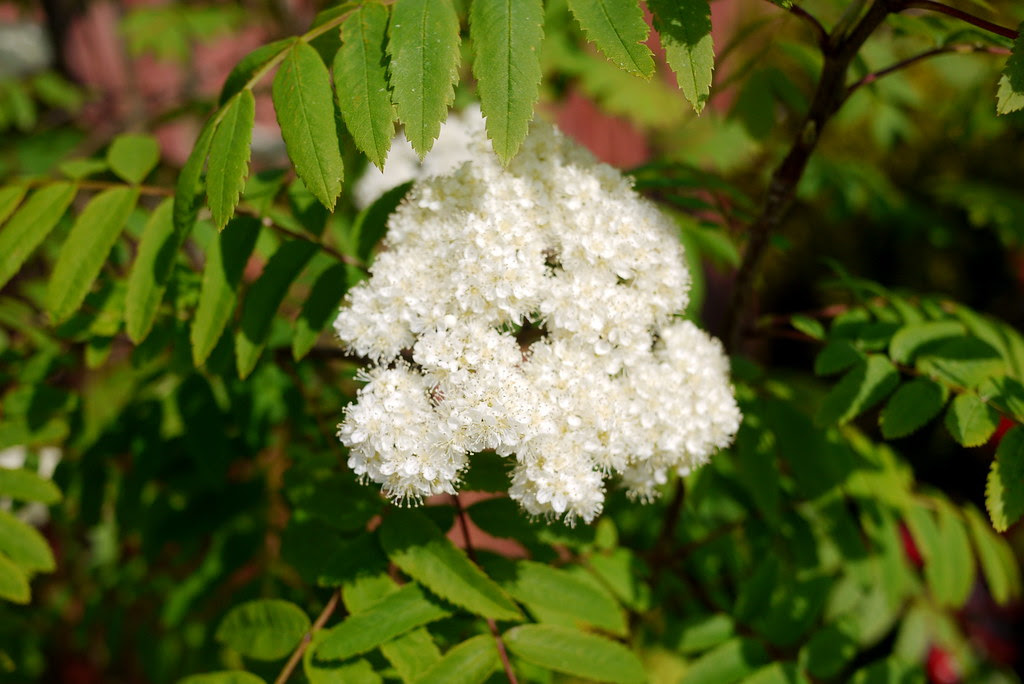 Hopefully they will turn into lots of bright red berries come the autumn.

Then there's blueberry bush, which I will harvest around Lùnastal, now flowering as well: I'm not sure there will be so many berries this year, while there's plenty of new growth at the tips of the bush I think the late cold snaps we had just as the bush was coming into leaf have done for some parts of it. Still, I'm glad it survived. Thanks to the storms we lost one raspberry bush, but the other - I think the golden raspberry I planted last year - will be flowering soon, and the blackcurrant I put in last year is dotted with tiny currants. The rushes, planted for Manannán, are...doing whatever they do (they're not flowers, really...). All in all everything is thriving, which is good. Kind of: This is the devotional space I maintain in the garden, with the poppy (behind which is the cairn), and the 'pond' with the rushes at the front there, some juniper to the right (for protection), some trailing ivy (also having protective qualities), the blueberry bush right near the gnome (Wilf), and the rowan just in the background there. Things are a leeeettle crowded.

As I've said before, I would describe myself as an optimistic gardener, in the sense of "shove it in and hope for the best." The hoping has certainly helped, it seems...The woody thing poking out behind the juniper bush, between the rushes and the gnome (Wilf) is the insect house I posted a picture of a few months ago: 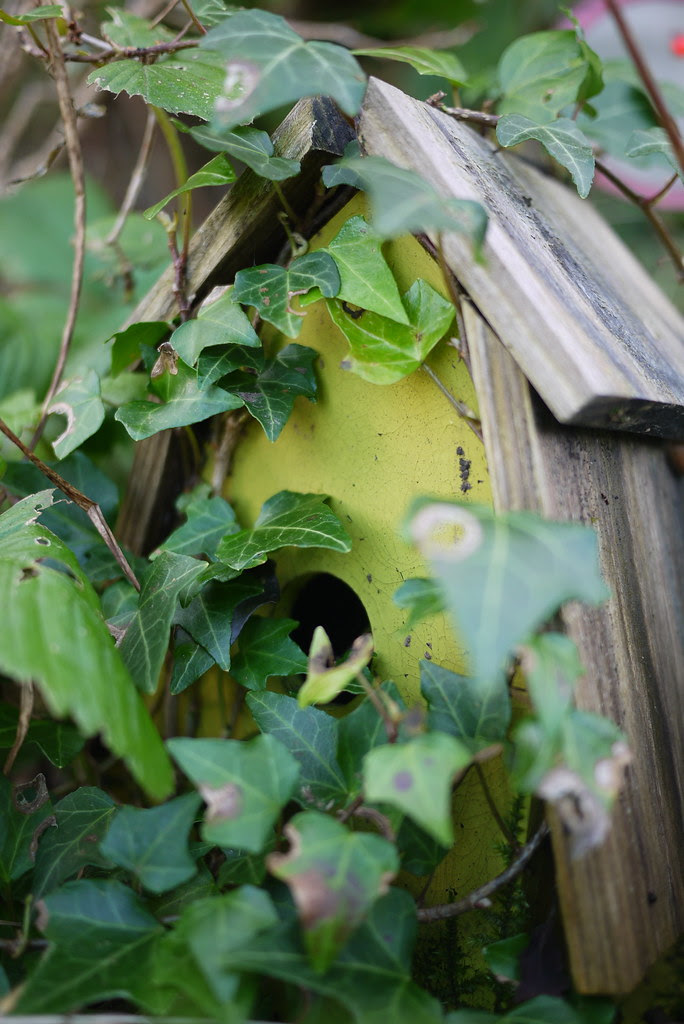 It's now almost completely subsumed by ivy and a strawberry plant, while I've no idea what's happened to the primroses and the cowslip is still lurking in a small gap...Now probably isn't the best time for pruning, while everything is growing at full tilt, but I think it needs to be done at some point, at least.

Seeing as I've planted most of the things in the garden, though, I have at least a vague sort of idea of what they are. As I tend to them and get my hands dirty, I put a little bit of myself into it all and in a way their roots become my roots. I realised, though, as I'm getting more mobile again and wandering down to the beach of an afternoon, that I can't say I know what all of the flowers and plants are that are growing wild. It's not something I ever learned as a kid, and I think it's important to know these things, to understand the place I live in. So I've resolved to get more educated on that; it's probably going to be a little hit and miss since at the moment I only have the internet as my guide, but so far I've found (prefacing all of these with "I think"): 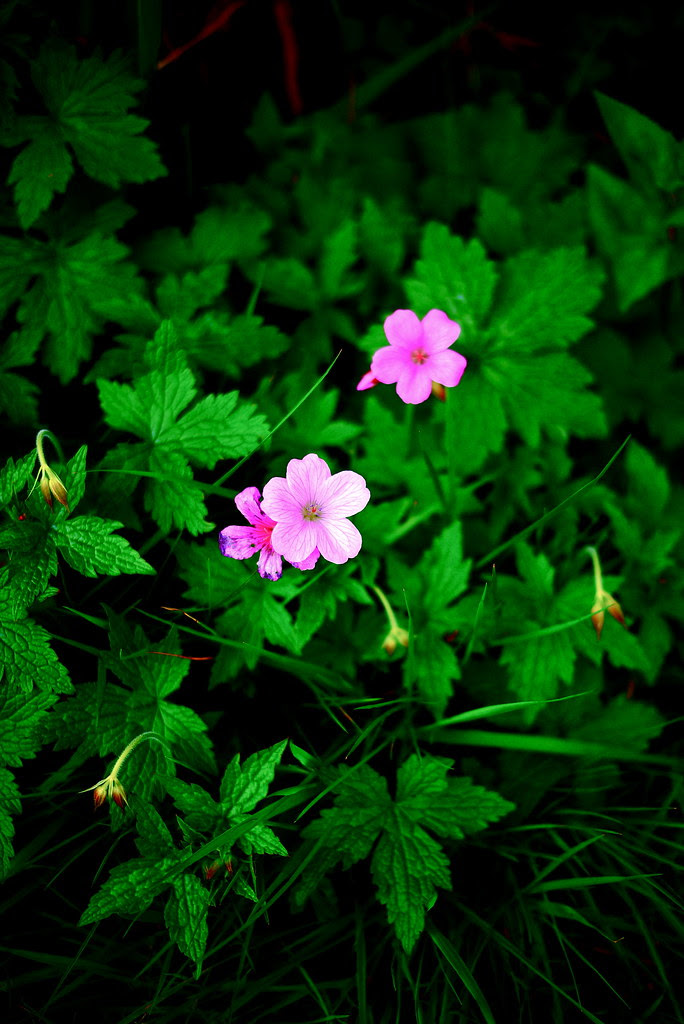 Bloody cranesbill. The next one, according to my searches: 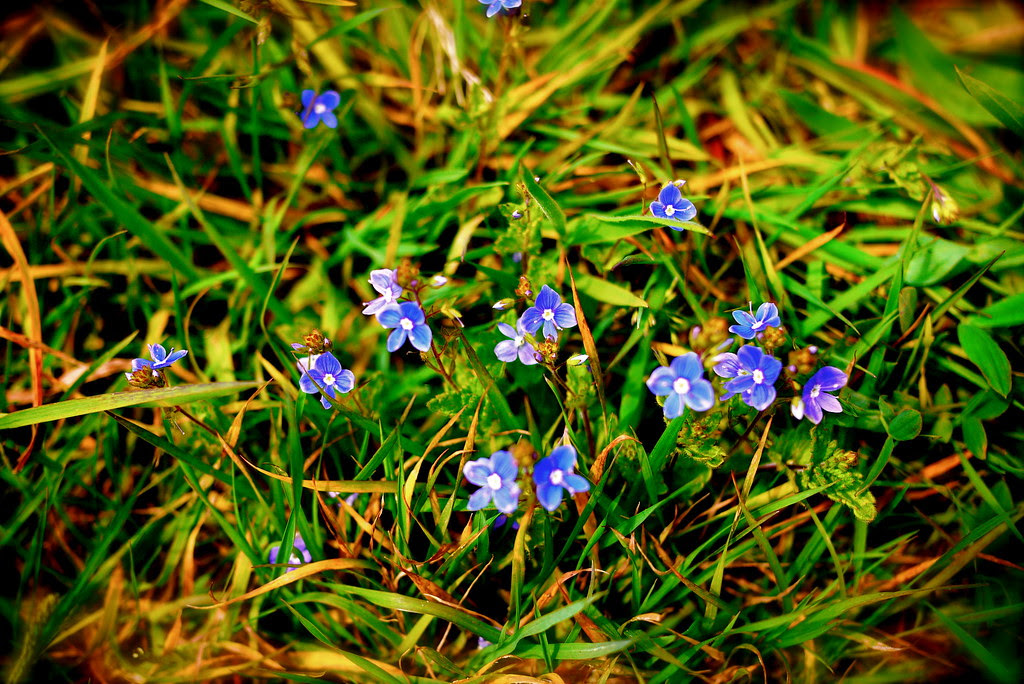 Is blue wooly speedwell. I think the grass is suffering from weedkiller here; the company employed to look after the public areas in the village has used it liberally this year to stop the grass from spilling out onto the pavements (easier and quicker than having to tidy things up manually), or from growing too close to trees and hedges, to cut down on the need for strimming. Lots of plants have become casualties to this and I for one am not best pleased about it. Grr.

Anyway. In amongst the rocks at the beach there's thrift: 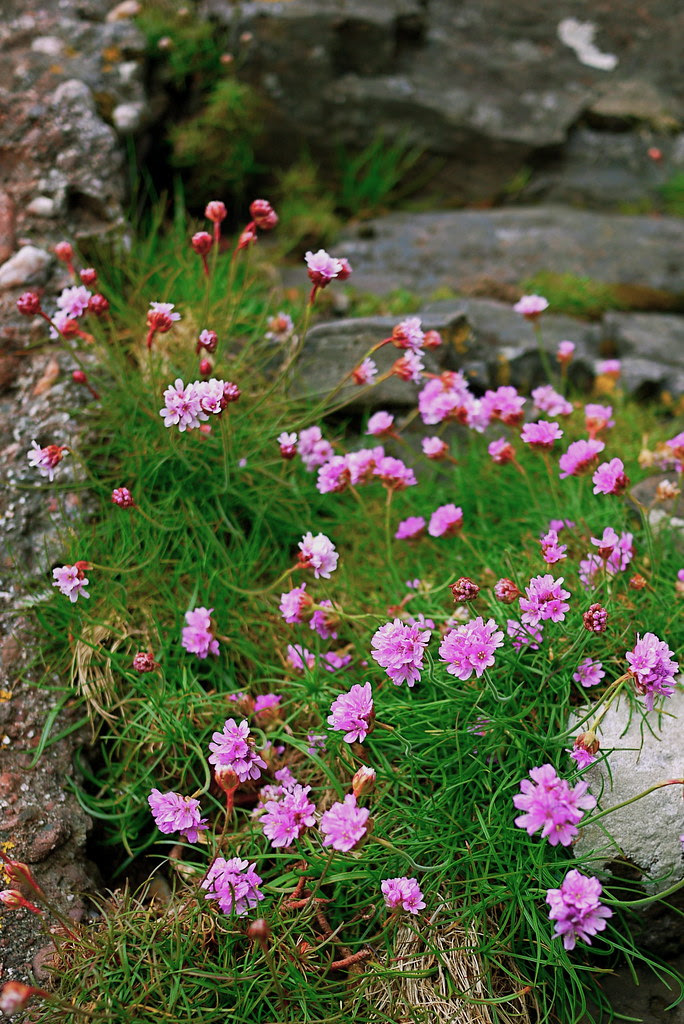 Which is beautiful (and Rosie's favourite). The next one I've yet to identify, mainly because I didn't get a decent picture and I don't think the flowers are fully out yet: 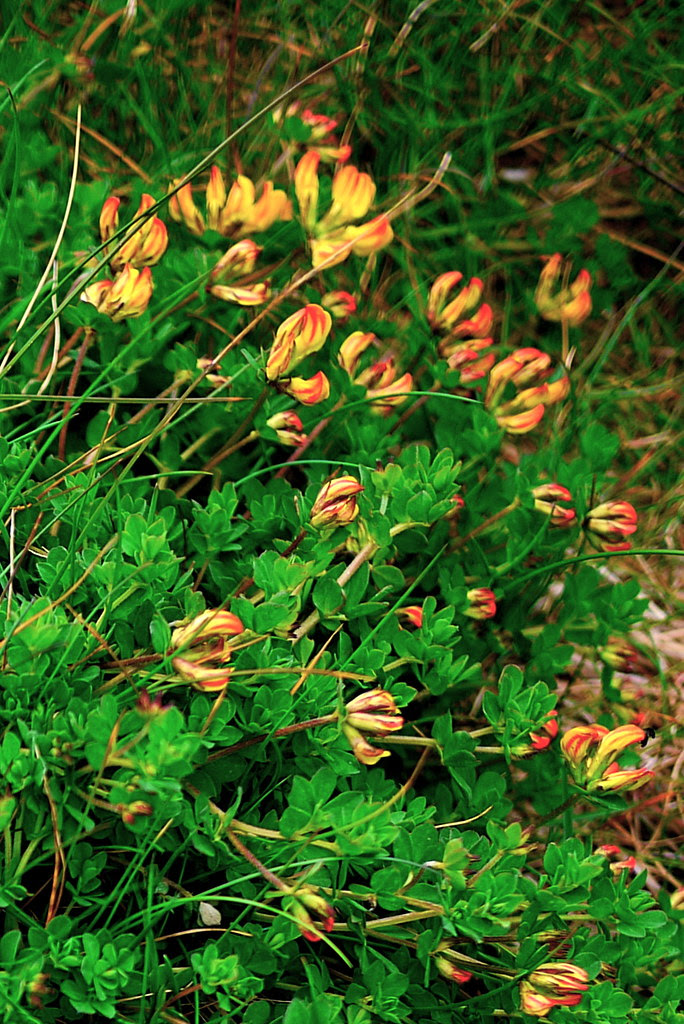 Any ideas from the more educated are welcome! And last but not least: 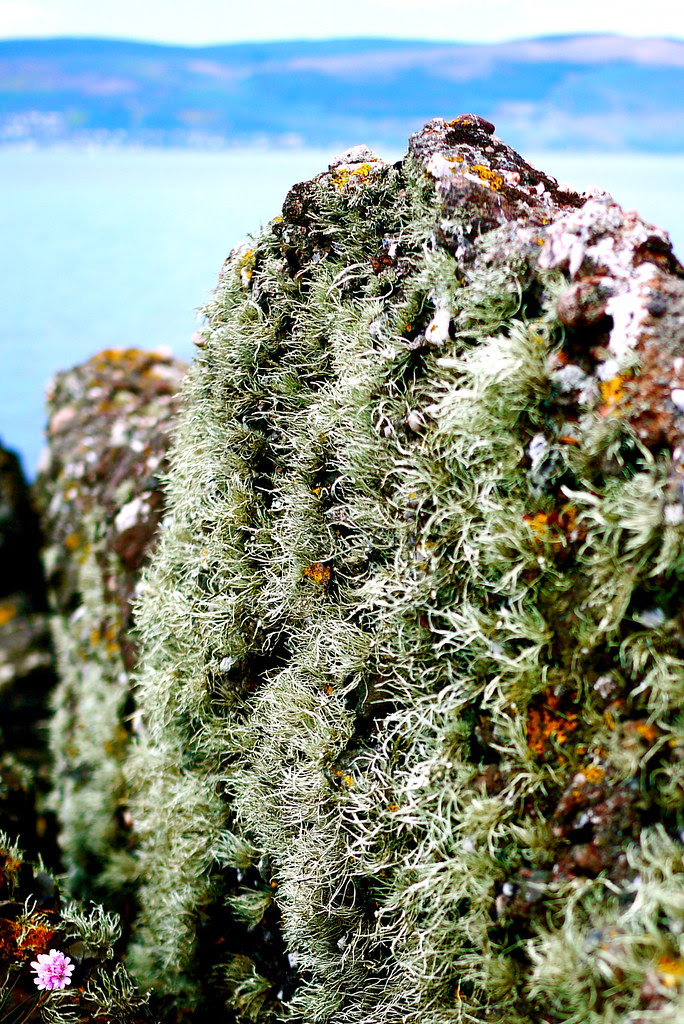 A wee thrift flower nestling in the corner with some moss on a rock. I love moss.

Hopefully I'll be able to take more photos and keep on educating myself throughout the summer. It's something Rosie's interested in so we can make a project of it. Unfortunately there are no robots or spaceships involved, but I'm sure Tom will enjoy it too.
Posted by Seren at 10:33 2 comments: