I'm a little late posting about my Midsummer, which I celebrated last week, but I'll do a rundown just now anyway. Mainly because I took pictures, and it's a shame to waste them...

It's not a time of year I usually make much fuss about, but I do tend make a trip down to the beach to make my own devotions to Manannán - my version of paying the rents, as it were. Usually I make the most of the longer days at this time of year and take myself off to the beach after the kids are in bed, and I can watch the sun start to set. This year, though, considering the weather has pretty much consistently sucked all summer up until the last week or so, I made the most of some dry weather and went during the day, taking Rosie and the dogs with me before having to pick Tom up from school.

Along with the dogs and Rosie, we took some supplies for a wee picnic, and offerings, and we set off to make an afternoon of it. Somebody had left a wee red spade on the beach (continuing a theme from the red jacket I found at Bealltainn, perhaps?), and Rosie set to searching for 'treasure''. This necessitated speaking in Pirate for most of the time we were there, while the dogs 'walked the plank' and rescued sticks from the sea.

I took in the dramatic scenery: 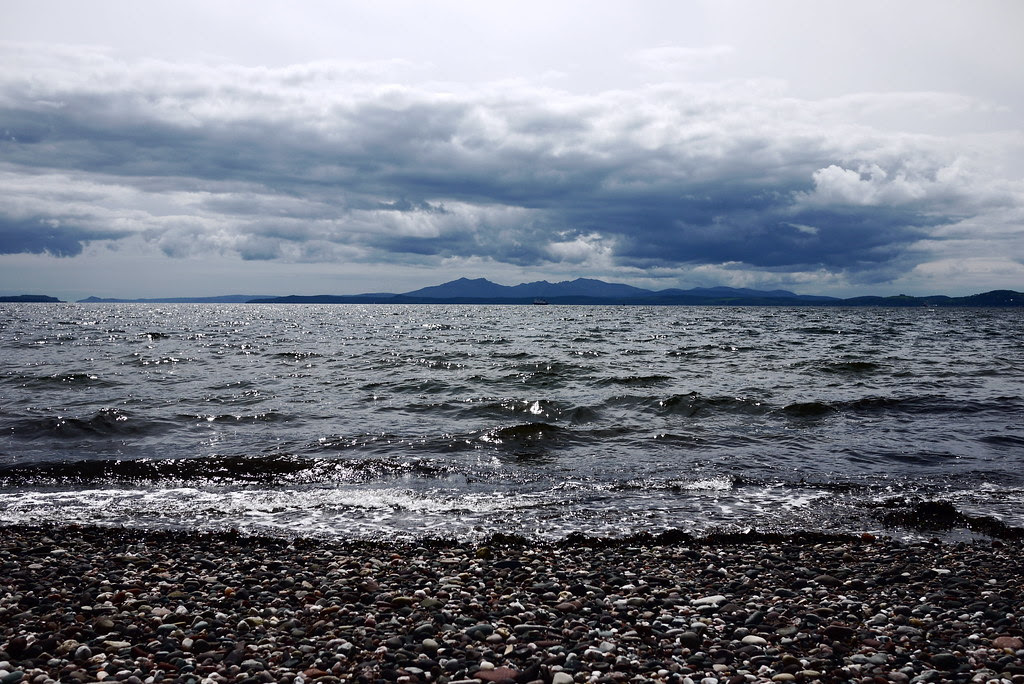 And managed to find Rosie some treasure: 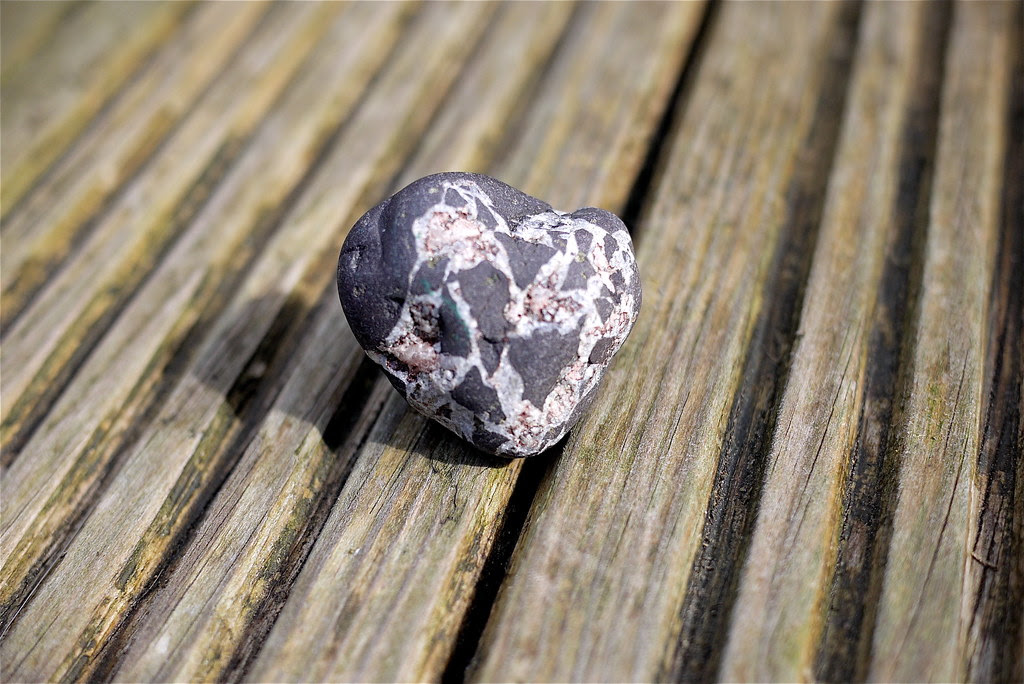 A heart-shaped(ish) rock, which kind of reminds me of the fossil rock I found on my first Midsummer here. I didn't realise she'd kept it until the next day, when she took it to nursery to show her teachers, but she just had to keep it, she said. It's got pink flecks in it.

We built a wee cairn (Rosie insisted on making it a tower, so it's more like a sort-of-cairn): 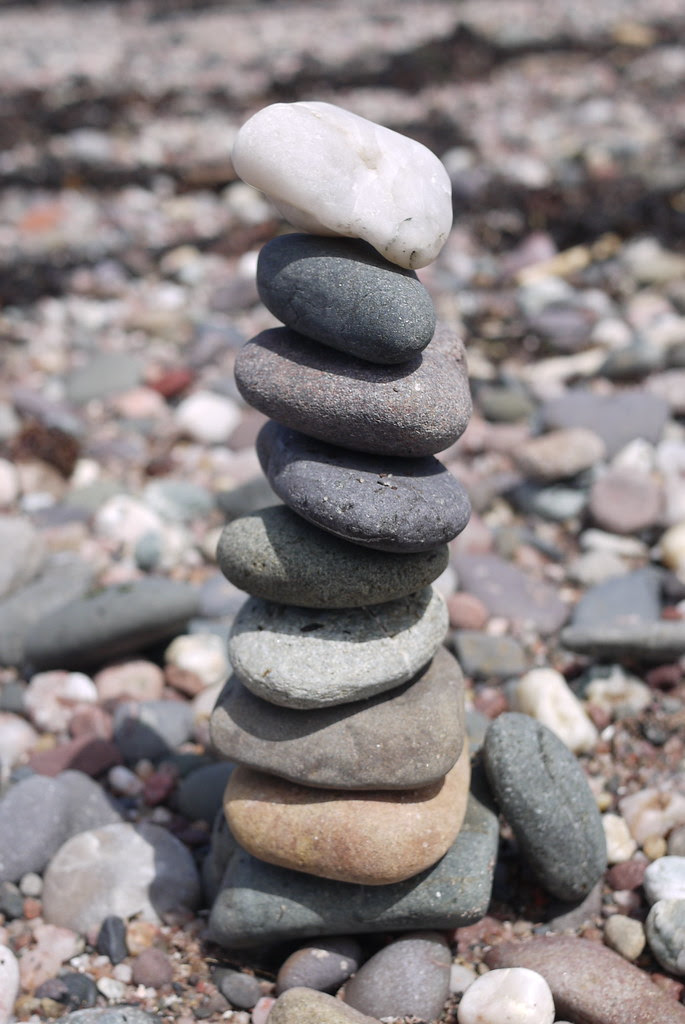 And beside that we left some food offerings after we'd had our picnic. Then we moved off and picked our way over the rocks, to a vantage point where I could throw some silver pennies into the sea and have a quiet meditation; I took an old shilling with me, and found another silver penny in my pocket so figured that should go in too.

On our way home I took Rosie through the arboretum that runs through the middle of the village (the good thing about the summer having sucked, weatherwise, is that at least the midgies have been kept at bay for longer than they normally do. They're only just starting to bite and normally I wouldn't bother going to the woods in the afternoon on a sunny day - we escaped unscathed this time); we hadn't been for a while and somebody had set up a rope swing from one of the trees along the path: 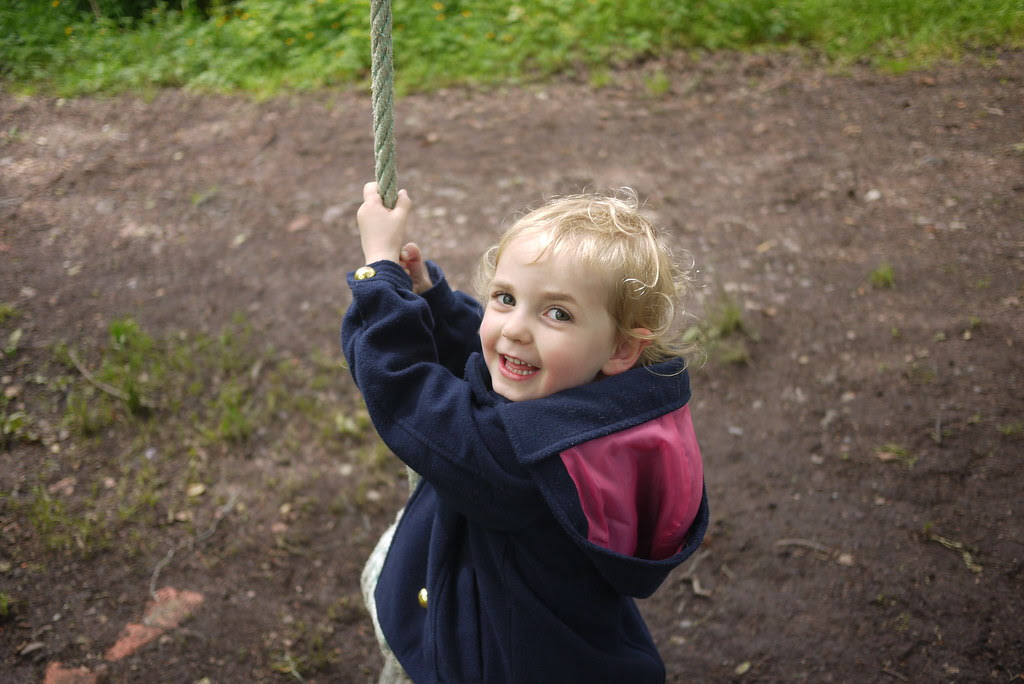 This was a great discovery for Rosie, and we spent some time playing on it before having to hurry for Tom. I suspect we'll be coming back here a few times at least, now that the summer holidays have started.

Seeing as Midsummer coincided with the wrapping up of the school year, we've had lots of school work being sent home. I haven't got round to doing any seasonal murals with the kids so far this year, so instead I put up some of the artwork that got sent home, and which seemed apt. This is my favourite piece, by Tom - pretty good for a five-year-old: 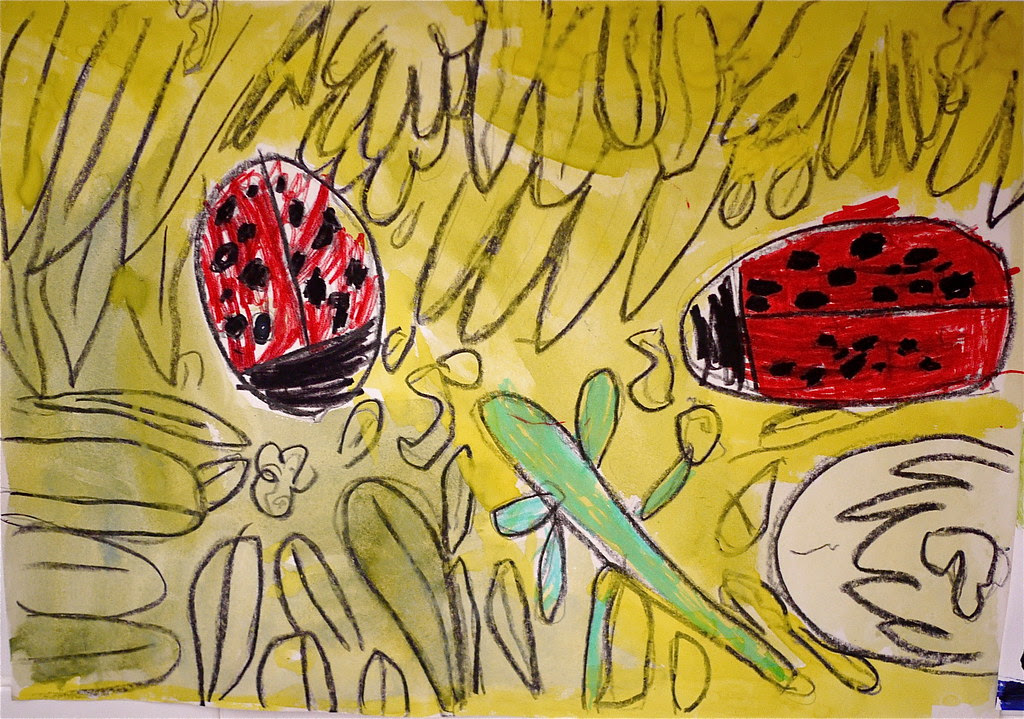 And also, to round it all off and celebrate the end of the school year and the arrival of summer - finally! I decided to make a cake (and cheese scones). At school this term Tom's teacher had some caterpillars, which the class looked after while they watched them grow, and then seal themslves off into their crysallis', and then come out as beauuuuutiful butterflies. Tom was fascinated by the whole thing, and couldn't stop rabbiting on about them, day after day. He was sad that he missed the butterflies being let out into the wild when he was off sick with a cold (although I'm glad they were let go). So it was decided that the cake should be butterfly shaped, and the kids helped decorate it with sprinkles and edible glitter: 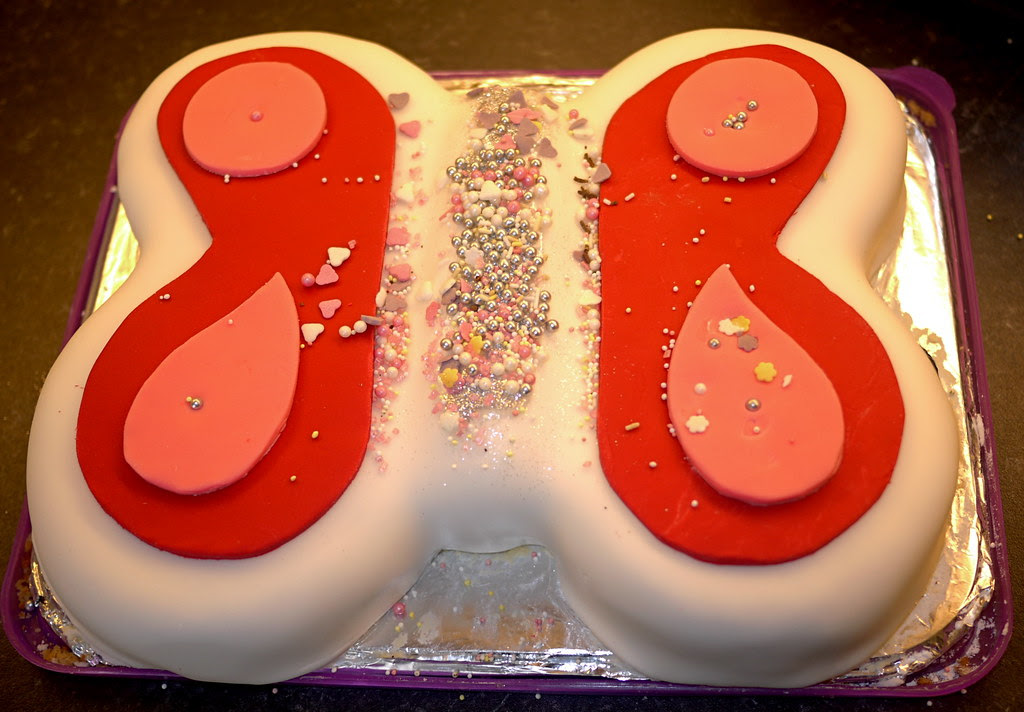 Not the best photo - the flourescent lighting makes for sucky pictures. There's a butterfly farm near my hometown, so the next time we go for a visit I might take the kids along.

And finally, while most of the garden is running rampant and being woefully neglected, the slugs have at least left some of the strawberries alone: 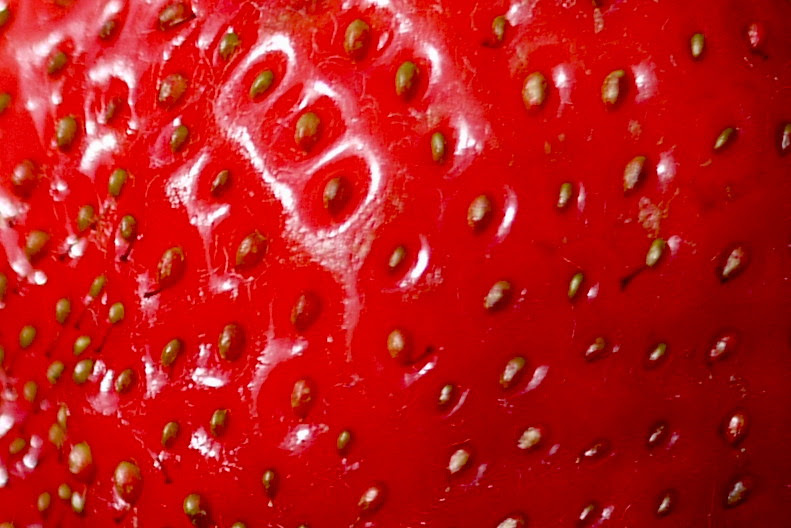 OMNOMNOM. At least I can claim one success this year, if not for much else. It's a nice, bright finish to the celebrations, and the splash of cheery colour feels almost symbolic of the fact that - touch wood and probably famous last words - my back seems to be getting a little better. Or at least, not worse. Here's hoping, though.
Posted by Seren at 17:48 4 comments:

Email ThisBlogThis!Share to TwitterShare to FacebookShare to Pinterest
Labels: midsummer

A while ago, I had a little bit of internet rage about a BBC program on the Celts - here, about the suggestion that some gold 'spoons' were used for divination (followed by a demonstration based on made-upness). The section with that part of the program in it can be seen on youtube now, it starts about three minutes in: hopefully around 1:43:35 in this video (or see the comments for an alternative).