I've been wandering the internet looking for some good sources on folklore and practices (mostly practices, rather than folklore) and I spotted this book going cheap. After looking up the author and seeing that she's a well-respected expert on Irish folklife and traditional folktales, it seemed worth a punt.

I was hoping for a good heftty tome to arrive, but alas, what I ended up with was more like a compact and bijou glossy booklet, offering a fairly basic introduction to some of Ireland's better known tales and lore. It's good for what it is and it offers some tidbits about fairy lore and customs associated with weddings and baptisms and the like, but overall there just wasn't enough in there to really grab me.

It's very Cat'lic in tone, as a friend would probably say, so there's a lot of St Patrick and the miracles of St Brigid alongside retellings of tales like The Second Battle of Mag Tured. Written by an Irish native it gives a good feel for how the lore is taught and known in Ireland today, and the retellings of the tales give a good basic introduction to them along with the mythological landscape. It's lacking in depth, but it's a straightforward and easy read.

For someone starting out, or wanting to refresh their memories, then I think it's a good place to start if things like the Rees brothers' Celtic Heritage or Proinsias MacCana's Celtic Mythology are still a bit of a daunting prospect, but it's not nearly as useful.
Posted by Seren at 09:03 No comments: Links to this post

After receiving a lovely (and surprise) package from a friend earlier this week and discovering a very sad and slightly frosty dandelion in the garden, it seemed like a good time to celebrate Là Fhèill Brighde. I'd been intending to reorganise my little shelf of Important Shiny Things because some of the plants I'd put there when I set it all up hadn't done too well in such a shady spot and I'd had to move them. So it was a fantastic coincidence when my dear friend sent me a flocked Cryptic Crow (because how good is that name? I have my very own Cryptic Crow, nyah) and a wonderful print of one of Graywolf's paintings (of a magpie). Perfect for my shelf, to represent my connection with Badb, and my connection with the spirits through my obsession with magpies. So I dug out a frame that happened to be the perfect size for the picture, and onto my shelf they went: 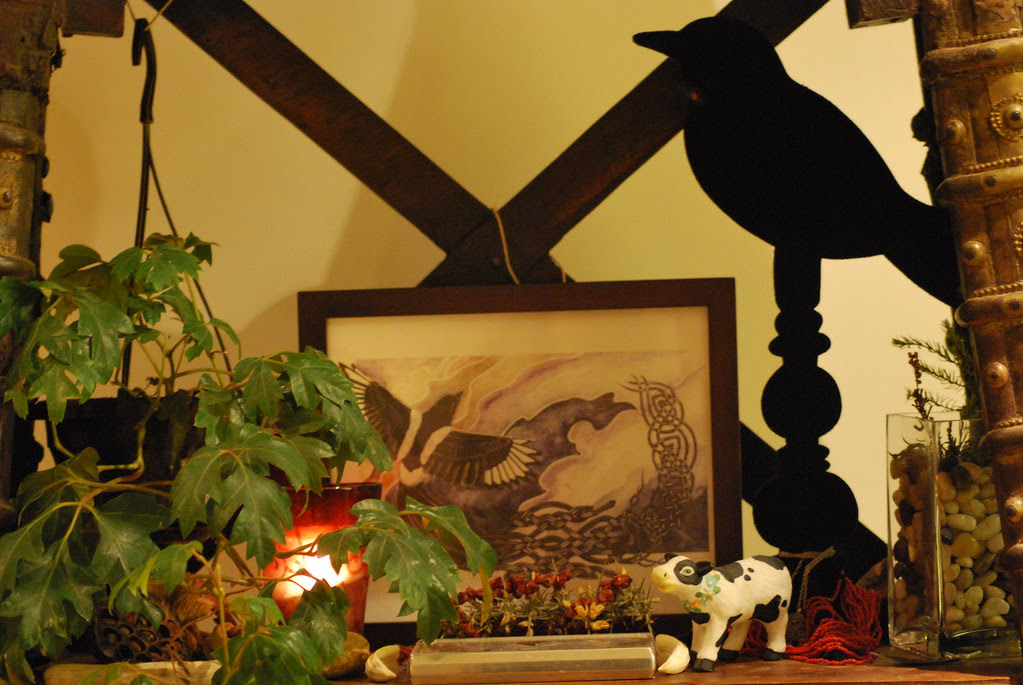 I've had the glass vase with polished pebbles in it for a while, not sure what to do with them, but once I'd put the crow up it seemed like the perfect place to put some offeratory herbs. All the bits and pieces are on there from the last time I posted, but I've added some amber beads around the votive glass and a red coral necklace (both traditionally having protective qualities) around the base of the crow with the prayer necklace given to me by someone very dear to me. The commemorative plaque that belonged to my granddad has the wild boar tusks from Graywolf either side, he'd appreciate that. The gorse and rowan berries are from Lùnasdal, and there's a space left for the applewood wand (I used it in my ritual for the evening, as I did last year). I also made a clay plaque, incised with a snake pattern and then painted, as a devotional offering (it's hiding behind the leaves, I think). I think I'll keep it there until I make another one for Bealltainn.

Rearranging it all took up a good chunk of my quiet time while Tom was at nursery and Rosie was napping on Wednesday, along with some sorting out some mundane things around the house. I went out to the garden to see what was left of my flower bed, too; Mungo's had pretty much everything I planted last year, so I'm going to have to replace it with nasty evil spikey things that will discourage his frolicking across it. He's ripped the top off of the rowan I planted last year but it still seems to be alive, it's got some buds starting to sprout on the trunk (but I think I'll have to thin them out a little). There were still some heathers holding on for dear life, the chamomile is thriving and some sage and hyssop were lurking quietly and trying not to be noticed. I was hoping the rosemary had survived, but no such luck, so I picked some of the white heather, hyssop and chamomile for offering to Badb and to inaugurate my newly organised shelf. I've done as much as I can do at the moment, but I think it needs some dangly possibly sparkly things. The magpie needs to feel at home, neh?

Picking Tom up from nursery, we took the dogs for a walk in the woods to see what we could see. There were still patches of snow and slush around, the gorse was in flower, a few of the trees were starting to bud, and the view was spectacular: 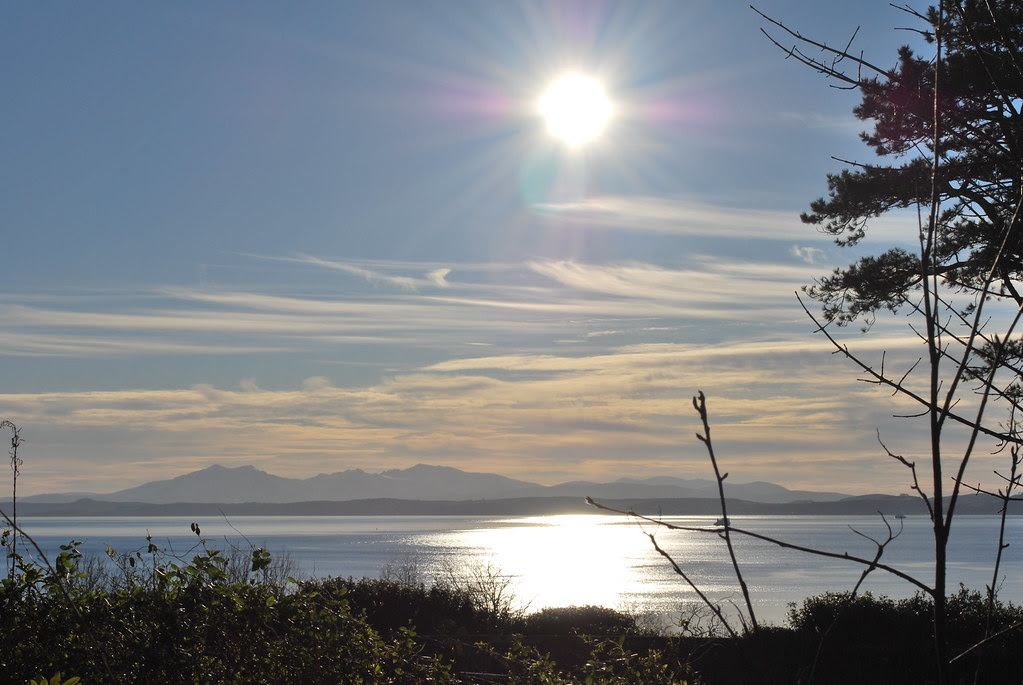 It never fails to grab me. When Bute and the mountains of Argyll are all hazy like that, it really is like you're looking into the Otherworld (or how I'd imagine it to be). Unfortunately, however, my sense of wonder and ponderings on such a magical view were broken by the sudden realisation that I'd left a candle burning on the shelf from when I'd made the offerings to Badb earlier. Mild panic ensued as I made a hasty retreat back home, convincing myself that the house was burning down. It wasn't, of course, and the candle had either burnt itself out or I'd remembered to blow it out after all.

Dinner followed, with roast lamb, potatoes roasted in a garlic butter, mash (mainly because some of the roasties disintegrated a little, I'd over par-boiled them), sprouts, carrots and cauliflower with a chestnut, orange and cranberry stuffing. I made enough for a plate for Bride as well, with some trepidation - does she like sprouts? It's a controversial choice of vegetable...

Once the kids were in bed, I made some more offerings to start things off, performed a saining with incense (the water I'd saved from last Bealltainn having been recently Rosie'd, but the incense seemed more appropriate for Bride anyway) and set about finishing off my dealbh Bride - I wasn't entirely happy with the result, because I was a little hampered by a lack of needle and thread and had to make do, but Rosie certainly seems to appreciate it; I nearly had to fight her for it after I stuffed it the day before. I laid it on a bed of straw and placed the apple wand with it, then went to the kitchen door and invited Bride to come in and took a while to meditate and contemplate. It's been a stressful start to the year with Tom starting nursery and not settling in too well to start with, along with several colds and a stomach bug (part of the reason why Tom freaked out, he started well but then he was sick at nursery and got scared because I wasn't there, with abandonment issues following. He's fine now, but it took a while), so with the weight of all the stress the saining and some time to really clear my head as well was welcome.

I did some divination with the ogam fews I made last year and seemed to get a good response from it. I pick three fews and read them as representing passing influences, present influences and future influences. I got hawthorn as the first pick which certainly seemed to make sense in terms of the general negativity the year seems to have started with, but the rest seemed fairly positive and seemed to indicate the saining had been effective and that my offerings so far had been accepted by Bride.

I was going to make the bannocks in the morning, but decided to make them that evening instead. This time I tried Fife bannocks, which are quite scone-ish in consistency. I was pleased with how they turned out, even if they did end up being a little overdone, and they didn't break, which was another good sign. I think I used a little bit too much milk, but they still cooked well and were easy to make.

A little relaxation followed, with a hot bannock, butter and jam, and I was off to bed, making sure the food for Bride was well out of the dogs' reach. I slept well and deeply, and I'm sure I had a very odd dream but can't remember it...As usual Tom and Rosie gave me the early morning wake up call and we had a cuddle in bed as I hoped to buy a few more minutes to ease myself into the day. The dogs seemed quiet, though, which was unusual because Mungo usually can't wait to be let out first thing, so I dragged myself out of bed and trudged downstairs to find the kitchen doors were wide open. I've no idea how that happened, unless Mungo's figured out how to unlatch two doors, and I took it as a pretty definitive sign that Bride had been...I'm guessing Mungo must've figured out some way of opening them, probably with the help on the kids fiddling with the latches with me knowing, but his timing was very apt. And I didn't give him too much of a stern look after I checked to make sure we hadn't been burgled.

Evidently Bride does like sprouts after all.
Posted by Seren at 01:25 No comments: Links to this post