Somehow the solstice managed to sneak up on me almost unawares, so plans ended up being a little impromptu, to say the least. I had a vague idea that I'd go to the beach and do...stuff. Like I usually do. But beyond that my brain hadn't really got much further.

So it happened that the solstice was at the weekend this year, and seeing as Mr Seren was working, any plans would have to include the kids. I usually like to go to the beach around sunset, if I can, but that would be too late for the kids. In the end, after I explained to them that what "solstice" means, we decided that an early evening picnic would be just the thing. We prepared a wee feast (and offerings) to take with us, and set off with the dogs for a long walk.

This year I've pretty much given up on gardening - not for lack of enthusiasm, but because I know it's just too much for me to able to handle. Although I'm doing a lot better these days, my back is still a delicate and temperamental beastie, and overdoing things doesn't go well for me. A lot of the containers I've been using are pretty much done for now, and replacing them will involve too much heavy work, so I haven't planted any veg this year. Instead, I'm just concentrating on the fruits that are happily chugging along left to their own devices, but a side effect of my general gardening neglect is realising that what I had thought was a weed that was trying to propagate itself all over my flower beds is actually a type of rush. Which is very timely, considering.

The first Midsummer after moving here I took a long walk through the village, down to the beach where I made my offerings. That time I found a rock covered in tiny fossils: 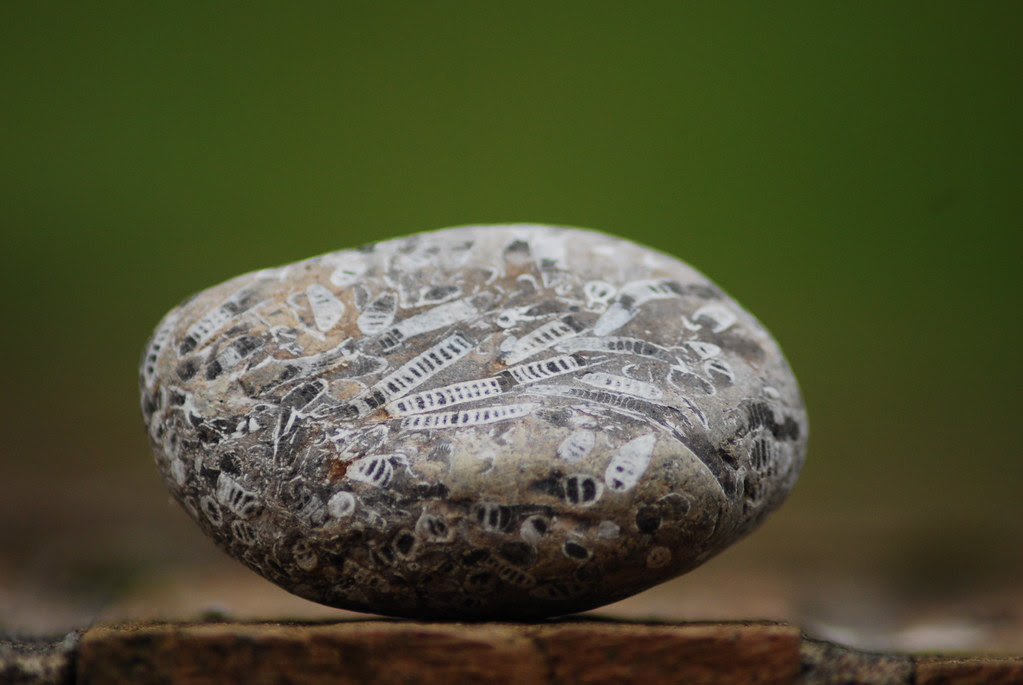 I took it home with me, interpreting it a sign of some sort of gift of acknowledgement (as I noted in a long and rambly post here), and it lives on my shrine now.

And like I said in that post, it's not a fossily beach. Since finding that fossil, I've not found another one at all, in spite of keeping a lookout for them whenever I go. Except yesterday, while we were having our picnic, Rosie found an even bigger rock that's covered in the exact same fossils - right where we were sitting: 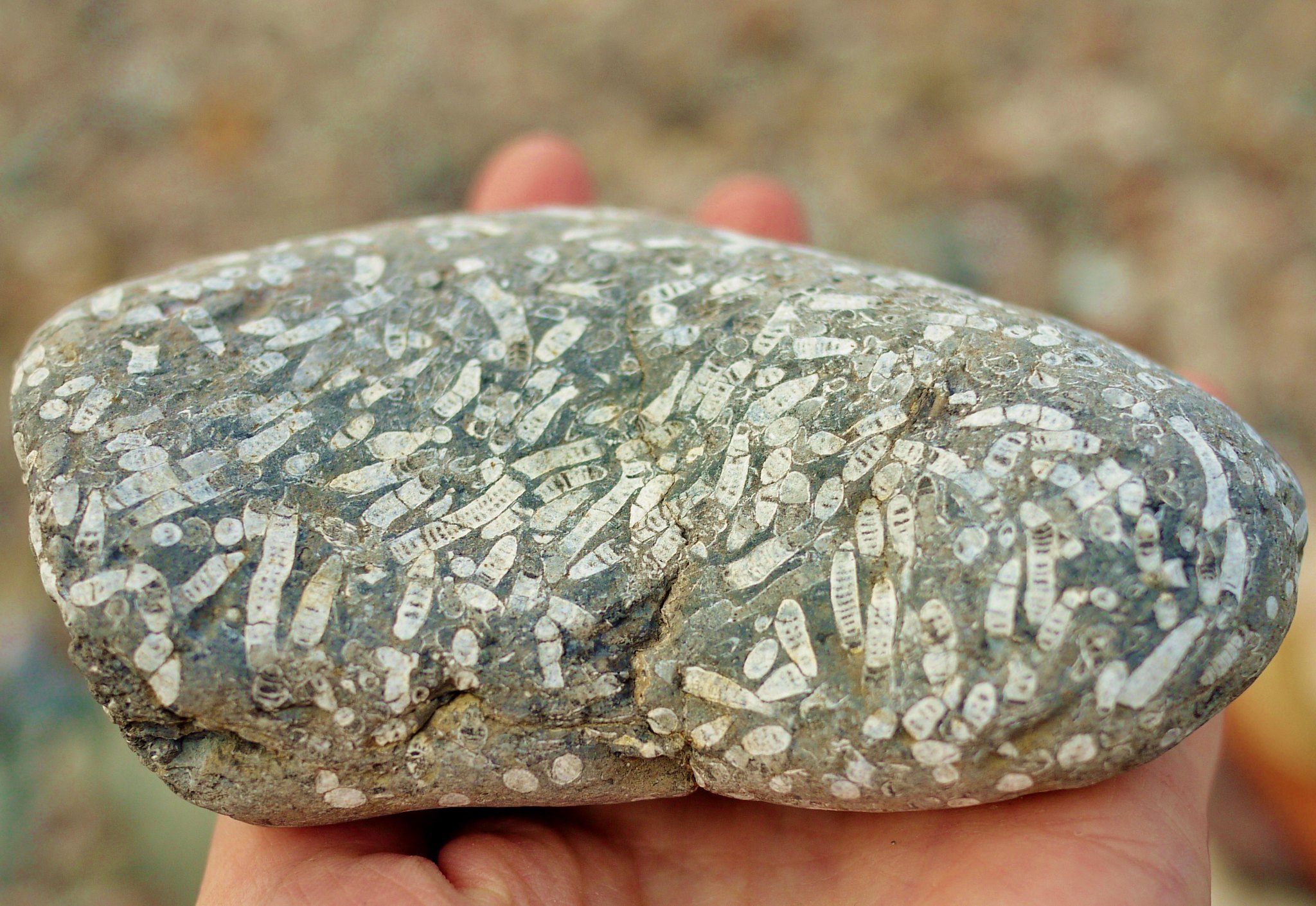 I suggested to Rosie that she should ask the beach if it would be OK to take it home; we mustn't take things without asking. So Rosie asked, and cocked an ear briefly, and then said yes, the beach said we could take it home. But we had to give something back in return. We had to feed the beach as a thank you.

Luckily I'd come prepared, with some things as an offering to Manannán to "pay the rent," along with some offerings to the spirits of the beach. We built a wee cairn right by where we'd had our picnic, like we usually do, and picked up some of the litter that had been left by previous parties: 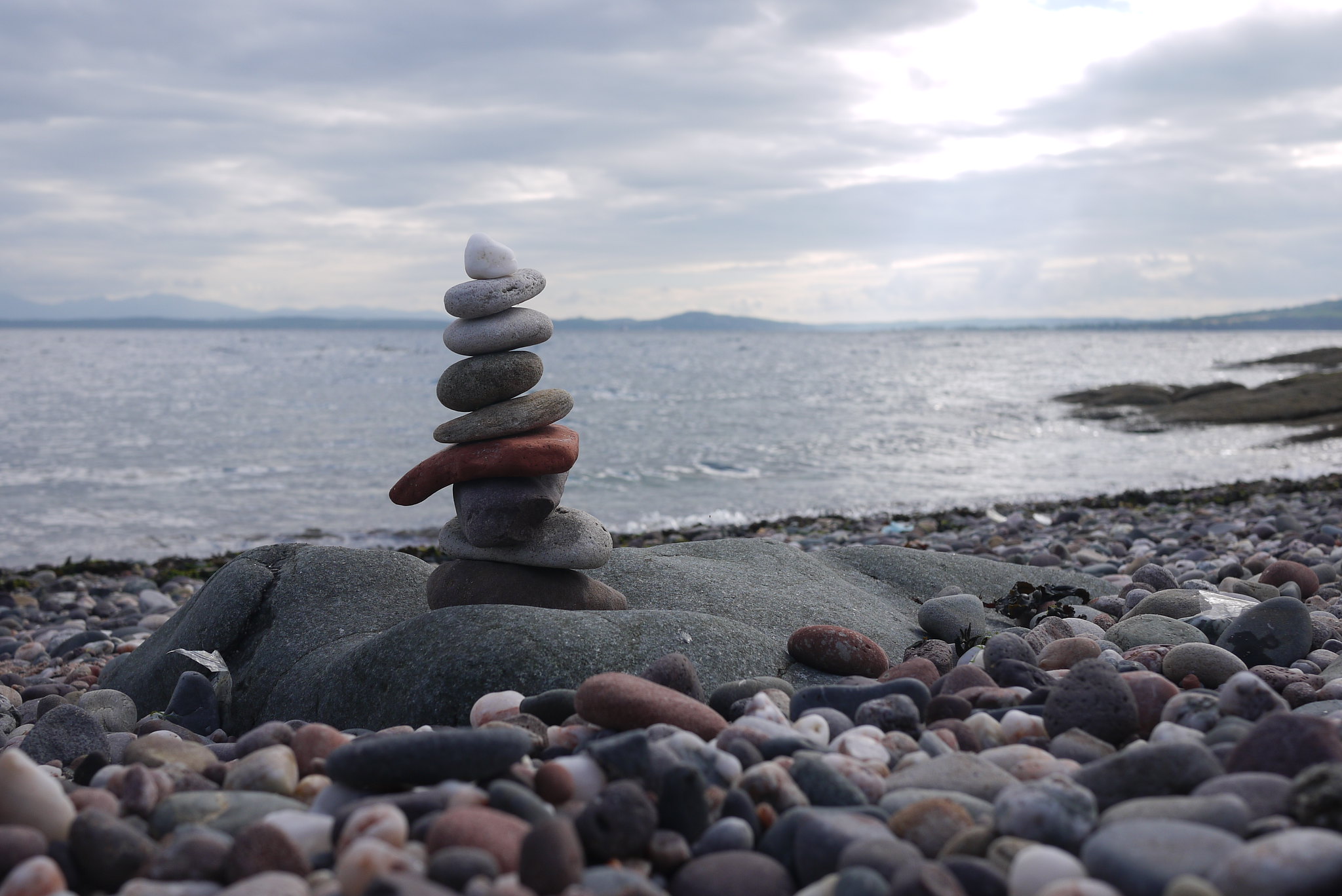 And after the dogs had had a good run around and a swim, and Tom had given Rosie some lessons in skimming stones: 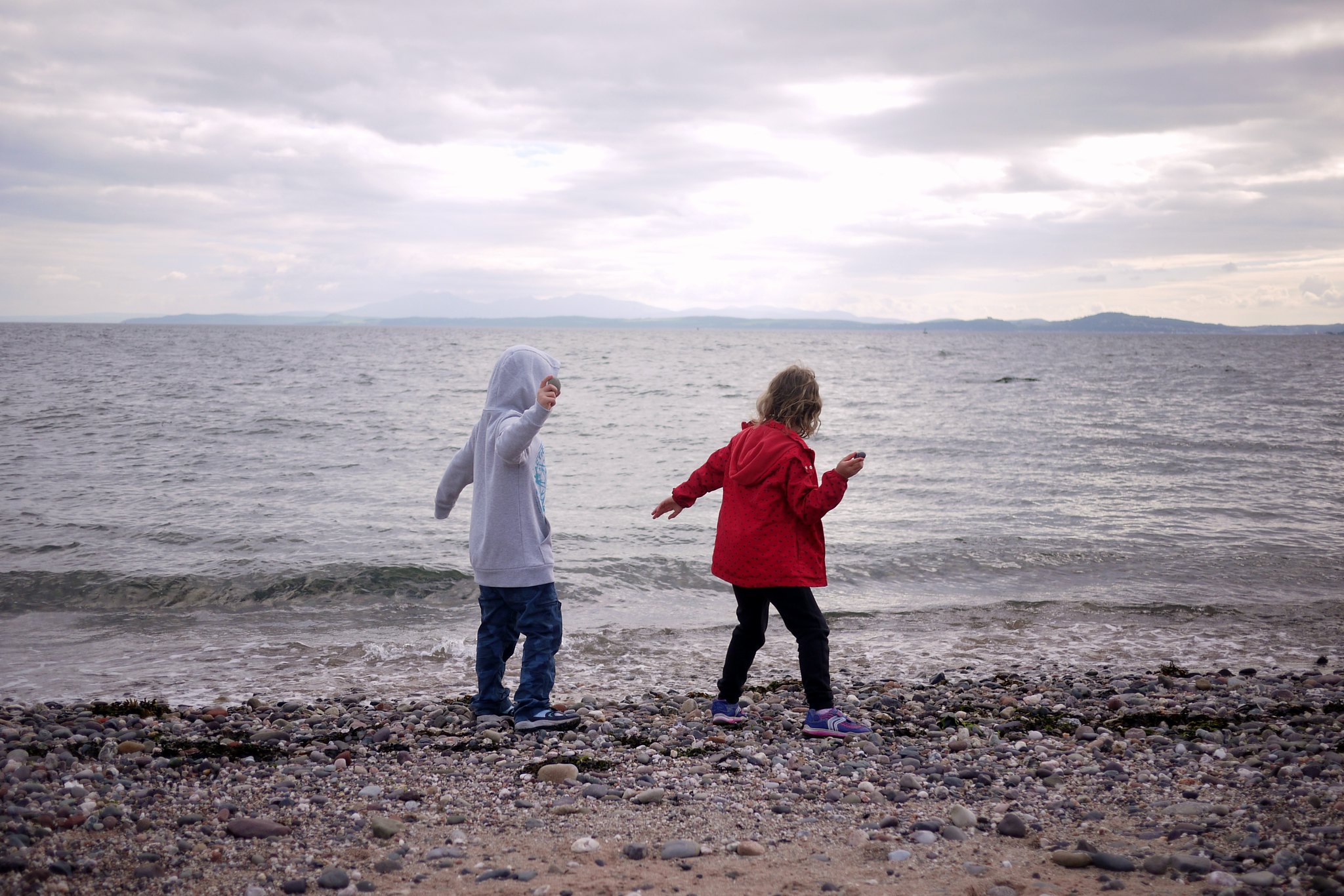 We headed up to the rocks where I usually make my offerings. First we made our offerings to "feed the beach," and both Rosie and Tom insisted that they should do it themselves, so I gave them some of the food I'd brought and left them to it while I prepared the offerings for Manannán: 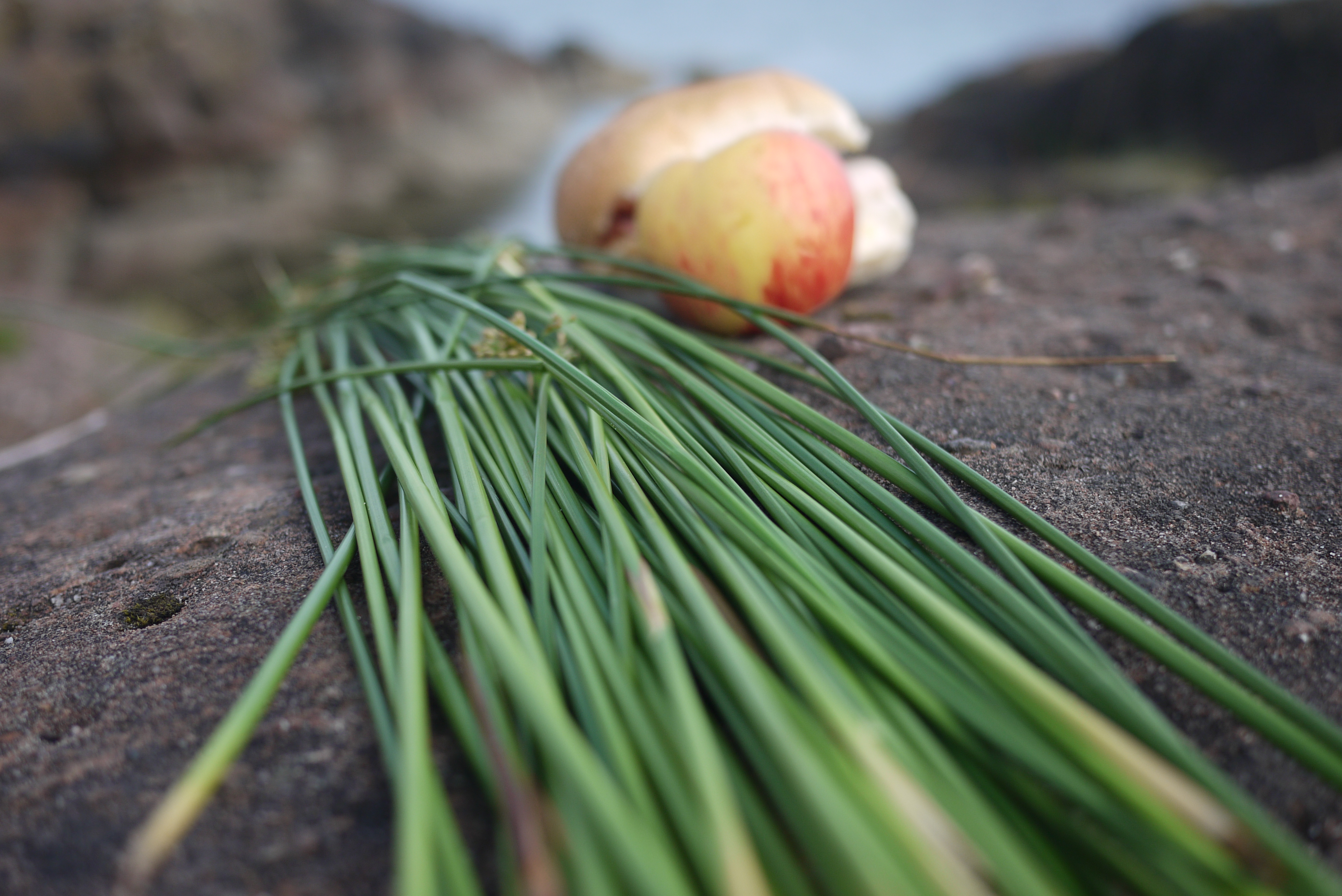 It's the first time that Tom's asked to take an active role in anything related to our celebrations - I'll invite them to watch and join in with the words if they want to, and sometimes he does, but Rosie's always been much more interested in taking an active role than her brother has so far. So this was the first time he's really done anything by himself. He asked about all the different kinds of ways he could say thank you (in Gaelic - they've been learning a bit. Slowly), and I gave him a few ideas of what to say and he put them together into his own prayer.

When the kids were done, I climbed down into a wee cove to pay the rents while the kids watched the dogs and made sure Eddie didn't decide to take a dive down to join me. Tom started singing a random song as he wandered about on the rocks, and Rosie clambered down to be with me while I prayed and made my offerings. Once I was done, I climbed back up on to the rocks and made a libation (I don't like to pour drinks into the sea, in case it upsets the sealife), and the kids followed suit with some of the juice they'd brought with them. Tom wanted to know if Manannán has a trident like Poseidon does, and was very disappointed to hear that he doesn't. He suggested that we should make him one, while Rosie suggested that we could make a small boat and put messages in it that we could send to Manannán out at sea.

Just as we were chatting, the sea suddenly began to make a roar - the waves picked up and the acoustics in the cove must have amplified the sound, and the sudden noise was startling. The waves rose and lapped at the offerings I'd laid down, and they started to drift away. The kids gasped and got really excited and Tom decided it was awesome. We all agreed that our offerings had been well-received.

Rosie's resolve to make a boat for Manannán was cemented, and as we made our way home it was all she could talk about. By the time we got home we were all pretty tired from the long walk and the excitement, and we all just collapsed for an hour or so before the kids had to go and get ready for bed. I even had a short nap.

All in all, it's one of those times when I'm reminded that even the most impromptu kinds of observances can make for pretty powerful experiences, and being able to share it with the kids puts a whole new perspective on things; thinking about what it all means to them. Thinking about how it will shape their outlook as they grow older, and the kinds of things they'll look back on as being meaningful moments. In a way, it makes it all the more meaningful to me, as well; it adds layers.

But for now, the days are growing shorter and the summer holidays are looming. Six glorious weeks of no homework, as far as the kids are concerned. We'll hopefully manage a family holiday away at some point, and the kids are going away with their cousins and Nana for a while, too. One thing's for sure is that there'll definitely be a few trips to the beach again, if the kids have anything to say about it.
Posted by Seren at 15:47 1 comment: