It's been a weird, weird few weeks. I think, in fact, the last few weeks have been the weirdest of my life... It started with a terrible tragedy – we had to have Oscar put to sleep. It progressed with the sudden death of an old friend, which snowballed into some awful revelations for her flatmate. Then it was capped off with my kids receiving a suicide note over Skype from a friend of theirs (he's eleven! But no, it wasn't a joke, and yes, he's OK and getting the help he needs now). And those are just the "highlights."

I mentioned in my last post that Oscar had been diagnosed with epilepsy this last year, and also commented that it's been a bumpy ride... Well, he hit one bump too many after he ate something he shouldn't have, it got stuck in his stomach and it became clear he needed surgery, but the stress of his illness and inability to keep his medication down set off a massive cluster of seizures. In spite of truly heroic efforts (and doses of various medications), the vets were unable to stabilise him and just weren't going to be able to operate. He just didn't stand a chance and on their advice we had to do the kind thing and end his suffering.

As a parent, I think death is one of the worth things you have to deal with. Just seeing their faces crumple when the realisation hits. The emotions, the questions. It's certainly harder when it comes to losing a human member of the family – like their Papa, last year – but that's not to say it's easy when it comes to the furry members of the family. As wonderful and enriching as it is to have a small menagerie in the house, it's always upsetting when the inevitable worst comes to the worst for one of them.

Poor Oscar wasn't yet three years old (it would have been his third birthday come Monday, in fact). It was just after we got him that I discovered a lovely woodland not far from our house that I hadn't known existed until my neighbour pointed me in that direction, and it soon became a favourite place of mine (and Rosie). Rosie loved it so much it even inspired her to poetry, so it was devastating to find the whole woods completely cut down only a couple of months later. It went from this: 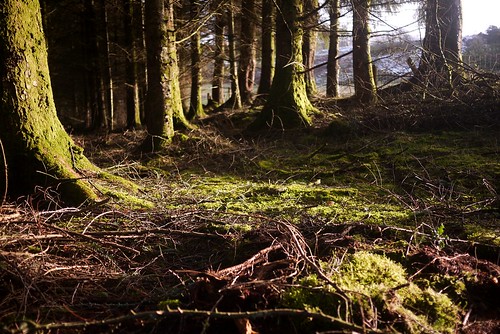 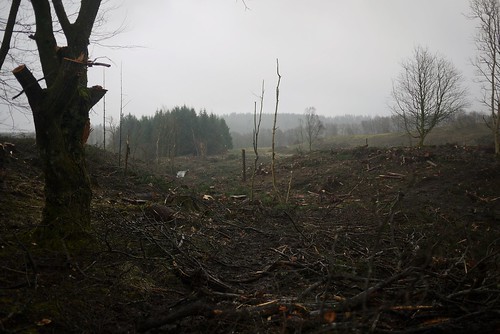 In the blink of an eye.

At the time we didn't know what had happened – as far as I was aware there hadn't been any notices about logging in the area or anything like that, though I'd assumed that a commercial purpose was the likely cause. Well it turns out that wasn't the case...

I hadn't walked that way in quite a while but I suppose, with Oscar gone and Mungo all on his lonesome (no one will play Bitey Face with him in the morning now...), I was feeling a little nostalgic about our walks out that way. As a puppy, Oscar was terrified of water so he'd refuse to cross the shallow part of the stream you had to cross to walk deeper into the woods. His attempts at being brave and big were cute, with the noises he'd make like he was telling himself off as he tried and failed to muster up courage, and it was a big day when he finally succeeded in taking that leap into the unknown and got his paws wet.

So off I went with Mungo this afternoon, wondering (hoping) if they'd maybe replanted yet, and as I walked passed I noticed that there were a bunch of signs up everywhere. The signs explained that the trees were cut down due to a disease that's been spreading through larches in the area, and the only way to treat the disease is to cut the trees down. The signs said that quick action was needed, explaining the unceremonious nature of the logging, and they described what the disease is and how it's spread. And that in time, the woodland will be replanted.