The house that Rosie built

Bliadhna mhath ùr! Happy new year, I hope you had a good one...

It's been a while longer than I intended with the first post of the year, but it's been a busy busy start to 2015 here. In amongst trying to get all the useful stuff done, there have been lots and lots of walks with the dogs while I hope - in vain - that Oscar might tire himself out for once, and with the reappearance of my camera charger I've been able to get out and take proper photos again (I'd been using Mr Seren's Canon but I don't like it so much).

So as the winter finally seems to be getting a decent grip there have been lots of bracing walks around the village, a lot of the time spent wending our way through the woods or down to the beach so the dogs can get a good run around without getting into too much trouble. The weather's been pretty rough lately, and so have the seas, so Oscar hasn't had a swim yet. He's not that keen on water at the moment, but he likes to sit and sniff the air and try to look majestic before running off to steal whatever stick Mungo might have found: 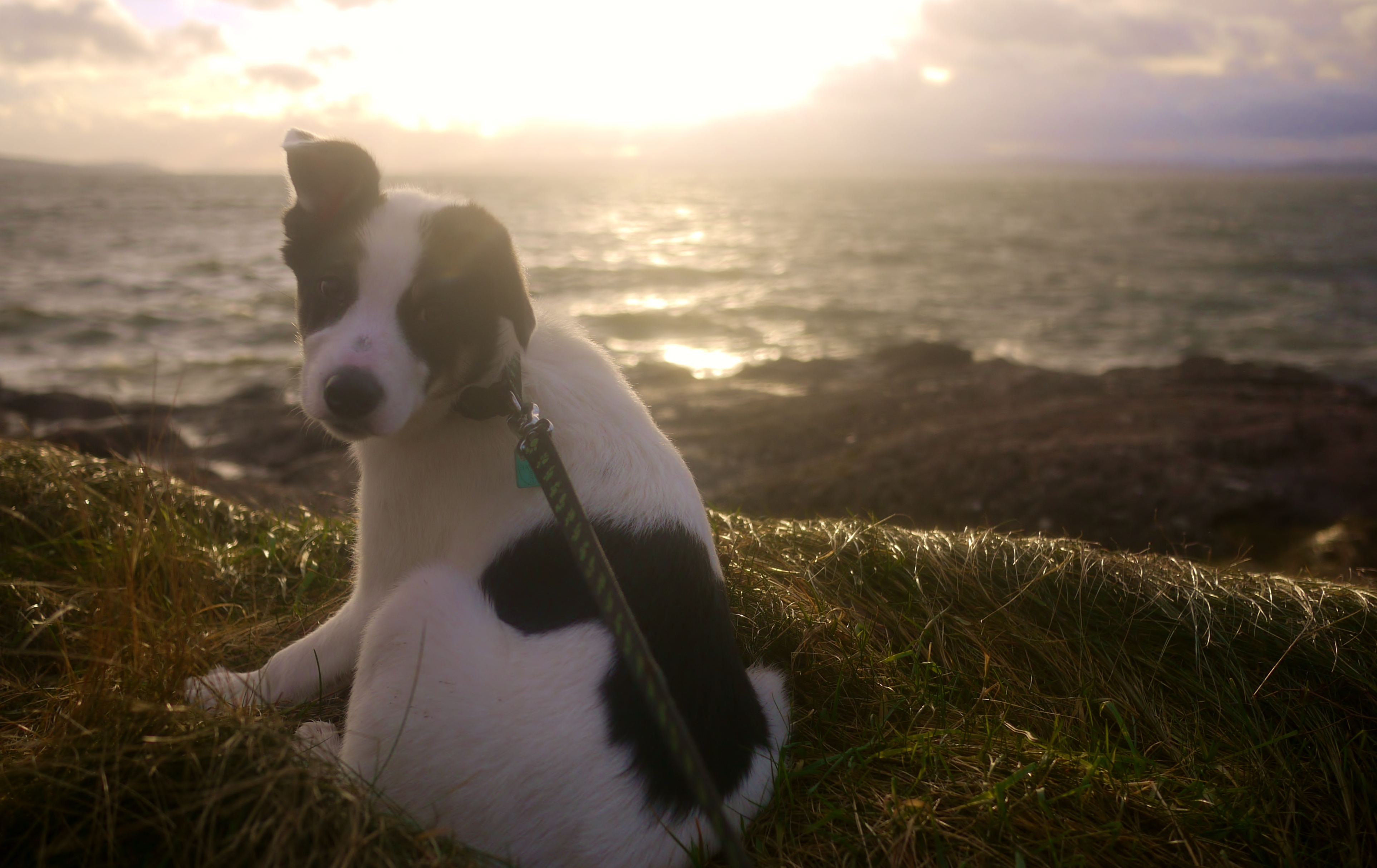 And as I walk along the beach, or make my way through the woods, I'll stop to make an offering or two, and say hello to Eddie as I look out to sea. With the storms we've been having, I've been making lots of offerings to the Cailleachan as well. So far they've chosen to spare us, thankfully, barring some minor fence damage back in Novemeber.

Our neighbour, who very kindly fixed the fence for us, told me about a spot just outside of the village that I'd never heard of before. It's nice and quiet, so good for letting the dogs off the lead and not having to worry about Oscar trying to herd cars, so I set off to go and have a look as soon as I could. It's a truly amazing and beautiful place, and I finally got to take some photos to share in the last week. It's quickly become a favourite spot with the kids, too (although Tom isn't as keen because walking).

It's a wooded area with a burn running through it, which is all pebbly and twisty turny, with waterfalls here and there and small streams joining it. The sound of the water trickling along is peaceful and calming, and at the spot closest to the entrance the water is shallow enough to cross so you can find a path to walk along and get further into the woods. To begin with we didn't go far, mainly because Oscar refused to get his feet wet and got upset if Mungo and I went too far away from him. So for our first couple of visits we mostly stayed in the main part closest to the entrance:

It's all pretty desolate and wintry at the moment, but come the spring I expect there'll be some flowers to brighten up the place.

After a few trips Oscar finally decided to brave the water, so for once we got a chance to really explore the woods and I found a much larger waterfall. Not huge, but impressively loud, at least: 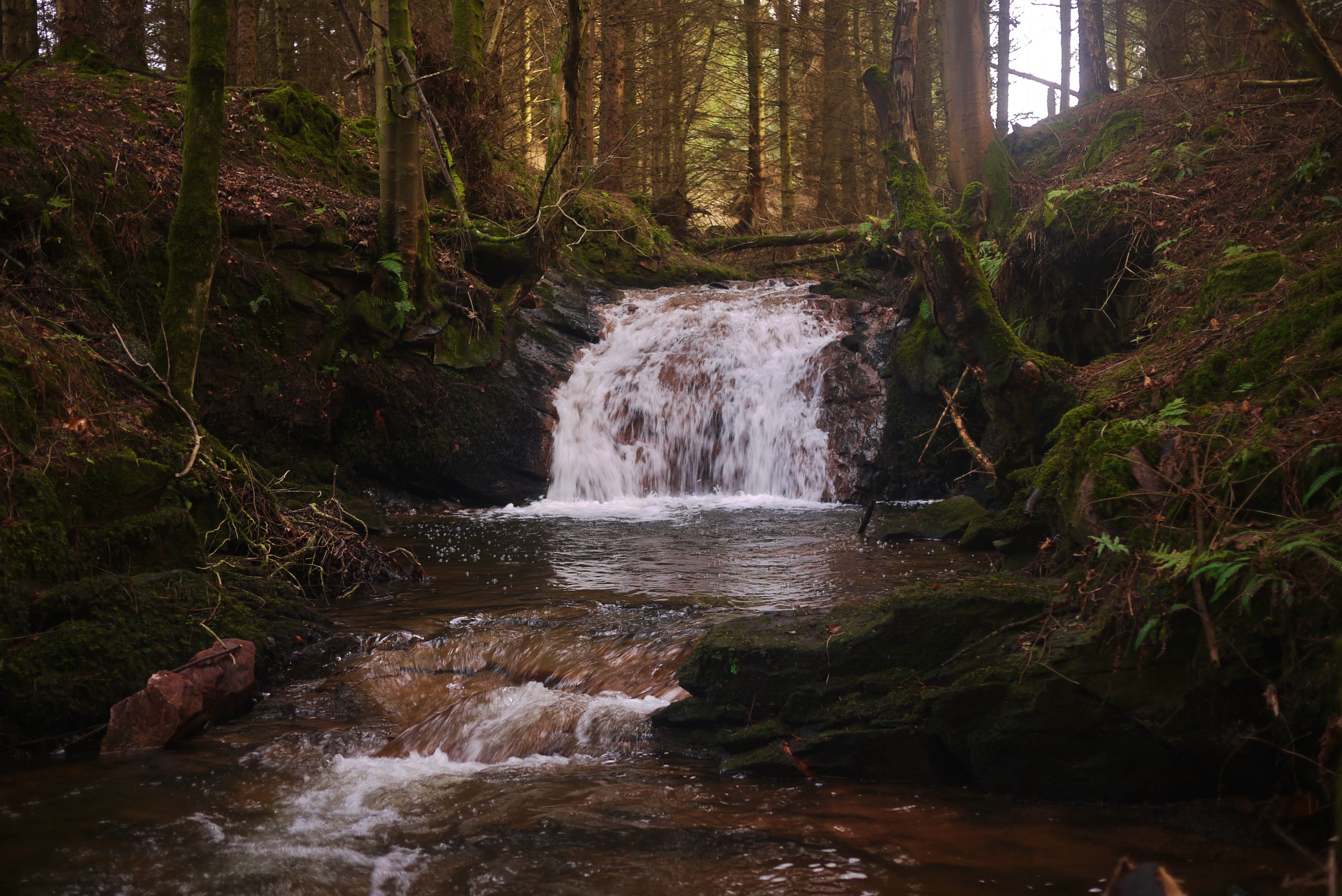 Photos can't really do this place justice. I can see a day or two in the summer spent here, having a picnic, paddling around in the cool water, and building little dams with the kids. My nephews will love it here, too, when they come to visit again.

The water must be pretty high given the amount of rain we've been having, and you can see how mossy it all is up on the banks. Oscar likes to bury his face in the carpets of moss, pressing his head into it as far as possible amd snorting and snuffling into it, but it's the mossy tree trunks I love the most:

And the way the light shines onto it and gives it an ethereal glow: 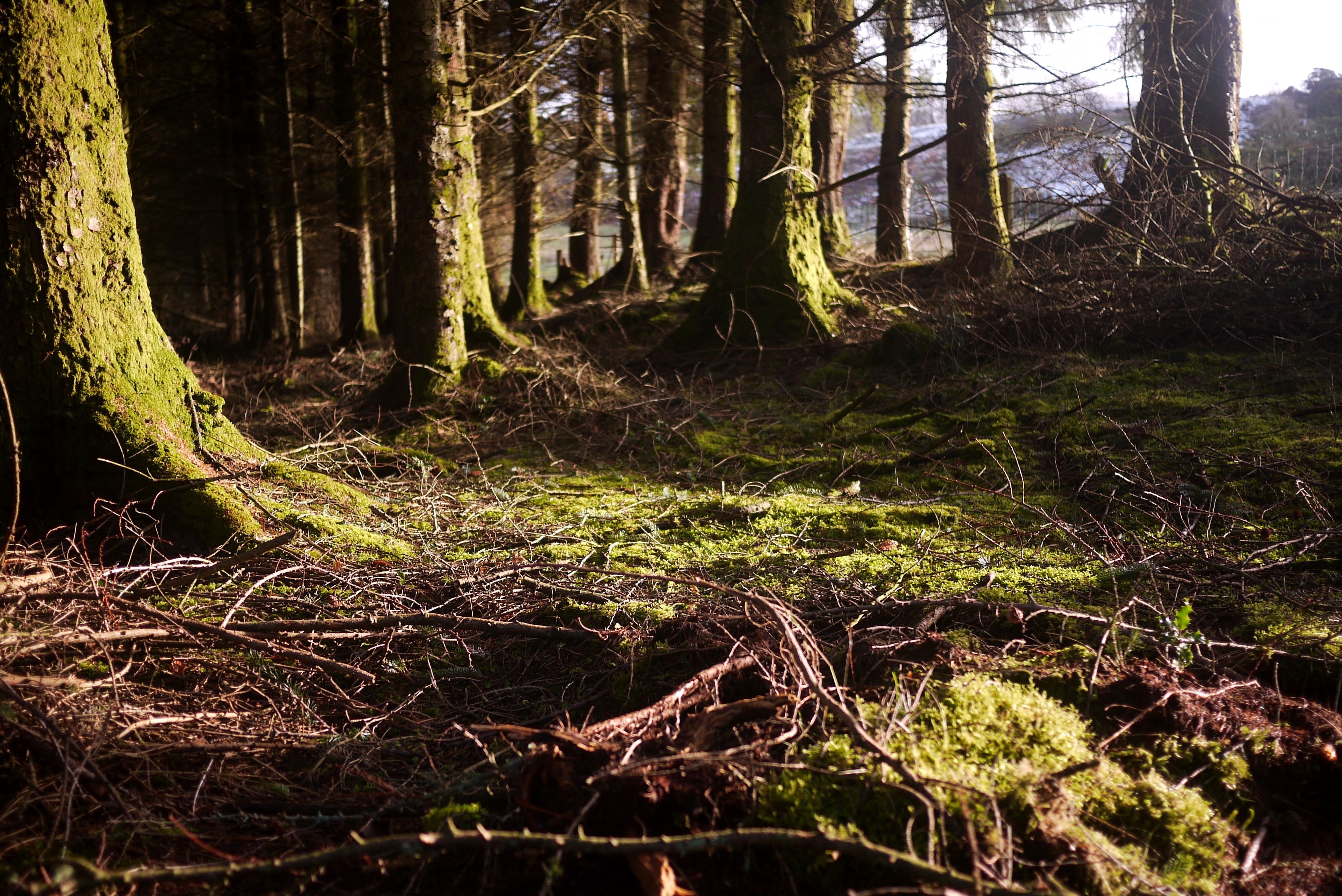 The banks of the burn are very sandy and soft, and when I first brought the kids with me Tom spent most of his time making sandcastles, while Rosie collected a bunch of fir cones and bits of bark to make "houses" for the spirits. Or spiders. Whichever... On our last visit yesterday Rosie decided to fix the house up - the bad weather we've had messed it up a little:

And we left some offerings as we usually do - some nuts, so they'd be woodland creature friendly. Tom had stayed home because he wasn't feeling too good, so it was just me and Rosie this time. I took her to see the waterfall and we had an adventure through the woods (a bit more of an adventure than intended after very nearly losing a boot to the mud). Rosie went looking for bits of bark, which she found floated on the water, so she decided she keep them for boats to leave by the spirit houses; she built a little jetty at the bank of the burn for them as well.

On our way back to the wee house, to leave the boats, Rosie spotted a skull on the floor. I'm not sure what kind of animal it might have come from, but it's pretty cool looking:

After our visit yesterday, Rosie decided to write a poem about her house (I asked her if I could share it here because I think it's pretty good for a seven year old and she's been wanting to start a blog of her own - she's a little too young yet, though. I've given it a bit of punctuation but it's otherwise Rosie's work):

The trees are green
and the door
is yellow and orange.

There is a flowing stream
to take your boat
out for a spin;
there is bark
for spiders to live in.

Fire is a place
in a stone triangle;
the stream is long
and blue
with a white touch.

I've been making
a home for animals;
four nuts for squirrels,
one already open
and one tiny tree.