There have been more than a few storms around these parts lately, and while gales are par for the course for us at this time of year, I've never experienced anything quite like this since I've lived in this part of Scotland. Granted, only for the past four years now, but still. The ferocity of these storms - with winds well into official hurricane strength territory - is beyond unusual.

Tuesday's storm was the most ferocious for us, and there was another weather warning last night - though this one wasn't as bad by far. Tuesday's storm was rather unexpected for us, being woken around 5am with the house actually being shaken by the strength of the winds. A little disconcerting to be woken up like that. We ended up giving up on sleep and watching the storm doing its thing - rubbish bouncing down the street, trees threatening to come down, wondering what the hell that bump, thump, or crash was...And so on. One of those bumps, thumps, or crashes was the fence between our patio and our neighbour's caving in - the fenceposts simply snapped under the force of the wind (technically it's the neighbour's fence, so he has the responsibility to fix it, though we've offered to help in a neighbourly sort of way). Other fences up and down the street suffered a similar fate, with much of it ending up strewn across roads and pavements. Eventually - and this was the biggest calamity of all as far as the kids were concerned - our satellite dish was blown out of alignment. It's fixed now, though, so all is well with the world again.

Yesterday, I decided to actually leave the house for once, and took the kids and the dogs for a walk around the village to see what the damage was. We didn't brave the seafront - far too wet and windy for that - so we hunkered down into our coats and hats and headed towards the woodland that runs through our village. The cost of the storms was great as far as the woods are concerned: 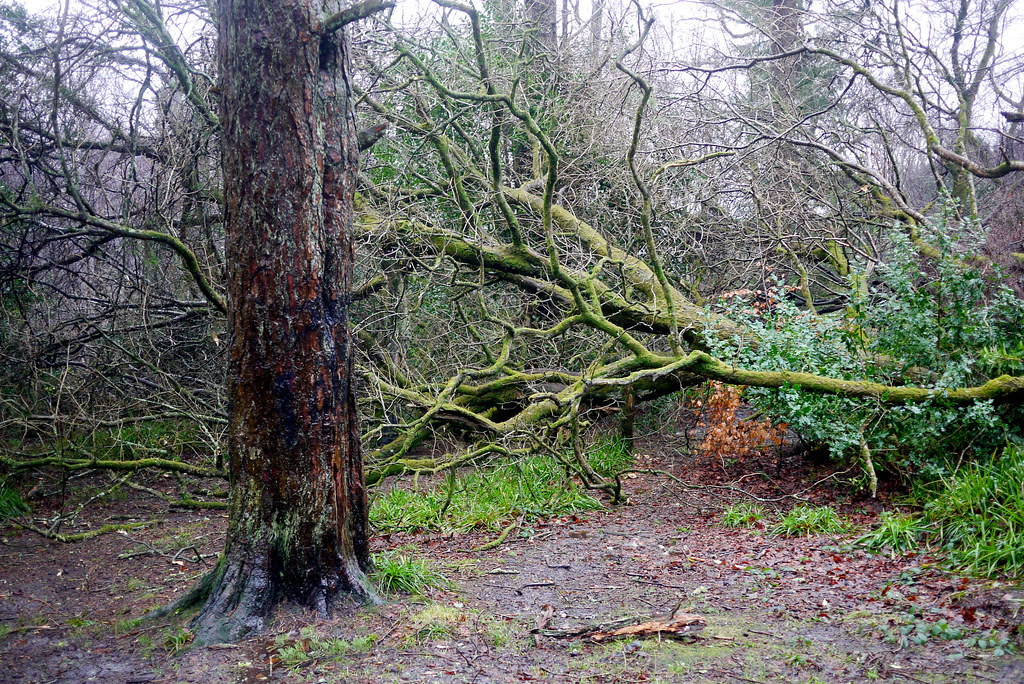 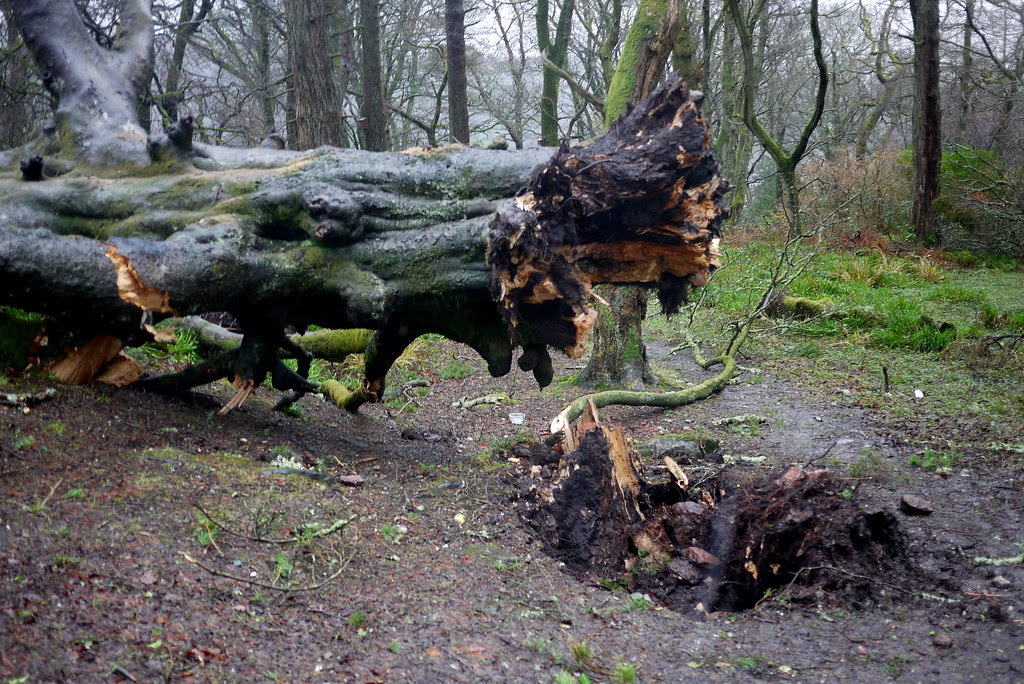 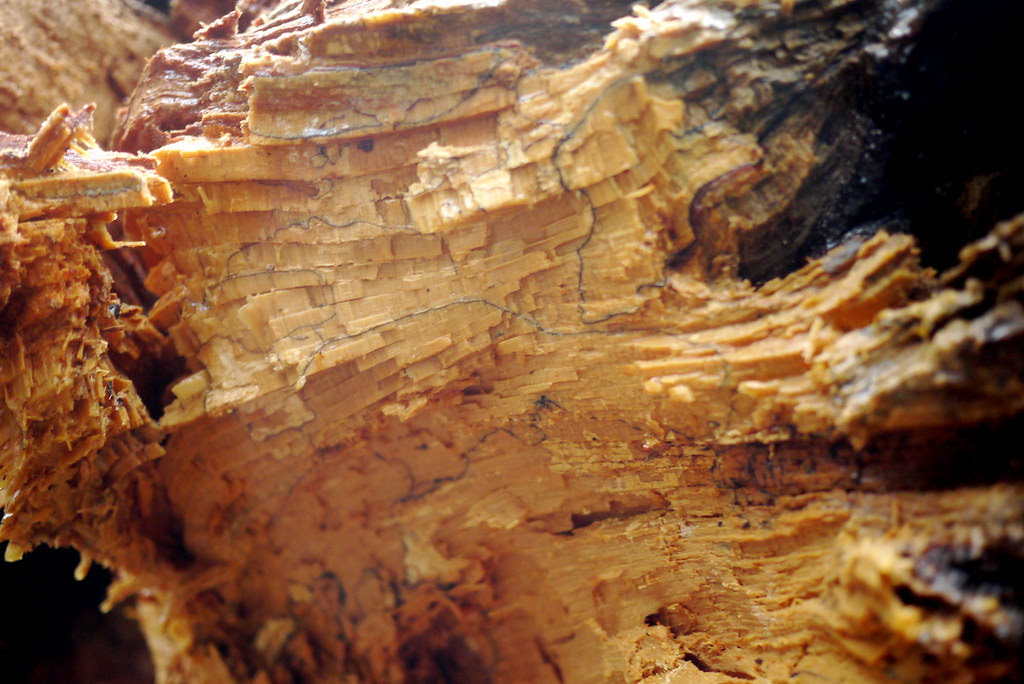 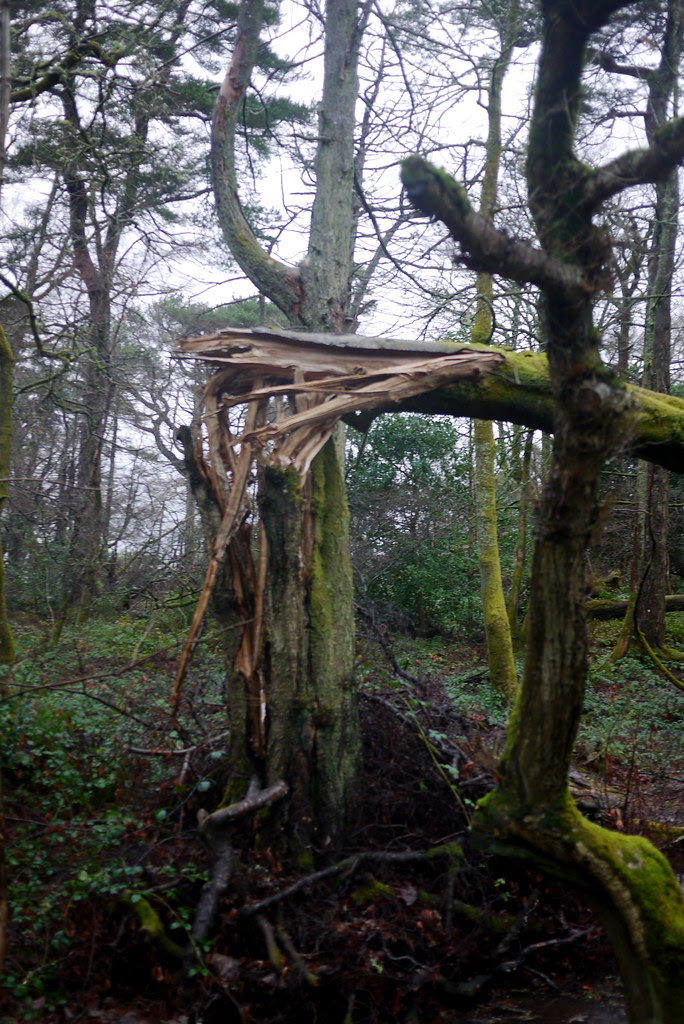 Those grand old trees are covered in moss and lichen and fungus, the moss almost like beards: 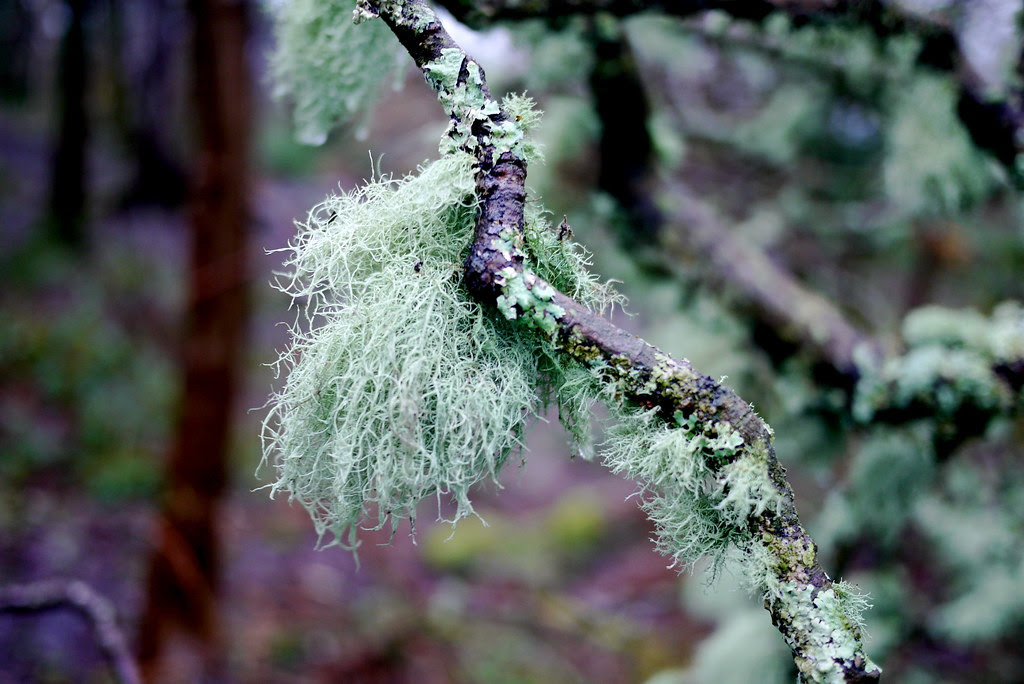 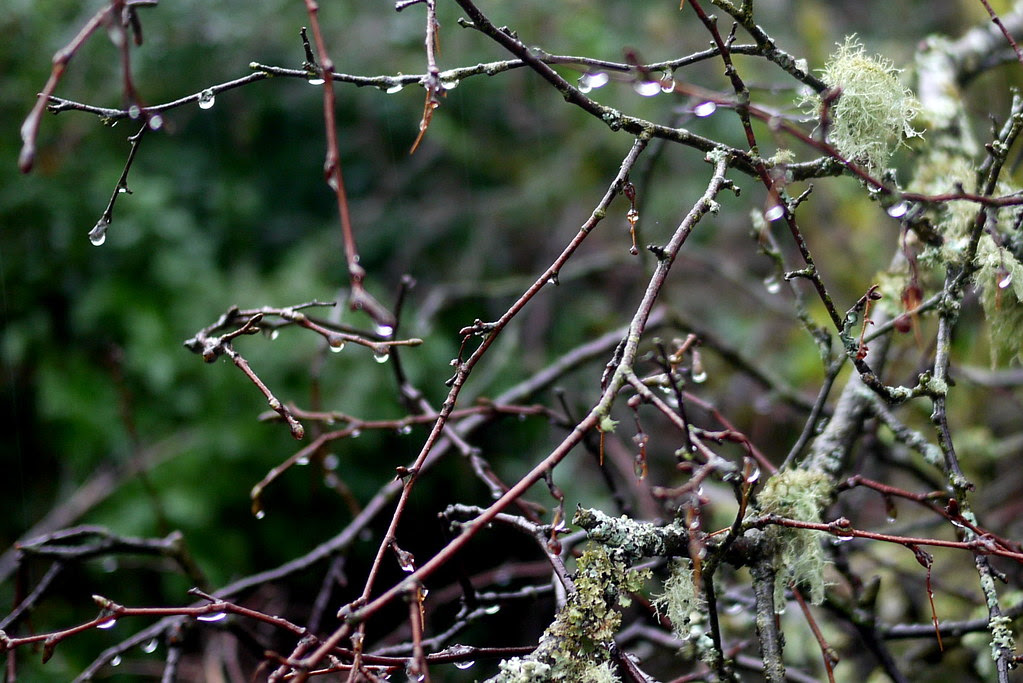 It's one of the things I love about this place - the soft moss, the greenery. We only got so far before the path was totally blocked off by trees: 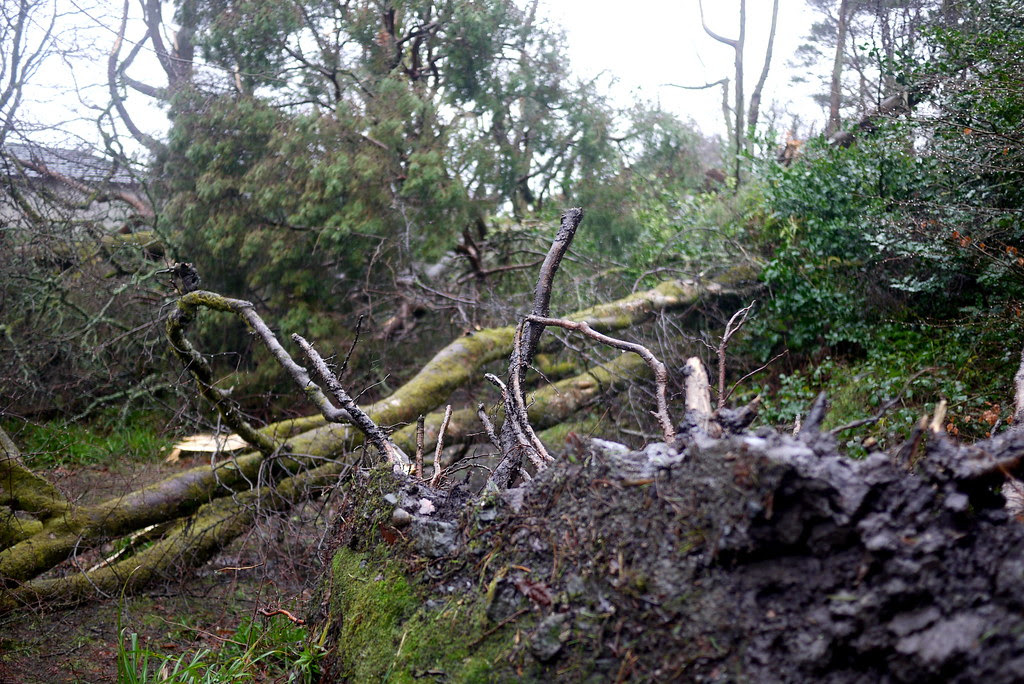 So we headed down to the path that runs besides the woods and made our way to the viewpoint where we could get a could view of the ferry. Along the way, we found this: 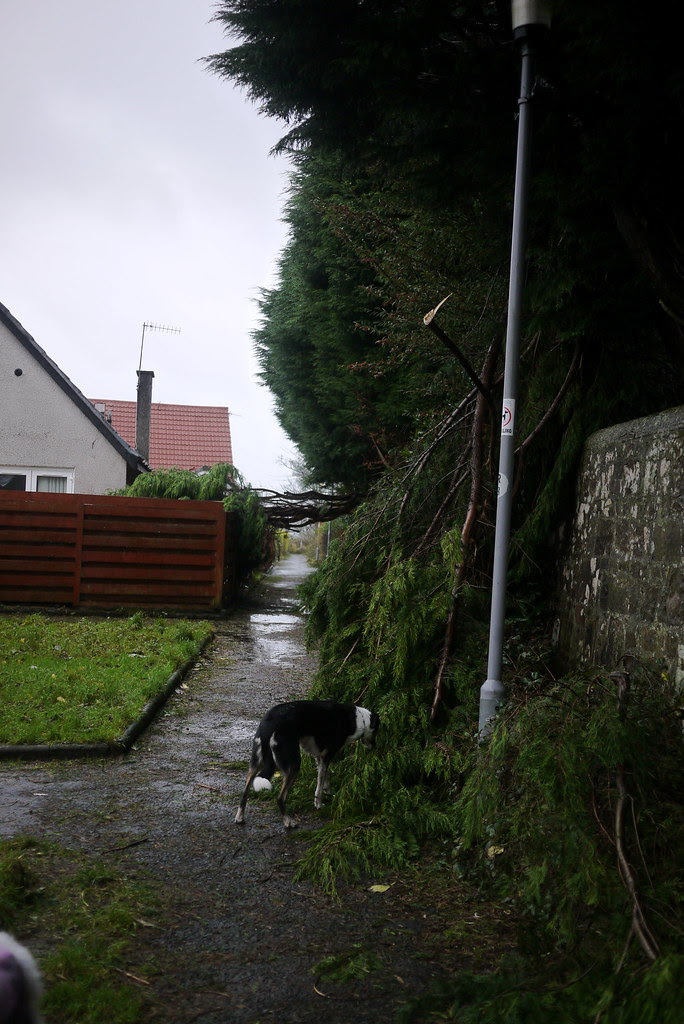 A foot to the right, and that tree would've landed on the roof.

We turned back with two soggy dogs and headed back home. Aside from fences, the damage only went as far as broken guttering and misaligned satellite dishes for the most part - houses and people got off lightly. This wasn't the case for the neighbouring towns and villages, some of which you can see in this slideshow - the pictures of Largs and Greenock. There were tiles missing from the roofs of the small row of village shops we have, and there was tile debris all around the place. The hairdresser's shop had water flooding in through the ceiling and the staff were battling flooding as we went by, and council contractors were sorting out felled trees around the school and playing fields.

Looking at the damage - those magnificent old trees, snapped and broken and uprooted in particular - it's sad, but it's nature I suppose. Other trees will sprout up in their place eventually. Thankfully, however, at least we've had some sunshine today. Finally!
Posted by Seren at 21:49 No comments: