An outsider looking in

One of the recent posts over at the Wild Hunt blog got me thinking (dangerous, I know). It wasn't so much the posts that got me thinking - though I was glad to see it being covered - but the comments, really, many of which (at first) I found to be disappointing or just sad and apathetic.

Jason made a post on the recent protests and actions against the threat to the San Francisco Peaks; in short, there are plans to expand a ski resort in the San Francisco Peaks in Arizona, despite the fact that the mountains are considered to be sacred by the indigenous groups there. The resort want to use wastewater to make snow - something that the protesters are objecting to strongly.

This isn't the only point that's being protested against, but for some reason people seem to be getting hung up on it, rather than looking at the bigger picture. In order to get the snow up there, pipelines will have to be laid, which will involve bulldozing ceremonial sites and digging up part of the mountain in order to lay the pipe. The comments in response to Jason's article were almost overwhelmingly - at first, anyway: "So? We use wastewater for drinking as well, it's only a bit of snow."

I find this kind of response is disappointing on many levels. Judgements were being made with little attention to the actual facts, and instead only one aspect is being focused on that is being dismissed as irrelevant. Even if the type of water being used for the snow was the only issue at stake here, however, the fact remains that the proposals go against the religious beliefs of a people and a minority. Their religious beliefs are being ridden roughshod over for the sake of profit; once again, a sacred site is under threat because money is to be made from it, and those who are protesting against it are being dismissed as a vocal minority with no real point or purpose. Is it just me, or is there a big disconnect here?

One of the things that a lot of Gaelic Polytheists - reconstructionists - have to reconcile is the fact that while we honour the dé ocus an-dé, the "gods and ungods" within a specific cultural focus, most of us aren't living in the lands where those gods originated from. And yet a large part of our practice focuses on building a relationship with the land we live in, as well as the spirits who live there.

Tied in with that, one of the inevitable questions for some folk is how to respect local beliefs (and spirits) that aren't Gaelic (I'd say "Irish, Scottish, or Manx", but that's a bit of a mouthful), and carry out our practices without causing offence. In the US there are some practices that are taboo in indigenous practice that are common in a Gaelic context; in Ireland, for example, it's common to pour a drop of whatever your tipple is - a wee offering for the Good Folk - if you happen to enjoy a drink outside. For some indigenous people, alcohol is a taboo and considered a poison for the ground. As much as it's a simple matter of respect and common sense not to piss off local spirits by offering what they might consider poison, it could also be considered a matter of hospitality. Hospitality is considered to be a virtue in Gaelic Polytheism, and that should include taking into account the needs and wants of our honoured guests.

Sacred places are increasingly coming under threat at the expense of progress. Whether it's the hydro-electric proposals that are threatening the safety and integrity of Tigh nam Bodach and Gleann Cailliche, or the motorway that ploughed its way through the Tara-Skryne valley, or the Slane Bypass that protester's claimed threatened Newgrange's status as a World Heritage site (which has been given a reprieve - for now - thanks to the ongoing economic downturn)...or whether it's something like the San Francisco Peaks that's at stake. It's a slow and seemingly inevitable march.

Pitted against progress and profit, there is the question of conservation and cultural integrity. These two sides often seem at odds, and I think ultimately if we want our own beliefs and sacred places to be respected and protected, then it's an issue that goes both ways. It's a case of being stronger together, and supporting others in their struggles to preserve their own sites even if it's not on our own turf, or relating to our own religion.

As a reconstructionist, I honour the gods from a specific culture. Part of my focus is looking to the lore, the history, the archaeology of that culture. I see that culture preserved within the landscape around me here, in the language on the signposts by the side of the road and in shops (always underneath the English, in smaller lettering as if a lesser language, however). Around me lie the memories, experiences and expressions of those beliefs and practices that I aim to incorporate into my life - such as that might be. This land I see around me is sacred, and I'm not the only one to share that view: 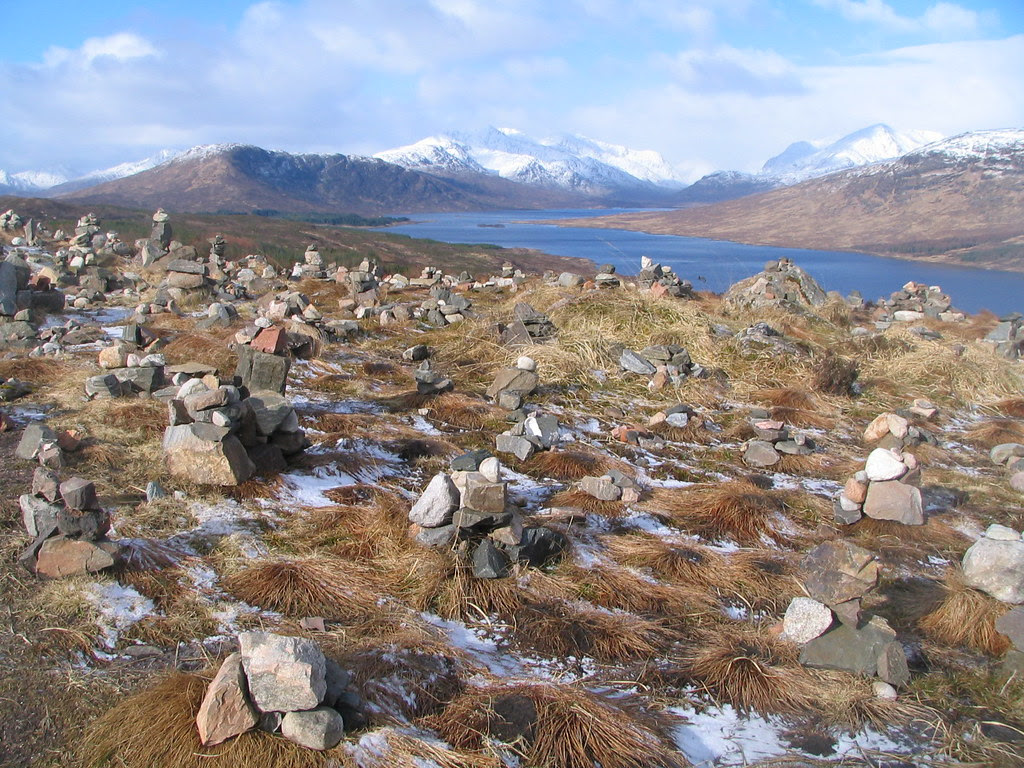 Cairns at Loch Loyne, 2008
Even today, people leave a mark, a sign of remembrance and perhaps thanks at having been present in such a landscape (and this isn't the only place I've seen).

Given my views it's only natural that I might err on the side of conservation, and I can understand why others do too. Why some people - pagans, reconstructionists, polytheists who also might see the land as sacred - don't care about these things, I don't understand. What's happening at the San Francisco Peaks, and probably many other places around the world, they're not happening in my back yard. There's probably not a lot I can do about it, being all the way across the Pond. But as a polytheist and an animist it saddens me that these places are being lost, and in the process freedoms are also being lost. Apathy reigns and big business wins, all because it's just a bit of snow.

But it's not. It's not just snow. It's not just a few pylons, or just a road. It's all wrapped up in belief and tradition, sacredness and ceremony, integrity and culture. None of that should be lost for a ski slope, or a road, or a hydro-electric scheme. At the least, none of it should be lost without a fight for it first.
Posted by Seren at 09:47 13 comments: