For one reason or another I keep finding reasons to not quite get around to celebrate Là Fhèill Bhrìghde just yet. All my energy seems to be going into getting the house sorted and decorated, and various other projects that I have on the go, including some actual work that I've been doing (I'm proofreading a book, and may end up editing it, too), and in part I've been holding off because I've been wanting to get the house feeling like a home - I'd like to offer the hospitality of my home when I do my celebrations, plus the fact I've wanted to get most of my distractions out of the way so I can concentrate fully and relax a little. I also have a plan to plant a rowan, so I've been waiting for the weather to improve...I'm still waiting...

However, I haven't been completely idle.

Seeing as I have quite a lot planned I decided to make the dealbh Bride (an icon of Bríd, made to represent her so that she can be invited in on the eve of celebrations, to bless the household) in advance - partly because of timing constraints (especially with the kids), and partly because I'm not the craftiest person, so if I mess the first attempt up, I can have another go...

I'm fairly happy with my first attempt, so I'm sticking with it (it took me bloody long enough, at any rate). Last year I made it out of raffia, which was the closest I could get to a sheaf of wheat or oats (what they were usually made of) - it was a natural substance at least - and I kept it fairly plain and simple as my first ever effort. This year I couldn't even find any raffia in a price range I could afford, let alone corn, so I had to opt for pipe cleaners. Hardly authentic, but thoroughly modern and in some ways more appropriate to my own circumstances. Tom was impressed, anyway, and he had fun with the leftovers. I was planning on burning the dealbh Bride from last year, but instead it seems more appropriate (and practical, given the wet weather) to bury it at the roots of the rowan I want to plant.

The pipecleaners were easier to work with than the raffia, so I got a bit more ambitious in terms of decoration. Unfortunately, all I could get at the time were glittery ones, which has resulted in my efforts looking more like an angel for the top of the Christmas tree, but ho hum. I'm just pleased that I've ended up with something that's vaguely doll-like. I've since found more local places to get plain ones from if I need to next year, so while I may not end up with an abundance of corn in the coming year, pipe cleaners shouldn't be a problem...

But without further ado, here's my somewhat humble effort: 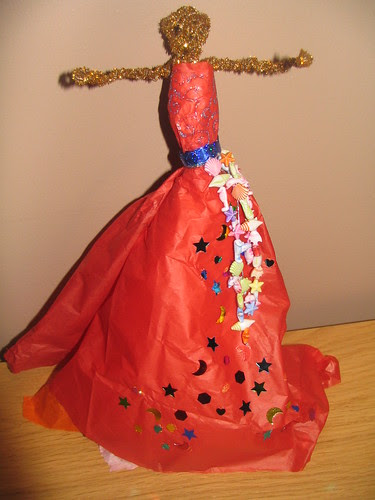 I just bunched the pipe cleaners together, using some to wrap around each other into a ball for the head, and one tied lengthways to make the arms, which I then twisted round to give a little bulk and substance to them. If I'd used corn, then I could have done the same, using the ears of the corn for the head instead of having to make a ball, I think.

For decoration, I took inspiration from Martin Martin's description of an icon he saw made on Colonsay: "The mistress and servants of each family take a sheaf of oats and dress it up in women’s apparel..." (Which can be found here, but no page numbers are given, sorry). I also added a good measure of Alexander Carmichael's description, using shell-shaped beads to dangle off her belt (most of them ended up round the back, so you can't see them in the picture). The shells seemed to be particularly appropriate for our new location, and I've thought about collecting a little seaweed to use for bedding when I make a bed for her. I think I'll probably also pick some dandelions to hang from her belt as well, now that they've come out.

I used red tissue paper for her dress, with a blue belt - both protective colours, which seemed appropriate. Her underskirts are white and orange, to add a little fieryness (and body). I glued the stars and moons on in spirals, which haven't come out too well, so I used glitter glue from Tom's art supplies to carry the spirals above her belt as well.

Hopefully I'll be celebrating sometime next week, so we'll so how well my efforts are received...
Posted by Seren at 00:44 No comments: Links to this post

I'm sure you've all been waiting in trepidation for my next post...

Anyway, all is well in the world of Seren.

It's been a very creative week all round. I've been decorating the hallway (boring off-white, verging on the dreaded beige, but it's about as much as the narrow space can handle, and the kiddie-proof range of paints is fairly limited anyway...), finishing off the bedroom, putting up the curtains and rearranging the camel cart bookshelf in the kitchen to fit in all the bits of clutter that were left over in all the boxes from the garage. I've made one of the shelves into a mini-microcosm, with plants, bits from the sea and a few more bits and pieces that are personal to me for one reason or another: 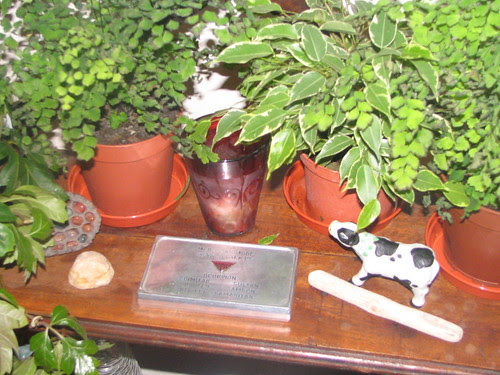 The plants might have to be relocated because the ferns are beginning to suffer already, I think they need a bit more light so I'll try to find something more suitable for the space because I like the foliagedness of it all even if it's in a fairly dark spot.

The metal plaque at the front belonged to my granddad - the only thing I have that was directly from him. It's from when he worked for Alvis, and designed a tank called a Scorpion (which apparently my aunt named, because the gun bit could flip over), and the plaque lists all the tanks in the series. My mum gave everything else back to Alvis when he died, for their museum, and the only other keepsakes she kept were my gran's, so that's all I have. To the left is a fossilised sea urchin, and the cow on the right was given to me by a wonderful friend.

The 'wand' is some driftwood I picked up on our last trip to the beach, which I was going to use as the slatag Bride for my Là Fhèill Bhrìghde celebrations, but I've found the applewood wand that I was sent (along with the aforementioned cow) and I shall use that instead. Seeing as this bit of wood came ashore during the storms, perhaps it's more appropriate for the Cailleach, anyway.
The red votive in the middle was bought by a childhood friend many years ago (so I hope you're impressed it's still in one piece!), and the pomegranate filled with tumbled stones to the far left was from a very nice man called Nick who used to run a gem shop in my hometown. You'd go in and he'd always know exactly what you needed, even if you didn't, but sadly he got sick and had to close up. I don't know what happened to him after that...But it reminds me of my independence in a way, because I bought it after my parents split up and I was taken in by an old friend. It's come a long way with me.

So there are lots of bits and pieces that all mean something to me and represent something to me in some way or another - gods, spirits or ancestors. I'd like to get some more bits and pieces for it, especially something suitable for putting offerings and libations on, because that's why I really made the space in the first place. I usually make them outside, and I'm hoping to get a bird table soon to make those offerings a bit more discreet from prying eyes, but experience is showing that you either have to be very brave or utterly insane to venture outside sometimes (as the storms of the passed week have demonstrated), so it seems practical to have somewhere to keep them until they can go out. I used to have a quaich, but we lent it to an am-dram society for a production of Macbeth before we moved up here, and haven't seen it since.
Things are taking shape now and it's starting to feel like home, which is making me feel a whole lot better, much more settled. The only downside is, I'm rapidly running out of excuses to not invite the in-laws round for dinner...
Posted by Seren at 00:37 No comments: Links to this post