Life, the universe, and spaceships

It's the Easter holidays at the moment, so there's entertaining of small children to be had (and so not much room for deep thoughts). A change of pace and posting is in order, then - domestic life reigns. Aside from roping them in to help me with catching up on the housework and gardening, we've been having a few days out here and there. We were going to try an overnight camping trip over in Argyll sometime this week, but it looks like the weather's turned against us. There's a chance we might go away for Bealltainn with some friends, though, so I'm looking forward to that.

Anyway, in lieu of any camping trips, our latest mini-adventure was to go into Glasgow so I could sort out things with the library - I went on Saturday to try and sort the book I lost out, but they said they couldn't make a decision then and I'd have to come back on Monday. I'd bought another copy of the book (the original of which I think I accidentally put into the recycling bin when I was sorting a pile of paper out) in the hopes that it would get back on the shelves a little quicker, so it needed a manager to decide whether that was "the best way to move forward." So I dragged the kids into the city on Monday, with strict instructions to Behave when in the library. They did, and the manager accepted the book with the addition of a small admin fee (which I was expecting), so it's all good. My conscience is salved.

My library trip on Saturday yielded another haul of books - probably too many to read all the way through, but I'll try. I've nearly finished the first one, and at the least I want to work my way through Peter Narváez's The Good People, and Diane Purkiss' Troublesome Things (can you sense a theme?). I'm not sure I'm going to like the latter. I also picked up Katharine Brigg's' The Fairies in Tradition and Literature, mainly because it was on the same shelf as the others.

While we were in the area, I took the kids over to the Botanic Gardens - I'd promised the kids a treat, and there was supposed to be a Children's Garden there, but when we got there nobody was about and it looked a bit underwhelming anyway. Instead, we headed to Kibble Palace: 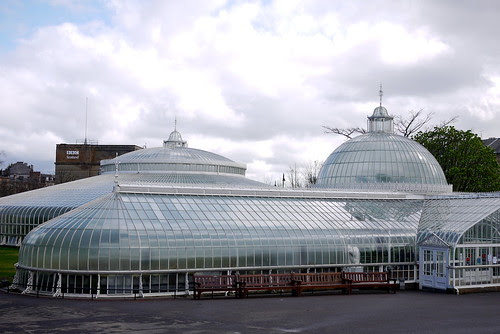 It's a Victorian glasshouse (or spaceship, if you're Tom and Rosie). I used to walk passed here everyday on my way to university when I was a student (and it gets a mention or two in one of my favourite series of books, by Ken MacLeod, too), so it's a nostalgic piece of the past, for me. Fun fact: the building you can just see behind the glasshouse used to be the BBC headquarters in Scotland, and they used to film news pieces outside on the pavement a lot. I walked passed a reporter doing an interview once, and tripped over my shoelaces right on camera.

Inside the glasshouse there are lots of tasteful sculptures dotted about the place (tastefully naked, of course): 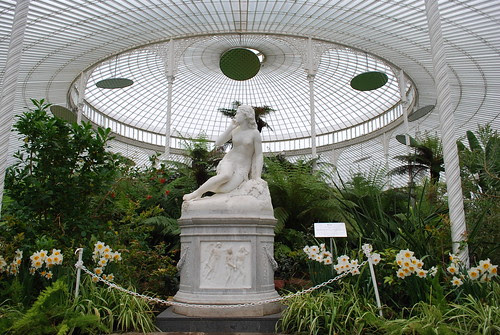 (This picture's from a few years ago, the statue is of Eve). And there are lots of different plants from around the world - various parts of Africa, America and Australia. The kids' favourite, aside from running around in amongst the paths that form an almost maze to the centre of all the plants in the main section, is the fish pond: 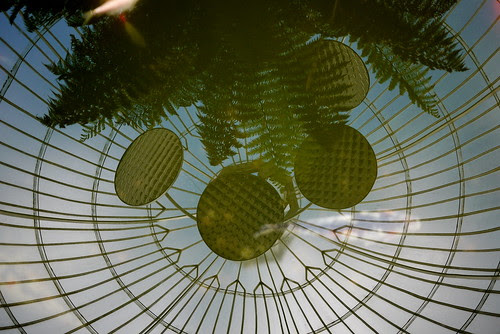 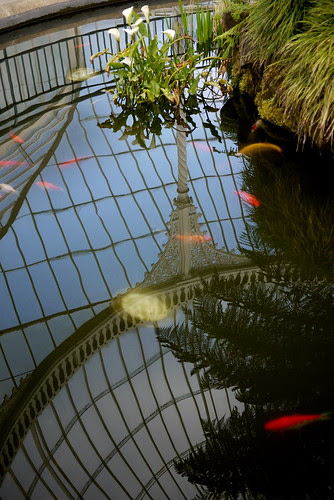 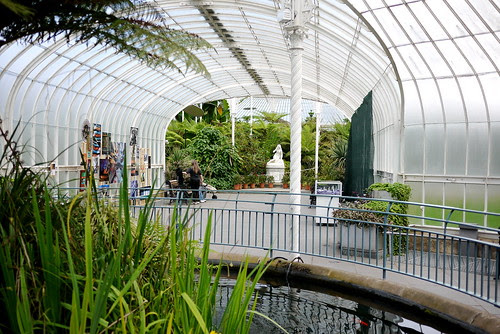 The best part about the place is it's peaceful (moreso when it's not the school holidays, to be fair). And always warm. I used to come here as a student for a little bit of peace and quiet, taking some time to destress from whatever essay or exams I was in the middle of. I could do with a bit of that just now, so a visit was much in order, even if I did have to concentrate on herding small children. Places like this are kind of Otherworldly, to me; completely different from the outside world, a bubble of peace and calm in a sea of chaotic life. It's good to get away sometimes, and when I lived in the city on the top floor of a tenement it was places like this that gave me a taste of earthiness and escapism that I craved.

I promised Rosie a banana tree, so we went over to the hothouse as well, where it happened that they were watering the rainforest section - which meant turning on the sprinkler system to simulate rain. Best fun ever, apparently: 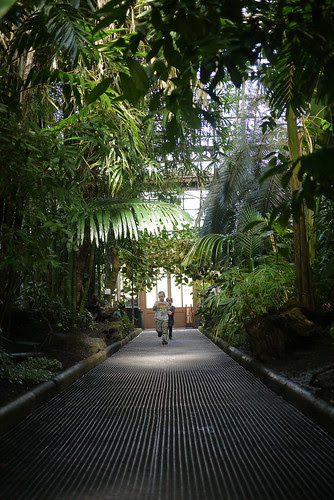 Today, though, with the rain and cold back once again, we'll be off to the garden centre to pick up a few things. I've finally managed to get started with this year's vegetable patch, although so far nothing has come up yet. I put in some onions and leeks during the wane of the moon (so they won't run to seed), and some carrots and sprouts once the moon started waxing (to ensure a good crop). This year I'm trying some purple carrots as well as normal ones, but otherwise I'm not planning on much else. The broccoli and cauliflower I tried last year were a dismal failure (any broccoli or cauliflower I got were tiny buds), and my neighbour said he'd read that they need very compact soil to yield decent-sized veg - so containers probably aren't the best for them. I'll maybe try a few salad items, once I've bought more seeds, but that's about it.
Posted by Seren at 10:18 No comments: