Since my last post I've been wallowing in the delights of a triple-whammy of never-ending Viral Lurgy Of Dooooom (ohhhh the delights of having school-age children), so while Là Fhèill Brìghde has been celebrated right on time here, I'm only just about mustering the presence of mind to write anything up about it. I hope you're all considerably less germy than things are 'round here.

Seeing as the kids were thoroughly under the weather over the course of our celebrations, they weren't too keen on getting too involved in much of anything so it was mostly just me left to my own devices this time around. I generall aim to try and encourage their interest rather than insist on their involvement, and for the most part Rosie is far keener than Tom is (if Gaelic Polytheism involved robots he'd be sold, but as it is...not so much...). So I ended up making a dealbh Brìde by myself one evening. I'm running low on supplies and didn't want to have to use any glue so it's a little bespoke, but it does the job: 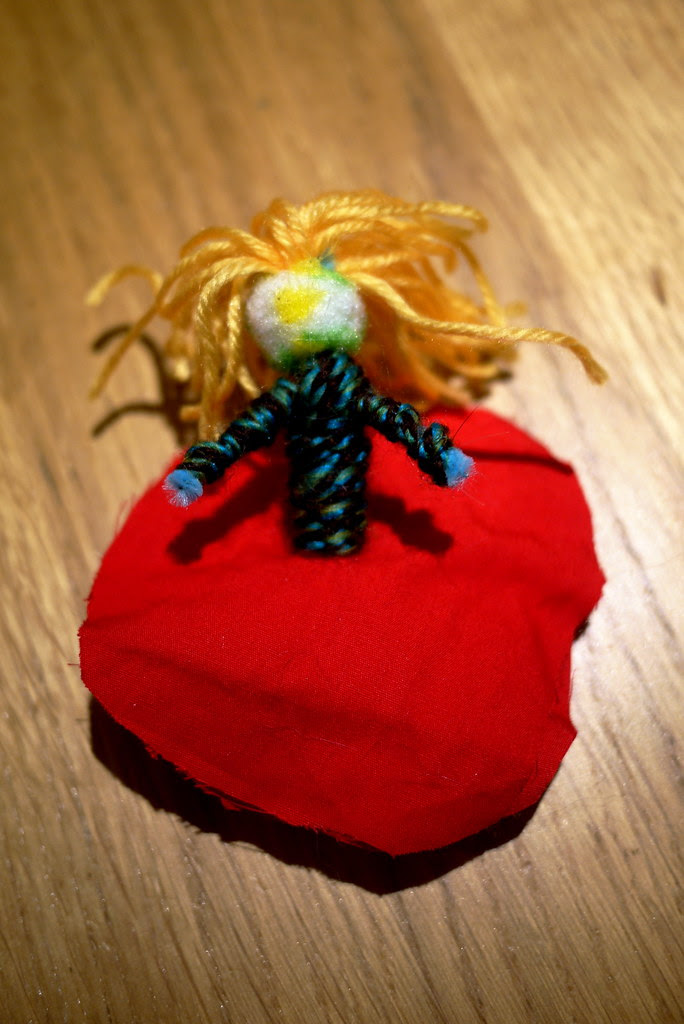 Last year we used an icon that Rosie had made and she insisted on making underwear for Brìde (or "the lady who comes with the cow," as Rosie refers to her). I must confess that this year I didn't. Scandalous.

So anyway. The day before our celebrations had been spent cleaning and tidying, while on the Thursday itself I went into Glasgow to join my mother-in-law at a seminar that was part of the Celtic Connections festival. It was a talk on the state of archaeology in the Orkneys and I thoroughly enjoyed it - part of it was a wee slideshow accompanied by some traditional music, so I got to see lots of sites from around Orkney. Sadly, the point of the seminar was that most of them are under threat from coastal erosion so there were a fair few before/after shots (now you see the Pictish house! Now you don't...). My mother-in-law will be going on holiday to Orkney this summer and I'm thoroughly envious.

I got back home in time to start the dinner and decided to make a Shetland brönie for pudding (dessert); it's a kind of gingerbreadish bannockish...thing...made with buttermilk, so it seemed apt. It was very nice, but would've been nicer with a bit of rhubarb and ginger jam, I think. I set some aside for Brìde, anyway.

Tom was feeling rotten and was good for not much more than lying on the sofa groaning occasionally before sloping off to bed, poor thing, but Rosie was well enough to want to know what was going on and why she couldn't play with the new icon I'd made. She remembered from last year that Brìde would be coming to visit and wanted to take it to bed with her, so I decided to relent a little and got one of the old icons I made a few years ago out - a soft one made from a sew-it-yourself kit - and gave it to Rosie so she could take it to bed. At bedtime I told her to look after it and make a nice wee space for it in her bed, and maybe if she told Brìde she was welcome to come and visit, she might. I told her the words to say and Rosie repeated them back as she fussed about the icon to make her nice and comfy. I invited Tom to join in and he mumbled along from the top bunk of the bed with as much enthusiasm as he could muster.

Along with the old icon I'd dug out for Rosie I'd found some red raffia that wasn't doing much so I decided to make a cros Bríde with it, wrapped around some twigs of rowan. I placed it on my shrine and the next day when Rosie saw it she wanted to make one so I dug out some lollipop sticks and wool so we could make one together (just like I used to make as a kid - except I think we made them around Lent, for some reason, and nobody ever told us what they were for). She found it a bit tricky to do  it all by herself so we did it together, and ended up with this: 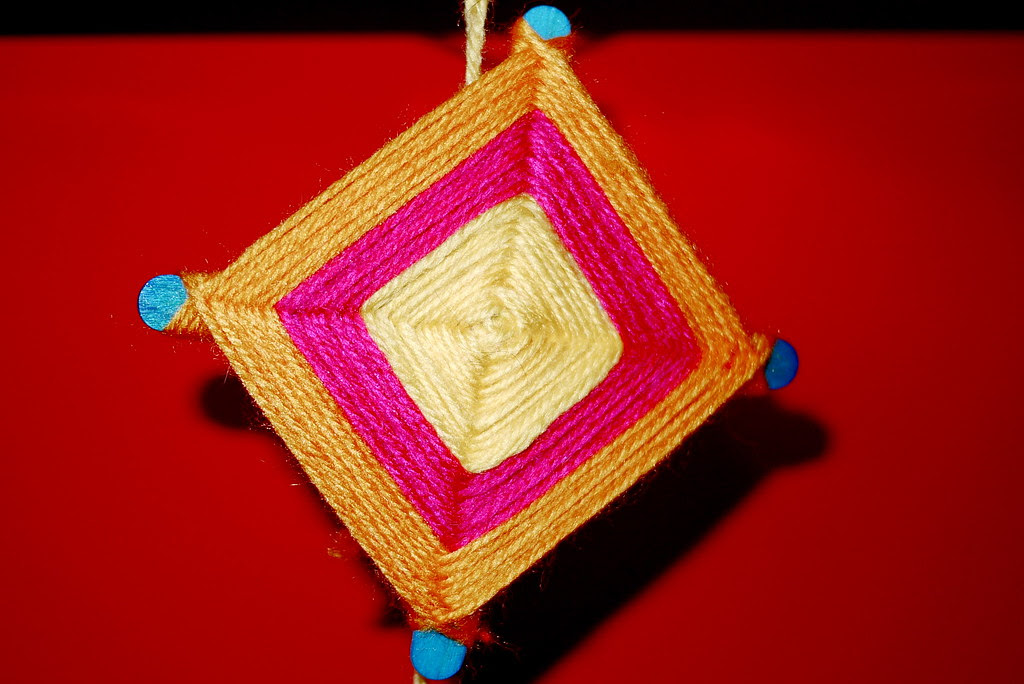 Which is now hanging over her bed. As we made the cros I asked her if Brìde had visited her in the night and she said yes she had. Rosie told me that Brìde had sat with her for a while and had told her not to worry about her school work - even though it's hard sometimes, it's how we learn, and even if we get things wrong, then it helps us figure out how to do things right.

But back to my evening...

The night was extremely windy and the rain was being thrown down in clumps and spurts. After putting the kids to bed I got to doing my own thing, put the icon in her bed with her wand and opened the door to invite Brìde in. I spoke softly into the storm and stood for a little while on the threshold before closing the door. I sang, made offerings, sained the house (not necessarily all in that order...), and left out some food for Brìde for the night; I meant to put some clothes out for blessing but somehow forgot (I was going to put something out for my niece, too, who's pregnant, so I kicked myself for that).

It was a quiet ritual (admittedly punctuated by the back door being dramatically pulled open by the cat just after I'd invited Brìde in, who then announced himself loudly, and then blown open again by the wind), and one I've done so many times now that it felt comfortable and comforting. Some people like to do something different for every festival - and yeah, sometimes change is good. But after nearly ten years of finding my way I'm starting to feel like I'm really treading in some familiar footsteps for each festival, each day.
Posted by Seren at 12:35 7 comments: