Back in January 2015, if you recall, news broke that a statue of Manannán mac Lir, which had been erected at Gortmore Viewing Point on Binevenagh Mountain, near Limavady, just one year previously, had been stolen. After removing the statue (apparently using an angle grinder), the thieves left a large wooden cross in its place, which read 'You shall have no other gods before me.'

The theft, which appears to have been religiously motivated, received a huge amount of attention, both locally and internationally, and even prompted a (rather tongue in cheek) missing person's appeal by police to help raise awareness. Although the people responsible for the theft and vandalism of the site have never been caught, the statue was eventually found by a group of ramblers – exactly one month after its disappearance – just 300m from its original position. Aside from having been cut from its platform right at the feet, the thieves had tried to remove the head. It was decided the statue was beyond repair, and after some debate (with some vocal opposition railing against restoring the 'paganistic monument'), local councillors agreed to commission a replacement from the original sculptor, Darren Sutton. Just over a year after the original statue's theft, the new statue (which was made with additional reinforcements to make any future attempts at a repeat more difficult) was put in its rightful place.

Back in 2014, Mr Seren and I took the kids on holiday to Ireland, basing ourselves in Dublin and taking in the Newgrange complex, Kildare, and Tara, amongst other things. In July this year, we decided to take a trip back over the water, and this time we based ourselves in Portrush, right in the far north near the Giant's Causeway and not too far a trek from Binevenagh Mountain itself. It's an amazingly beautiful area and we somehow managed to pick one of the hottest – and sunniest – weeks of the year to do it all, which was incredibly lucky. Being so close, the chance of visiting the statue was too much to resist, so one evening (on our 16th wedding anniversary) we took a drive up, an hour or two before sunset. 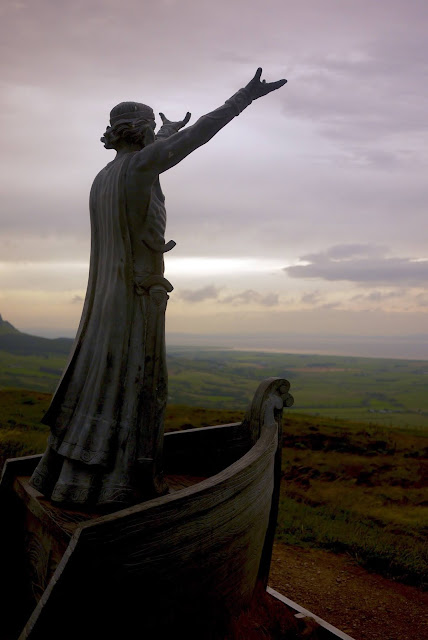 Close up it somehow seemed smaller than what I was expecting, just from having seen photos of it. The details and craftsmanship of the statue itself is absolutely breathtaking, though, from every angle. 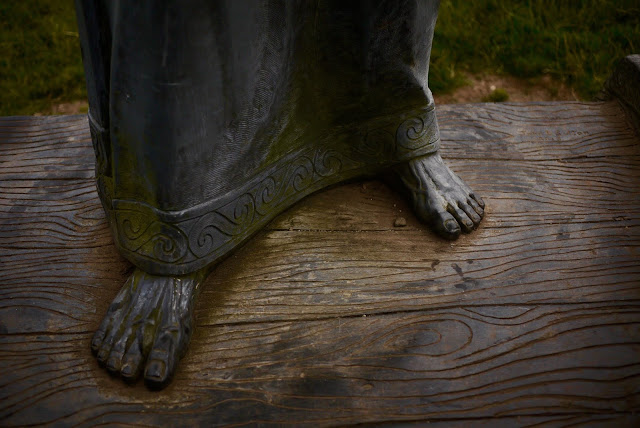 Unfortunately, as you can see in the picture below, there's some minor damage to the statue, including what appears to be a gouge mark on the right leg. 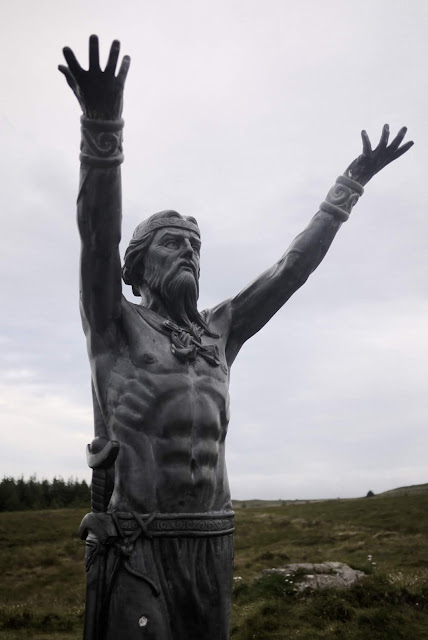 I couldn't say if this is the result of deliberate, malicious attempts to damage it (again), or if it's accidental, though.

The statue was erected at the site because of Manannán's reputed connections to the local area; storms and rough seas are said to be the result of his fury. From the viewing point where the statue stands, you can see Lough Foyle as it meets the Atlantic Ocean. 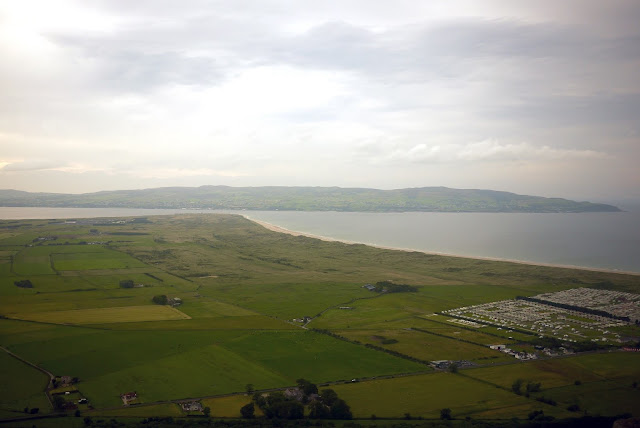 Looking out to sea it's absolutely stunning, and turning further inland isn't bad, either. 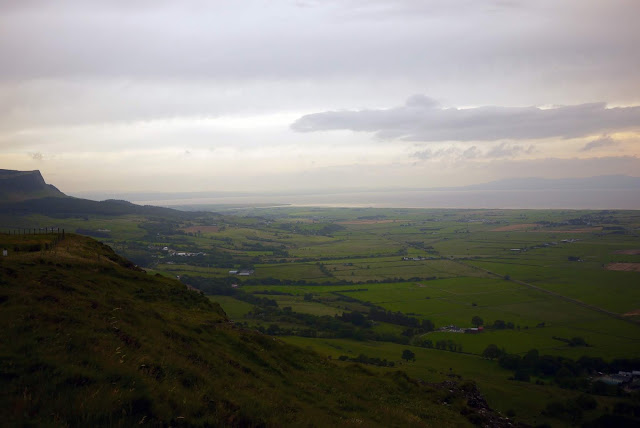 The statue of Manannán himself stands on a ship, or part of it, at least. At the back of the ship, the sculptor has detailed some of the most iconic items that were found with the Broighter Hoard, which was discovered in a field near Limavady in the late nineteenth century: 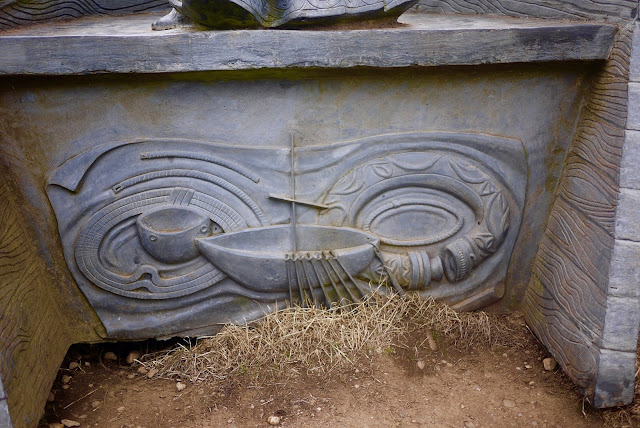 You can see here the torcs and chains, collar, bowl (possibly representing a cauldron), and the miniature boat (replete with tiny oars, benches, and mast), which were all made out of gold.

When they were originally discovered, the items were squashed and badly damaged by the plough that had brought them up to the surface, and the finders – two men working the field, James Morrow and Thomas Nicholl – sold the hoard to the landowner (and their employer), Joseph Gibson, for just £5. At the time, items like this were often sold for scrap; their great age and significance wasn't really understood or appreciated so it wasn't unusual for old gold like this to end up being melted down and turned into something shiny and new, the original form of the items lost for good. Who knows what's been lost because of this, but luckily in this instance the hoard was saved from this sort of fate. It was sold to a private collector, Robert Day, who then had the items restored by an experienced goldsmith. It was only at this point that the form and intricacy of the boat was uncovered (for one), and Day then sold the whole lot to the British Museum for £600.

The Royal Irish Academy, who had become increasingly invested in rescuing items of this nature by this point in time, had tried to secure the hoard for themselves, but it had already been sold before a full inquest had been carried out to establish whether or not it qualified as treasure trove. The RIA believed it did, and were less than pleased that the British Museum had snapped the gold up for themselves. The dispute eventually ended up in court where it was argued the British Museum had bought the hoard unlawfully, because as treasure trove the hoard would belong to the Crown, not Robert Day himself.

The key point in the case was in deciding whether or not the person (or people) who had left the hoard in the field ever intended to recover the items. If the judge ruled that there had been the intention to recover the hoard (say if they'd been buried temporarily, for safekeeping), then they would qualify as treasure trove and the hoard would belong to the Crown. The British Museum would have to give up the gold, and that would pretty much suck for them. If they managed to argue that the items were never intended to have been recovered by the original owner(s) (or a rightful heir), however, the hoard would not be treasure trove and the British Museum would be able to keep them and do with them as they wished.

The British Museum set out to argue that the hoard had been deposited as a votive offering to an Irish sea god, and they brought in an expert to confirm to the judge that there was indeed such a deity – a 'mythical Irish Neptune,' as the judge later referred to him in his ruling – in the form of Manannán, who (crucially) was well-known in local legend. The British Museum also brought in experts who testified that the field in which the items had been found would have been under sea at the time of their deposition, some time in the first century B.C.E., and they further suggested that in order to deposit the items in that particular spot, they would have had to have done so from a boat. As an offering, then, there was no way anyone ever intended to recover them at a later date and that meant the hoard couldn't be considered to be treasure trove.

Hedging their bets a little, the British Museum then also argued that if the court accepted their argument that the hoard was a votive offering, then it couldn't be viewed as having been abandoned because clearly it did have an owner now – Manannán himself! This would mean the hoard couldn't be viewed as treasure trove on two accounts.

The judge, however, had little time or patience for any of this. He dismissed the whole idea as 'fanciful,' and instead accepted the ‘commonplace but natural inference that these articles were… hidden for safety in a land disturbed by frequent raids.’ The hoard was subsequently ruled to be treasure trove and the British Museum were instructed to turn the hoard over to the National Museum of Ireland in Dublin. Except for the occasional tour or loan, the hoard is still on display there today.

Since the court case in 1903, however, the controversy over the true nature of the hoard has continued. Rumours emerged that the hoard was not an ancient deposit at all – votive or otherwise – but had, in fact, been discovered wrapped up in a very modern umbrella, possibly having been hastily stashed after a robbery. Claims were also made that the bulk of the hoard was not Irish in origin (except, perhaps, the ornate collar), but had been imported from India. At around the same time as these claims were gaining traction, another gold hoard at the museum that had ultimately been revealed to be a fake was melted down. As doubts grew about the Broighter hoard, it could have easily suffered the same fate.

In more recent decades, studies have concluded that the hoard really is genuine. The gold itself is not local, and some of the items may be Roman in origin, but none of it is Indian in origin. The craftsmanship of the torcs and the gold collar are clearly Irish, and were probably made in the same area they were ultimately deposited in, around the first century B.C.E. The bowl and boat are so unique there is nothing really to compare them to, but the boat in particular appears to represent a large currach. The rings on the bowl suggest it was meant to have been suspended, just like a cauldron, although its shape doesn't appear to reflect any local examples of that period. Analysis of the local landscape has shown that while the place in which the hoard was deposited wasn't permanently underwater, it would most certainly have been intermittently flooded, and otherwise marshy.

Based on comparisons with other depositions from similar sorts of sites around Ireland, it now seems clear that the Broighter Hoard really was a votive deposit. Whether they were actually intended for Manannán himself is not something we can ever really know, but I think it's rather striking that these repeated controversies (and attitudes of religious intolerance, or dismissiveness towards anything pagan) have worked in favour of raising Manannán's profile so effectively on more than one occasion. Had the statue never been stolen by bigots, I don't think so many people would have heard about the statue in the first place – I certainly didn't know about it until the news broke, for sure. Clearly, Manannán wants to be seen. 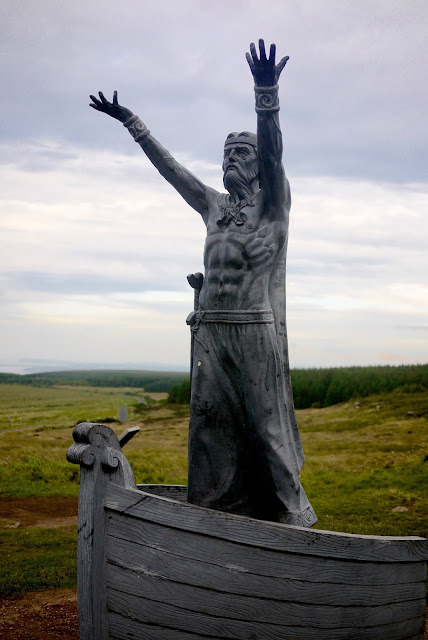