Monday morning dawned wet and dull - not an auspicious start to the day, and I wasn't too chuffed at being awake early enough to actually see it. After spending a good portion of the night trying to get Rosie back to sleep I was feeling crappy, irritable, tired and headachy. Nothing had seemed to make Rosie feel better and eventually, thankfully, Mr Seren had taken over the duties and ordered me back to bed to nurse my failing sanity. So as you might guess, I wasn't exactly awed by the wonder of nature, or overcome with a spiritual sense of...well, anything, really...as the sun rose behind the clouds and the dawn chorus got into full swing.

Still, I'd had it in mind that Monday might be the day for celebrating Lùnasdal, and making an effort to focus my thoughts, I slouched about the house, cleaning, tidying, sorting and playing with the kids, being all domesticated and trying to muster up some enthusiasm for any other than a cup of coffee and some freshly baked shortbread.

I ventured into the garden, briefly, to see if the blackberries were ripe yet, and they were, so that seemed like a good sign. I didn't pick any, seeing as there were so few, but decided to go blackberrying with the kids the following day in some of the larger hedgerows, intending to finish my celebrations off with a nice apple and blackberry pie (although that never happened, thanks to the fact that I got stranded in Largs after the bus never showed up. I ended up having to get dinner there while I waited for Mr Seren to pick us up, and Tom and Rosie were thoroughly disgruntled).

As Rosie napped the rain took a brief respite and the pressure began to build, with more and more clouds rolling in overhead. While she slept I tidied up in the bedroom and Tom helped me sort out the washing, and the atmosphere started to get very close and the dogs, who were playing in the garden, began to get a little on edge and frisky. Then came the thunder...

I love thunder and Tom was excited too, and as we came downstairs to watch it and make sure Mungo didn't freak out at the noise (Eddie's always been fine with it) I thought, well, I can't ask for a better sign than this, can I? That decided it.

For my first attempt at celebrating I made stovies and some cream crowdie for the feast. I wanted to incorporate something that I'd harvested myself into the food, but seeing as I decided against a vegetable patch this year I made do with some mint from the garden, as a garnish to compliment the raspberries (and the chocolate I'd added) to the cream crowdie (a traditional dessert at this time of year). This time neither Mr Seren nor I were particularly hungry so Mr Seren said he'd just pick at something, and I had some Scotch broth (because that's what was in the cupboard, not trying to be traditional or anything like that, but it seemed to fit well at least) while the kids ate their dinner.

With the kids in bed I started on my evening of devotions. I started off with a Good Wish and the sop seille, sprinkling some of the water I'd saved from Bealltainn around the house to cleanse and protect. Then I started on the bannock, and as planned I had a go at a Selkirk bannock this time. I've never been all that successful at bread making so I was a bit worried about how it would turn out - there's a knack to yeast that I don't seem to have discovered (yet, hopefully). I had to adapt the recipe a little, using all butter instead of half butter, half lard, and some mixed dried fruit instead of sultanas and a little mixed peel, but otherwise I stuck with it.

The Selkirk bannock is hard work but to make but very straightforward, and I blessed the dough, asking for prosperity and protection for the family as I mixed it together and then put it in the tin to bake in the oven (it should be round, but I used a loaf-tin because that's all I had that was suitable - pictured is what was left of it the next day), like I usually do with the more traditional oatmeal bannocks. All told it must have taken three hours to make (including allowing the dough to rise), and persuading the dried fruit to work into the dough was a trial. I'm not sure the dough rose as much as it should have, and next time I think I'll leave it a bit longer and maybe try the oven a bit warmer - the end result was very heavy and brick-like - but overall I was pleased with the result and the extra effort meant I felt more focused on what I was doing.

I forgot to adjust the oven temperature for a fan oven so it cooked a little too quickly and was very well done on the outside by the time I took it out for the glaze, so I had to cut the cooking time short and it wasn't quite as cooked inside as it could have been - a little stodgy still. Mr Seren for one likes things well cooked and commented that it's very much like a black bun. Next time I try it, I'll make sure I use the right amount of sultanas and peel, because its citrusy flavour of the ready mixed stuff I used was a bit much. Less is more for my tastebuds.

As I was waiting for the dough to rise I got to work on the rowanberry necklace I'd been planning to do. I got the idea from The Silver Bough, where I read that women (who couldn't afford amber or red coral, for the same purpose) used to make them and wear them for protection. I'd picked the berries a while ago, from the trees behind the house (asking before I did so and leaving an offering of thanks after it seemed OK to take them), and tried drying them on a low heat in the oven for a few hours. Most of them were still a little sticky, but dry enough not to make too much of a mess as I strung them on some blue thread (I was out of red, but I'm fairly sure blue was sometimes used for protective purposes too). I charmed the necklace as I made it, like I did with the rowan and red thread crosses I made at Bealltainn and put it around the votive candle on my little sacred space after I'd finished, while I went back to the bannock.

With the bannock done, tasted and shared with Mr Seren, I took a slice into the garden with some whisky as an offering to the spirits. There's an evergreen growing at the back of the garden, not too tall, but the way the light from the kitchen was falling onto it kept catching my eyeing, convincing me it was a person standing there. I tried convincing myself that it was just the light, but eventually I decided to be all intuitive and so I spent some time talking to it about the feelings I'd been picking up on. Everything seemed to have cleared and lifted after the thunderstorm and there was a feeling of peace and release, balance restored. I wondered about whether the vibes I'd been picking up on were to do with the transition between the seasons, the kind of confused, liminal period where it's neither here nor there for a while. I felt a certain sense of rightness at this, and didn't doubt that my botched previous attempt and trying to force things hadn't helped. I went inside and did some ogam divination (which I'm still thinking on and I'm not sure if it's for sharing, completley anyway. But it seemed to confirm a lot of things). 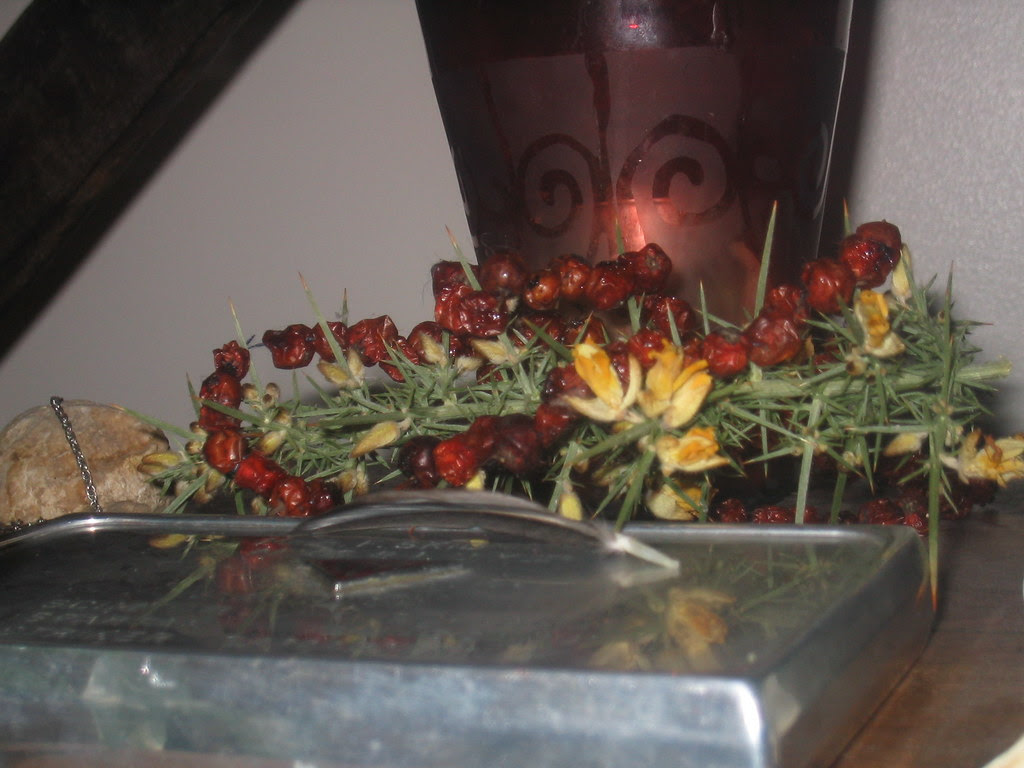 I put some more of the bannock in a bag, poured some milk into a container and some coffee grounds into another and made my way out to walk the dogs, taking the rowanberry necklace with me in case the bad vibes were still around (they weren't). A bat flew overhead on my way and we headed down towards the coast, stopping first at a clearing just at the top of the hill, overlooking the Clyde and Argyll opposite, and there I made my offerings to Lug, Tailltiu and Brigid (the latter being included because I felt she was indicated in the ogam I drew). I stayed for a while and meditated, looking for signs of acceptance, and a light drizzle seemed to come from nowhere, a small cloud that seemed to have appeared overhead in the clear night sky just for me.

Given the associations of rain with the festival, I took this to be a sign indeed, and took the dogs off down to the shore, where I made offerings and libations to Manannan (as I usually do when I go there), the ancestors and the storm hags. The coffee grounds I brought for Badb, for some reason it seemed right.

I'm almost certain I saw a shooting star before I left, but by this point with all the apparent rightness of everything I was beginning to wonder if I was imagining it, seeing what I wanted to see. I headed home, eventually, and as I got ready for bed, closed the curtains and made my night-time blessings I saw a fox scurrying along outside - only the second time I've seen it. It hurried into the hedgerow towards the gap in the fence just opposite the house, and at the last minute, just before it disappeared it seemed to stop dead, come back out and look straight up at me as I stood at the window, before scurrying off up the road.

I slept well that night, and if I dreamt I don't remember what happened. There's a lot of stuff for me to think on from all this, and I think after I got over trying to make things perfect and go according to plan - following the signs instead - things were a lot more successful than I ever anticipated.
Posted by Seren at 01:08 No comments: