In Scottish tradition it's the new moon that's celebrated the most - that first sliver in the sky (known as gob soillse - ’the bill or beak of the light’) that heralds the waxing of the moon, and the period when lots of things can be done under more propitious circumstances; sowing seeds, getting married, setting out on journeys, cutting your hair. This is a time of increase and growth, and Alexander Carmichael recorded quite a few traditions and prayers dedicated to that first glimpse of the new moon. In Gaol Naofa, we celebrate the new moon with a ritual.

If the waxing moon is all about growth and increase, the full moon is the culmination of all this, and is known as bolg reothairt - ’the swollen womb of the spring tide.’ I have to admit I find the moon fascinating, and whenever I see it, I greet it, quietly to myself (because people would probably think I'm a bit mental otherwise). So all in all, the supermoon this weekend was something I was looking forward to.

Mr Seren and I were invited to a party this weekend, a kind of informal gathering in honour of the supermoon and the equinox, so we dumped the kids at the in-laws for the night and off we went. There was food and drink, and good lots of laughter, and since the host of the party is Wiccan I took the opportunity to bring over a load of old books I've had sitting on the wardrobe shelf since we moved here three years ago - I was hoping she'd give them a good home, or knew some folks who would if she didn't want them. 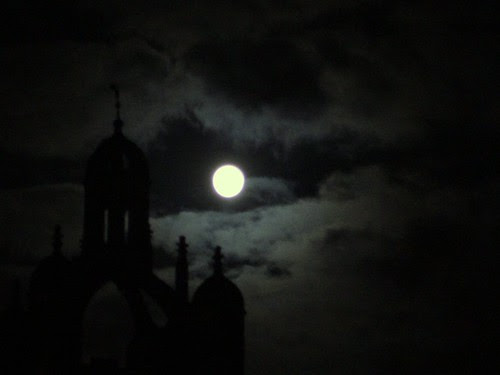 At around midnight we went outside with some Chinese lanterns that our hosts had bought - everyone was invited to choose one and write a wish on it, to send it off into the night sky, and I think most of us did. It was too windy to light the lanterns in view of the moon (Mr Seren's lantern went first and ended up in a bush for a while) so we had to take shelter round the back of the tenement building. Because of the wind it took a while to get them lit, and seeing as we had only two lighters between us all, they had to go off one by one. I waited patiently...: 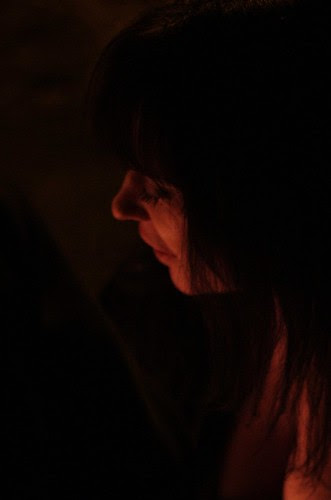 ...while mine was lit as I held onto it gently - we had to hold them pretty close to the ground for the fire to take. It had a bit of a bumpy start, but Mr Seren's friend Tam rescued it and managed to get it off the ground for me. I chose an orange lantern, but this red one here is the last one we all did together (except Mr Seren, who was in charge of the camera): 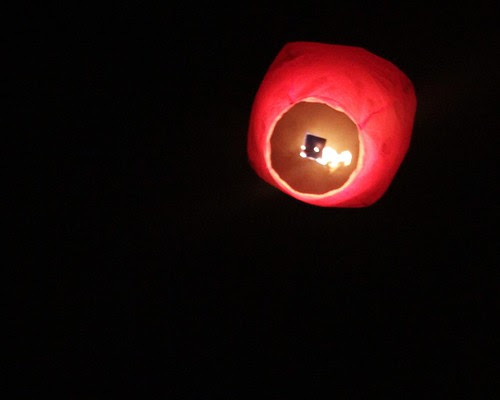 And off it went into the night with the others.

This is the start of my celebrations for Latha na Cailliche, really. I don't usually make much of a fuss - some offerings and devotions to the Cailleach and the Cailleachan - but I don't usually get to celebrate with other people either, so it was good to find a little bit of community, even if we were all from different paths.

When we got home that night I went straight off to bed, and didn't get much sleep thanks to my back and left leg not appreciating the journey in the car to much. I gave up trying to sleep and got up early, and as I pottered about in the kitchen, saw that one of the busy lizzies I've sown for the hanging basket had sprouted. Because of my recent back problems I haven't been able to do much in the garden yet, so this is the only sowing I've done so far. It was good timing to see that tiny sprout, although I'm hoping I'll be able to get around to doing more sowing for the vegetable garden soon.

Spring is definitely here, even if we did have snow, hail and sleet only last week.

Speaking of the Cailleach, I received a letter from Perth and Kinross Council acknowledging receipt of my objection about the proposed hydro-electric scheme that will affect Tigh nam Bodach etc. Very formal and stern it is, too, but I'll be informed of the council's decision in due course, although it didn't say when that might be.
Posted by Seren at 10:28 2 comments: Links to this post