You may have noticed I have a bit of a thing about cows... 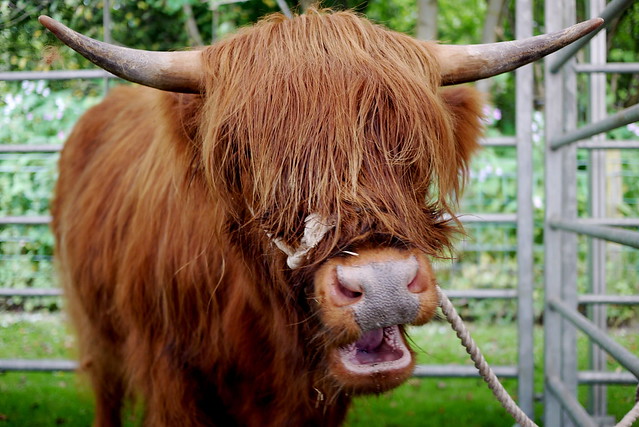 Part of the reason I chose "Tairis" as a name for my website is that I found a definition given in Macbain's Dictionary that described its meaning as:


tairis! int. The dairymaid's cry to calm an unruly cow at milking.

Ordinarily, however, it means:

And while the latter definition seems apt in itself, the former meaning tickled me enough for it to stick in my head. When the time came to buy a domain name I couldn't think of anything else so that's what I went with.

One thing I always wondered, though, was that in all of the milking songs I'd seen (in places like the Carmina Gadelica), the term was always absent. I figured maybe it was either a very localised term that Carmichael never came across, or else perhaps Macbain himself had kind of... made it up? Misheard it? Today, though, I came across the following song thanks to Google, and things make a bit more sense now. The song itself was recorded by the folklorist "Nether Lochaber," the pen name of Rev. Alexander Stewart, who lived in the area he took his pseudonym from. In the song we have teiris, not tairis, though Dwelly gives Macbain's spelling and lists teiris! as a local variant of the same word, recorded in Poolewe – which is in the Nether Lochaber area. As a plain old verbal adjective, however, the word teiris is listed as meaning:

So it all makes a bit more sense to me now.

Gaelic milking songs were kind of legendary – folklorists of the nineteenth century often liked to note that Highland cattle were some of the best milkers in the world, and it was said that a cow of the Highlands wouldn't give milk unless the dairy maid sang to it a soothing song. Since I can't find the song recorded by Rev. Stewart published anywhere else, I thought I'd transcribe it here (the site I found it on has a poorly done OCR transcription).

As this piece notes, the song was originally published in the Inverness Courier, though no date's given for that. In the copy I found, though, the date given is Saturday 23 March 1895, and it's interesting that this is from an Australian newspaper, the Northern Star from New South Wales. Anyway, here it is, with the newspaper's own write up. I've transcribed it as best I can, though some of it was difficult to read. I'll note that some of the words have the accents in the wrong place, as far as I can tell, but I've kept it all as-is and I haven't updated any spellings either. The translation is as given in the paper, though it's not completely literal – there's an extra line added in (and hopefully the table comes out OK; Blogger can be finicky with tables so if the formatting's off, apologies):


The following Oran Buaile or Shieling song, as sung in the Highlands of Scotland, was taken down from the words of a woman still living in Adnamurchan, and sent to “Nether Lochaber,” who gave it a place in the INVERNESS COURIER. It will be interesting to Highland readers, many of whom have perhaps heard it sung:

There is considerable humour in the song, as in the way the heifer’s character is exalted at the expense of the Ayrshire cattle of the township, who are spoken of with contempt as only understanding English, while her own heifer (a genuine West Highlander, we warrant her!) is so thoroughly up in Gaelic that she understands its every word! TEIRIS is a term of conciliation and kindness used in soliciting the friendship and good behaviour of cattle in stall – something like the “Gently, now,” of a good-natured groom when astride a steed disposed to be skittish. To be of effect it has always to be uttered in a conciliatory, or in what may be called a wheedling tone of voice. It is never addressed to horses; only to the bovine race, in their every stage of growth from clashed to extremest old age.