Gaol Naofa is proud to present our latest article for the website, this time focusing on Children and Family in Gaelic Polytheism.

Although the main purpose of the article is to give parents ideas on how to include children in a family-based Gaelic Polytheist practice, we hope it will also prove useful for individuals – whether youth or adults – who are new to GP, as well as to other sorts of multigenerational spiritual communities.

The basics of belief and practice are broken down into their various elements, and practical ideas and examples of simple prayers are given that a child or beginner should be able to get to grips with easily enough.

Usually this day sneaks up on me somehow, but for once I managed to keep track of time long enough to be prepared. Hurrah! I'd make a terrible Brownie or Girl Guide. Whichever one is supposed to Be Prepared.

Aside from Samhainn, this is the festival that the kids love the most and are keen to get involved in, mainly because there are lots of things for them to do and make. Also, Rosie in particular thinks of Brìde coming around with her cow as being akin to Father Christmas dropping round, except this time we have to leave presents for her. I assured Rosie that we'd leave out some food (just like we do for Father Christmas, after all), but she insisted on something more: 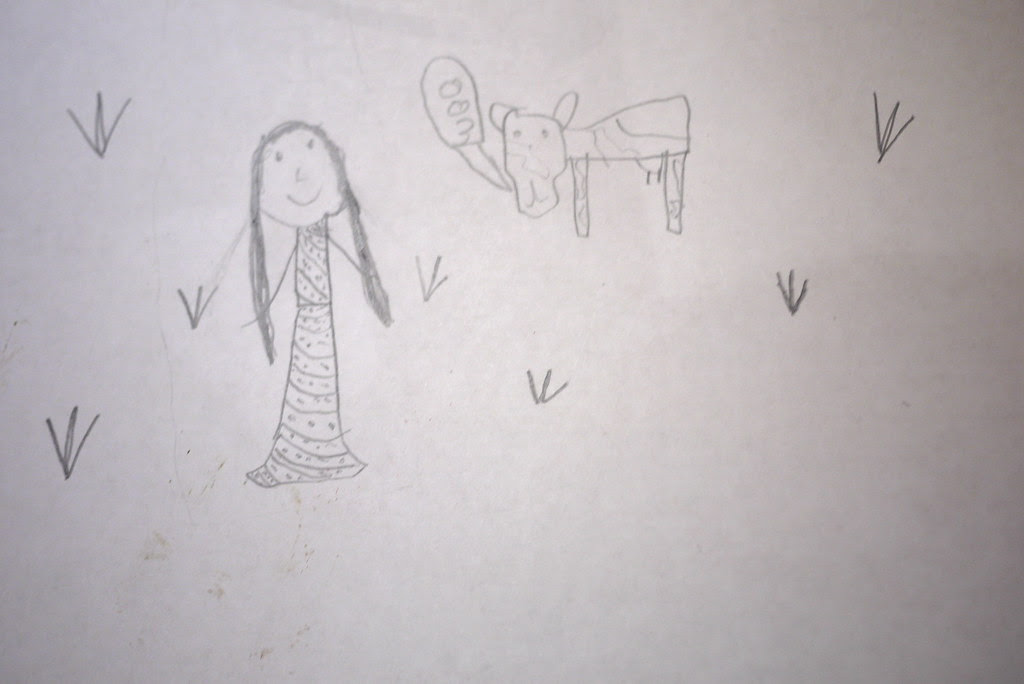 She drew a picture before it was time to go to school on Friday morning and was going to colour it in later, but then decided she didn't want to ruin it. I've no idea why the cow is saying "oom," so I can only conclude that bovines, like gods, work in mysterious ways. Or else six-year-olds do.

I wanted to get hold of a kit to make our dealbh Brìde but the local garden centre didn't have anything that was particularly appropriate for the kids to join in with. The next best thing was a book with a set of pipe cleaners and some ideas for things to make, which were simple enough for the kids to make themselves. Tom wasn't sure he was keen on the idea of making a doll, so it seemed more inclusive, too, which was a plus. In the end, the day before we were going to celebrate, I made the dealbh Brìde and the kids made some of the things from the book. We ended up with quite the menagerie: 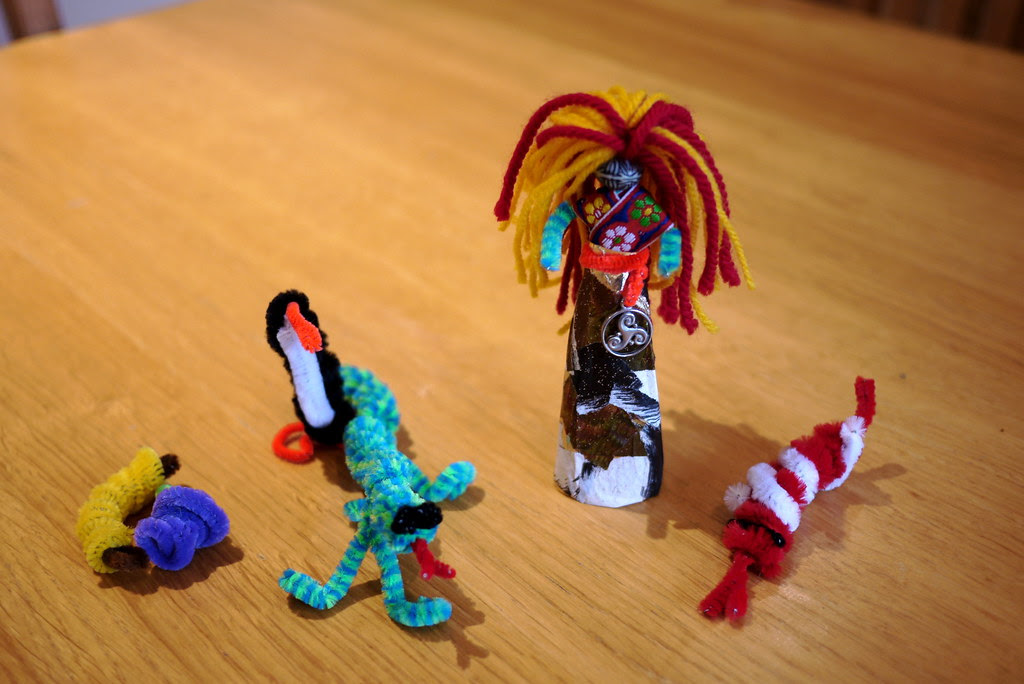 Tom made a snake all by himself, which seemed quite apt. Accompanied by a very authentic lizard, penguin, grape, and banana, I'm sure you'll agree. The grape ended up being repurposed as a lantern for Brìde, at Rosie's insistence. She's taken the festivities to heart this year.

So on Friday the house was cleaned and tidied, ready for the evening of festivities, and then we feasted on roast chicken with sticky toffee pudding (at Tom's insistence, and which he made), we danced and sang, and we invited Brìde in and set the icon in her bed. The house was sained and devotions and offerings were made, and the kids took forever to get to sleep because it was all just so damn exciting. At bedtime they decided they wanted to leave a blanket out each, for blessing, so I promised I'd do that for them. I put some things out for me and Mr Seren as well.

We didn't have time to fit everything in so some of it spilled over into today. Rosie and I made a cros Bríde each: 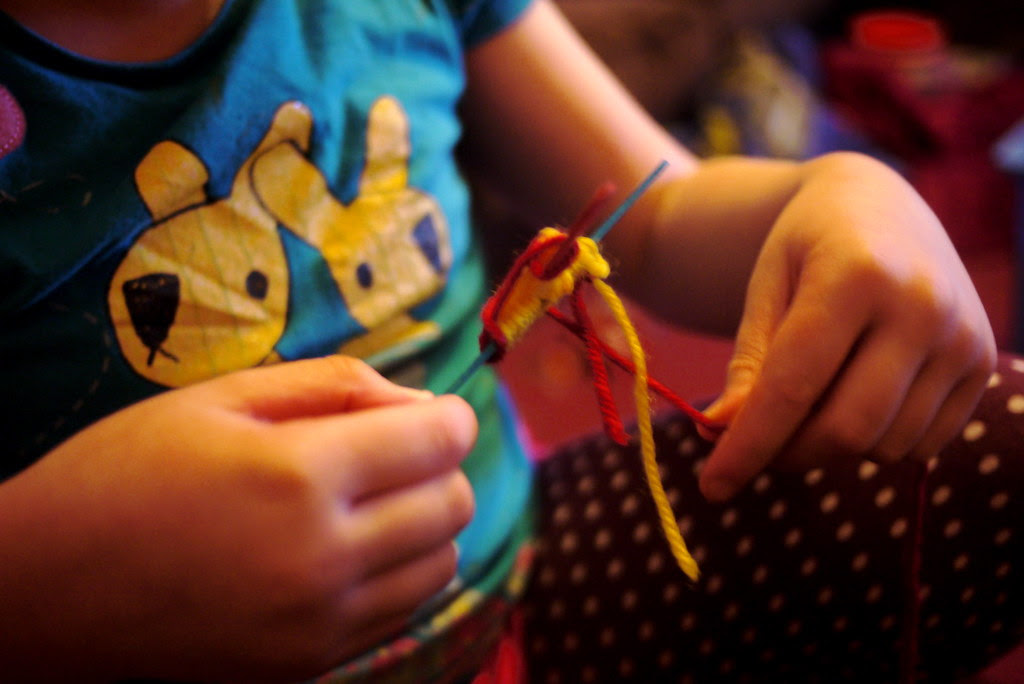 And then Tom decided he'd like one for his room, so I said I make another one if he wanted. He wasn't keen on doing it himself, so he picked the colours and I set to it. The one I did is the largest, while Rosie picked red and yellow for hers. Tom wanted a mix of all three: 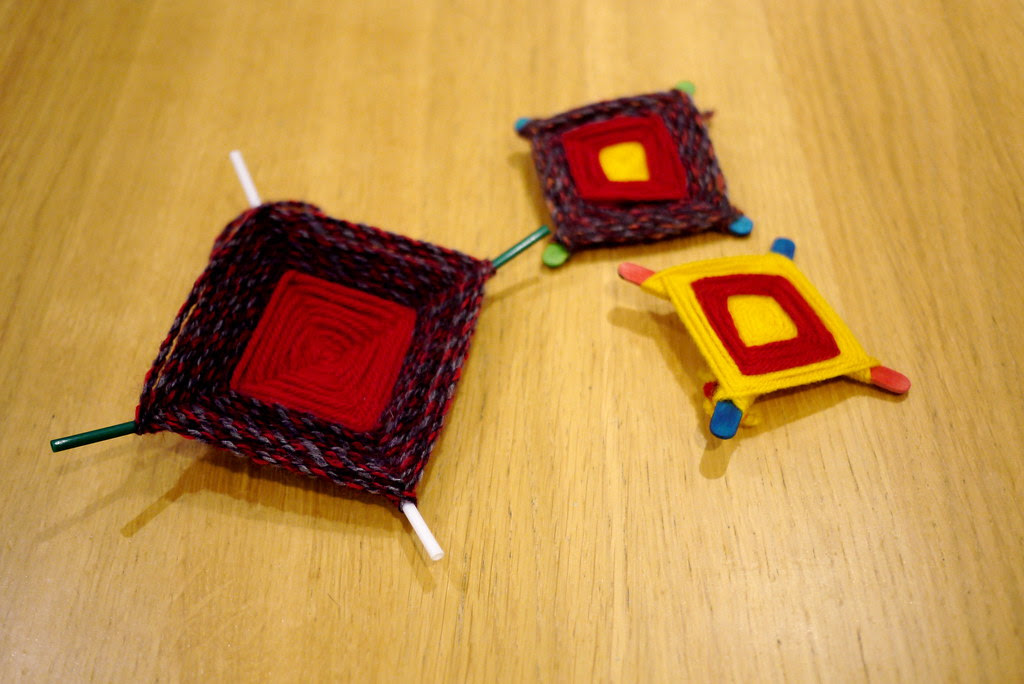 For dinner this evening we had beef and barley stew with another go at Skye bannocks for after, which I blessed as I made them: 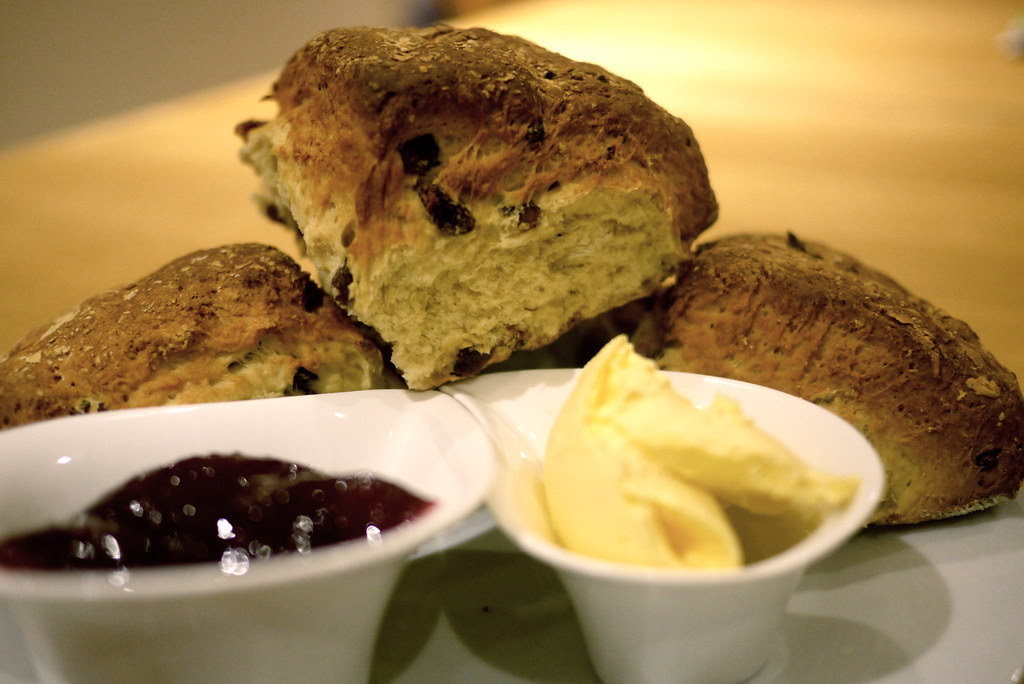 They certainly looked better than the first go I had at Lùnastal, but the blackberries I put in then were a nice addition. The sultanas I added this time round were good too, but blackberries have the edge, I think.

While dinner was cooking I had to nip out to the shops to get some bread and Rosie took it upon herself to write a poem for Brìde as she entertained herself with Minecraft. It was completely her own idea, and she was very excited to show it off once I got back. I insisted on taking a photo for posterity: 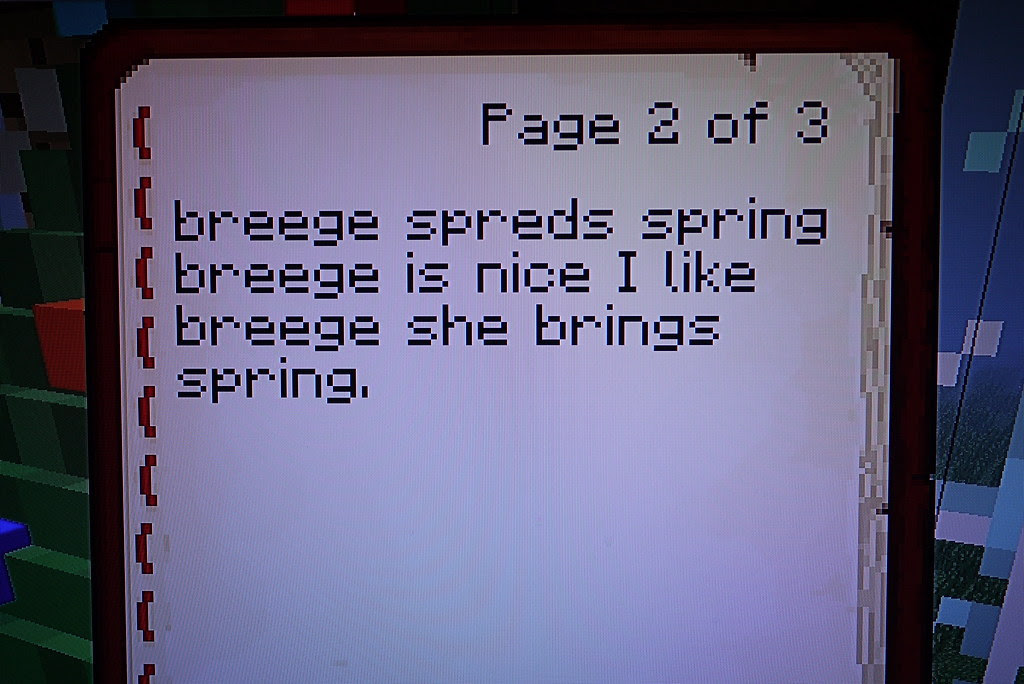 Then when I went to dish up the dinner and the kids were waiting at the table, there was a miracle! The kitchen windows had steamed up and a heart had appeared on one of the panes of the back door where we'd invited Brìde in the night before. The kids insisted that neither of them had done it and Rosie was so giddy because that just had to mean Brìde had been to visit, she almost passed out. There was definite communication with dolphins...

All in all, things seemed to come together nicely. As much as I've been at this for a good while now (by today's standards, anyway), now that the kids are starting to become more involved with things it's like being able to see it through a different point of view at times. One thing that's becoming more clear than ever is that it's the simple things that can be the most meaningful, whether it's a heart in the window or the first crack of sunshine after weeks of cloud and rain and sleet.

Brìde has been. Spring is on its way. Brìde is welcome...
Posted by Seren at 01:43 No comments: