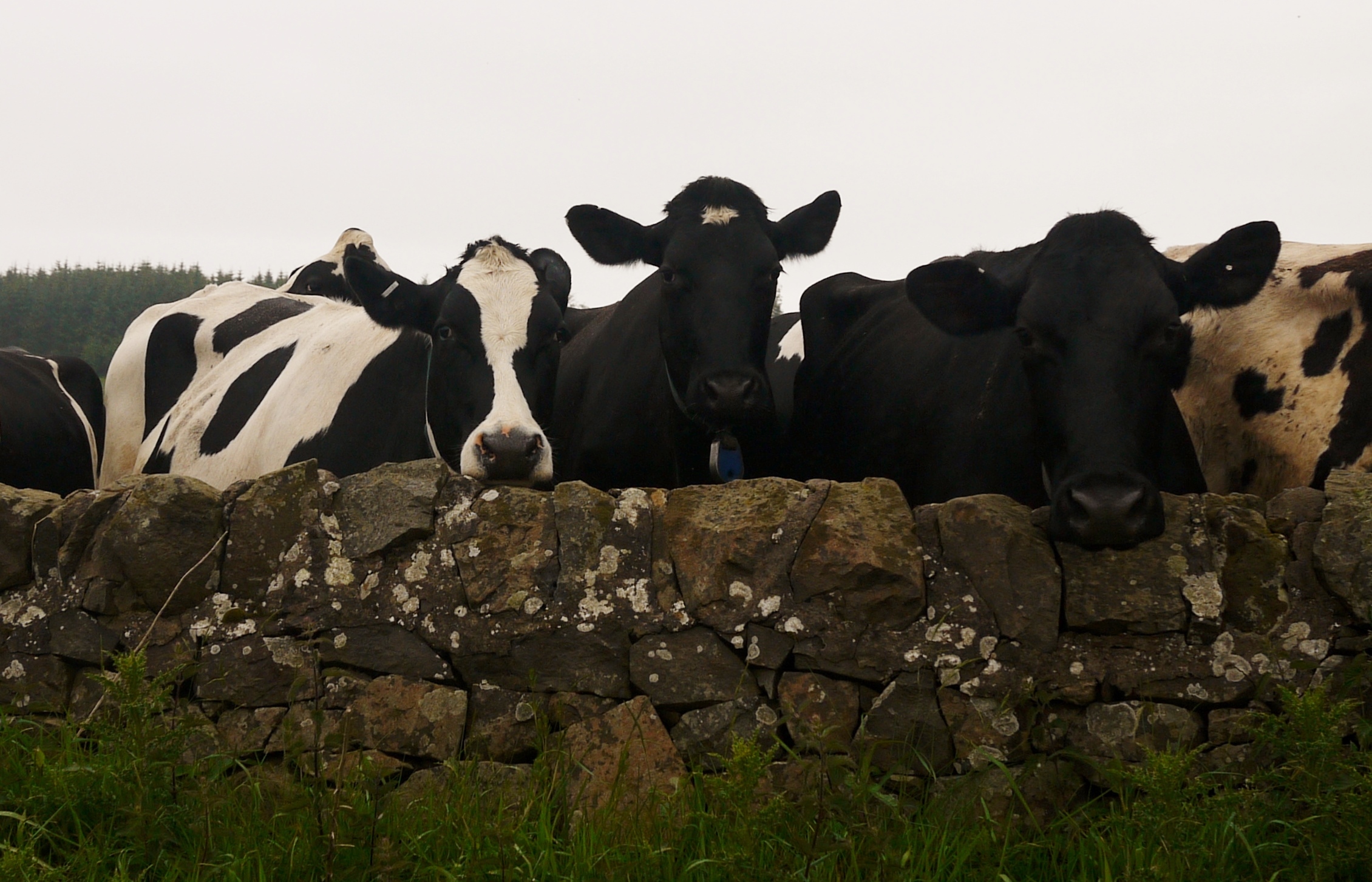 After Loch Lomond (in my previous post), we decided to take the ferry over to Bute in honour of one of my friend's birthdays; her day, her choice. After having spent many an hour for mythical buses on one of our trips over to the island, we decided to take the car with us this time, so we could explore more of the island at our own leisure - the bus service is actually pretty decent (if you read the timetable... *ahem*) but it doesn't take you to the more remote areas and I think you're probably less likely to get stuck behind many many cows who'd quite like their lunch please. The ones above were waiting to join their friends already on the road. Driving around the island made a nice change from visiting the castle at Rothesay yet again - don't get me wrong, it's a good castle, as castles go, but I've been there four times now, most recently with my sister and nephews when they came to visit at Easter. The weather was considerably nicer then, though.

We took a stop at one of the beaches first, then went on to find a derelict church, which turned out to be an early medieval monastery founded by St Blane. The place was a bit of a hike to get to, but beautifully situated in a very sheltered spot near the top of a hill, overlooking the coast: 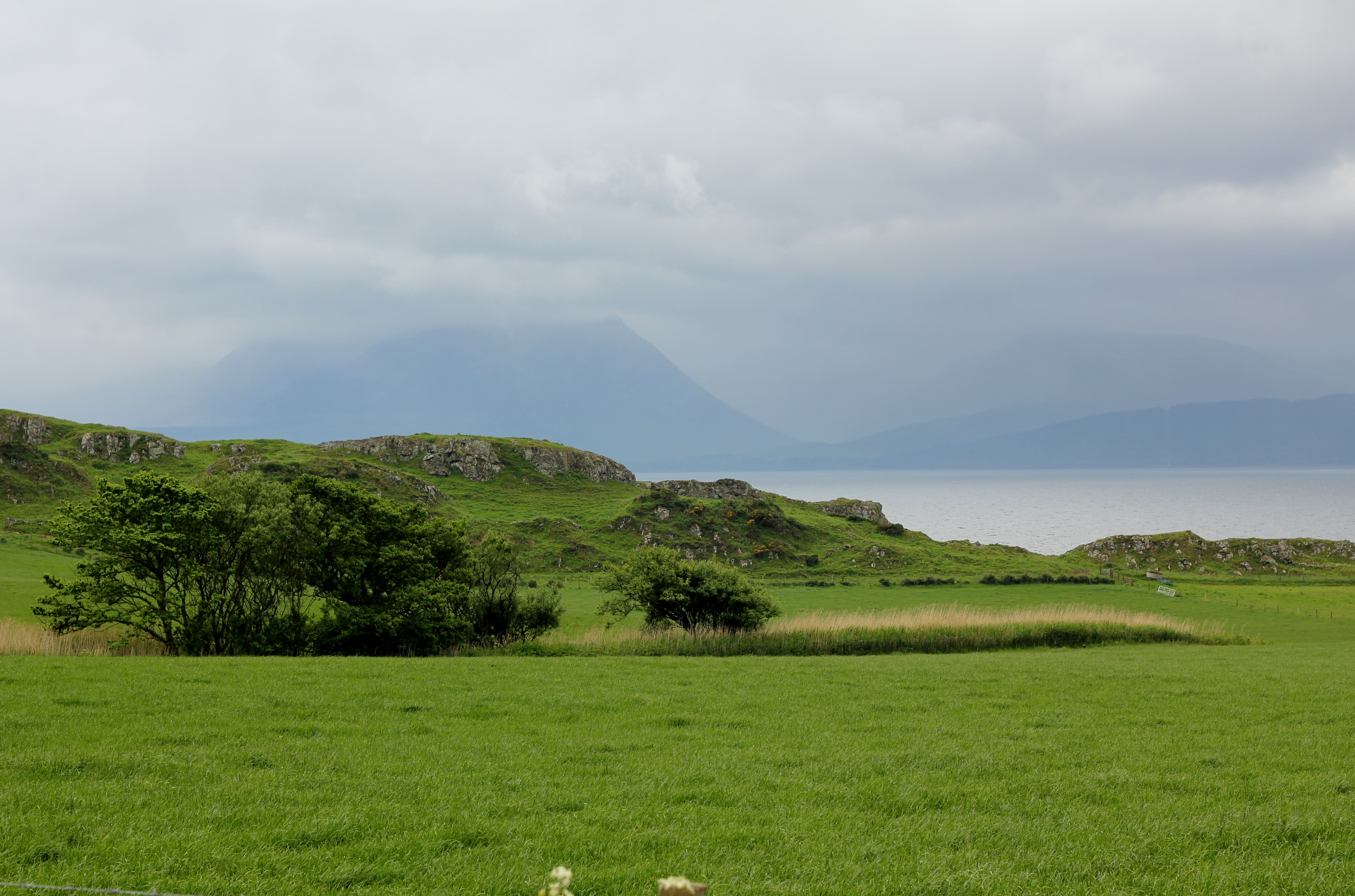 It's a shame it wasn't sunny, but at least the rain held off until we were ready to get back to the car, and I guess the weather gives its own mood to the place...

The path up to the site was home to many many sheep and lambs: 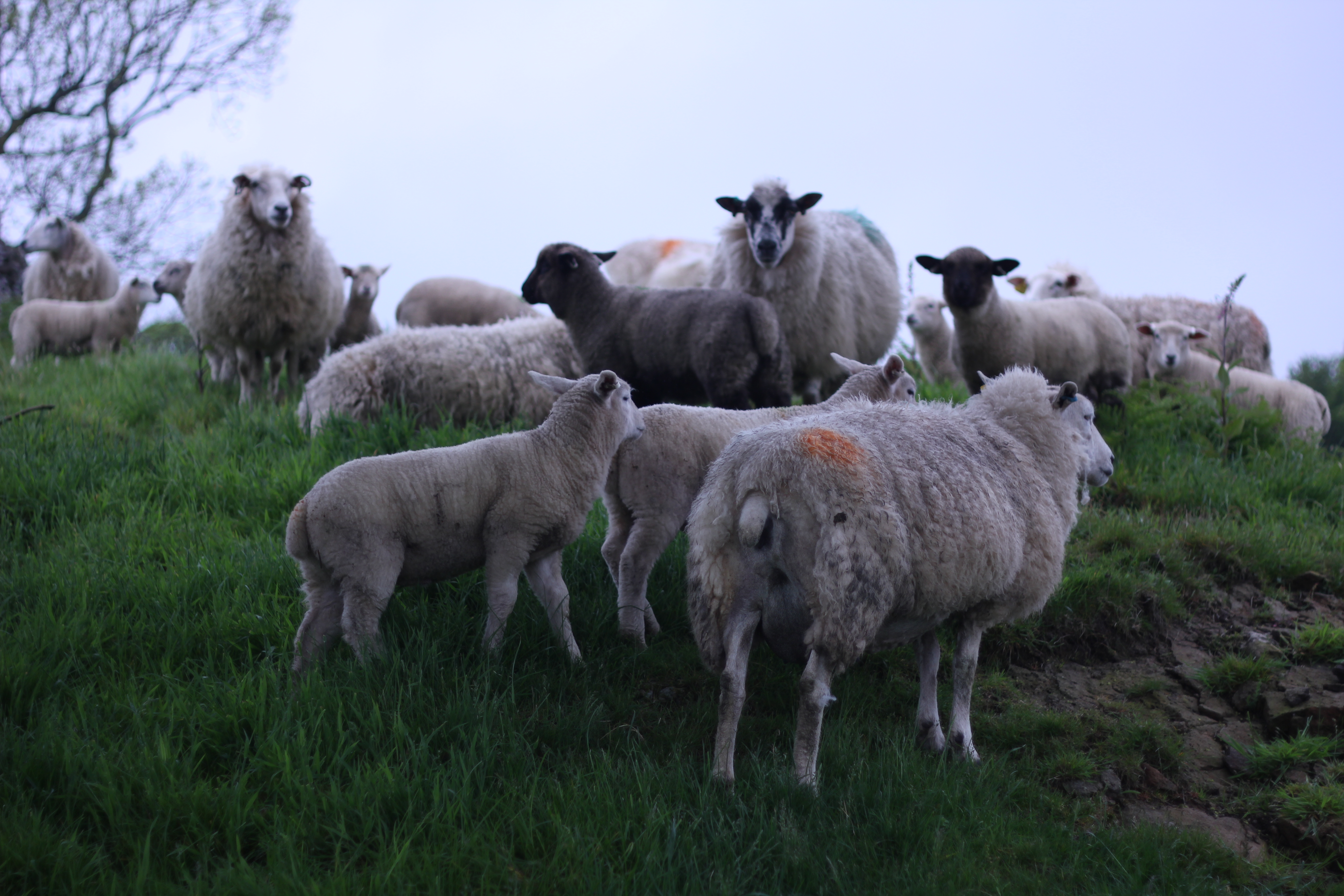 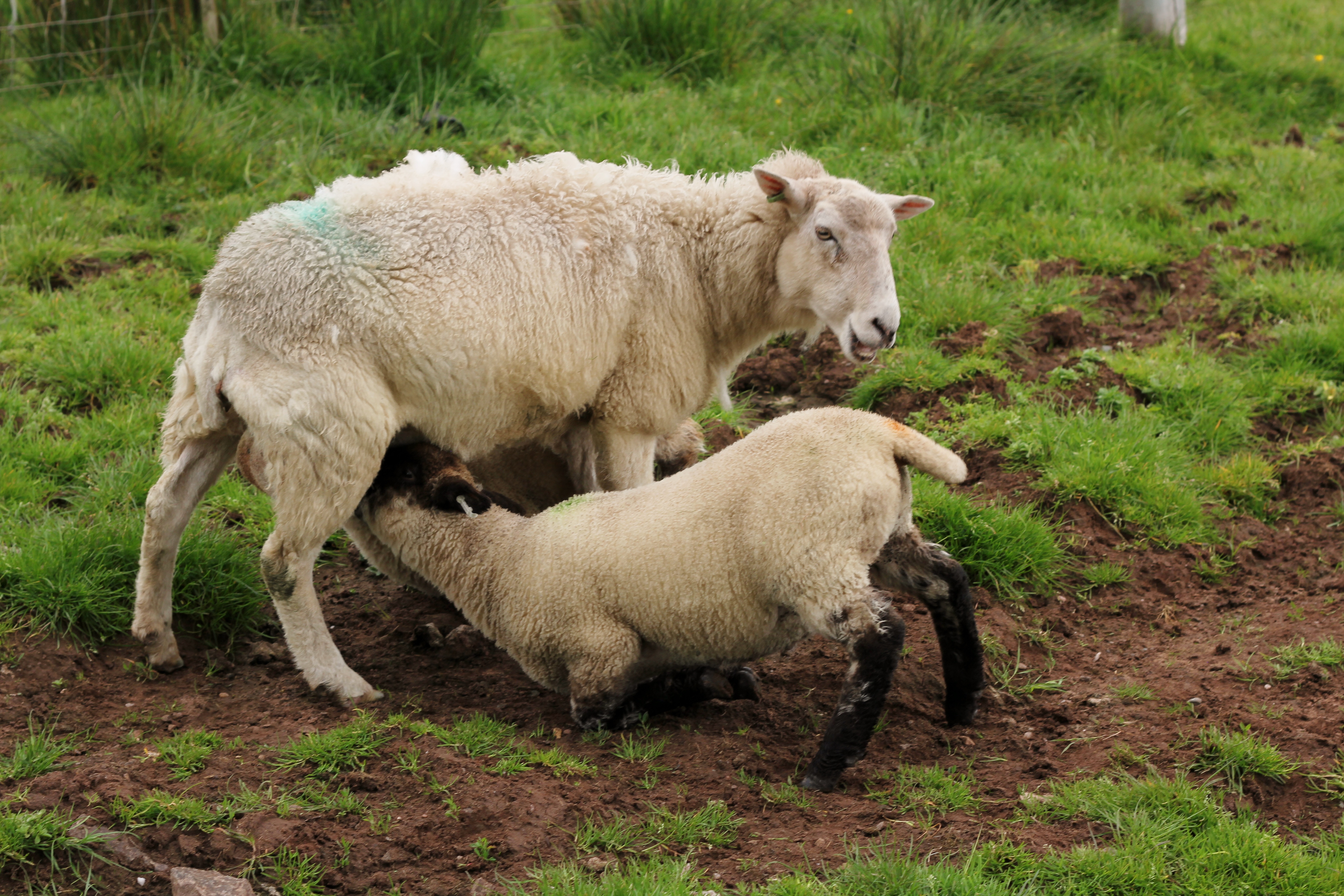 Who were quite skittish and suspicious of us at first. They seemed to calm down if you baa'd at them, so why not...

But anyway. Up at the monastery there's a mixture of early medieval and then more recent ruins. The church itself has twelfth century bits, but it's mostly later, up to the eighteenth century when it fell out of use. Some of the surrounding remains, including a well and some surrounding ruins of buildings of "indeterminate purpose" are probably early medieval but it doesn't seem like there's been much investigative work (or if there has, no one's updated the information plaques) to date things; the monastery itself was established in the sixth century, though.

After the site fell out of use as a monastery it was used as a church for locals in the area - quite a trek to get to, I'd say. The graveyard was segregated, with the men and (earlier) the monks on the higher terrace, closest to the church, and the women buried on the lower terrace: 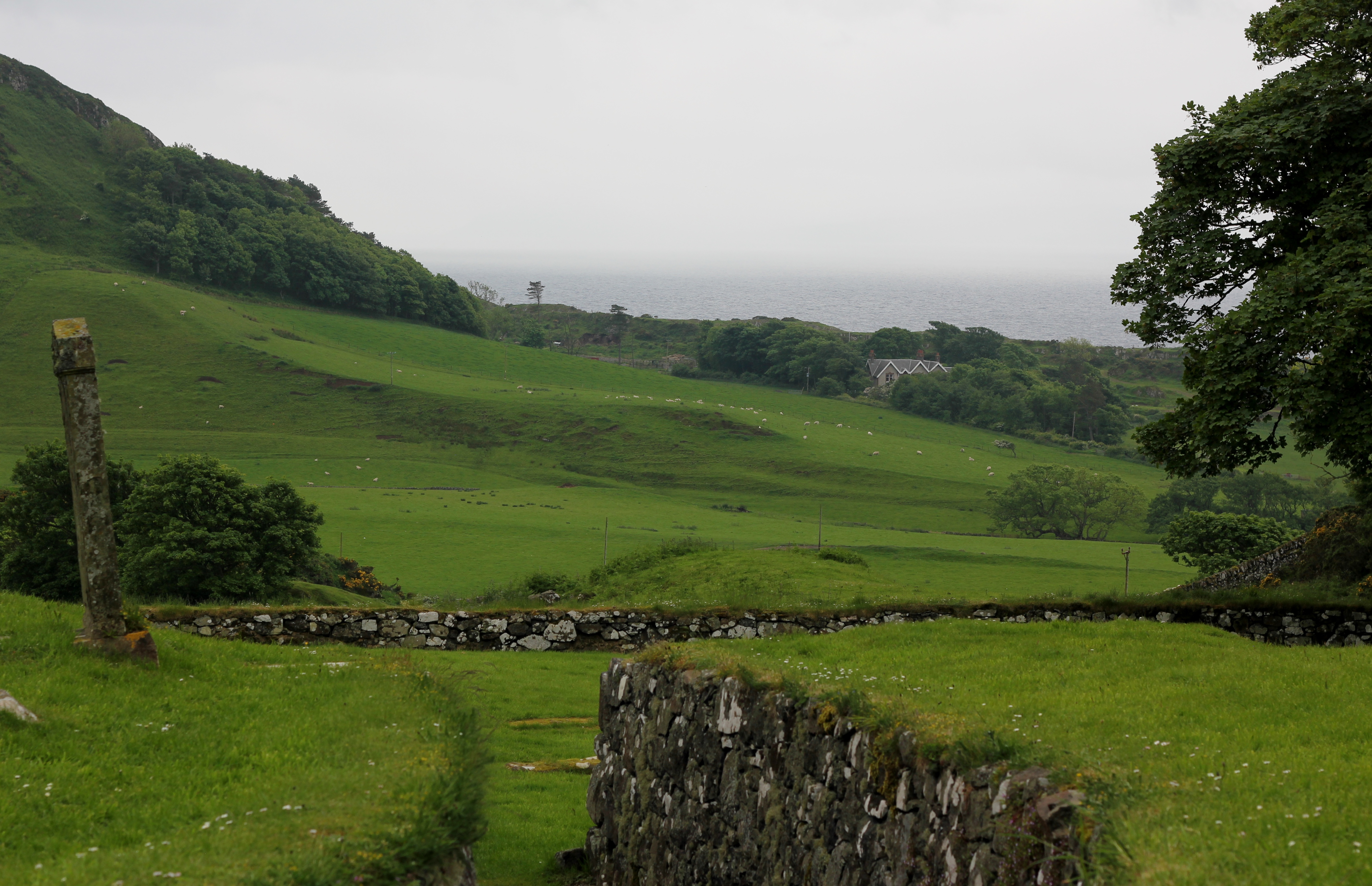 Here's a moody view of the church from the side(ish): 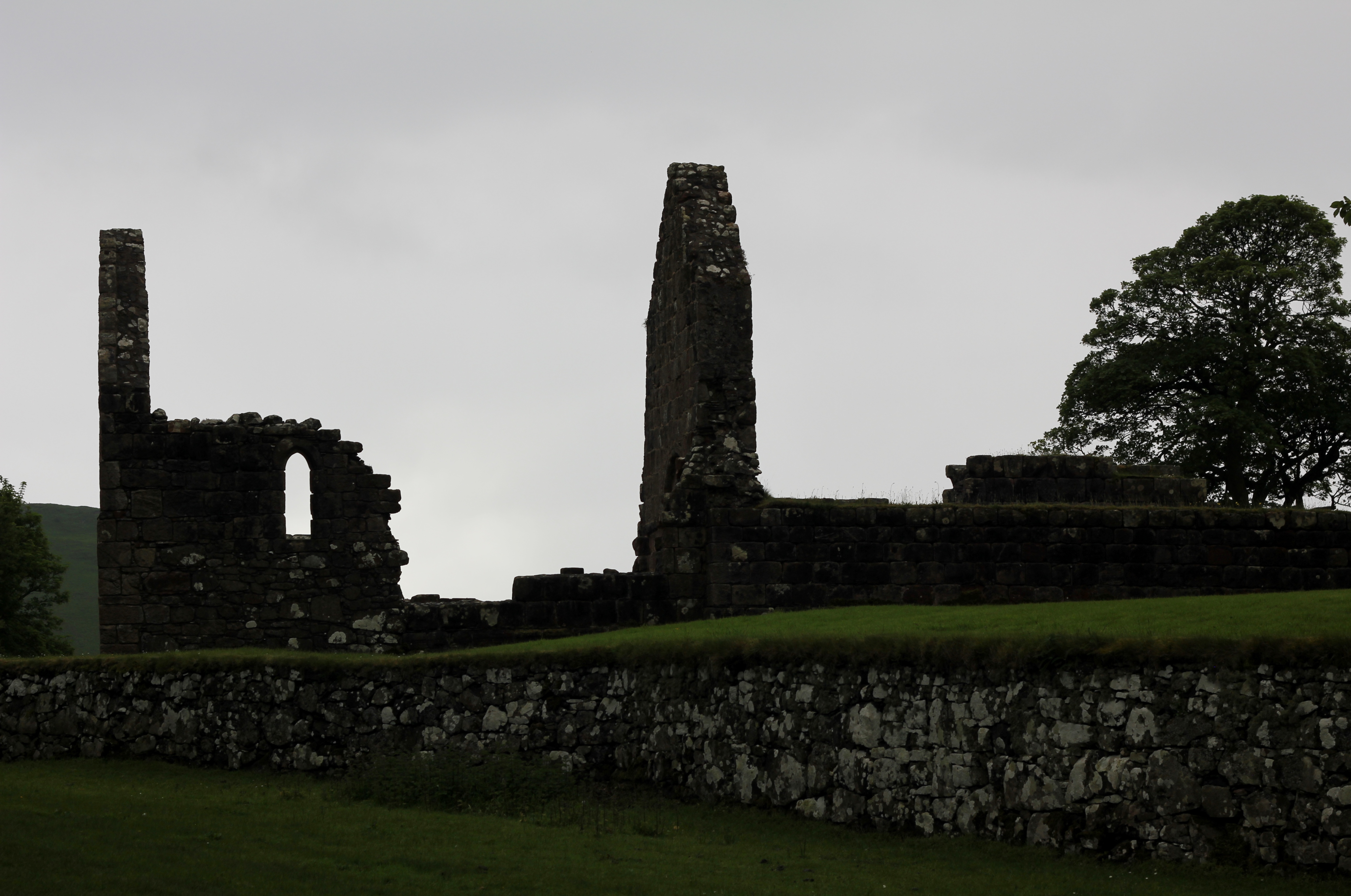 And here's more of the lower terrace, where you can see the rounded vallum (boundary wall), which tells you it's the original, early medieval boundary for the monastery: 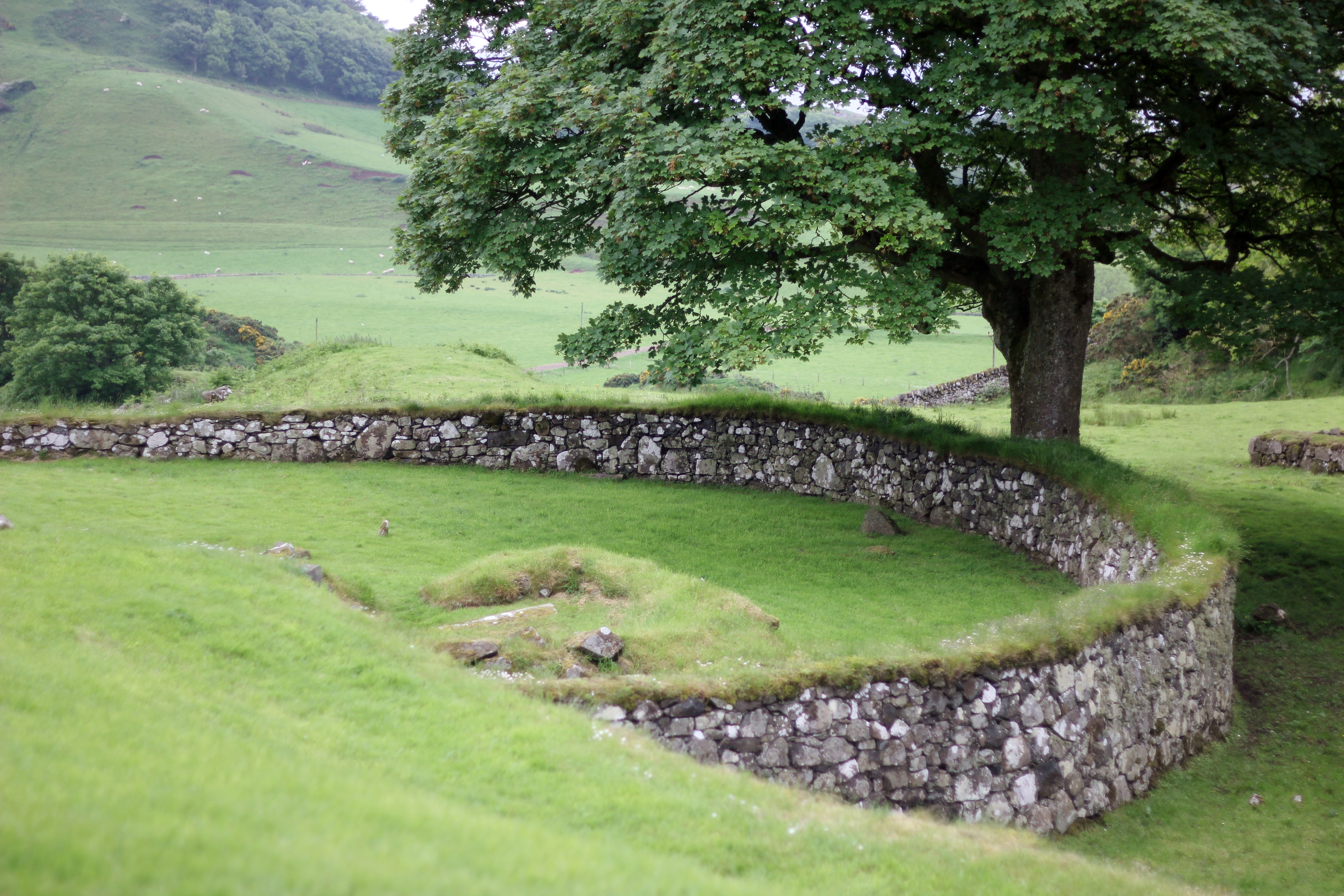 Considering how early the monastery is, it's not surprising to find that it's situated just down the road from a stone circle and a stone row - sites like this were often plonked right in the middle of already significant, sacred areas. Maybe it was supposed to help provide a sense of continuity - a change in religion, but not too big a change in setting, perhaps - or maybe it was just practical (to be fair, it's a smallish island. It's pretty hard not to fall over the odd standing stone or stone circle somewhere).

As we made our way back to the main road we stopped in at the Blackpark stone circle. Only three stones remain now, and I don't think the surrounding forested area would have been there when the circle was in use so it was difficult to get a sense of the place. The layout seemed pretty odd to me, but I think that's because of an attempt at restoration on one of the stones, which fell down and seems to have been put back up on top of a small mound, for some reason. One of the stones is extremely weathered and it seems like an aggregate of some sort, different to the other rocks (it's the one being propped up), which is also unusual: 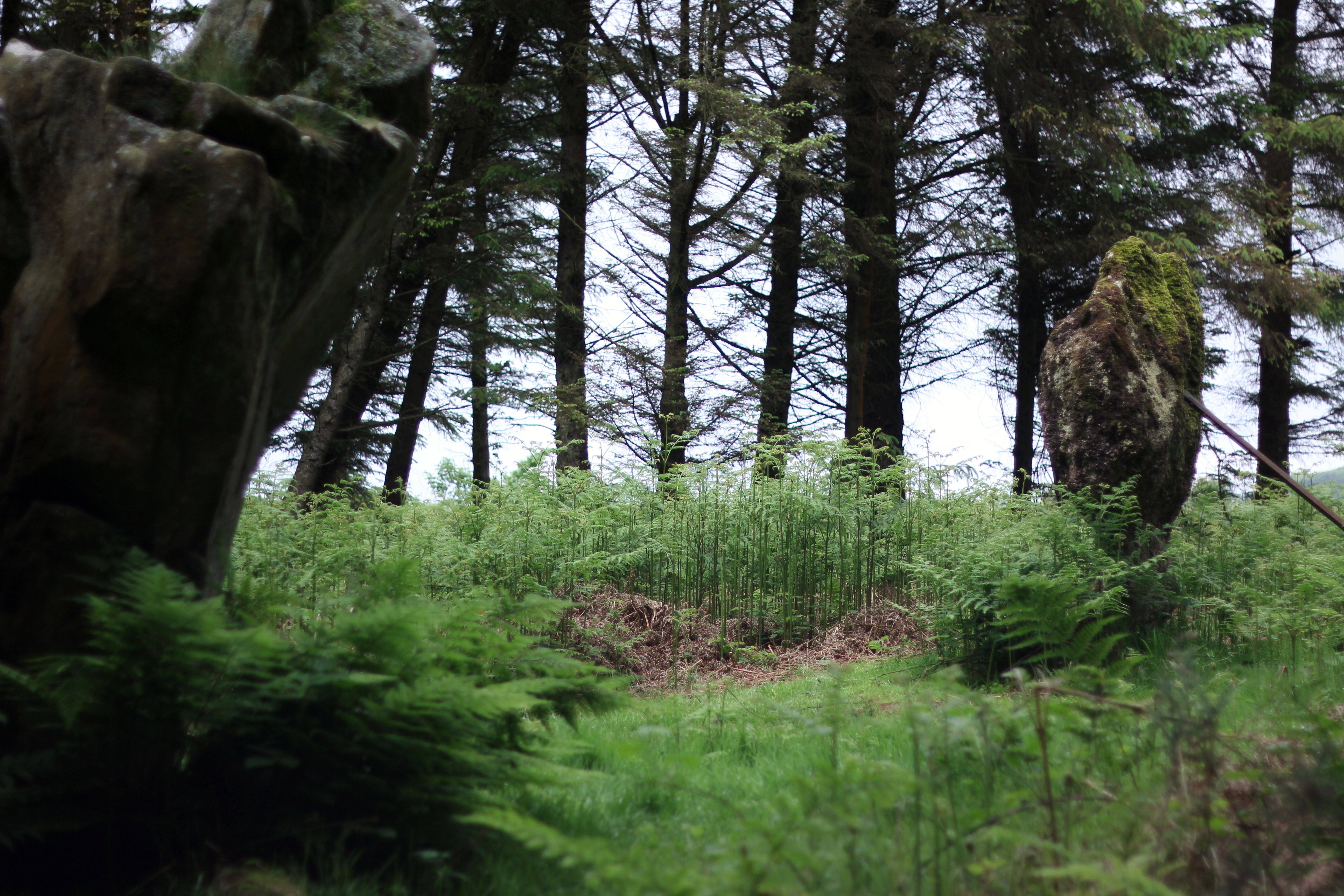 The larger stone, on the left, has cracked in several places due to frost, and is almost completely split in half now. To the left of that one there's the other stone, which is much smaller than the others and it's been graffiti'd over the years.

Just down the road, between the circle and the monastery, is the Largizean stone row. It's about a 30 minute walk from the circle (according to the information board), but we doubled back in the car to save our legs a little. It was still a bit of a walk along a track to get to it, and it's stuck right in the corner of a field. Looking back towards the stone circle: 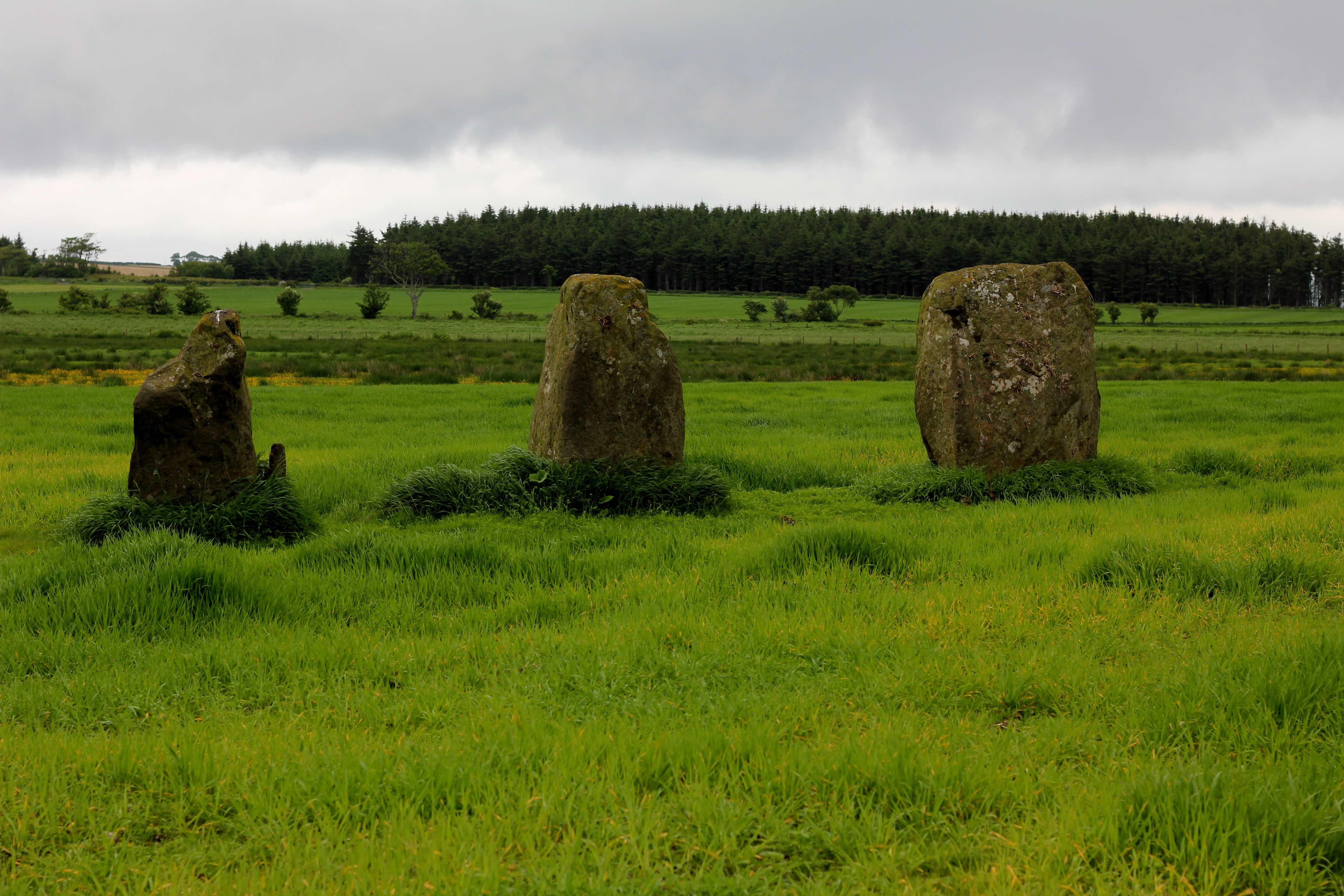 And then looking out to sea in the direction they seem to be pointing: 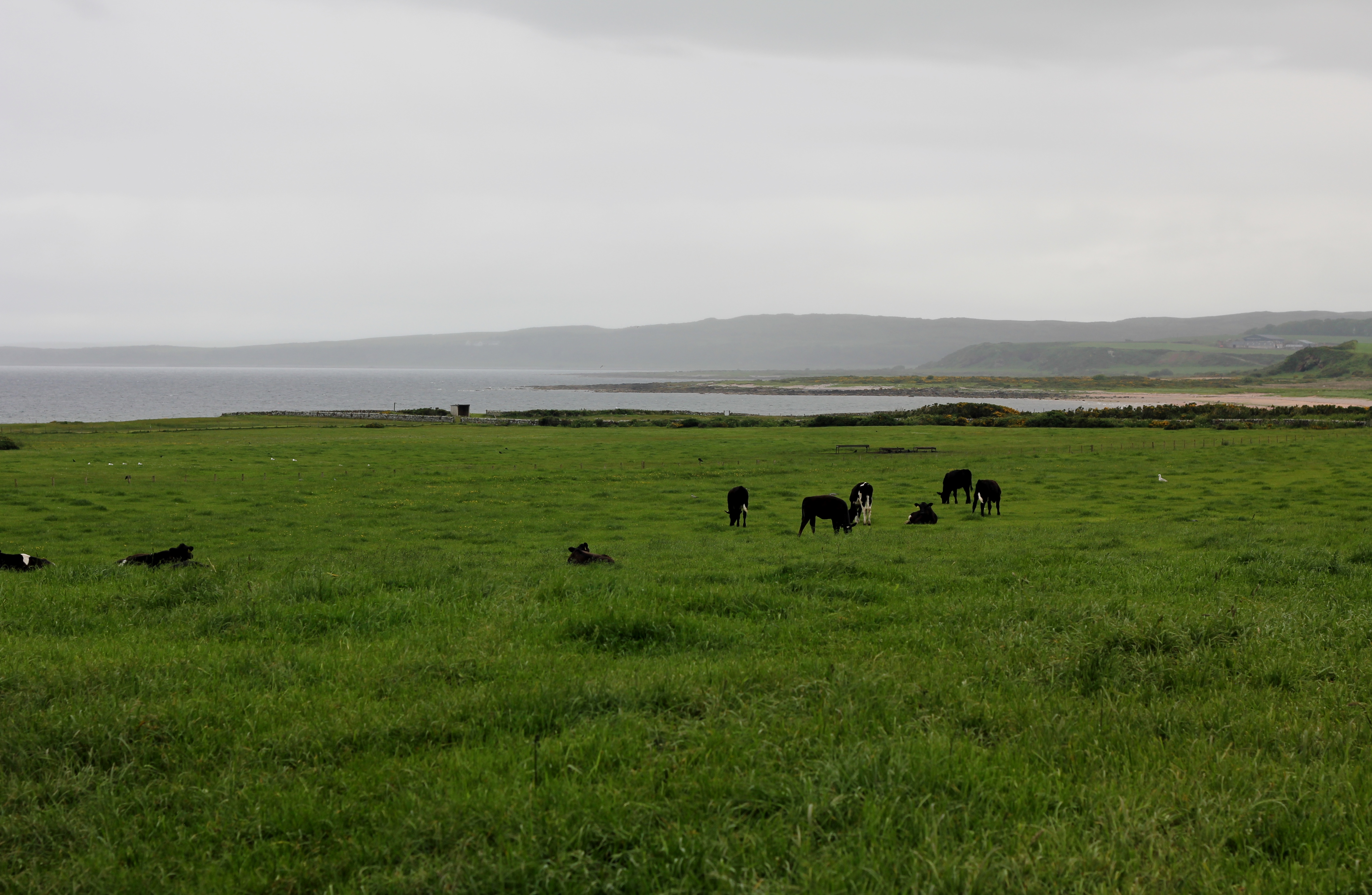 I don't have an exact date on the stone row or circle, but I'm guessing they're most likely to be late Neolithic. Possibly early Bronze Age, so roughly 4,000 years old or so.

We toured around the rest of the island after a spot of lunch, just so we could say we'd been to the Highlands proper - the Highland line intersects only part of the island - and stopped in briefly at Ettrick Bay (which is a beautiful sandy beach, when it's sunny and the tide's out). The weather was really turning on us at that point, but apparently there's a stone circle near the beach as well, so that's something I might hunt out at some point - the beach is easy to get to by bus from the main town, so if we don't manage a holiday away this summer I might take the kids there.