In which I left the house and Did Stuff

All last week I had some friends visiting, much to my excitement because it meant I got to Do Stuff With Grown Ups. Mr Seren graciously (in his own special way, i.e. with much good-natured whinging and moaning) took charge of the kids while I went off gallivanting around Scotland and all kinds of fun stuff. I finally got around to going to visit Paisley Abbey and spied the xenomorph carving: 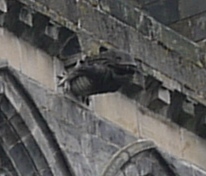 Which was pretty high up so the picture is grainy because it's so closely cropped; I first learned about the xenomorph from some links that went viral a while ago and the abbey went on to my list of places to see and then I promptly forgot about it. But seeing as we were going to be nearby, at the museum, and had an hour to kill before that opened, the abbey was a good opportunity. There were some beautiful stained glass windows there as well (and a very talkative warden).

I'll start with our trip to Luss in Loch Lomond, though, and given the amount of pictures I took I'll probably spill over into a couple of posts after this. Loch Lomond was our first big day out (involving lunch and cake, naturally). I've been there many times now, but this time I had the chance to wander around a bit more and we visited the village church as well. The village itself is very picturesque (here's some I took from a previous visit, when it was sunny): 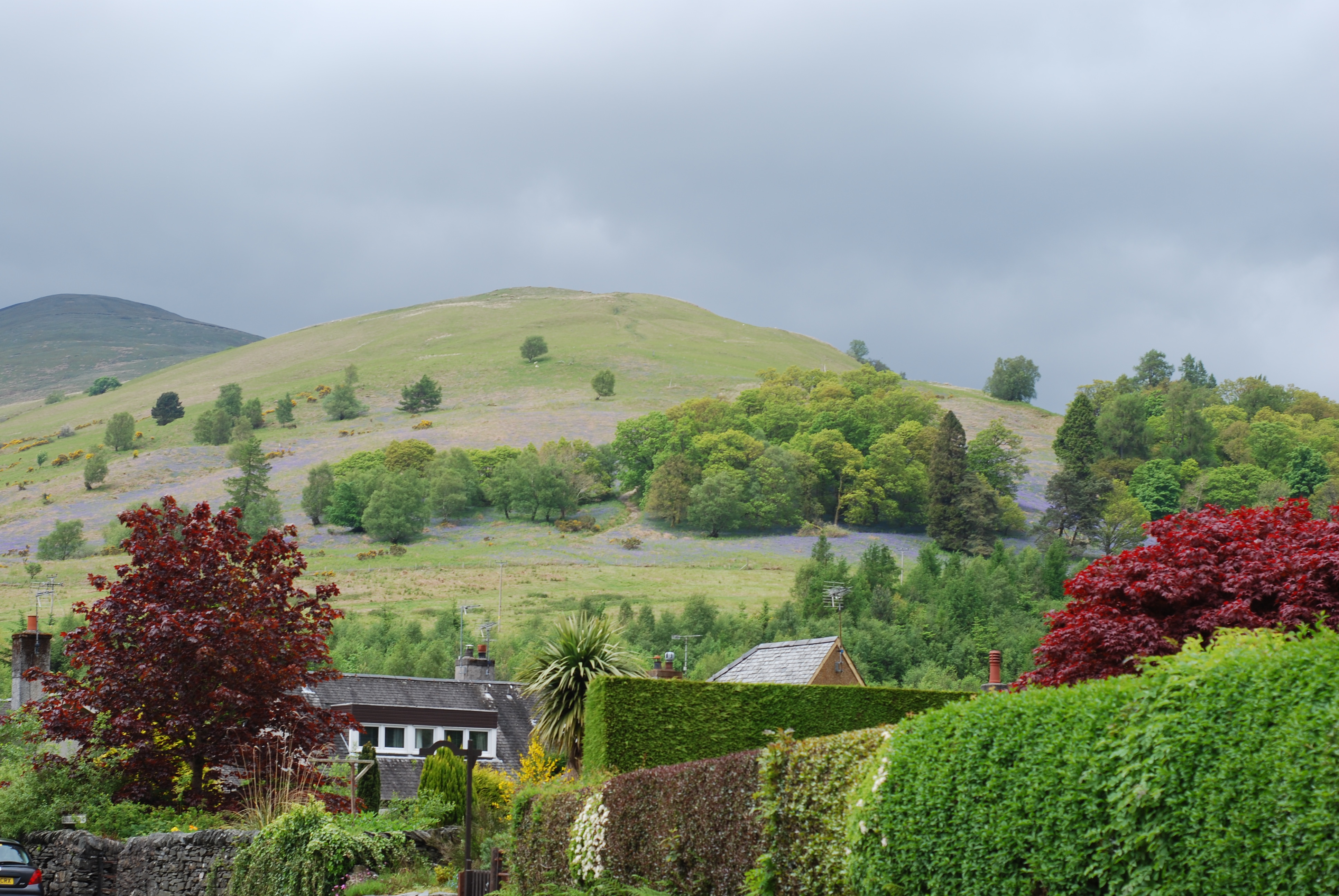 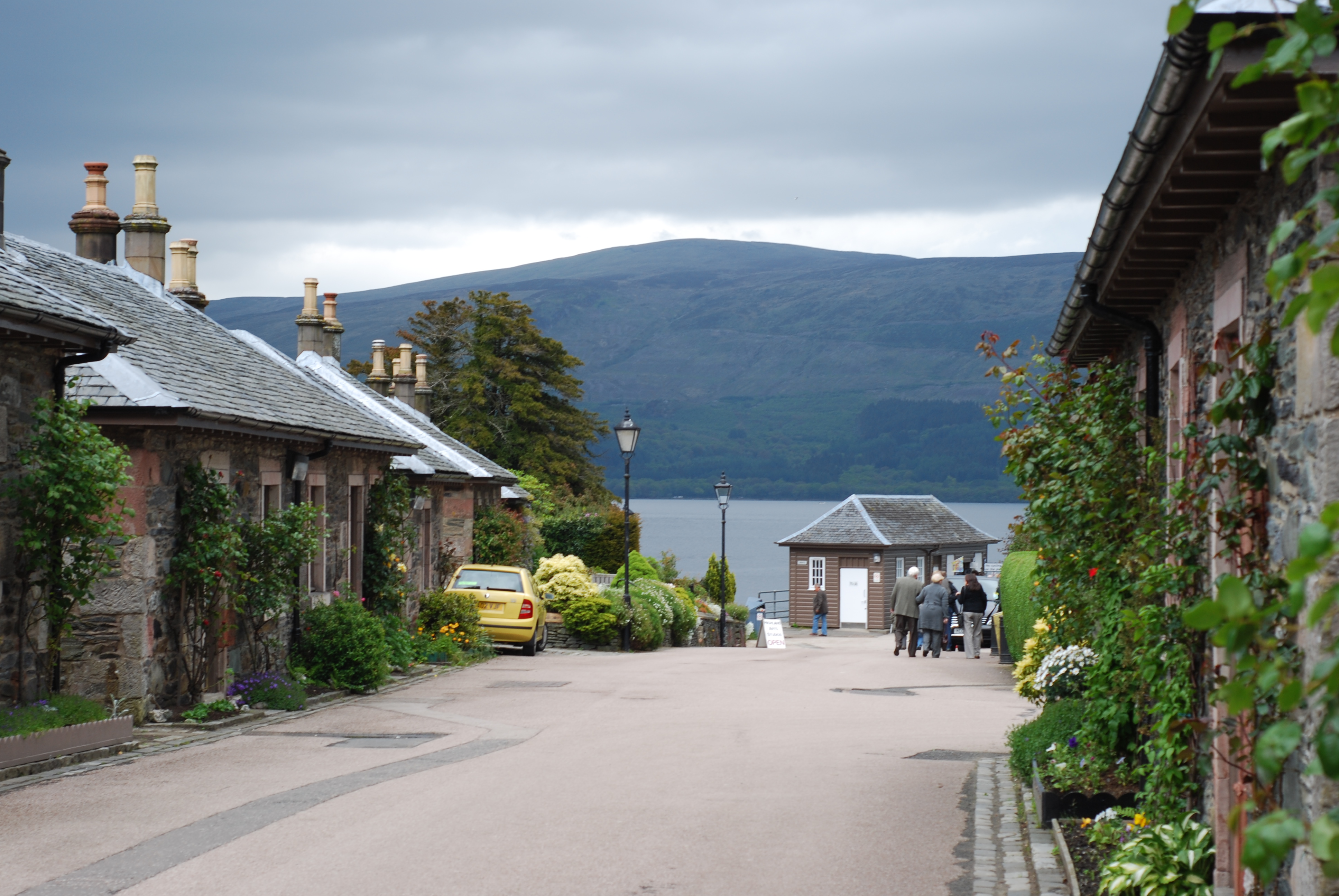 The church is really unusual, with the pulpit and font situated in the middle so everyone sits around it and can face each other. It's also beautifully done inside, but I didn't take too many pictures because the warden (or whoever he was) was very obliging in giving us a history and I didn't want to appear rude while he was talking. The font was originally removed sometime after the Reformation and buried under a cairn of stones not too far away, to protect it from being destroyed. It was eventually replaced after being discovered by soldiers, who brought it back to the church (which had been rebuilt by then). I didn't take a photo of it, but I did get a picture of the statue of St Kessog: 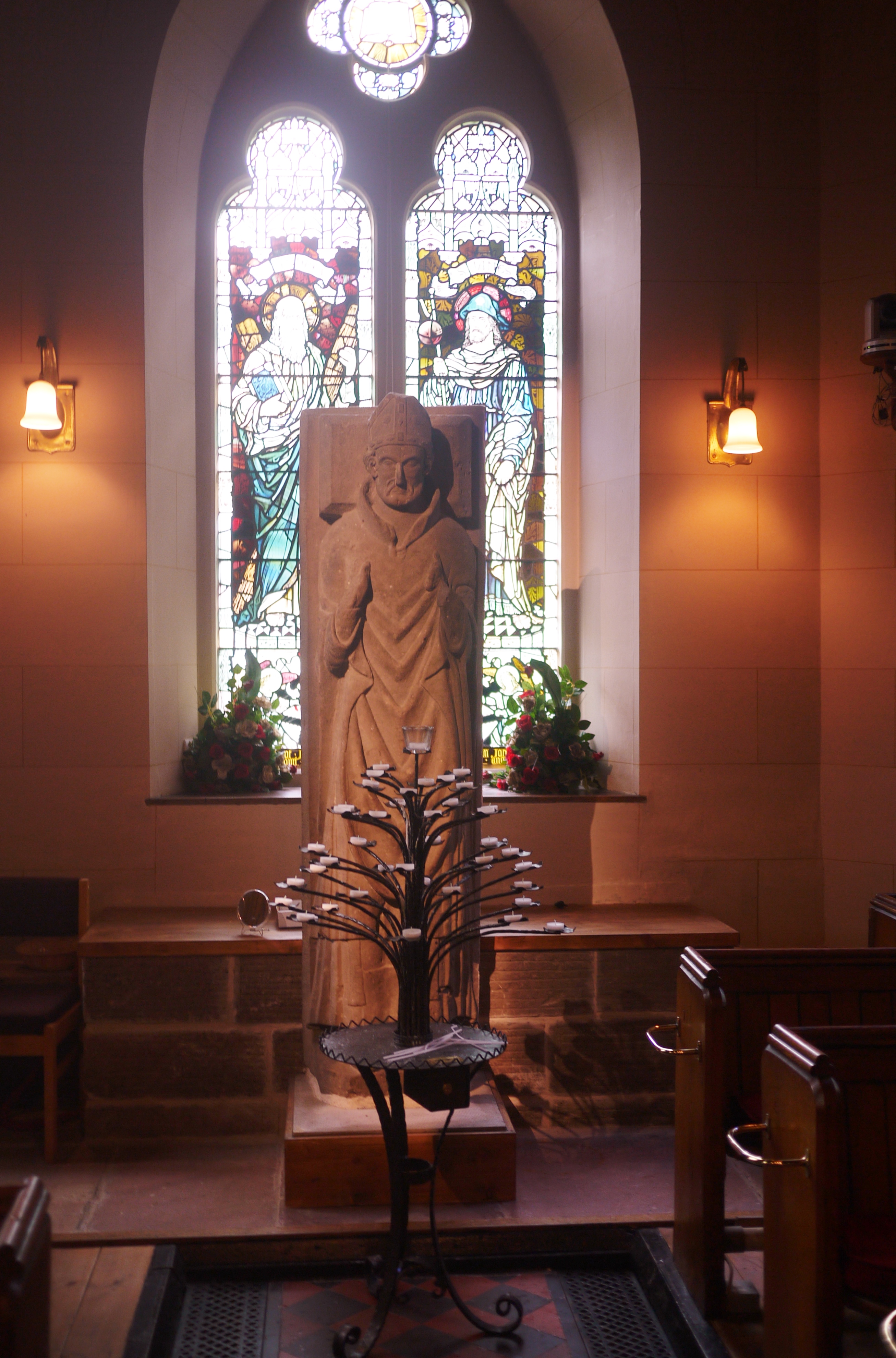 Who seems like a cheery fellow. He's said to have brought Christianity to the area over 1500 years ago, and according to the Wikipedia link he used to be the patron saint of Scotland before St Andrew took over; his name was also used as a battle cry. There's a wee trail behind the church that goes into the history, which starts off with a beautifully carved cross that spells out "coexist," which is a nice touch. And there are some beautiful views of the hills, that are still covered in bluebells at the moment: 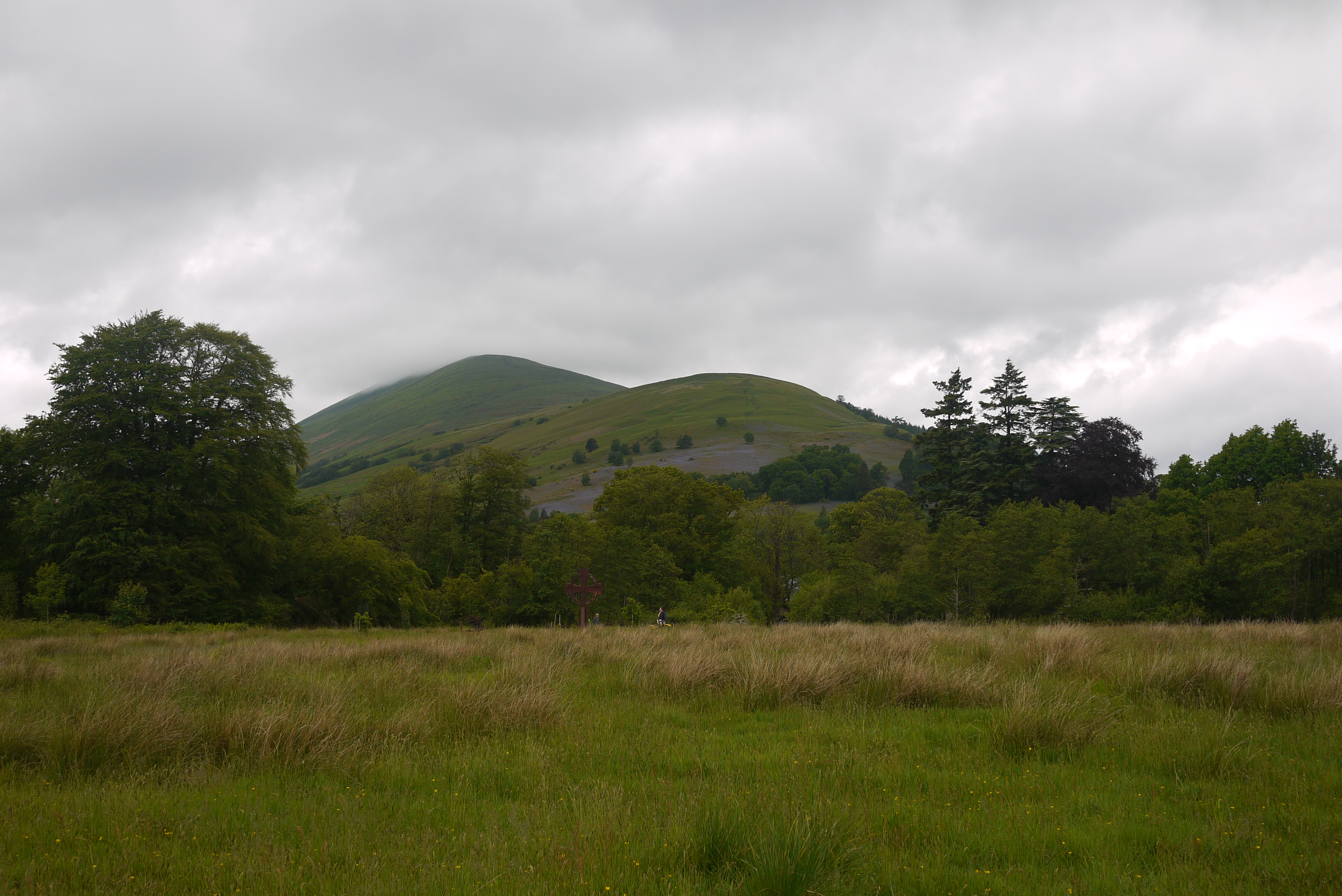 You can kind of see the Celtic cross there as well. There are memorial trees planted all around the edges of the field and the guy we spoke to inside the church said they plant a fruit tree for each Christening they do, so they have an orchard as well, which is a nice touch. Some of memorials were for kids, which is just heartbreaking to see, with the teddy bears and kids' toys at the base of the trunk.

Back in the churchyard there's a Viking hogback - about tenth century in date, I think - lurking amongst the more recent gravestones: 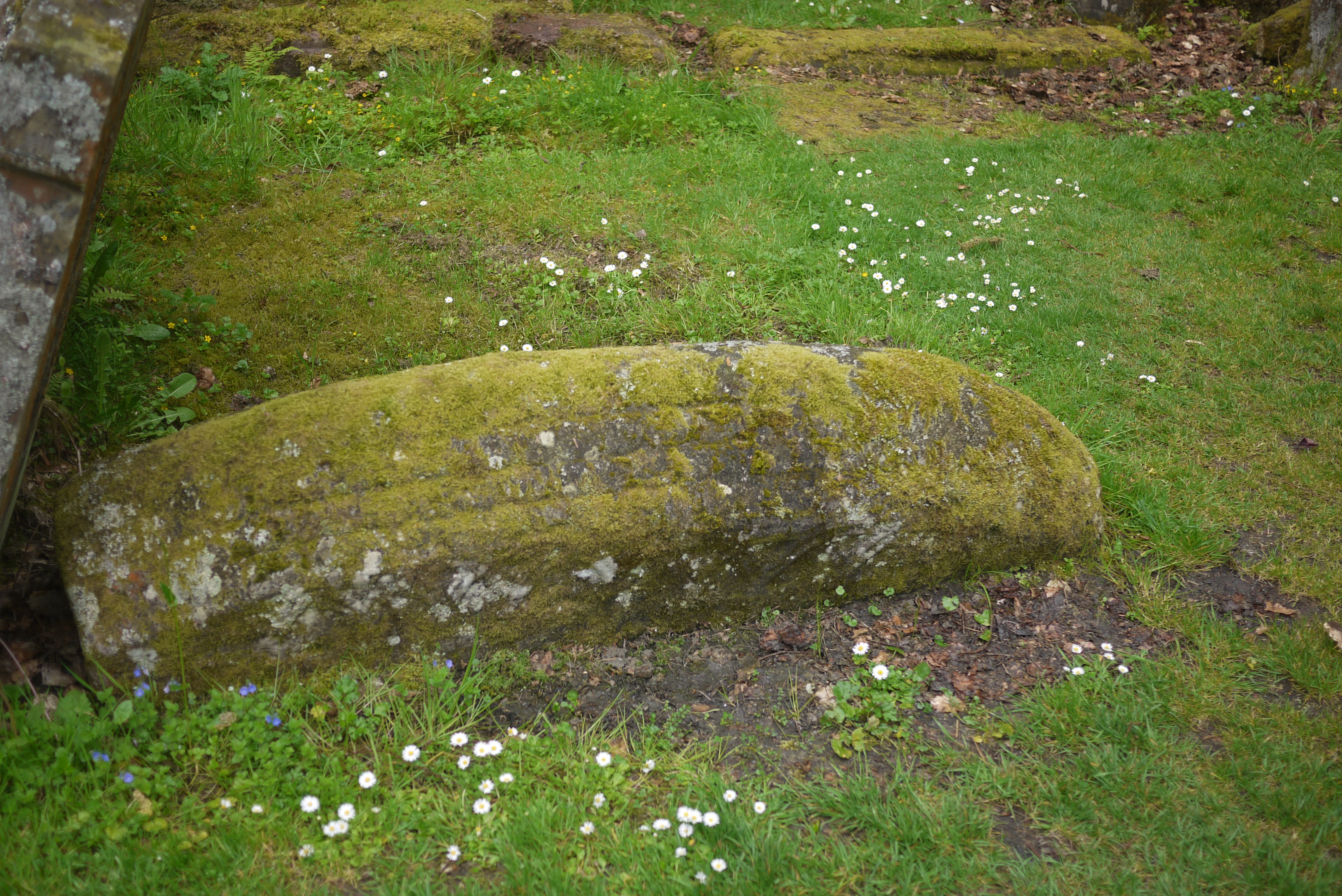 They don't tend to have inscriptions so I'm not sure who it's for, and it seemed smaller than the ones I saw at Govan last year. I don't think I've ever seen one in situ before so maybe it just seemed wee by comparison, but I think it's sunk a bit and weathered a lot, going by the Canmore records.

Down at the shore there are some views of Ben Lomond, which marks the start of the Highland line: 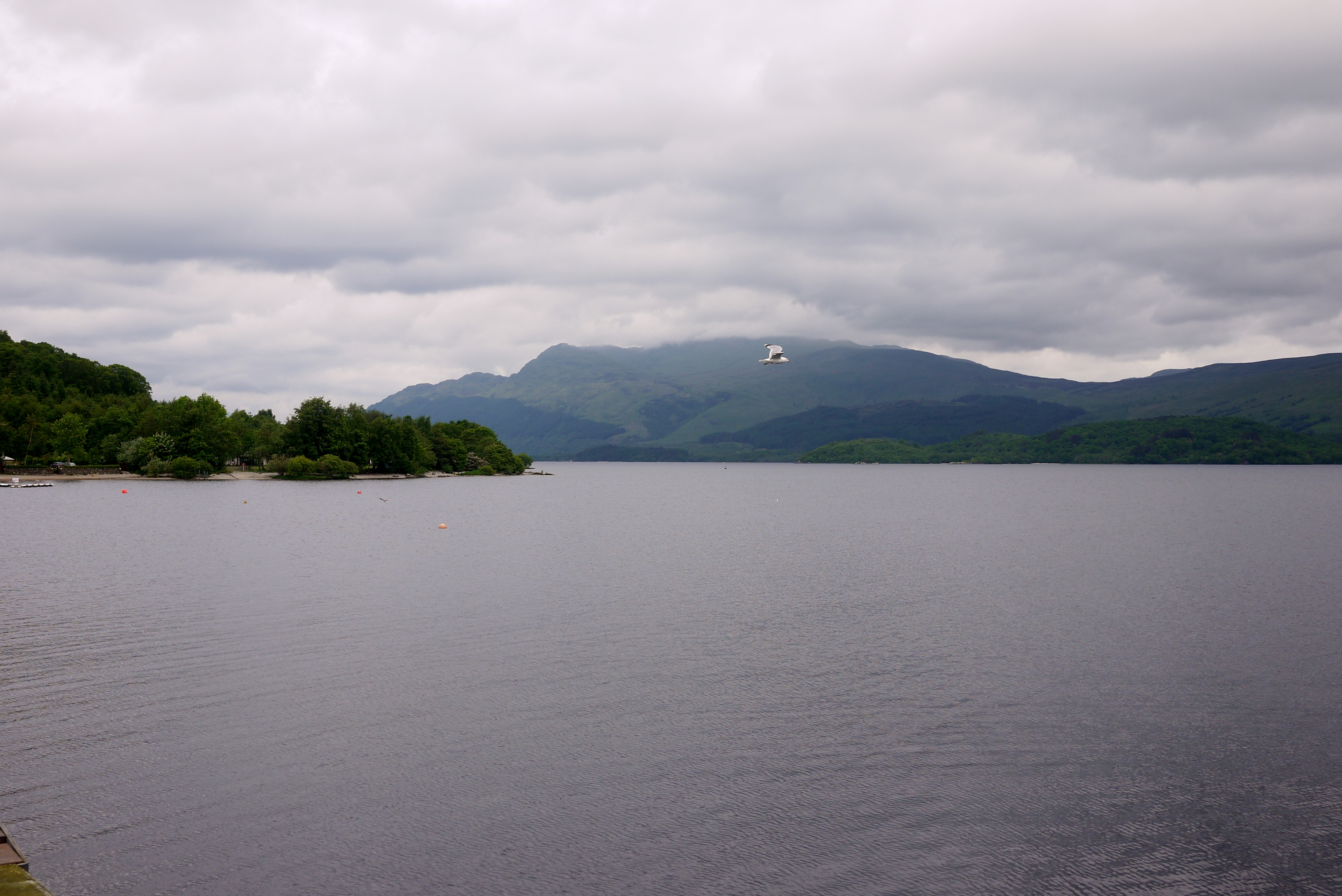 And there's also a nice wee shop by the pier, with possibly the most talkative proprietor EVAR. Enter if ye dare... The shortbread's nice but you might never leave.

The next day we did Bute by car, so we got to see more than just the usual. In spite of the weather, which was a little changeable, it was a fab day, but I'll leave that for the next post. Or possibly two, because I kind of went to town with the camera that day.
Posted by Seren at 16:51 5 comments: