After several attempts I've finally finished a few sets of ogam staves, and seeing as I'm sure you're all really interested in seeing my efforts, I thought I'd share....

The first set I tried to do sometime last year went missing during the move, Mr Seren probably thinking it was an 'art' project that Tom had been doing. Once we moved I began to think about making another set, and seeing as there was plenty of driftwood to choose from at the beach, I toyed with the idea of collecting some to use for the staves.

I decided to wait for a while and try establishing a relationship with the place first, it didn't feel right just taking the wood, so every time we've gone to the beach I've been leaving offerings and libations and doing a bit of meditation (in between running after Tom to save him from launching himself into the waves). The beach is in a very exposed position and takes the full brunt of winds and storms that come our way, so it had a very desolate, stark feel to it, but now I seem to have worked up some sort of contact with the place it's starting to feel a little more welcoming.

I collected some driftwood about mid-April and let it dry thoroughly before trying to etch the ogam into it with a pyrograph (after practicing on lollipop sticks, seeing as I've never used one before). I chose ones that were similar sizes, and were already nice and smooth so I wouldn't have to bother sanding them down or anything, to keep them nice and 'natural'. The etching was fairly easy to do, and for the first set (which I used at Bealltainn), I used long thin pieces and left them fairly plain, which I hoped would make them good for picking out from the bunch rather than throwing and reading the spread: 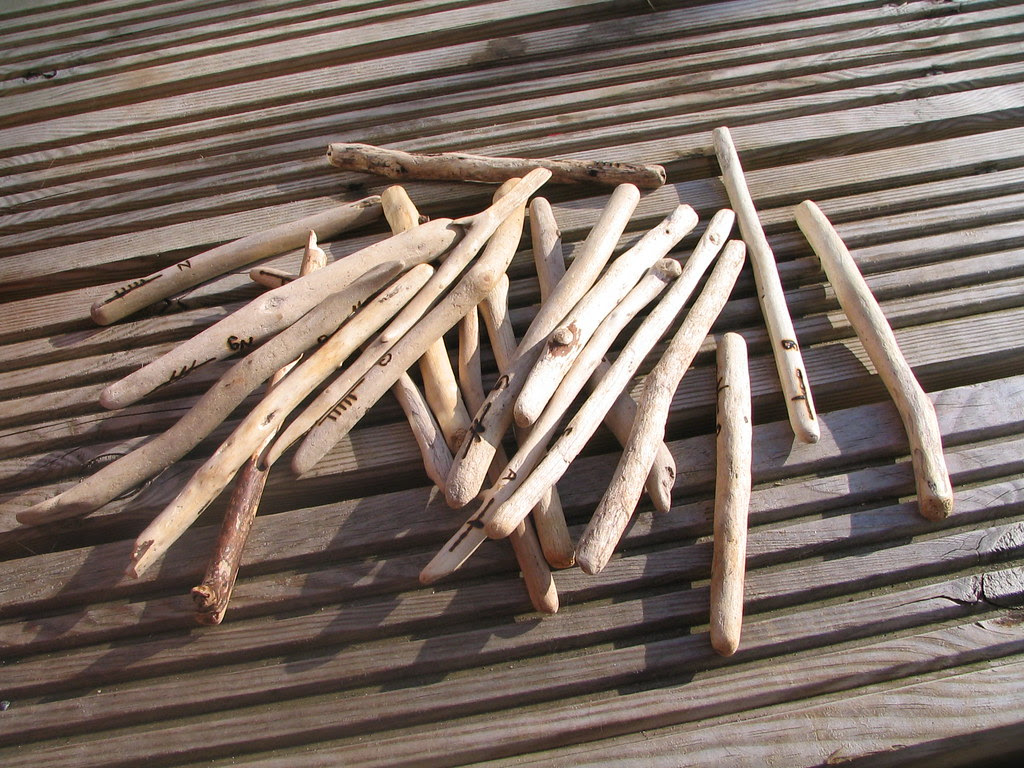 The next set I did, I made with shorter sticks - about 4 inches at the most. They didn't look like much so I decided to paint them according to their colour correspondences in Erynn's book: 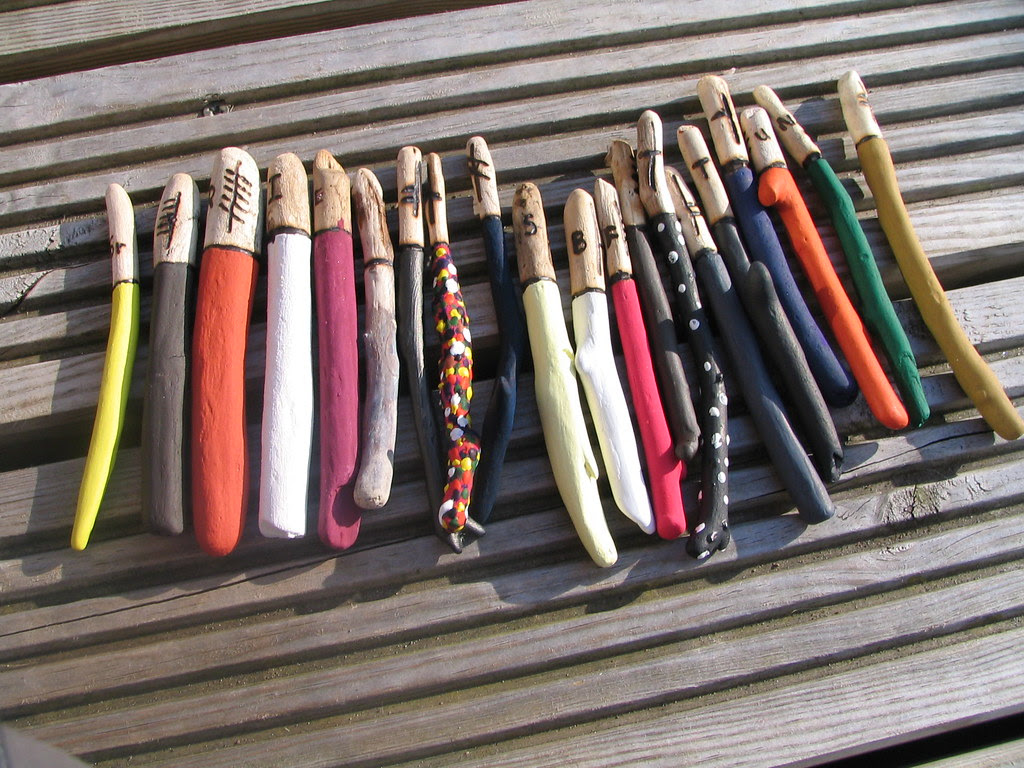 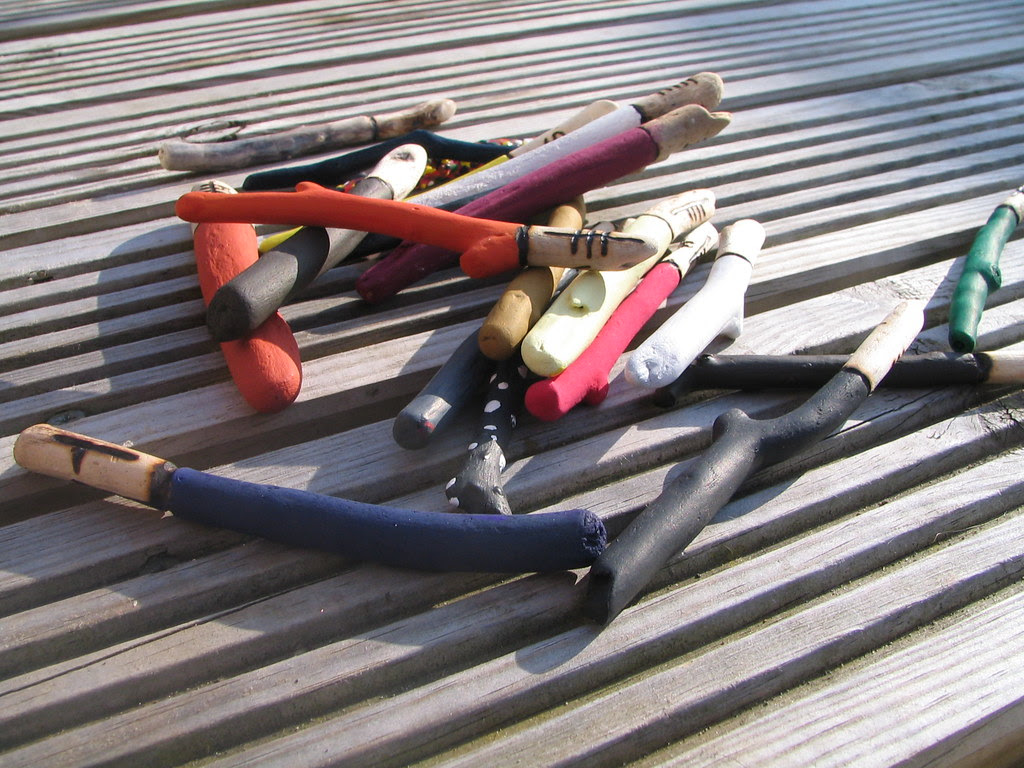 I just used gouache to paint them, and I'm quite pleased with how they've turned out on the whole. The wood's quite soft which makes pyrographing them quite easy, although I'm sure I can do a better job with a bit of practice. It would be nice to try some with decorative designs, but I think that might be beyond my 'artistic' skills...

I'm starting to think that some of them might need tweaking, colour-wise (I tried a 'bruised' effect for h-uath and it looked good until it dried, for a start - I should have waited until it dried to layer it on), before I varnish them or find a good sealant to make sure the paint doesn't rub off because they seem a little delicate just now. I'll use a matt varnish so they shouldn't look too different from how they do now.

I'm hoping that by using them, I'll be able to develop the more experiential, rather than intellectual, side of my practices. Divination is something I'm quite good at generally (for myself, anyway), so it seems like a good avenue of approach for me to start relying on my more intuitive side. We'll just have to see how it goes.

EDIT: I ended up using beeswax as a sealant, which has been very effective. And smells nice.
Posted by Seren at 01:00 No comments: