There were some things I didn't have time to get round to doing before the actual day, but I'm hoping to get them finished in the next couple of weeks before the Old Style Bealltainn, at least.

One of them is the garden, but the weather's against me so there's not a lot I can do about that at the moment. I've managed to do some more planting and mowed the lawn, but that's it. We went south into Ayrshire on Sunday on the one day it wasn't raining as much, and took the kids to the beach to fly a kite - Mr Seren's first ever attempt, as well as Tom and Rosie's. The beach at Saltcoats was beautiful - a huge flat expanse of sand - so it was perfect for running around with the kite, but unfortunately I didn't take the camera with me. Saltcoats seemed to be a lovely town, in a ghostly, half-abandoned kind of way. Years ago in its heyday it was one of the places to go on holiday for the workers in Glasgow and the surrounding area. During the Glasgow Fair every July, when the factories would shut down for two weeks, the workers and their families would descend en masse on the Ayrshire coastal towns like Saltcoats, but the cheap flights abroad and Maggie Thatcher killing off most of the industries in the area put paid to all that and these towns began to fade and wither. In spite of the fact that it was a bank holiday weekend there wasn't much open in the town, so we stopped off for lunch at a Garden Centre on the main road on our way back home and had a bite to eat at the cafe and a nose around the shop.

I resisted the tasteful giant gnomes (and was disappointed at the lack of tasteful giant mushrooms), but picked up a raspberry bush to go with the blueberry I've already got, a couple of junipers, a poppy, and some evergreen type bushes to fill in a few gaps, along with some red chipped glass pieces with an idea of doing something with them, but I'm not sure what yet...It was still sunny when we got home, so I set about mowing and did a bit of weeding and got most of the plants in before the rain came. One of the junipers and the poppy went around the puddle pond, and the raspberry went wherever it would fit, and I did some weeding and managed to break up the soil a bit more and dug some organic plant food and compost into it; hopefully that will condition the soil a bit, it really needs it. I still have some planting to do and I need to finish the lawn, and I'm contemplating buying some strawberries to plant as well.

For my celebrations at Là Fhèill Brìghde I made a devotional sort of plaque out of modelling clay, with a snake incised on it, which I then painted and varnished. I was intending to make one for Bealltainn but I've yet to be inspired so I'm still thinking about it for now. Since Christmas I've been making some seasonal murals with the kids - nature-themed, so not overtly religious (in respect for Mr Seren), but containing elements that are significant to me, that I can talk about with the kids. Well, the last two have been, the ones we did in December were paper snowflakes decorated with glitter (which is when I hit idea of doing them for each season as something I could do with the kids). For Là Fhèill Brìghde we did a 'spring flower' theme. Rosie and I did daffodils, and Rosie did dandelions (for Bride), and Tom..."made purple": 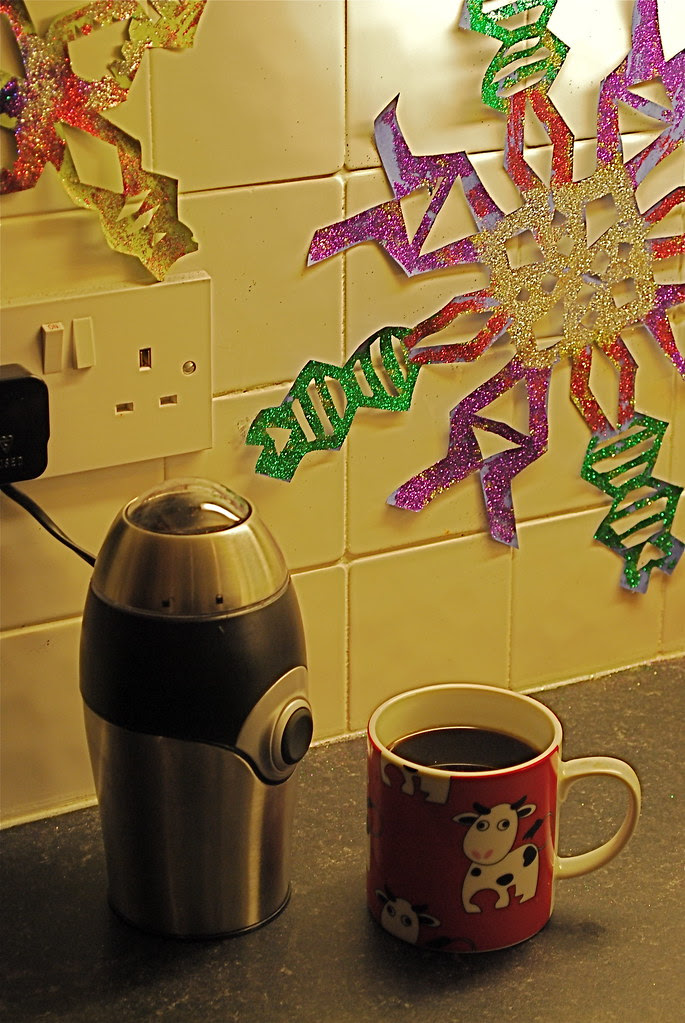 (Some of the snowflakes providing a backdrop for my inaugural use of the coffee grinder I got for Christmas. Sad, I know).

I was feeling a little uninspired for a summery theme until we did some painting yesterday and Tom started doing 'butterflies' by painting splodges onto the paper and then folding it in half. So I decided butterflies were very summery and we set to it. I drew the butterfly shapes, covered them in glue and then the kids decorated them with glitter, pom poms and pipe cleaners. Tom tried a feather butterfly, too. And then they covered the background with the flowery paper to tasteful effect...Rosie helped with the Otherworldly grass and fabric flowers that were going spare while Tom mostly ran around in circles being shrill because it was so exciting!!!!

The result is very Tasteful, I think you'll agree:

But it certainly brightens up the place. I've been putting the pictures up in the kitchen, against the wall that can be seen from the front door and hallway, so it gives a cheery view when you walk in. It's a bit of a dead space otherwise, that's home to the fruit bowl and generally any crap that doesn't have a home for the minute, so it's a good excuse to keep things clear.

Continuing the crafty theme, I've also made a hob house as a friend suggested...How better to give good hospitality, than give a proper place, specially for them? I've been looking for a hob house for a while (after seeing Judith's) but it never occurred to me to make one until now, so while the kids were doing play-doh the other day, I decided to join in with the modelling clay; it's handy having kids sometimes, the tree shaped cutter and the butterfly shape that came with the play-doh factory were put to good use: 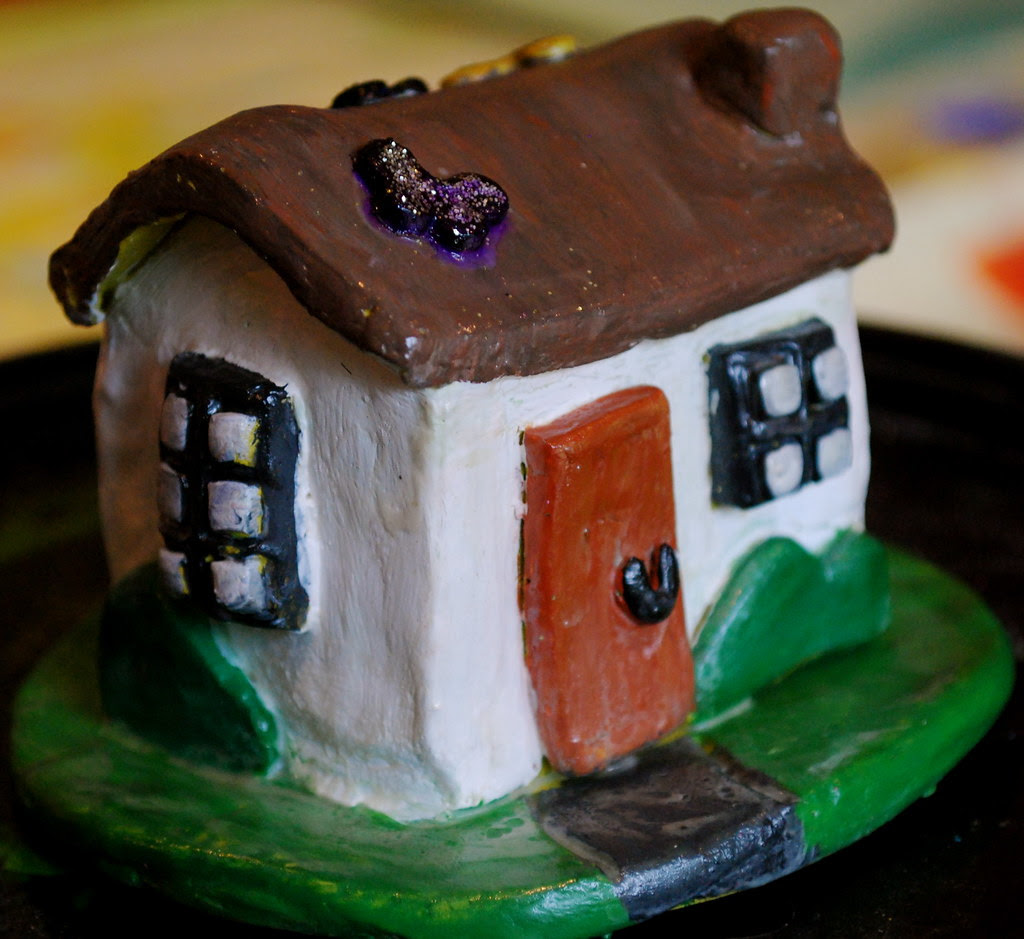 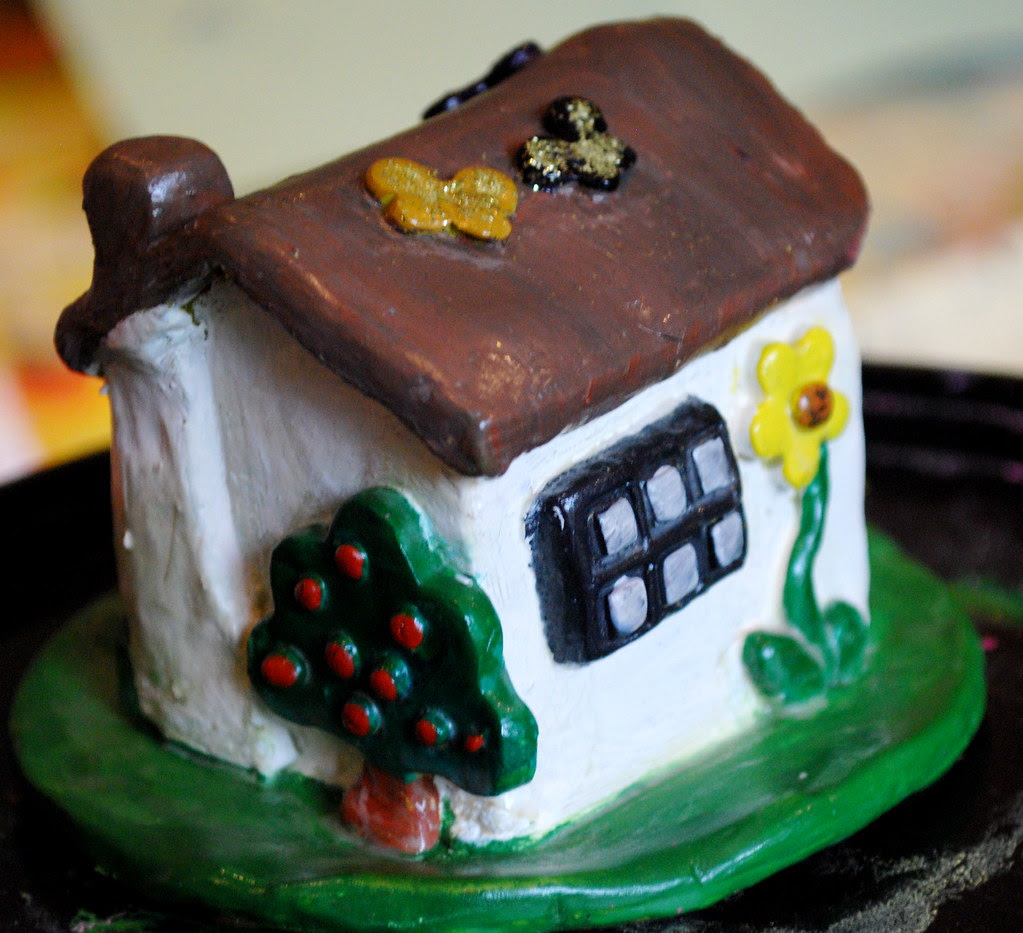 Painting it gave me something to do while Mr Seren was away dahn sahf, and I have to admit I'm quite pleased (surprised) with how it turned out, although it's a shame the butterfly 'bled' as I varnished. I thought about putting it on the kitchen windowsill but I think it would get damaged there, so now it's dried out it's taken pride of place on my shelf where it won't get poked and prodded at and hopefully, with some regular offerings, it will make a good home for somebody and then maybe the remote control will stop going missing for no apparent reason, and things will stay where I left them...Thinking about it I probably should have moulded some sort of dish into it somewhere, so I could pour some milk into it as an offering, but maybe not; then I'd have to keep disturbing it to keep it clean and my honoured guest probably wouldn't appreciate that. I shall have to find something appropriate to put next to it for that, instead, but I'm not sure what yet. I'll see how it goes.
Posted by Seren at 01:41 No comments: Links to this post