Midsummer's come and gone and with it, so has the sun, it seems. But we're still getting some pretty impressive sunsets. See? 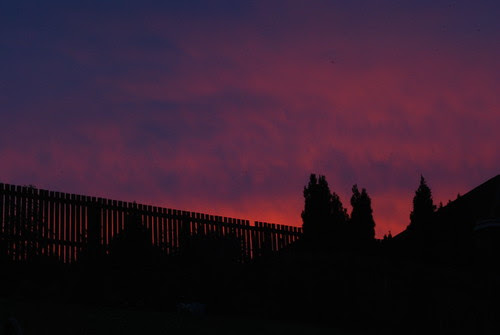 Very dramatic. June was a very dry month for us, so the return of the rain is good for the garden, at least. Everything's coming along in leaps and bounds now.

For midsummer, I took the kids to the beach for a picnic with the intention of making some offerings - plans had to slightly change though, because we ran into our neighbours and they joined us for the afternoon, so offerings were somewhat surreptitiously done as we left, after a lovely afternoon in good company instead.  It was quite a momentous afternoon, too - Mungo was brave and attempted a swim in the sea. Although I don't think he's in any hurry to try it again.

After starting Margaret Fay Shaw's Folk Songs and Folk-lore of South Uist a while ago, I found a recipe for a proper festival strùthan - a traditional version using barley, and a more modern version using flour. It was perfect timing, so I decided to try out the flour version, in the evening, and had some success with it. Sort of? I made it as thin as I possibly could by hand, but it rose more than I was expecting as it baked in the oven. It was also difficult to gauge how doughy the caudle should be, so that bit I had to wing and possible ended up with something a bit too paste-y rather than doughy. It kind of ended up rock solid and brick-like once the strùthan cooled. I tried some fresh from the oven and it was tasty, but chewy, but it definitely needed to be thinner - at least half as thin as it turned out. I would guess it would be quite solid but brittle then, once it cooled.

This is how it looked: 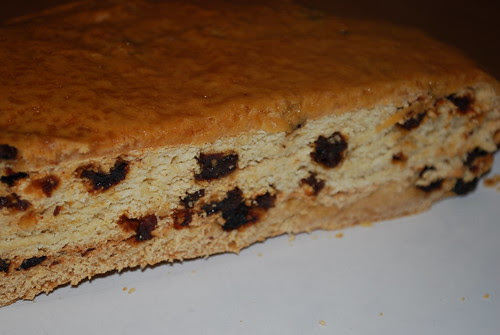 And this is the recipe, based on Shaw's description:

Mix the ingredients together, using enough milk to make a pliable dough. Shape the dough into a flat round and bake on a girdle, or 'not too hot' oven. Turn about half way through cooking to make sure it bakes evenly.

Mix the ingredients together, using enough flour to make a 'dough' that will stick to the strùthan. Cover the strùthan and return to the oven until ready.


If I'd got it the right thickness, then I imagine it would have been quite tasty, even after it had cooled. I saved some for the kids to have the next day, but when I tried to cut it, I couldn't even make a dent in it. I decided to bin it - seeing as it was basically inedible, I didn't want to leave it as an offering, but the rest of it that I'd left out fresh from the oven seemed to have been well received, along with some Orkney beer.

I didn't do much else for the day, just kept it quiet and simple (and nursed a mild case of sunburn from the beach). And somehow it's mid-July already, how did that happen?
Posted by Seren at 00:42 No comments: