Where did April go?

Time seems to be hurtling onwards and Spring has only just decided to stick around for more than a few days at a time, as of about three weeks ago (going by the length of time since I turned the heating off in the house...). This year seems to be going so quickly so it seems odd to be thinking about Summer already, but all the signs are here – the longer days, the stronger sun, the dawn chorus and gangs of corvids of various kinds hanging around and looking for mischief (our postman carries dog biscuits with him for when he has to knock on the door and deal with potentially suspicious dogs – or our dog Mungo, who's a hugger and loves everyone whether they love him or not – and when he knocked on our door the other day he was extremely freaked out that first one crow and then a whole bunch of them had been following him down the road for over an hour. Not flitting from tree to tree every now and then. Hopping down the street behind him. He eventually threw a few dog biscuits at them and legged it).

The landscape is awash in the yellows of dandelions, cowslips, primrose and gorse: 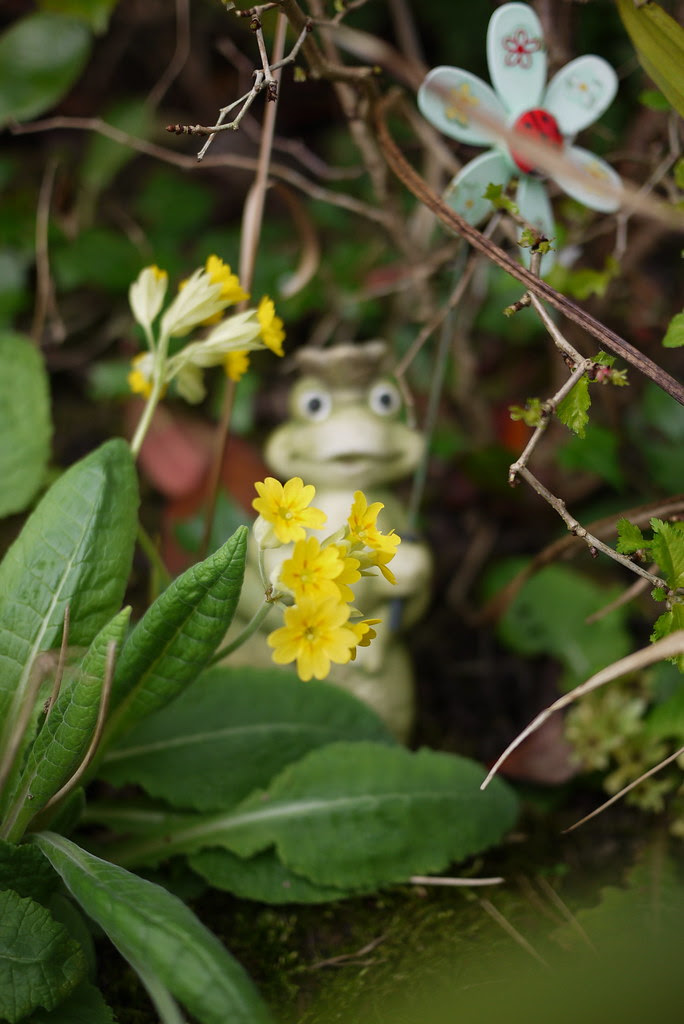 The trees are unfurling their leaves: 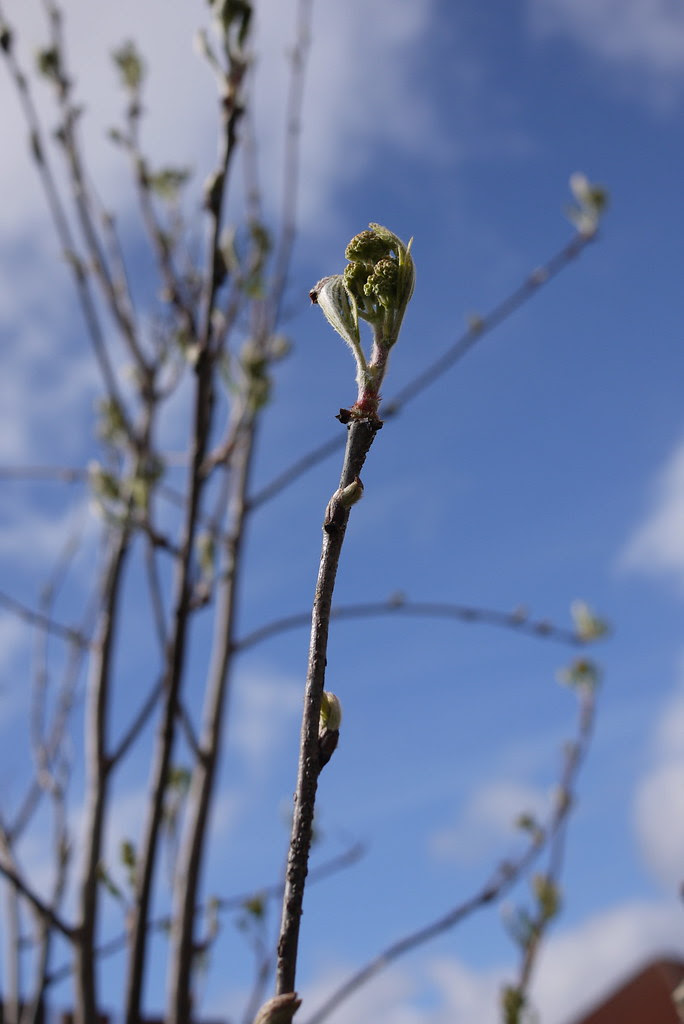 And I've finally been out in the garden to see what survived, tidy it all up, and start some veg off. It's been good to feel the warm sun on my skin, while my fingers have been stuck into the cold soil...and it's long overdue but I've finally got to sowing the seeds of the coming harvest.

I wanted to get everything in before Bealltainn, so now I have some peas, courgettes, carrots and leeks on the go in the vegetable patch, and I'm attempting some onions but the sets I bought last year have dried out and I don't think they'll do anything. I'll get some more when I can but as it is a strawberry bush has taken over most of the containers I used for onions last year, so I won't have much space.

It looks like the back of my flowerbed has been taken over by raspberry or bramble suckers – I'm not sure which yet, but I'm hoping for raspberry. The blueberry and blackcurrant survived the cold snap as well so hopefully along with the strawberry that's attempting world domination we'll get some decent crops this year.

With the garden all done, then came Bealltainn. At the weekend I encouraged the kids to do some pictures based on a summer theme (with the idea of using one as a background for the fish tank, which has taken up the place where I used to put our murals) but things didn't quite go to plan...We started with a joint effort but Rosie decided to add in a giraffe and then Tom put in a paint monster doing battle with the giraffe, which all in all wasn't quite the theme or message I was looking for...Rosie then decided the fish would rather have a butterfly to keep them company, but it didn't quite turn out as she wanted and she didn't want to finish it. In the end, we did a collage with some colourful paper for the background, and some fabric butterflies and some stickers and gold sequins stuck randomly about the place. It was declared "actually quite good" so we've gone with that one.

For the day (or evening) I decided to stick to pretty much the same formula as usual, although instead of bannocks and caudle I bent the idea a little and made a honey and apricot cake, with some chocolate pudding. I was going to decorate the cake with some leftover fondant in the cupboard, but it turned out it had gone solid. Instead, I just used butter icing and some decorations – flowers and gold balls, which along with the honey and apricots were supposed to represent the fertility and prosperity of the season: 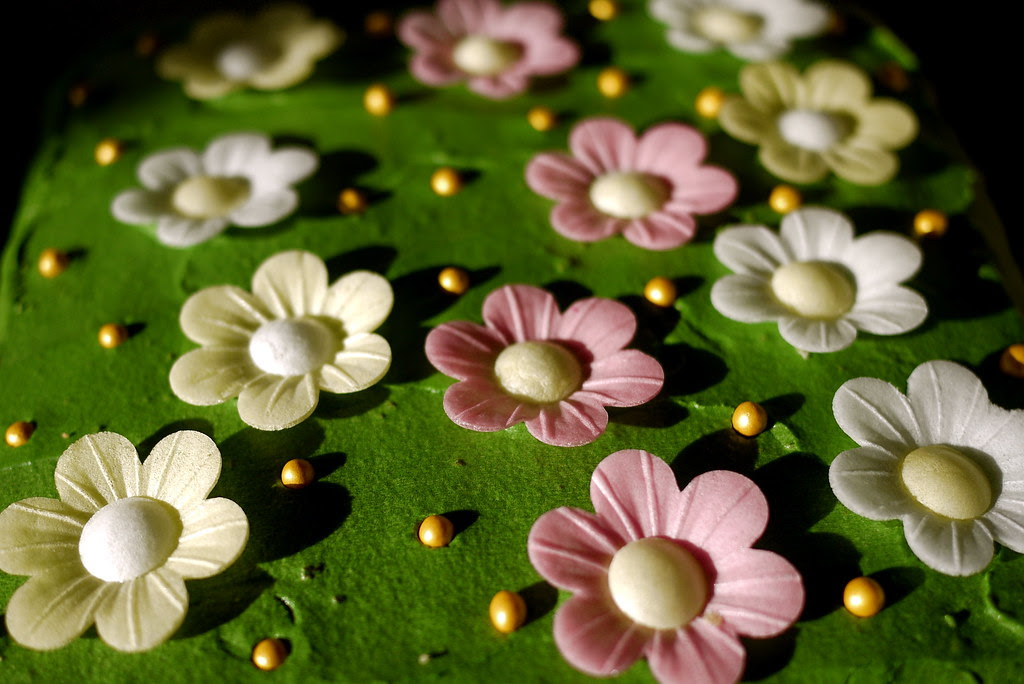 I blessed the cake and the caudle as I made them and managed to get the cake out of the pan in one piece (a good sign, or at least not a bad one). And around that I spent the day giving the house a final Spring clean, then set about preparing the feast. I was going to churn some butter with the kids but I could only get a small pot of cream from the shops and it didn't seem worth it, so I just whipped it to go with pudding instead. I did some breaded chicken for dinner (not exactly traditional, but slightly more so than leftover red lentil dahl, right?) and set the best bits out as opening offerings.

The house was invaded by Tom's friends after school so all the preparations we left to me, really. But with the friends finally turfed out and the feasting beginning, the kids were thoroughly appreciative of the fact that it was a "special day," and Rosie had picked some dandelions to bring the summer in and we put them on the shrine for decoration, and they both brought some more in the next day as well.

After the kids had gone to bed I went out to collect some rowan. I had the sense that there was a particular tree I should collect it from, and not the one in the garden as I did last year, so after I'd done the main part of my devotions and rekindled the hearth, I took some cake as an offering for the tree and went for a walk. I used a bit to make a charm and the rest has been put away for safe keeping.

Some more offerings were made, with a part of the cake going out for the spirits, based on the practice mentioned by Thomas Pennant and Carmichael. I've done this for several years now and some years I've adapted it, others I've done it as it's been recorded (per Carmichael):

On the one hand I think adapting to my own circumstances would work because it's directly relevant to me and mine. On the other, it's tradishunal. And as I know I'm from farming stock I feel reading from the script, as it were, is a way of respecting and remembering my ancestors, and what they went through each year. Sometimes life is precarious... Ultimately it still works as a metaphor, to protect myself and my family from the kind of threats that are wily and often unseen or at least unpredictable. This year I did it the tradishunal way and comparing it to previous experiences it didn't necessarily feel any less right or wrong than other ways I've tried it. I think perhaps it felt more right than not..but with the many things my family has been through in the past year or so, perhaps tradishun is the one constant I can rely on and take comfort in. In the face of uncertainty, the predictable gives comfort.

Maybe so. Maybe that's why doing the same thing over and over, year in year out, never gets boring for me.

Saining was done too, and while I was doing the kitchen Mungo was going mental at the back door; he's not usually a very vocal dog but he was very clear that whatever was out there wasn't coming in, thanks. I paid special attention to the threshold after that. I didn't get the sense of anything malevolent out there but I figured it's best not to take chances.

The next morning I made further offerings and looked out for any omens that might be about; a crow flying sunwise, so hopefully a good one. Either way, I hope so. And I hope you had a good one too.
Posted by Seren at 23:05 3 comments: