Winds are averaging around 70mph at the moment, apparently. So there hasn't been any sowing today, as I'd hoped, because I was hoping to be able to do it outside and avoid having to acclimatise any indoor seedlings before putting them out. Not gonna happen in this weather...

One thing I forgot to mention in my rundown of celebrations is the saining. I know some people burn juniper, but for me there are potential problems with practicalities like upsetting the kids' lungs and the smoke alarms, so I've never tried it. Water seems to be the more common option for generally festive occasions, so I feel more comfortable with it and it's less obtrusive as far as everyone else in the house is concerned. The options are silvering the water or using spittle (and yes, I'm aware of the practice of using stale urine, but I'm not sure if that's a good idea with cats and dogs, I'd rather not encourage them to pee everywhere. Plus I think my husband would probably question the future of our marriage if he found me sprinkling urine over the doors and thresholds...), and while I've used both silver and spittle in the past, I tend to prefer silver.

Silver pennies are common for use in this kind of thing, especially sixpences in the old days (before decimalisation in 1971), but these days I don't think there's really any silver in pennies at all. As I was cleaning out a cupboard, though, I found a jar of old pennies that I rescued from my grandparents house as everything was being cleared out after my gran died. My grandparents kept a lot of things of 'value' and eventually mum and my aunt gave up trying to find a good home for things and just decided to bin or send stuff to a charity shop. I didn't want to let the jar of coins go, though. That kind of thing fascinates me, and there was a war medal in there from the First World War, as well as coins from all over the world (including Nazi Germany). Some of the coins go back as far as the early eighteenth century, but most are mid-late Victorian, and some of them have been drilled so they can be worn as charms. One or two of them are sixpences, so I picked the most battered and beaten for silvering the last of the water I collected at Bealltainn: 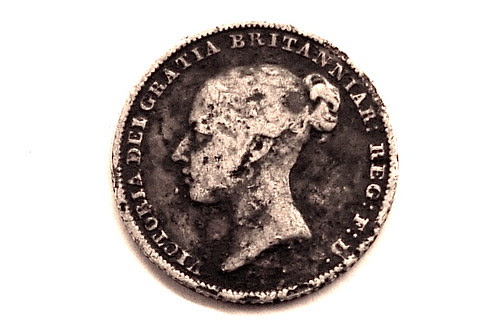 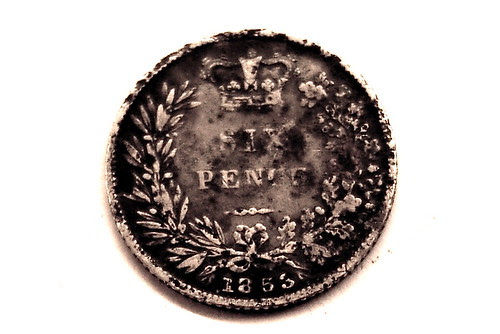 I figured that made it crooked enough. And I liked the idea of using something that connected with some of my ancestors, too. It seems to have worked well so I think I'll be making it a regular thing in my practices for the future.

We still haven't got around to starting our Spring picture. I have a kind of flu hangover and it's still kicking my arse a bit.

Also: A number of people have mentioned that they've been unable to post comments on the blog because of browser issues. I've changed the comments so they open up on a new page, instead of below the post, which should make commenting possible now if you've had problems in the past.
Posted by Seren at 21:43 3 comments: Links to this post