A very happy Lùnastal to you all!

I'll be waiting for my blueberries to ripen in the garden before I start my own celebrations, like I usually do, and it looks like they'll be at least another week yet. In the meantime I've been doing a few bits and pieces in preparation - some pictures with the kids, along with planning for things the kids and I can do together - making butter, some shortbread, cranachan and bannocks, and having a proper go at making some Lùnastal crowdie this time, and thinking of playing some games we can all play (nothing too physical for me, though. Hmph).

Anyway, during the summer holidays we were planning a few outings at least, with a holiday up in the far north of Scotland, and a trip down to England to see my family. An unexpected tax bill has pretty much scuppered those ideas, but seeing as my husband got some camping gear for his birthday we decided to go on a short camping trip this weekend - just an over night stay, but that suited me fine considering we were kind of experimenting with how my back would tolerate a long journey and sleeping in a tent (the answer being, the tent was fine, but not so happy with being stuck in a car).

We were originally thinking of heading to Perthshire so I could indulge myself with a trip to Tigh nam Bodach (perhaps my husband thought I might finally shut up about it...); but with the kids in tow and it being situated in a fairly remote location, and the uncertain back factor, a trek to those parts seemed doomed to wailing from tired children, or me. Instead we decided to head to Glen Coe, with the tent, the kids and the dogs in tow, and so we set off on Saturday morning in glorious sunshine.

The roads were busy through Loch Lomond, but the traffic thinned out considerably once we turned off onto the road to Glen Coe and we had a good run. The route takes you through Rannoch Moor - which is just beautiful. Empty though the roads were, it seemed it was mainly because everyone had stopped in the few parking places available. We couldn't stop and take a good look around, so I had to take a few snaps out of the window along the way: 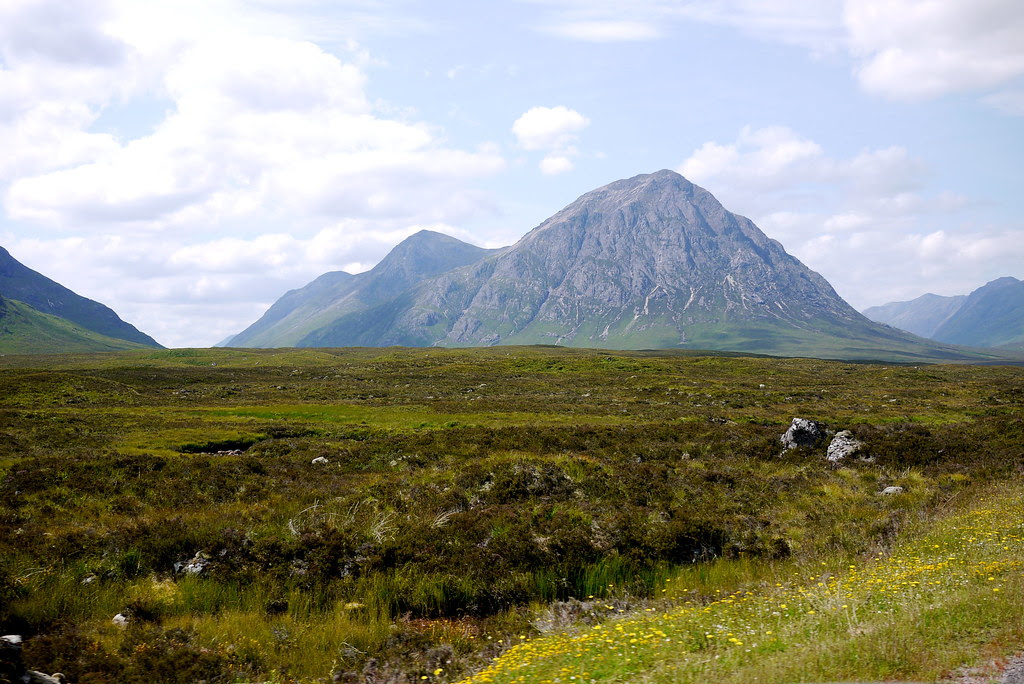 The Rannoch Moor is the start of the Highlands 'proper' - technically I think the Highland Line starts at Ben Lomond, but the sign welcoming you to the Highlands is situated right as you enter the moor. Here's another view: 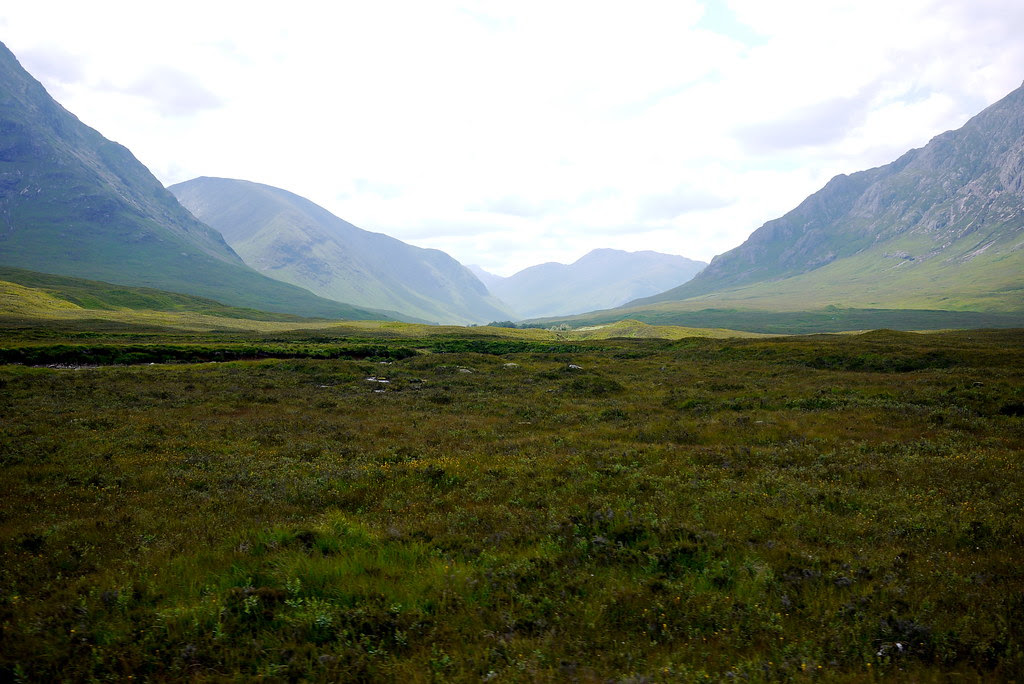 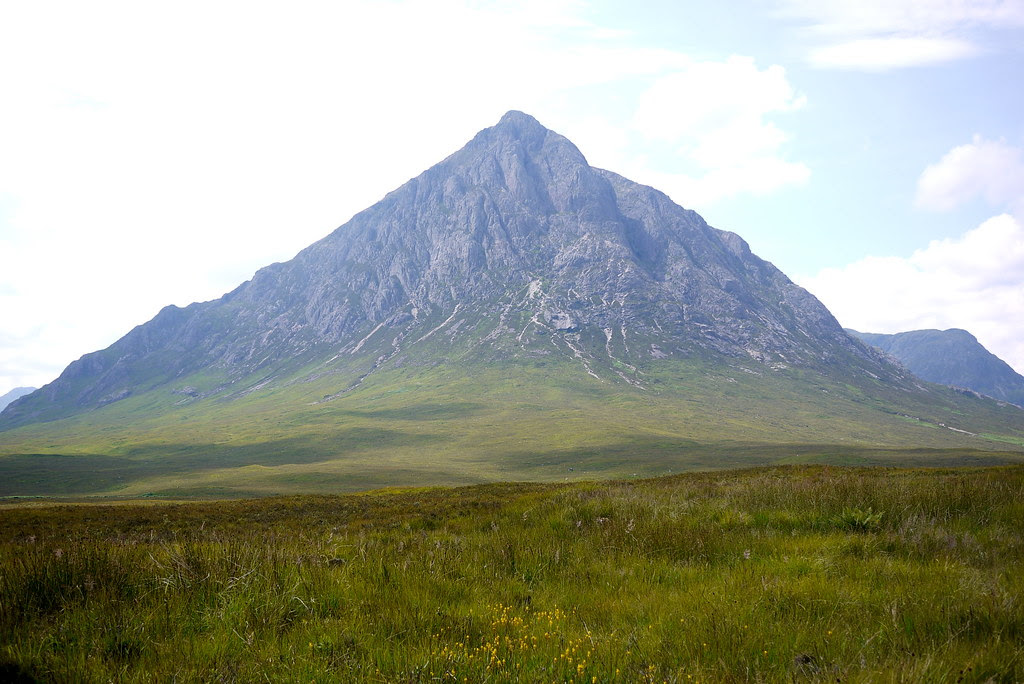 As you get to the end of the moor you enter into Glen Coe, and the landscape closes in, with just a road winding through the mountains: 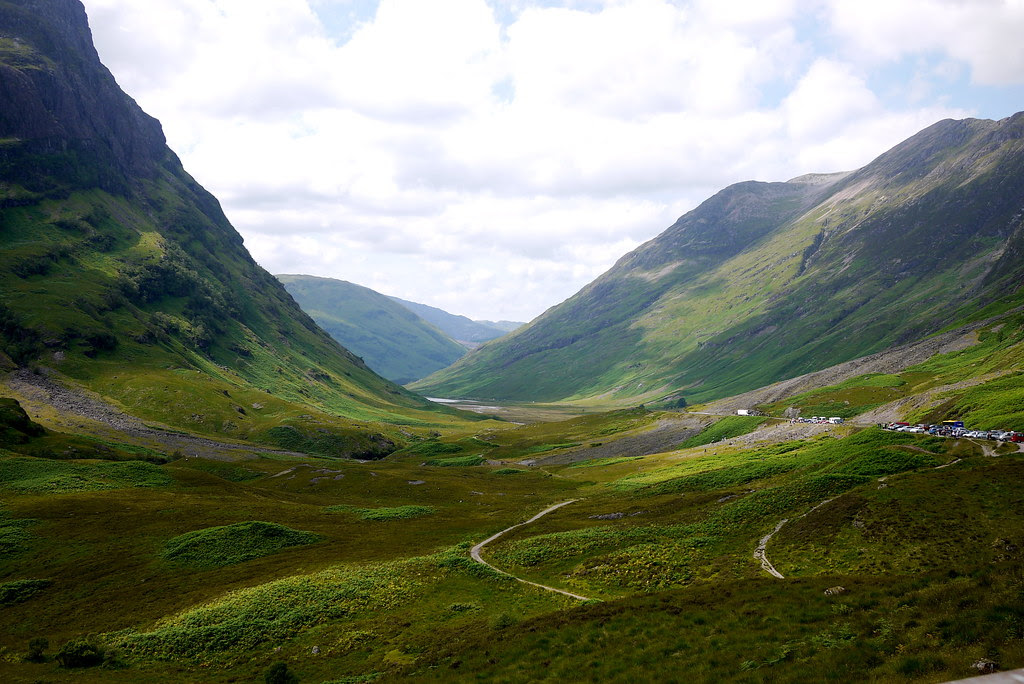 Some very fine mountains, too: 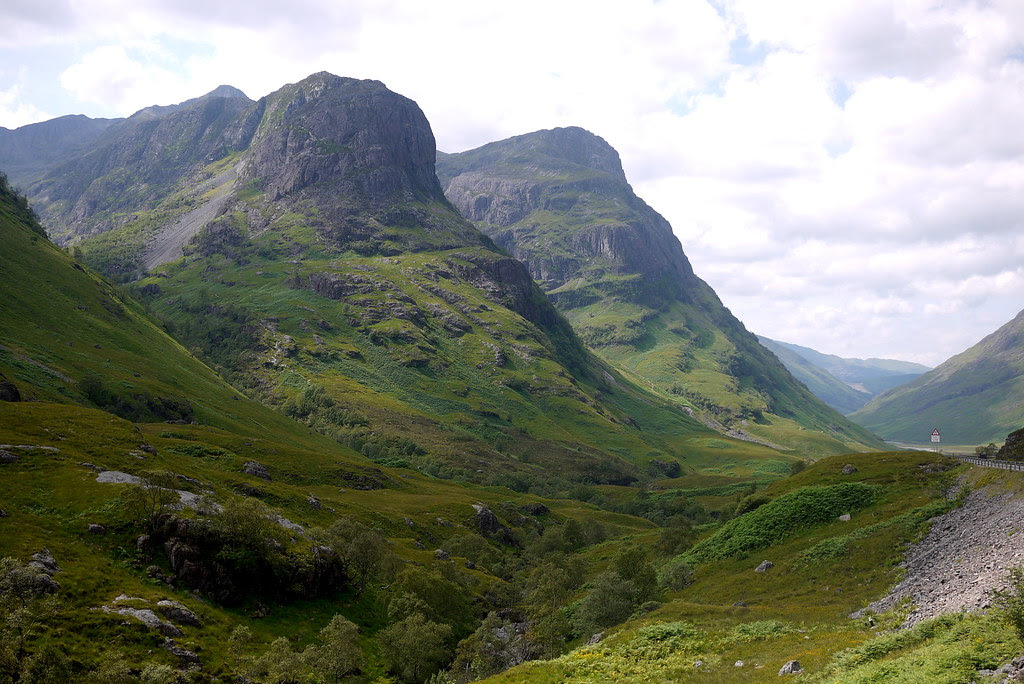 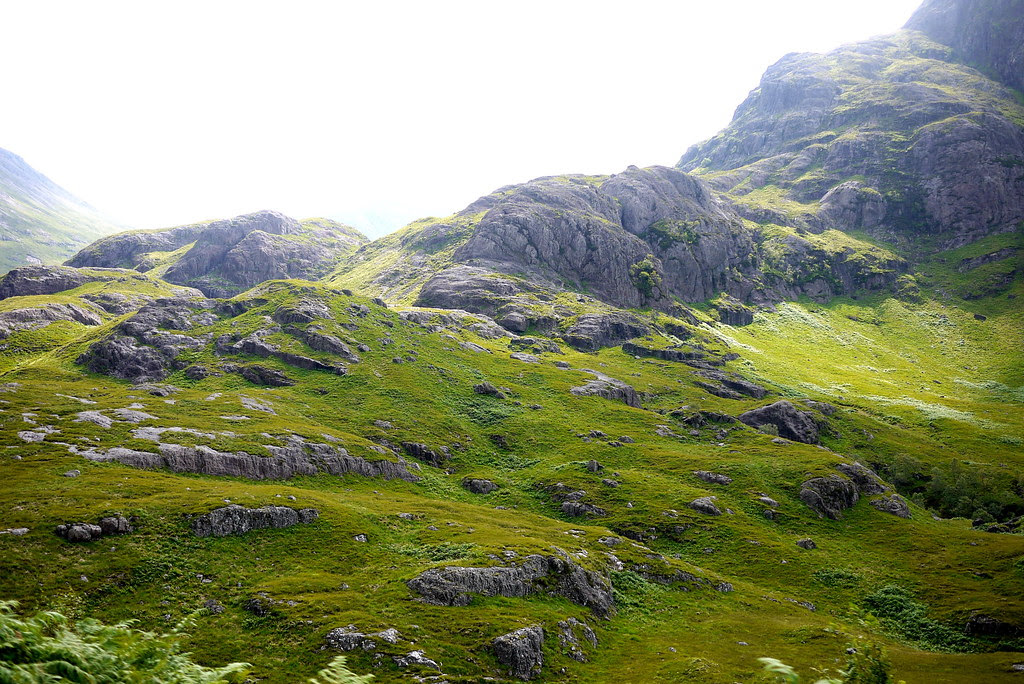 We pitched our tent at the campsite next to the Glen Coe visitor centre, and headed off to find a park for the kids to run off some steam before dinner and then bedtime. My husband managed to rip his only pair of shorts while he put the tent up, so there was a stop to find a new pair of trousers, too...

In the evening, I walked the dogs along an old path that eventually led into Glen Coe village; along the way I stumbled across the remains of an old blackhouse (and kicked myself for not having my camera). According to the information board, nine trees were planted around the house to commemorate the nine people were killed there during the Glen Coe massacre, but legend has it that there was a tenth - a small boy, whose terrified screams made a soldier pause and think twice about killing the poor child in cold blood. The soldier decided he couldn't bring himself to do it, so cut one of the boy's fingers off instead, and wiped the blood on his sword to convince his superior the boy was dead. Years later, the old soldier returned to the glen and stopped for a drink at the pub. He got drunk and began rambling on to the bar man about his regrets at the terrible things he'd done during the massacre, but for the one life he saved - the wee boy, whose finger he'd cut off. The bar man listened intently, and then, when the old soldier had finished, he held up a hand and showed a finger was missing.

I wonder how many stories like that there are.

After a very uncomfortable night, thanks to a slowly deflating mattress and being punched in the face twice by Rosie's nocturnal fidgeting, we got up bright and early and had our breakfast, packed up, and began heading home. The weather had taken a turn for the worse during the night, so it was mostly damp and dismal today. We took a detour along the coastal route, though, taking in Oban and stopping at a beach near Dunollie castle, so the dogs could get some exercise: 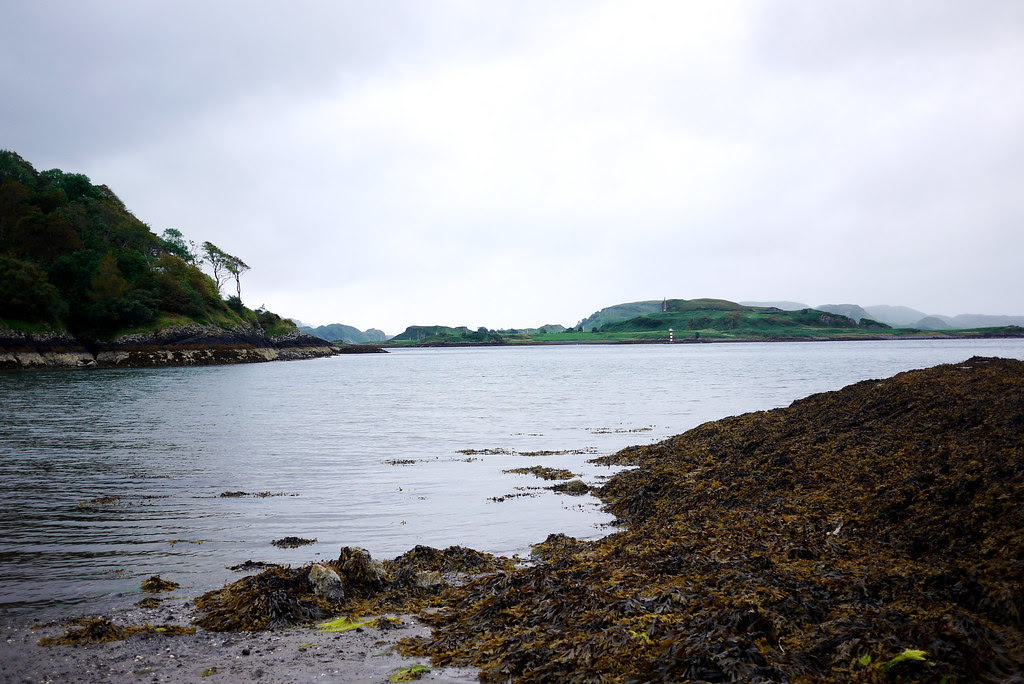 And then we headed to the Isle of Seil. We went there a couple of years ago, but that time we only went over the bridge and had a brief stop before heading back. This is the bridge (taken on our last trip when the weather was only a little better than this time): 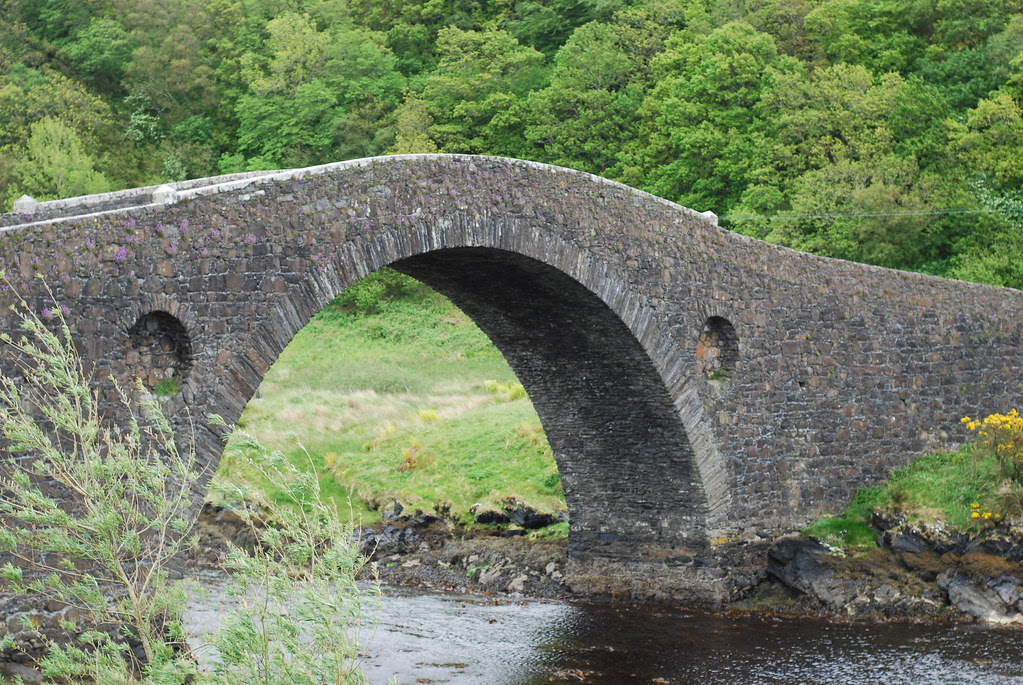 The Atlantic Bridge in fact - the only bridge to cross the Atlantic Ocean. As you can see, it's not very wide at this point! Seil itself is a beautiful island - the dismal weather kind of made it even more so, in a way. The low cloud gave it an ethereal feel. On our travels we saw another abandoned house - a little like the one I saw the day before, but I think this one might be a little more recent: 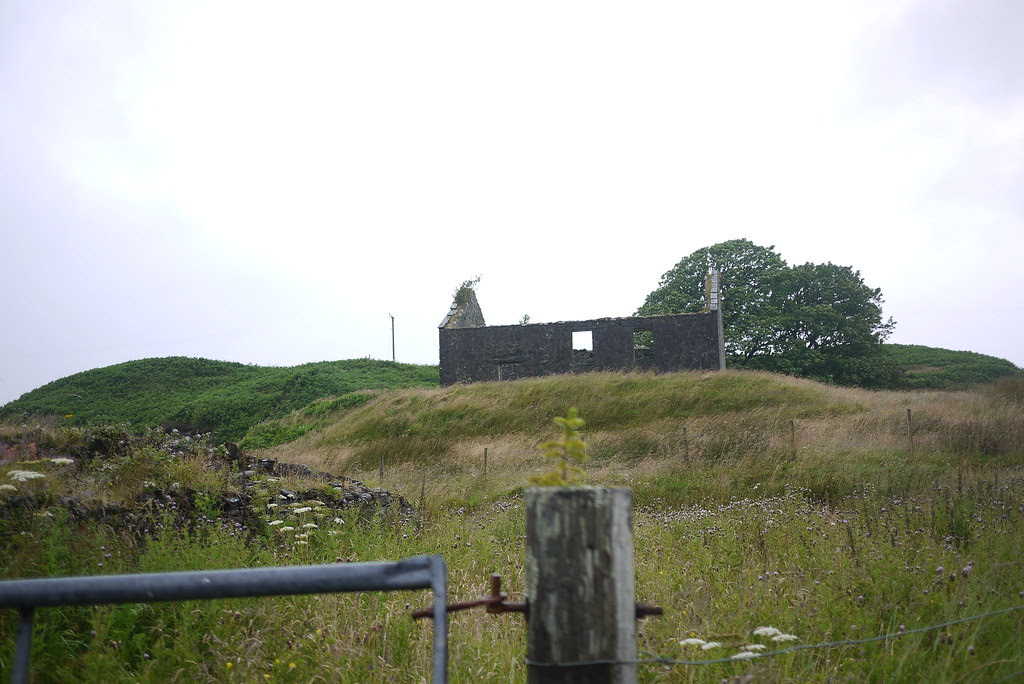 We stopped for lunch in a village (I can't remember the name of it, but the locals call it Easdale - which is actually the island where slate is quarried right opposite); lunch was goooood, and the village itself couldn't really get much more Scottish: 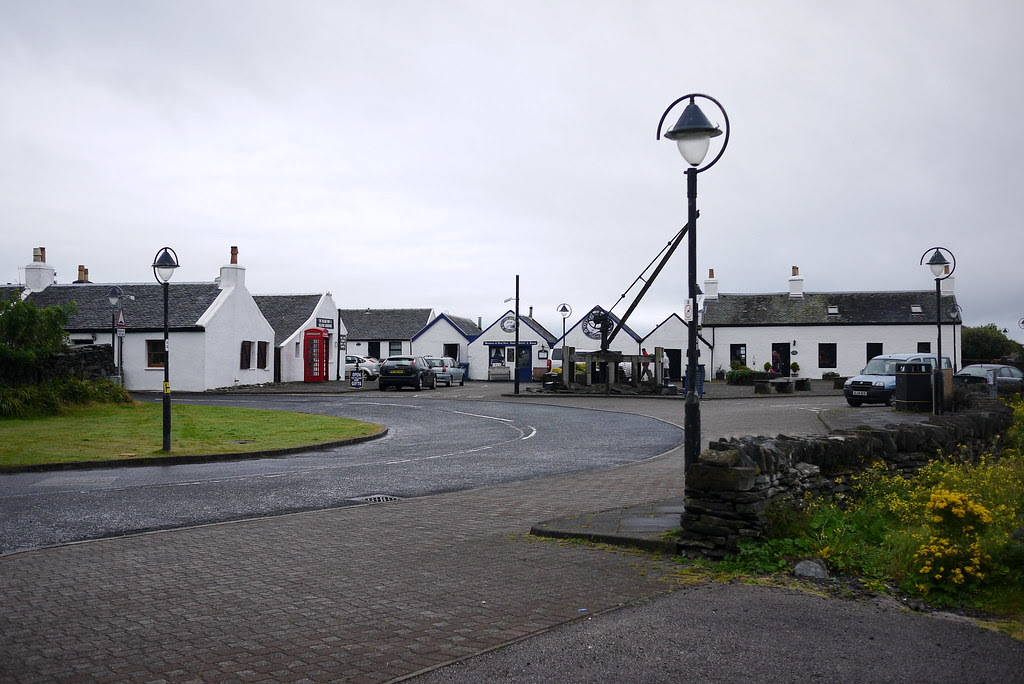 Replete with ye olde phonebox. Then, after another dog walk, it was time to make a push for home. We made our way through Kilmartin Glen and passed Dunadd (one of my favourite places, which we also visited a few years ago), but it was getting too late to stop if we wanted to get back home for dinner and time to let the kids decompress before bed. It was nice to see it, though, albeit briefly.

The best thing, though - the Highlands in the height of midgie season, and no midgie bites. All thanks to this stuff. Seriously. It's like a miracle.
Posted by Seren at 21:49 8 comments: