I've had an old friend staying since the weekend so we've had some great days out enjoying the scenery. And a fair few museums, since the weather has mostly sucked. I have lots of photos to share over the next few posts, though considering the aforementioned weather there won't be much in the way of beautiful Scottish landscapes...

One of the places we went to was the Hunterian Museum at Glasgow University, which has recently reopened after two years of refurbishment (with much fanfare). There's a lot of new stuff there, mostly pickled limbs and deformed animals of one form or another that were the stuff of legend when I was at uni (then viewable only by appointment, and I was told only those who were studying a relevant field would be allowed). These are a charming and delightful sight for some, I'm sure. Not so much if you have delicate sensibilities, though. Or just aren't feeling too great that day.

The stuff I was hoping to see, though, was the Roman artefacts from the Antonine - something the Hunterian has long been known for. With the reopening of the museum they've concentrated on advertising the Roman stuff, and way back when I was at uni they had a few altars on display at the least, so I wanted to see if it had been expanded and see if there was any Celtic stuff. Not so much new, it turns out, but the new displays do make everything a lot prettier, at least. They've added stuff that reflects how the Romans and the locals got on together, so that's where it gets interesting for me, and that's what I thought I'd start with first in this series of posts.

Most of the aretefacts on display come from the Roman forts along the Antonine Wall and others in the Clyde valley. The Antonine Wall starts in Bo'ness over in the east of Scotland (where I used to live), and cuts across to the west, through the northern outskirts of Glasgow, and it was only occupied for a relatively short period of time before the Romans abandoned it and withdrew back to Hadrian's Wall.

There were forts along the wall at regular intervals, and the soldiers there settled in and established a life for themselves while they were stuck out here in the Roman frontier. They weren't allowed to marry while they were in the army, but that didn't stop them forming relationships with the locals, having kids and attracting some of the locals to set up homesteads right next to the forts and so on. These leather shoes found at the Barr Hill Roman fort show just that - adults and children all in one place: 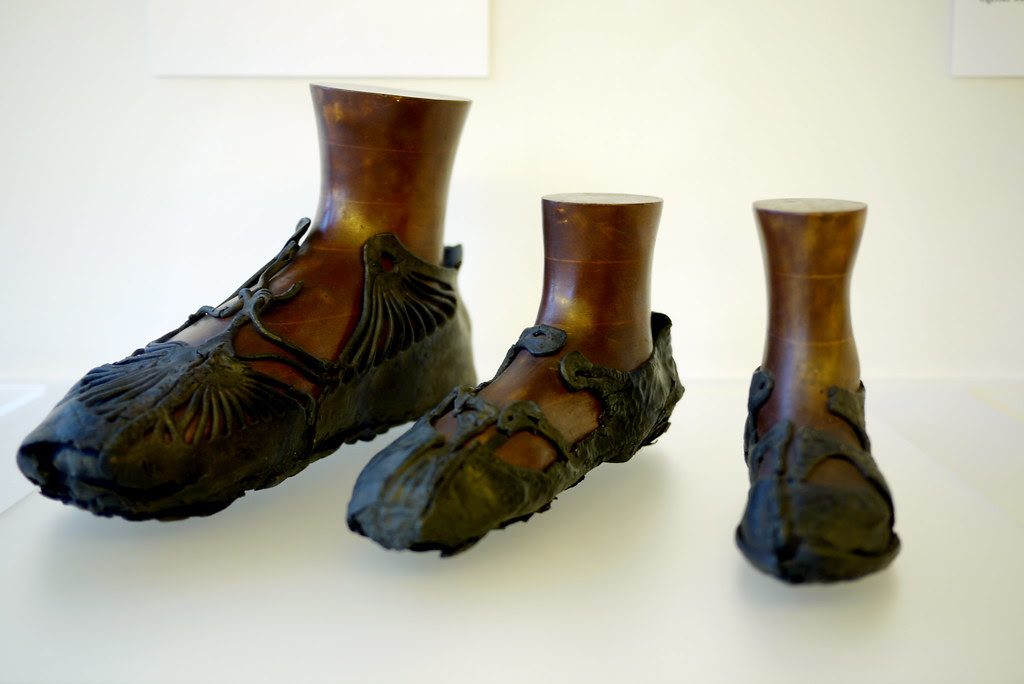 It's difficult to say just how integrated the Romans were with the local population (who would've been Brythonic speakers), or if the Romans had much of a lasting effect on them. It's also difficult to say how those who did form relationships with the legionaries changed - whether they adopted Roman ways, language, religious practice, that sort of thing. In the bigger picture, there doesn't seem to have been much of a lasting effect in this part of Britain.

Certainly the Romans themselves had some concern about local gods, though, and they approached them in their own religious terms. These altars here are dedicated to 'the Spirit of the Land of Britain' or 'Britannia': 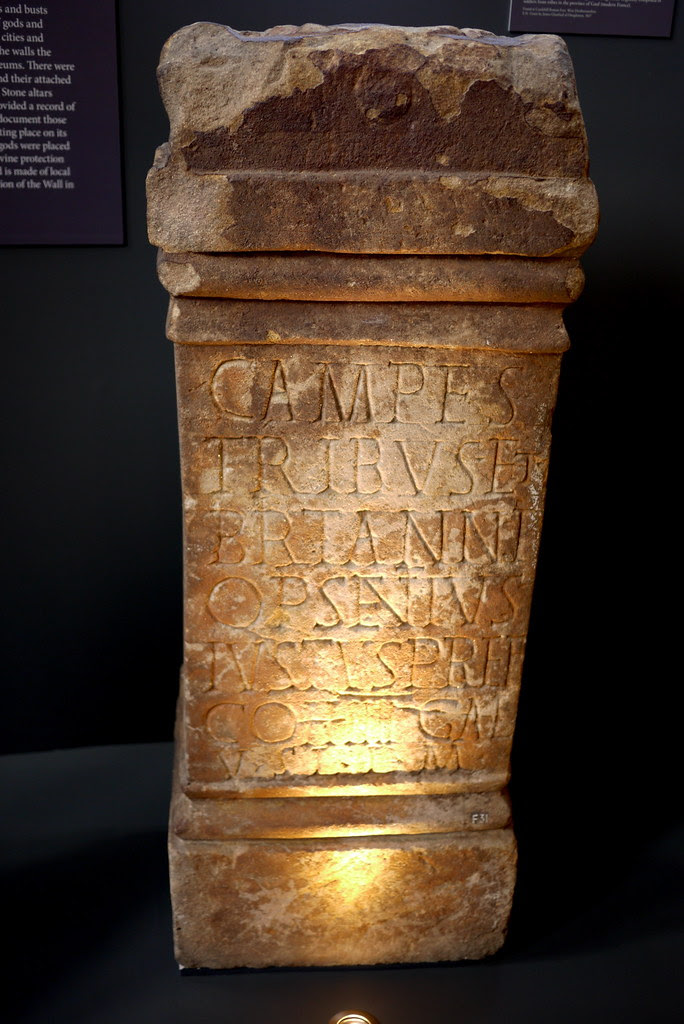 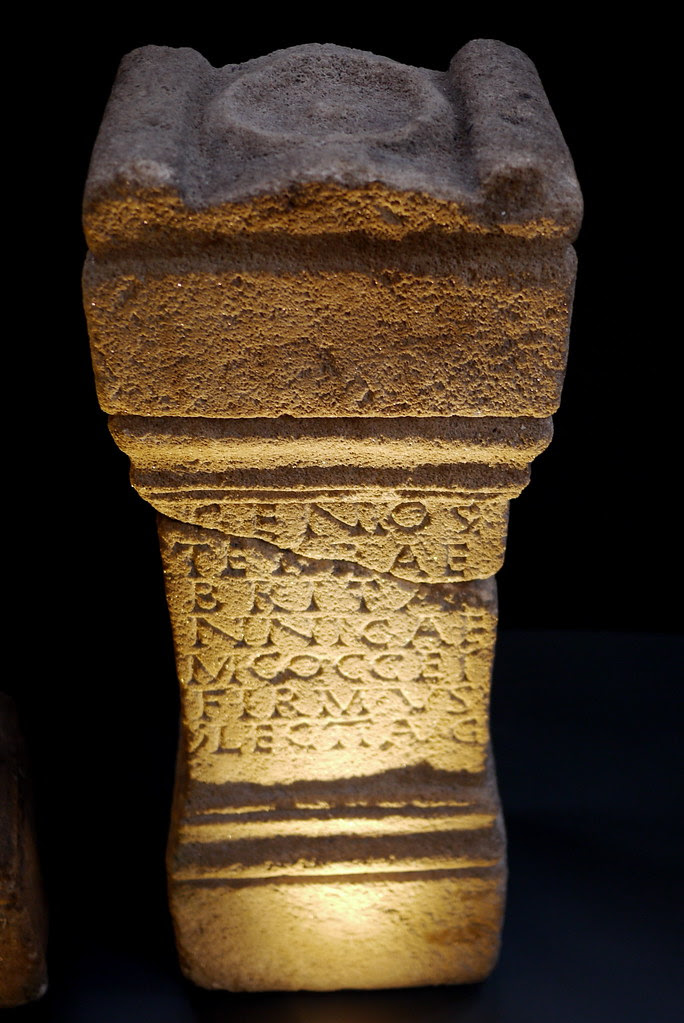 The first altar is dedicated to the goddesses of the parade ground and Britannia, while the second inscription reads: GENIO TERRAE BRITANNICAE M COCCEI FIRMUS 7 LEG II AUG, "To the presiding Spirit of the Land of Britain, Marcus Cocceius Firmus, centurion in the Second Augustan Legion." In essence, the altars and the offerings made on it - milk, oil or wine, usually, poured into the 'dish' at the top - were meant to appease the land that the Romans were occupying, something that the local gods, who looked after their own people, would probably not be too pleased about. Interlopers! These offerings were meant to acknowledge that, and try to form some sort of peace with them.

Marcus Firmus also dedicated four other altars, one of which also mentions the Gaulish goddess Epona: 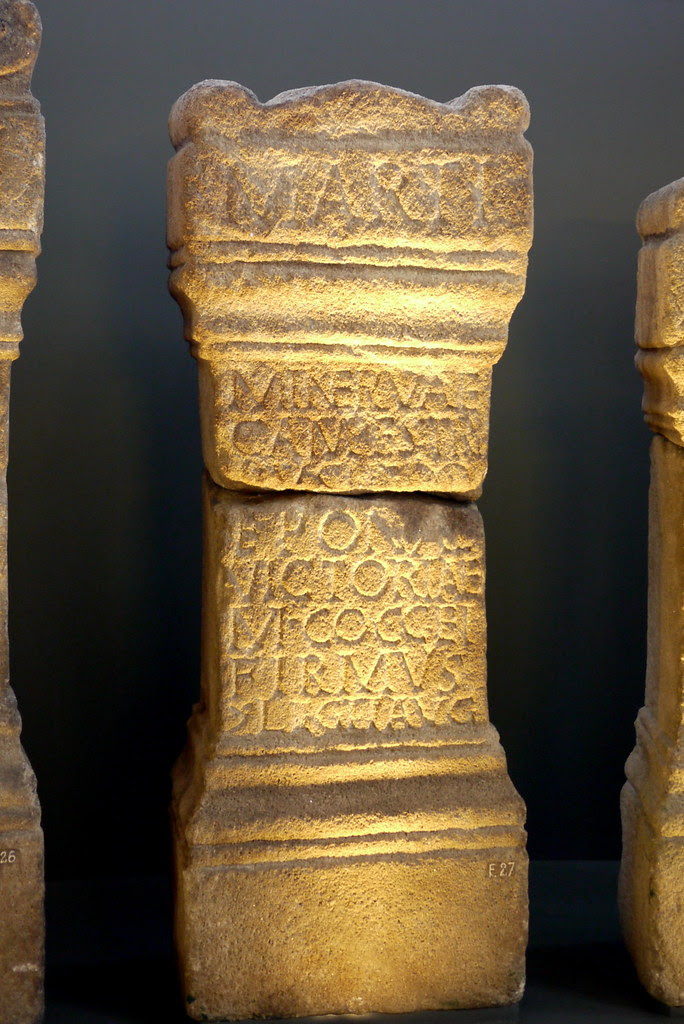 This inscription reads: MARTI MINERVAE CAMPESTRIBUS HERC(U)L(I) EPONAE VICTORIAE , COCCEI FIRMUS LEG II AUG, "To Mars, Minerva, the Goddesses of the Parade Ground, Hercules, Epona (and) Victory, Marcus Cocceius Firmus, centurion of the Second Augustan Legion." Epona is the only Celtic deity adopted into Roman religion - in general, while local Celtic deities are sometimes mentioned amongst deities on some altars, or syncretised with particular deities, they themselves weren't usually adopted into Roman practice in a wider sense. She was very popular amongst the Roman cavalry.

In some instances, we find locals (or local styles) being depicted. This water nymph from a Roman bathhouse in West Dunbartonshire, for example: 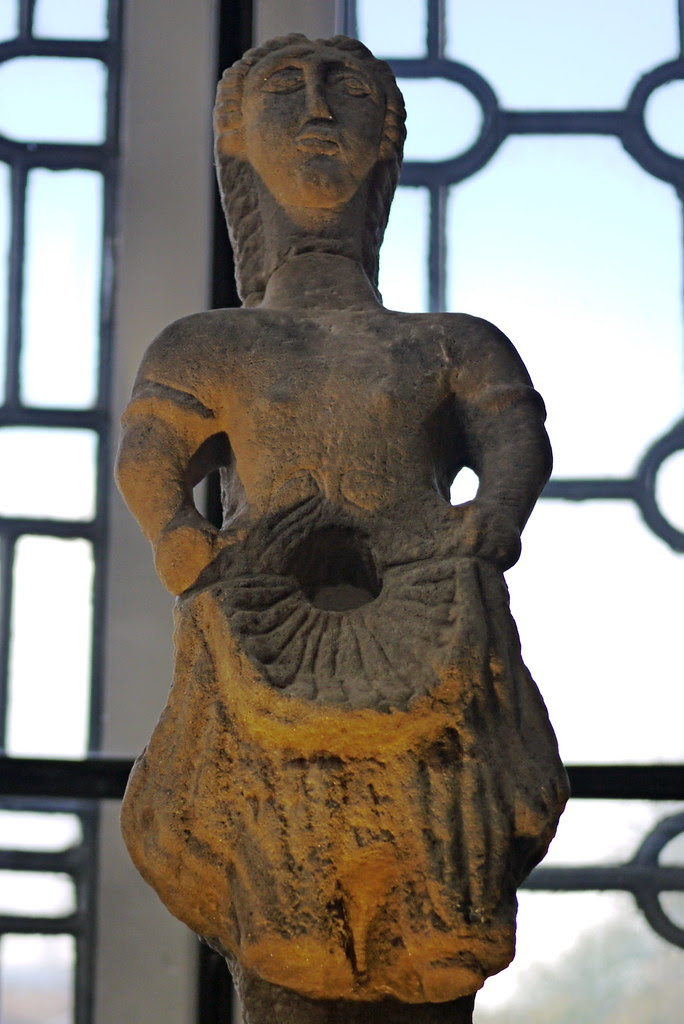 The armlets she's wearing indicate she's Celtic rather than Roman. The folds of her skirt are thought to represent flowing water.

And then there are the locals being thoroughly stomped on: 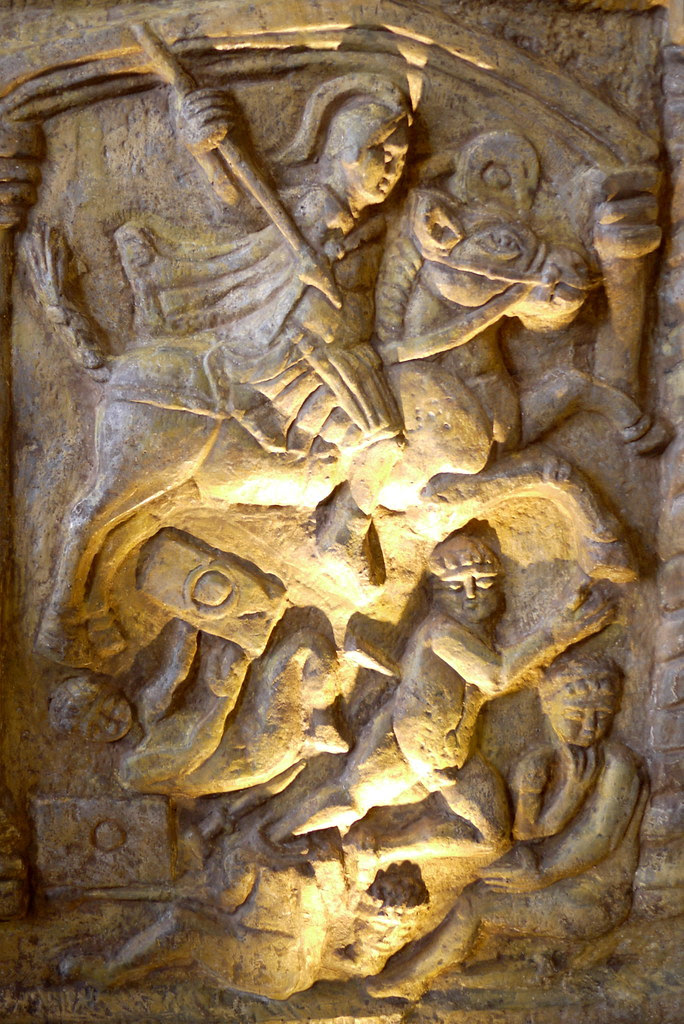 The hair and beards seem to be very distinctive 'Celtic' features, here are some more local captives (the two figures left and right): 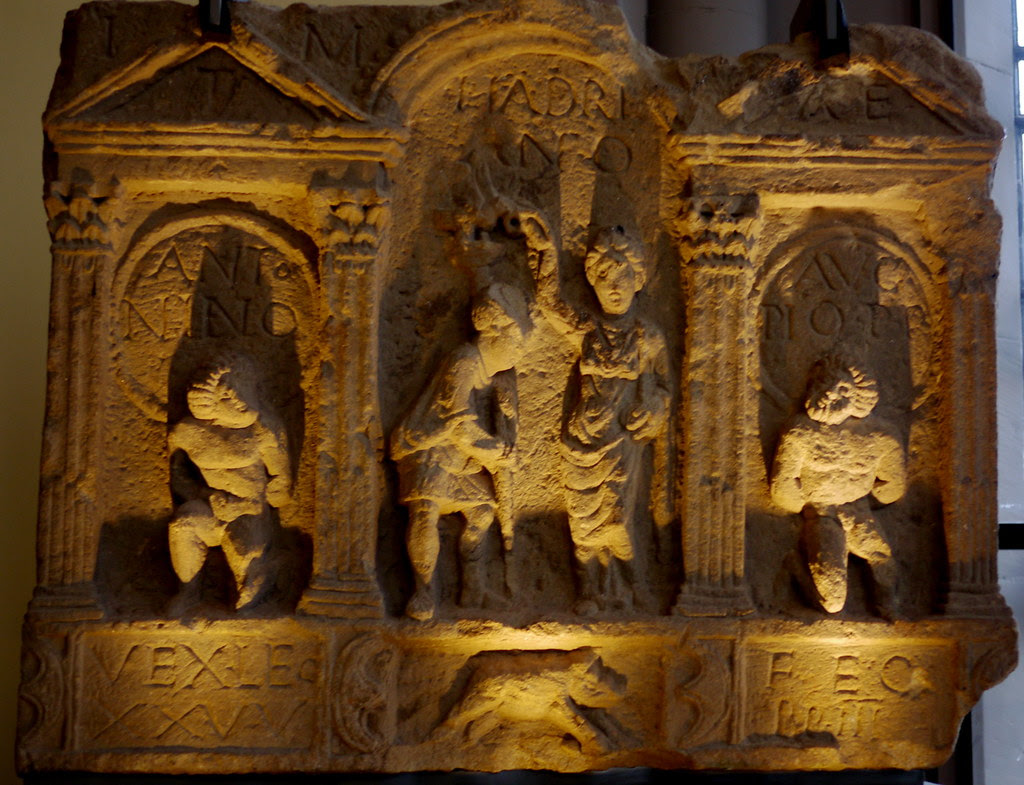 I think that's Victory in the middle, so the whole scene is celebrating a win over the local hoards.

These are some coins minted in 48BC, but found in one of the forts on the Antonine Wall. They're thought to show Gaulish 'barbarians' captured during Julius Caesar's campaigns: 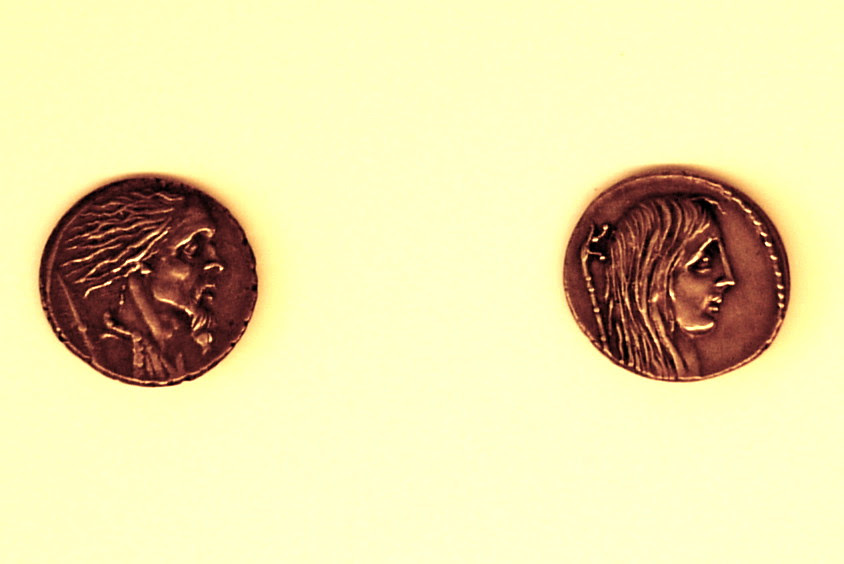 The styles here are very different, so it does seem that the Romans generally tried to show accurate depictions of whoever it was they were trying to subjugate. So it was kind of weird for me, seeing pictures of the past. People from 2,000 years or so ago, who lived pretty close to where I am just now. And kinda cool too.
Posted by Seren at 14:40 2 comments: