As I posted a few weeks ago(ish) now, my celebrations for Bealltainn didn't happen at the beginning of this month due to lurgy and the resulting putting-my-back-out-again-from-all-the-coughing. Thanks back. I'd hoped to get my celebrations done on the Old Style date, at least, which should have been around May 14-15th, allowing for the increasing drift between the Julian (Old Style) and Gregorian (our current, 'New Style') calendar. Unfortunately my back wasn't quite up to it by then either, although I did make sure to harvest some rowan before then, at the least.

Since then an increase in morphine and a steroid injection (although I'm still dubious as to how much it's actually helping) and plenty of rest has helped, and finally I felt up to getting my celebrations on. It was kind of a spur of the moment thing, a snap decision I made because I felt I had to do it now. One of the things that spurred me on was the need to replace the plant I've had on my shelf shrine since we moved here; it's been ailing for quite a while and I wanted to make sure I got something else on there before its now seemingly inevitable demise. A trip to the garden centre to get more hamster supplies provided the perfect opportunity for that, and seeing as I was then able to spruce up my shelf, it only seemed right to incorporate that into the festivities.

My poor houseplant (I've no idea what kind it was - or still is, just - unfortunately) is seemingly symptomatic of the problems I've been having over the past year or so. Hopefully the renewal and replacement with a spider plant will help bring a tide of changes for the better. Signs are a tricky thing. But I can't ignore the significance of the timing...A big part of Bealltainn celebrations is to protect against disaster and murrain in the coming year, and while I don't have a disease per se, I can't say I've been in the best of health for the last year or so.

And so one of the big focuses for my celebrations this year was definitely on the saining. It always is anyway, but this year I felt it necessary to go all out and do a proper good job of it, and so it was out with the old and in with the new. I may not have a herd of cattle or a flock of sheep to drive between the fires, but then again not everyone did when the druids supposedly (according to Cormac's Glossary) sang their incantations over the flames way back when, either. Regardless, the saining, the fires, the coming together as community were important, and in some parts of Ireland and Scotland they still are. So no, I have no cows - alas - to drive between two bonfires, but that doesn't mean the rite itself is irrelevant in this day and age. For most of us, while our livelihoods don't rely on our livestock, pastures or crops in the field, we still need to make a living in order to keep a roof over our heads and food on the table. We still hope for good health and comfort. Especially in this current economic climate, we still have the same sort of concerns about the future as those before us did, and while we may be at some remove from how people used to live when the druids did their thing - while we might not face starvation, and so on, if disaster happens to us - protecting the home and family is as important to me as it ever was to my Irish ancestors, or ancestors in general for that matter. So for me the saining aspects of Bealltainn are as important and relevant today as it ever has been, even though the context may be slightly different.

Aside from the saining then, and the ceremonial extinguishing and relighting the hearth, there were offerings and devotions, there were songs and prayer, charms were made and hung and the first water of the Bealltainn morning was skimmed and will be kept for rites throughout the next year. In return (perhaps) some old friends reappeared after a long absence - my old friends the foxes, and the owl. It's been a long while since we've seen them out and about.

For the most part I got everything done that I wanted to do, although the kids were not so bothered about joining in with the things we usually do together. The weather has been gloriously sunny recently and there are plenty of kids outside playing, and frankly, they're far more interesting than I am these days. Even so, Rosie, who's five now and is "the arty one" happily did our seasonal mural. Any excuse to get gluing, as far as Rosie's concerned (while Tom decided he'd rather make a Lego Star Wars 'movie' with daddy): 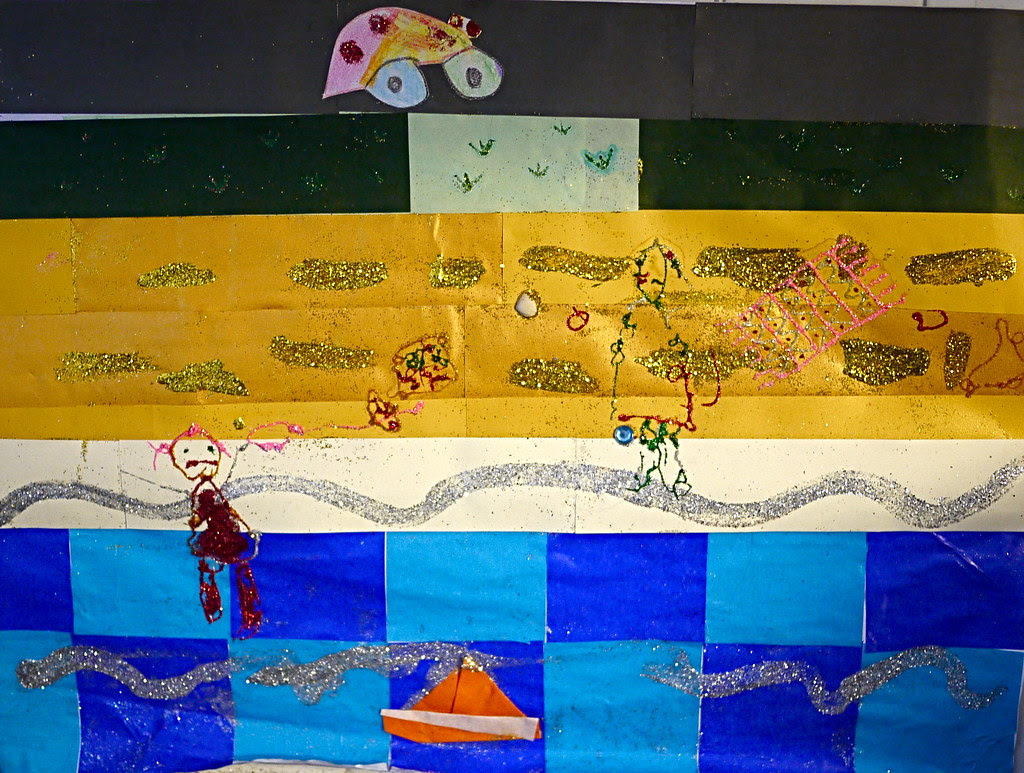 It is, if you can't tell, a seaside-themed sort of scene again (she did a similar picture at Là Fhèill Brìghde). This time she wanted it stripy, so I helped with all the sticking, under her careful direction, and she did most of the rest. The checkered blue and then white is the sea with silvery waves and a boat, the gold-yellow is the sand, with a stripe of green grass verge and then a road (that's a car, not a giant ladybird...). There's a girl in the sea flying a kite, and then there's supposed to be someone on the beach near the beach towel, but unfortunately Rosie ran out of glitter-glue before she could finish it properly, took a huff and didn't want to use anything else to finish it off. Once it had dried she decided she was pleased enough with it after all, and that was that, it was declared done. I think this may be a hint for the upcoming summer holidays; if the weather (and my back) holds out, I foresee many an afternoon at the beach in my future. Fine by me! I'm sure the dogs agree.

Being on morphine means it's difficult for me to eat proper meals at the moment - I don't have much of an appetite and if I do eat a full meal then it often doesn't sit too well with me. It's great for my waistline, but not so much for enjoying feasting; my stomach did manage to oblige me this one time, and as planned I had a go at a clootie dumpling for pudding (by which I mean dessert, if you're American, apparently...). The recipe calls for buttermilk, which was handy because we churned some butter: 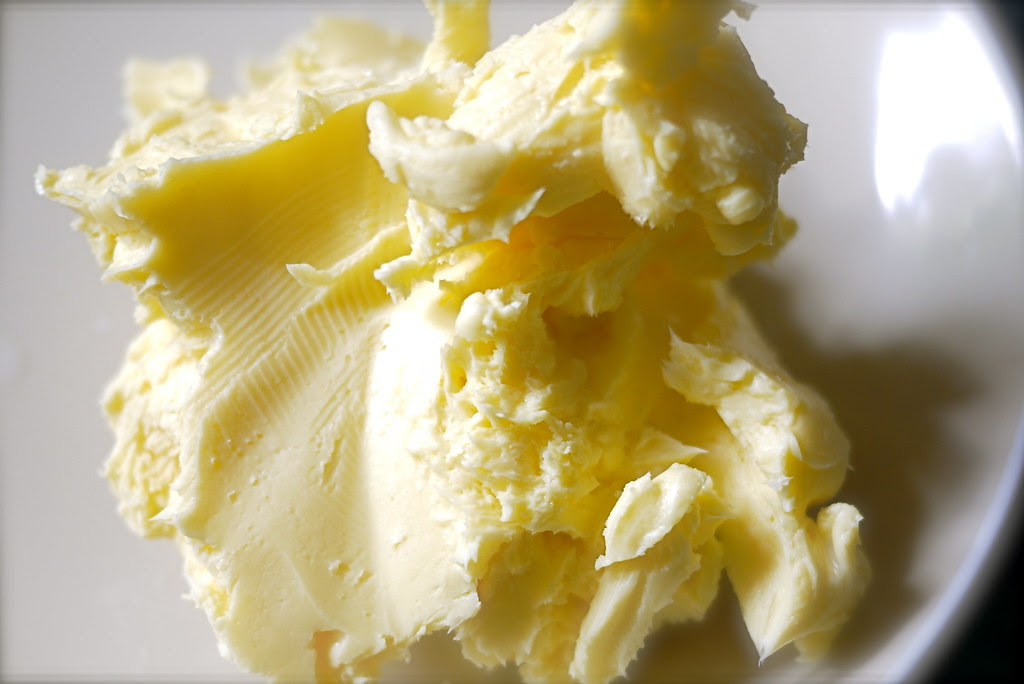 I'm getting better at squeezing the excess liquid out now, I think. This time I used an electric whisk - far easier on the back - and it worked really well. Unfortunately, the clootie dumpling wasn't quite as successful...once the ingredients are all mixed together you put it in a cheese cloth and tie it up, then boil it. It takes about three hours to cook so obviously you have to keep an eye on the pot to make sure it doesn't boil dry, unless you have a Really Big Pot. I don't, so my mother's phone call was Really Bad Timing because the pot did boil dry. The dumpling wasn't burnt but the clootie itself was, and so dumpling ended up being not so much a dumpling as a soggy, stodgy mess. Tasty but soggy. Alas, with the clootie sacrificed there will not be any attempts at making crowdie just yet.

And that's how summer arrived at our house; if the weather reports are anything to go by for this week, it was just in time. Hopefully I'll be able to get outside and enjoy the record temperatures we're supposed to have soon.
Posted by Seren at 10:19 2 comments: Links to this post