Ice cream! And another review

Autumn is well and truly here now - no more wavering on the matter in these here parts. And with it comes the end of the school holidays (finally) and now, for me, a little more freedom than I'm used to. Both of the kids are in school now and as of tomorrow my daughter will be in school full-time, after spending the first couple of weeks only going in for the mornings.

To celebrate the start of a new era, and finish our holiday in style, I took the kids out to Largs (a nearby town and something of a tourist trap) for an ice cream. Not just any ice cream: 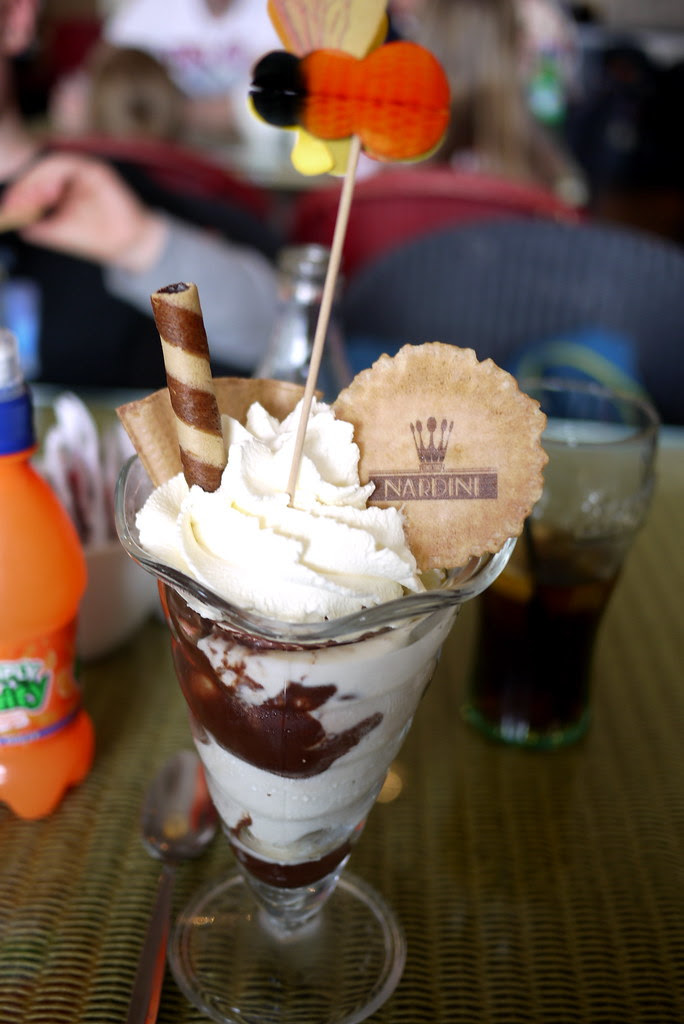 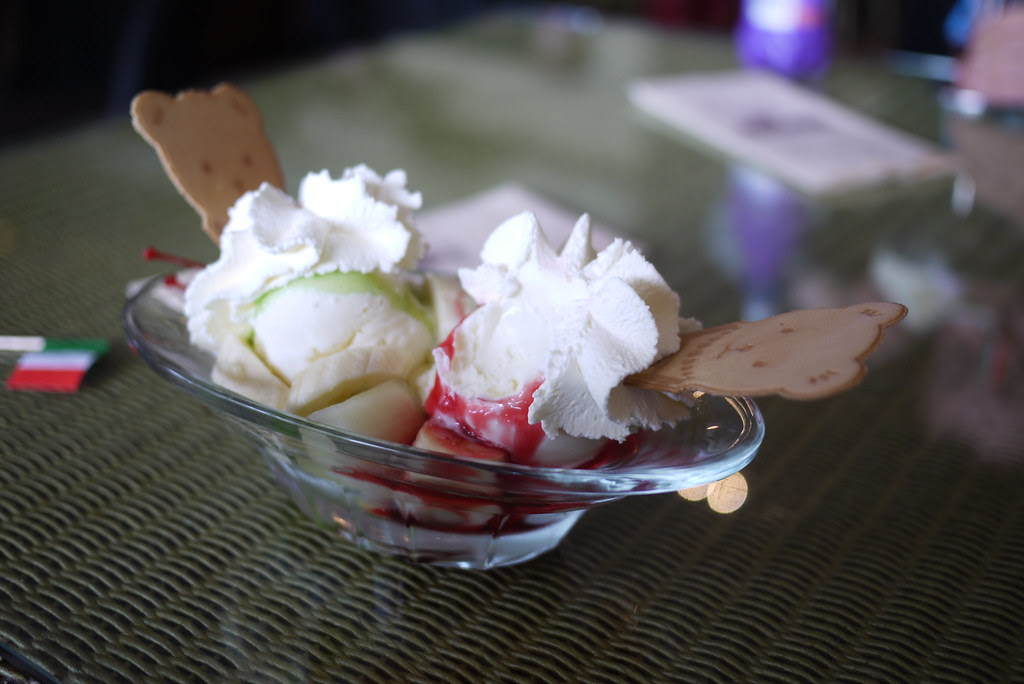 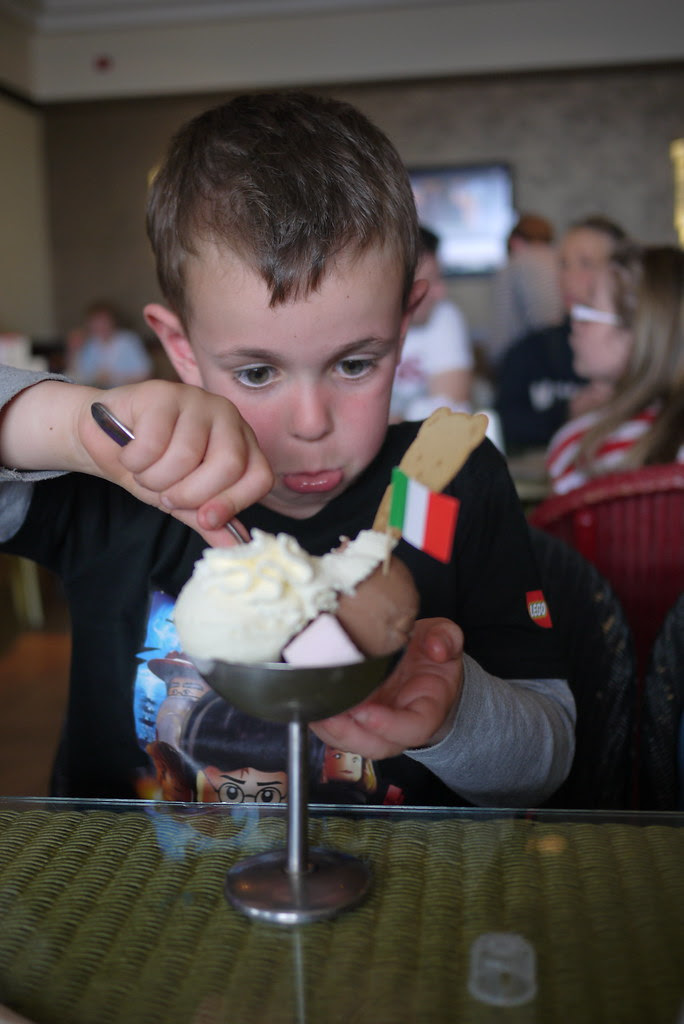 Proper ice cream. It's definitely a perk of living in a place like this, even if the weather sucks a lot of the time.

Once my back problems are resolved - hopefully in the very near future - I shall have to start making myself useful again. In the meantime I'm sure I'll think of some things to do to keep me out of trouble, but for now, here's another review:

A common problem when trying to figure out this whole Gaelic Polytheism thing is finding where the Christianity starts and the paganism ends when we look at all of the source material we have to work with. A lot of what we see might look pagan, but there are things that we really can't take at face value, because things are never that simple or easy. Otherwise we might end up getting a bit over-excited about things and leap to conclusions like deciding that if we just strip out the obviously Christian bits we'll get the paganism and it's all cool and groovy. It's not as simple as that, for sure, but the situation's not as dire as some academics might like to think when they try to see everything as irreconcilably Christian just because it comes from the hands of Christian scribes, so let's call the whole thing off...

This is a book that I think is invaluable in getting a more balanced view, and more than that, it's a fantastic resource for looking at the kind of things we might see that are pre-Christian in origin (and thus useful to us, as polytheists) as far as Gaelic belief is concerned. Or not, as the case maybe, and accounting for all of the various shades of grey in between (and I'm sure there's far more than fifty shades there, and none of them involve abusive relationships or bad fan-fic, so that's cool. Anyway).

The purpose of this book is to explore the relationship between Christianity, native belief (as evidenced in the earliest Irish literature through to the relatively modern Hebridean evidence primarily gathered by Carmichael), and what's come to be known as "Celtic Christianity." Given Celtic Christianity's emphasis on nature, each chapter looks at a different subject like the land and the landscape, trees, water, fire, birds, the seasons, and the elements and explores whether such attitudes towards them might be evidence of pre-Christian belief, Christianity, or a synthesis of the two. For the most part there can't be any solid conclusions drawn and to Low's credit she let's the evidence she compiles speak for itself, allowing the reader to draw their own conclusions.

The broad scope - from the earliest literature to the modern - is something that I particularly liked because it underscores the point that often seems to be missed in CR these days: It's not just about looking at the Iron Age, it's looking at the whole continuum from what we know of pre-Christian times to the survivals we find today, and all the bits in between.

This is all great stuff and there is so much food for thought it's difficult to cover everything. All of the usual things you'd expect to find are there - the relationship between the land, the goddesses, and the people, the tradition of the sacred tree - the bile - the associations of birds with the gods, and so on, along with parallels that might found in the Bible that ultimately may have led to the survival and adaptation of such pre-Christian concepts into a Christian context. And so on.

Of particular interest to me was the chapter on the seasons and nature, as we see it articulated in nature poetry. There is a lot of Christian poetry devoted to the subject in medieval Ireland, but Low (following Kenneth Jackson) suggests that some of the earliest examples - Finn's song to the summer, or the famous poem heralding winter - may be hangovers from pre-Christian belief, where the seasons were possibly heralded (in the case of summer) or lamented (in the case of winter) in the form of seasonal carols. In the chapter on fire and the sun Low gives an overview of the arguments for and against solar deities. Being firmly on the side of the no camp on that one - which I happen to agree with - it was great to see the argument laid out so plainly, but she does explore the alternative view as well, if only to refute it. It would be interesting to see what those who might argue in favour of solar deities might have to say about it, but personally I found it to be one of the most useful bits of the book.

This is not to say the book is without its flaws. I don't think there's anything major here but you might find yourself quibbling with some of the arguments given, but that kind of thing is par for the course with any book. It's a fairly slim volume so some things get glossed over more than you might like (or maybe that's a good thing if you don't want it to get too complicated), and there are certainly some things that are missing - including some references I was surprised not to see, which doesn't have a massive impact over all, but I would've been interested to see some comment about it all nonetheless. Noticeably absent was discussion or even mention of the three realms, but I'm fairly sure that this has more to do with the time of publication - a few years, at least, before Liam Mac Mathúna's work was published, for sure - so it might be that Low just wasn't aware of it. It does date it slightly, though.

My main issue is the fact that Low refers to pre-Christian beliefs and religions as "primal." I really think that it's maybe an instinctive thing because it does seem to be a valid term to use in an anthropological sense, but I was always taught to try and avoid terms that might imply judgement values; that something primal is less evolved, perhaps. I couldn't help but wonder, why not just say "pre-Christian"?

Aside from that niggle I really enjoyed the book and would put it on my highly recommended list for sure. I'm not convinced it's a good book for a total beginner, though. This far in it's hard for me to judge because I found it an easy and straightforward read  - there aren't a lot of Teh Big Wurdz to have to keep up with, and where something that's been previously discussed is referenced again a page number is given to allow a quick jump back if needed - but I do wonder if it's maybe a bit more than a beginner might want. It's not a book that spells things out plainly, "this is what the pre-Christian Irish believed" and that's probably what beginners are looking for. I'd still appreciate a book like that, to be honest...Still and all, I think this is about as good as it gets right now. For the non-beginner, or the beginner who wants to stick with it, I think the book is absolutely invaluable.
Posted by Seren at 21:32 1 comment: