Really, it's about respect...

I find myself in a bit of a pickle.

It seems I've had partial success since yesterday's post, as Lady Cattra Shadow the Scarlet Cat has at least taken down the articles she ripped from my site (as you'll no doubt see if you click on the links of my previous post). I'm thankful for that, and appreciate her quick response on that matter at least.

Unfortunately, it appears she's still passing off some of my photos of the turnip lanterns I've carved over the past few years as her own, or she's at least using them without permission for the sake of making her own buttons and illustrations for other people's articles she's hosting on her sites. See this? 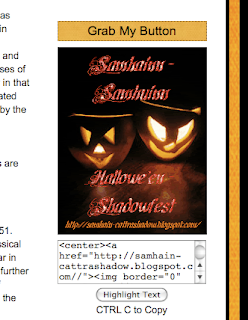 Those are the first turnips I ever carved. And now they've been sparklified and are more sparkly than Edward Cullen in glorious daylight, so people can use it to link to her blog.

You'll also find this picture of another turnip, from another year, being used in a few places: 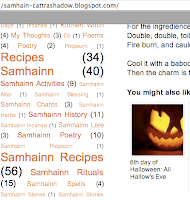 And I've asked once again for her to remove them, and once again, I've received no response from her. I think that's poor show. But really, now I'm stuck with two options: Leave her be, except for a quiet rambly snark to myself here on my blog, or b) issue takedown notices through the DMCA with both Blogspot and Photobucket to force her to stop using my work.

Option b) seems overkill. I mean, yes, this is the internet and of course it's SRS BZNS, and yes, it would be within my right to do so as the copyright holder for those pictures - it's thoroughly (legally and morally) wrong to use my work without regard for copyright laws or even my thoughts on the matter, but still. If I do that Lady Cattra will more than likely lose her blogs and Photobucket albums for breaching their terms and conditions, and all I really want is for her to stop using my pictures. It's not too much to ask, surely?

Why does this annoy me so much? Honestly, I'm surprised at myself that I'm annoyed. I mean, they're only pictures, aren't they? And it's not like this sort of thing has never happened on the internet before...It's rife within the neopagan community in particular.

To be fair, this is the first time that this sort of thing has happened with my work, that I'm aware of, so it's kind of new territory for me. And my dismay is not so much that somebody's taken my stuff (it's not like it's uncommon, as I said), but that the person who took those articles, and continues to use my pictures, has an outlook that is so antithetical to my own. Her beliefs and my beliefs are apparently very different, spiritually, and we don't find ourselves in agreement on many points, I think.

People have asked to use my work and my pictures before now, and I've always said yes because they asked, and I was more than happy to share and help a friend out, or whatever, because the people asking have generally been on the same wavelength as me. Had I the choice in this case, though, I would not choose to have my work associated with someone like that, not least because they don't seem to see anything wrong with just taking things as they please to suit their own purpose and blog stats. Although I have to say I'm amused at the fact that Lady Cattra appears keen to prevent people from stealing her work (or the other articles she's copied and pasted from elsewhere, that is - try right clicking on one of her pages). Clearly she thinks it's wrong for people to do it to her, but doesn't hold those same standards for herself. Hmm.

Plus, it's just rude.

I put time and effort into my research and writing. I enjoy doing it, and I enjoy sharing it - and I might as well do something with it. Realistically, though, I know that once I put them out there, there's not a lot I can do beyond that. People will take from them what they will, good or bad - ideas and interpretations that maybe I didn't intend, on the one hand, or on the other, I'm well aware of the fact that there are some unscrupulous people out there who are more than happy to pass them off as their own. Or they see a pretty picture, and decide to use it as their own.

To me, though, those pretty pictures are memories. Those are pictures of intimate spiritual experiences that I've chosen to share on my blog or website because I believe that in doing so, maybe it will give people a better idea of what reconstructionism is all about, in that it's not just about reading and book lists and researching and talking about stuff. It's about doing and living, and expressing one's beliefs, too (and it's not just me who's doing this, I hasten to add. I'm not special or nuffink). But in sharing what I do, I learn about myself, too, and it helps me figure out what works and what doesn't as I evolve along this path. Sometimes I look back and see what I can do that would work better, sometimes it's other people that help me figure stuff out. For someone to come along and blithely take those photos without a second thought other than 'those'll look great on my blog!', that kind of irks me a little. It's disrespectful.

But as I said, in making a choice to share this stuff, I open myself up to various problems, not least having my stuff stolen. And they're only pictures, aren't they, really? Unless I want to take a legal route, for the sake of some pictures on someone's blog in an insignificant corner of the internet, there's not a lot I can do, other than make it very clear that I'm not happy about it.

I suppose I should be flattered. But it's kind of like being flattered that a burglar chose my house to nick stuff from, rather than them next door with the bigger house and nicer fixtures and fittings. It's not flattering, really. Not at all.

If, for some reason, her blog gets taken down due to your complaints, she will undoubtedly start a new one somewhere, but she might actually think about it before she steals your things again. If she's stealing your stuff, there is no doubt she's also stealing that of other people as well.

This is true. The more I think about it, and the more I look into it, the more likely it is that I'll be issuing a takedown notice. I thought a little venting would help, but I'm still annoyed, and it's not worth stewing when I can do something about it, really.

From what I've seen she's done a lot of reposts, some of which are credited (to Mike Nichols, C J Melia and a few others). Some aren't, but I would guess they're still not her work. As far as I know Mike Nichols gives permission for his work to be reposted so long as credit's given, not sure about the others. So yeah, I guess there's more to it than just me going on here.

Thanks for a little objectivity there...

In looking at some of her other blogs, painful as that might be (all have the over abundance of sparkles and such crap, it truly hurts the eyes) she does seem very concerned about keeping her copyWRITE. I have noted elsewhere, that people who misunderstand what the word is, misunderstand what it means and are often hopeless in ever learning to not steal other people's work.

Therefore I have to agree, she seems to feel free to steal from anyone and likely is. I think all her time is spent in putting in the sparkles and not in doing any actual work on her blogs. She lets others do that, whether they want to or not.

I certainly wouldn't worry about her losing her blogs, she's not adding anything original to the bandwidth only stealing. And those sparkles do no one no good.

I didn't notice she's copyrighted everything, but yeah, she's got her wee 'copywrite' notice tucked away near the bottom of each page. So she's committing copyright infringement and fraud. Fun!

I need to sort my flickr account out before I can start the takedown process - it's where I host the pictures and they're clearly copyrighted there, but I need to resubscribe to a pro account so I can access them again. Unfortunately my bank messed up my credit card payment this month, so I have to wait until Monday when the money clears on it to be able to use it. Stoopid banks.