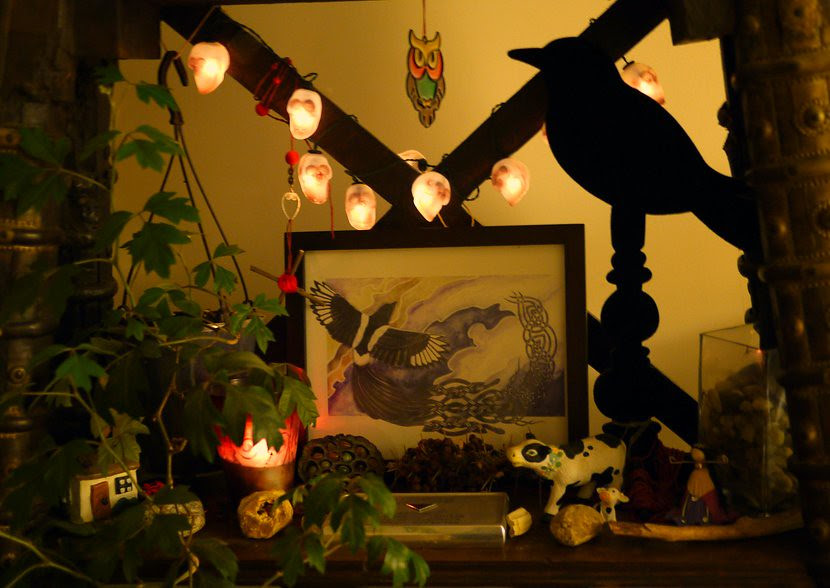 My hearth shrine, decorated with the tasteful skull-shaped lights for Samhainn...

It's been an odd transition period from summer-half to winter-half round here. Interminable rain and grey skies, and now gloriously frosty and sunny mornings (followed by more rain), and although I celebrated Samhainn two weeks ago now it feels like the transition into winter has only just secured itself and sunk its teeth in. The cold's making me feel kind of hibernaty - no bad thing when I have a pile of books to get through.

I got a pile of articles from my last trip to the library, and some of them are really good. Some of them I haven't got round to yet, but I thought it might be useful to give a brief rundown of the good ones before I go on to do a book review....


And so, onto the book review, one of my latest library snags:

Originally published in 1985, this is a collection of essays on marriage throughout the history of Ireland. Each chapter is written by a different author, and covers a distinct period in history - from marriage in early Ireland, through to the twentieth century. The exception to the rule is Caoimhín Ó Danachair's (KevinDanaher's) article on 'Marriage in Irish folk tradition', and it really stood out for me as the best of the lot (also, the most helpful, to be fair).

The weakest eassy was the first - 'Marriage in early Ireland' by Donnchadh Ó Corráin. It's well written and informative, to be sure, but having gone into the subject in great detail already it seems that there are better sources to look at this (Bart Jaksi's chapter in 'The Fragility of Her Sex?', Fergus Kelly's Early Irish Law, and Daibhi Ó Cróinín's Early Medieval Ireland spring to mind), and for the most part it's probably safe to say that this is simply for the reason that those sources are more up to date and thorough. I couldn't help but feel that some of the issues were fudged a little here, but the article was sparser in references than I'd've liked it to have been, so it was difficult to follow up or check some of the points that seemed a little off (mainly linguistic points, possibly a matter of odd spelling).

Cosgrove's own chapter on 'Marriage in medieval Ireland' was a good read, and helpful for my reasearch, too, and the rest of the chapters were good too, though less relevant and therefore of slightly less interest to my aims. The last chapter in particular, 'Marriage in Ireland in the twentieth century' was more than a little dull for me, but then statistics have never really been my thing. It will surely be useful to anyone who needs (or wants) to know about marriage statistics of socio-economic groups, or rates of illegitimacy and so on. Me? Not so much.

Ó Danachair's article takes a slight detour from the chronology and focuses on folk memory, which he defines as being around 200 hundred years or so, and folk traditions. What you find here is pretty much what you'd expect from the author - good research, good writing, and engaging to boot. In many respects, this chapter gives a personality to the people being talked about in the other chapters, and while there was a little bit of overlapping in subject matter here and there between this article and the preceding one, on 'Pre-famine Ireland', it at least added to my understanding rather than made me switch off.

One thing I would liked to have seen is some mention, at least, of 'Teltown marriages' and the debate surrounding them, along with the problem of nineteenth century authors, in particular, heavily romanticising and even purposely rusticating the whole subject. OK, so that's two things. But this is a fairly small book, and to be fair there's only so much that you can cram in in such a short space. What it does offer is good, the few reservations I have with the first article aside, and it focuses on historical record, rather than general. I could quite happily have got stuck into a whole lot more, though.
Posted by Seren at 16:34