Last week the kids started back at school for the new school year (and a new school for Tom – he started high school!), and it so happened that we made our celebrations for Lùnastal (on the "Old Style" date, seeing as the weather's kinda weird at the moment and the fruits are taking their time) in the run up to the holidays finishing. We did the usual cleaning and tidying from top to bottom, inside and out, and had the requisite feast and games, with a thorough saining for good measure.

The next day we went into the neighbouring tourist-trap town and had a Proper Good Ice-cream Sundae, as has become our annual end of summer holidays tradition. And we picked up Oscar's medication from the vets, because Oscar is apparently engaged in an epic and seizure-inducing battle against the demons under the living room carpet epileptic. (Thankfully we're getting the kinks worked out and the right dosage sorted now, and he's doing a lot better; it's been a bit of a bumpy ride this past year). And we booked Coco in for his first round of vaccinations. Yes: we have a new addition to the family, our very own ginger ninja (cue shameless excuse to post a cute photo of a kitten): 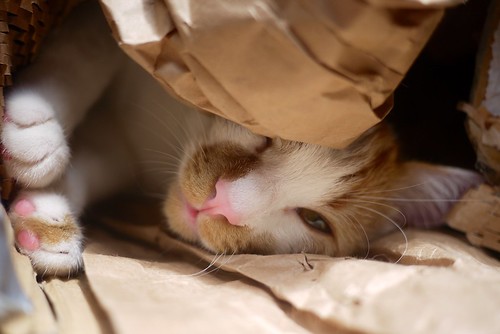 Oscar is a happy puppy, having finally succeeded in making friends with a cat for the first time in his life. His greatest ambition has been achieved. Their favourite pastime is playing Bitey Face together. Coco doesn't seem to mind Oscar's doggy death breath.

With new school years, new schools, new uniforms, and new routines for the kids, times are changing round these parts. The seasons, however, seem to be stuck in a weird flux between summer hanging on for dear life as long as possible, while autumn valiantly tries to barge its way in. Meanwhile, a few brambles have decided it's time to ripen but the bulk of the harvest has a way to go just yet, and I'm holding off on trying to pick any just yet (you can't beat a good apple and bramble crumble).

So while we're waiting, I decided maybe it would be a good idea to make some fat cakes to put out for the birds. It's something I usually do over the winter, but seeing as I had a new mould I wanted to try out, I decided why not whip up a batch a little early: 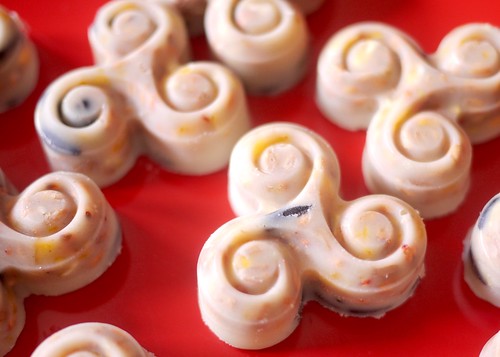 I was originally intending to use the mould to make some wee homemade candles – ones that aren't too big, so I can burn them in one go. The wicks I've ordered are taking forever to arrive, though, so I figured the individual triskeles would make a nice offering to put out (I forgot we have a brain mould... those would've been cool, too).

I'm always conscious of the fact that while birds will usually eat pretty much anything, not everything they'll eat is necessarily good for them nutritionally, so I like to put bird-food out as often as I can. If they're going to eat my offerings, I might as well try and give them a balanced diet, you know? So I mixed some bird seed in with some melted suet until the proportions seemed about right and left them to cool and harden – they don't take long. Rosie, who was off sick on Friday (schools being little more than germ factories, really), helped. We also made a cow and a star, which are considerably bigger and we'll keep those to put out later.

As it is, the crows seem to be enjoying the triskeles, and I'm sure once the weather clears up the smaller birds will be out in force as well. In the meantime, we're just waiting for the blackberries to ripen. It looks like it will be a good harvest this year, they're just taking foreeeeeever.
Posted by Seren at 18:20 No comments: