Cluttering up the place

One of the first things I did when we moved into the house we live in now – back in 2008 – was do all the nesting, the decorating, and the making the place ours. A lot of that involved a painting and wallpapering, getting out in the garden to give it a good overhaul, and taking the opportunity to splurge on furniture, and so on. The usual stuff.

The layout of the house meant that we could also finally find a decent spot for a huge bookshelf Mr Seren took a fancy to some years ago, when we moved into our first house together. It's an antique camel cart that's been adapted into a bookshelf, and it probably quite literally weighs a ton, and two houses later we finally had a place for it to sit, rather than having it dumped somewhere unceremoniously (in the porch of all places, in our previous house). We set it up in the kitchen-dining room, and I decided to dedicate one of the shelves as my shrine area. As the heart of the house, it seemed more appropriate to set it up in the kitchen than on the mantlepiece of the fireplace in the living room (and in a practical sense, the shelf was more out of the way from sticky fingers than the mantlepiece, so nothing would get broken).

Initially, I didn't have much to put on the shelf, so it looked quite sparse. I set it up like this: But I found pretty quickly that most of the plants needed more light than the space could offer them, so a bit of rejigging was necessary (a few more unpacked boxes brought up more things to add, too). Over the years, though, I added more and more bits and pieces – gifts that were sent by wonderful friends, things I found as I went out and about, and some pieces I made myself as the fancy took me. Some of those ended up outside too, as I set up a shrine area up by the rowan tree I planted, with a 'pond,' a small cairn dedicated to my ancestors, space for offerings, some plants that relate to the festivals or my ancestors, some decorative pieces, and so on.

But inside, on my shelf, things have become rather cluttered over the years, and I've now ended up with this: 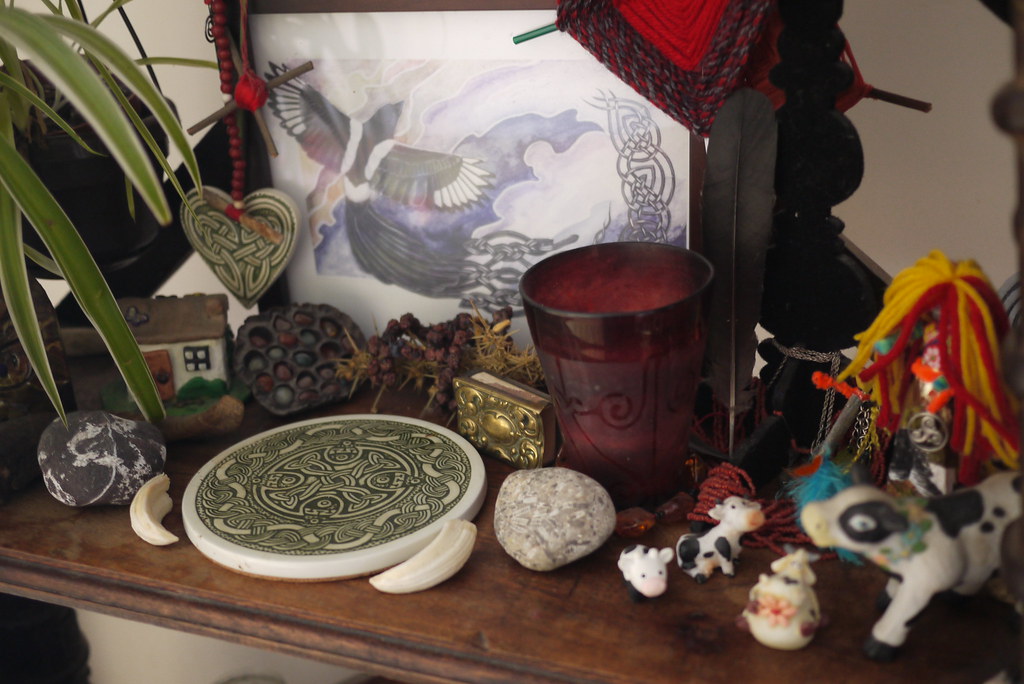 The plate at the front there is for offerings, and I've replaced the plaque from my granddad, that I originally put on there, because I realised wasn't sure what metal it's made from. I decided to remove it in case there was any iron in it – it seemed bad form. So I've replaced it with a small matchbox that used to belong to my grandparents, and which sat on a table of stuff for years. I loved the decoration on it as a kid, so when I found out that mum was going to dump it at a charity shop on my last visit to hers, I decided to 'rescue' it. There's the fossil I found one Midsummer at the beach, the hobhouse and the 'bile' candle holder I made, the Cryptic Crow that takes pride of place and represents Badb, and some protective charms like amber, red coral, rowan berries, and the rowan charms I've made over the years (that are more decorative than the ones I usually do): 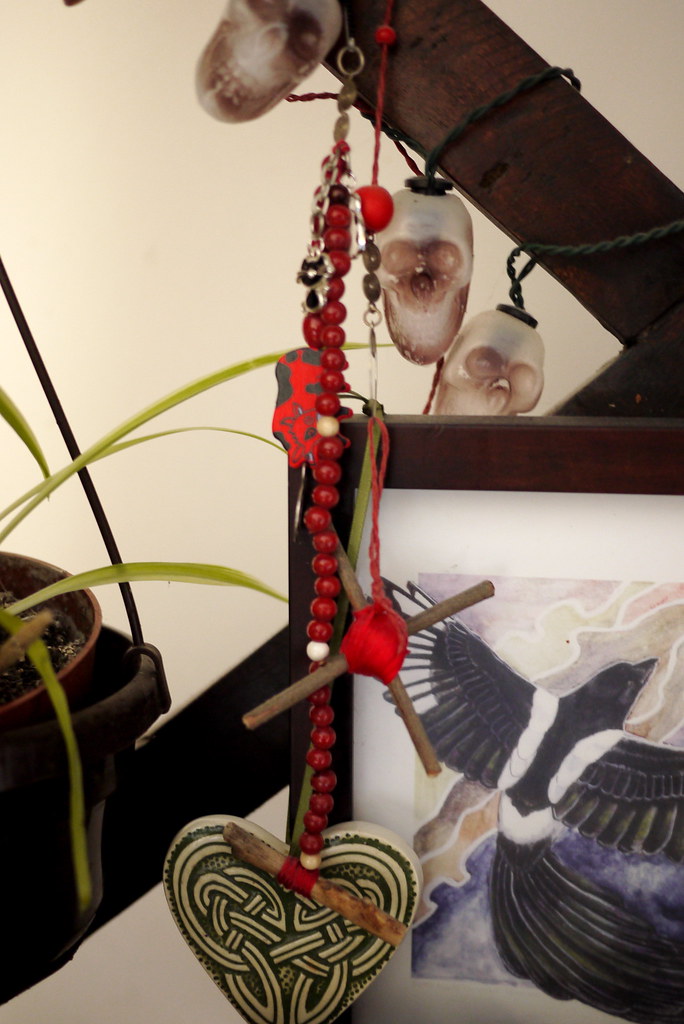 I put the skull lights up for Samhainn one year. The kids insisted they should stay up.

You can't quite see it in the full-shelf picture, but just next to the dealbh Brìde we made this year, Rosie's put another one that she made all by herself out of pipe cleaner, sticky tape, feathers and some decorative charms that 'accidentally' came off some pen lids. Things keep mysteriously appearing on the shelf now that Rosie's tall enough to reach, and so long as things don't mysteriously disappear, that's OK by me. Occasionally she rearranges the cows because apparently they're busy having adventures, which are played out on the shelf, and if the kids had their way any empty space would would be overrun with rocks and shells from the beach. As it is, we've reached a compromise on that and their collection lives on one of the shelves below.

Last Samhainn I had the urge to make some more stuff for the shelf, and given the ancestral theme for the festival I'd been thinking about the kind of thing I could do that tied in with that, but in a way that fitted with the kind of iconography you find throughout the ages. A way of fitting in with the whole continuum, as it were. So I decided on a triskele from Newgrange, a picture of which (from the actual place) Rosie decided to have on her Wall of Wonder in her room: So it's a little bespoke, but my little helper (Rosie) insisted it was finished the way it is. As I traced the swirls free-hand it provided a good focus for meditation and contemplation about things, and it got me in the mood for the festivities.

In my regular observances I only really make offerings at the shelf when the weather isn't suitable for doing that outdoors – I prefer to make offerings outside – although Rosie's taken to putting flowers like dandelions or daisies up there for Brìde. For festivals in particular I tend to perform the bulk of my observances at the shelf, since the focus of them is on the home and the household, but I also like to go outside then as well. It feeds kind of politer, going outside to greet the spirits of the place and make offerings of peace to them on their own turf, as it were, and I prefer to look for signs and omens outside than taking ogham (though I occasionally do that too). On a daily basis I prefer to look outside and see what the day might bring as I take a moment to offer up a prayer in the morning, rather than go to the shelf, although longer observances and saining are often done at the shelf.

A shrine isn't necessary, to me, but I do think it can help as a focus. It helps me articulate my beliefs and my relationship with the world around me. It's a microcosm, in that sense, and maintaining it, adding to it, helps to express how things change as well – seasonally, with decorations that reflect the time of year or the festival, and on a broader scale, too.
Posted by Seren at 10:39 No comments: