Ever since our celebrations for Là Fhèill Brìghde, Rosie's been desperate to visit Brigid's Well at Kildare, so while a few of our plans had to get put aside, Kildare was going to happen come hell or high water.

So on Wednesday (I'm skipping the museum for now because there's so much to get through...) we set off to Kildare. We headed to the town centre first and stopped to stretch our legs and have a spot of lunch. There's quite a lot to see in the centre, though given the kids we didn't do everything. I nipped in to the heritage centre and picked up a map of all the sites, and then we let the kids have a run around in a play park for a while. Our first stop after that was to the round tower, which is in the cathedral grounds: 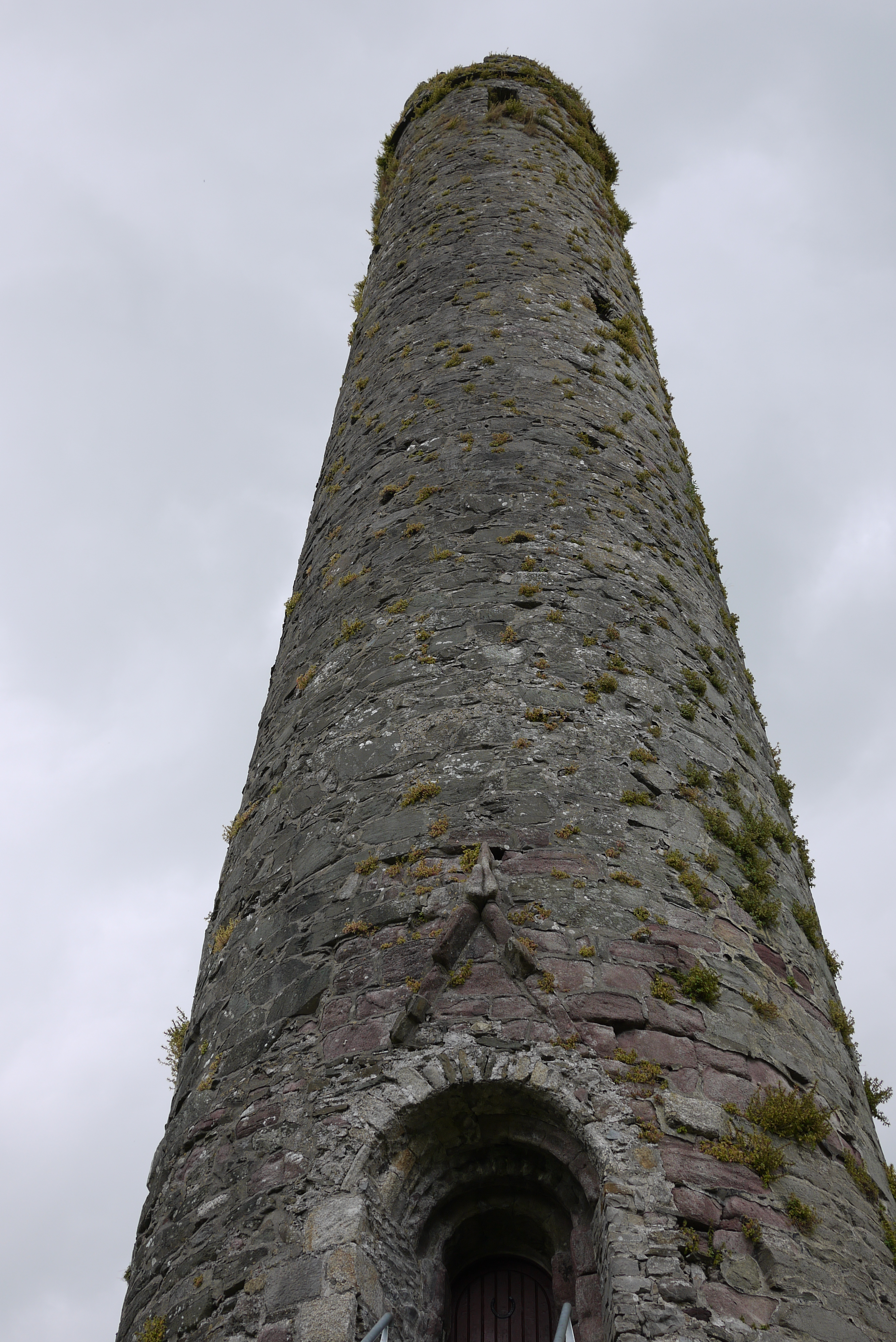 It's originally sixth century, but was majorly rebuilt in the twelfth and I think the detail above the doorway there is a flame. The tower itself is the second-highest in Ireland, and the tallest one that you can still climb up (it was closed when we got there, though).

Also in the cathedral grounds is the remains of Brigid's Fire Temple, which is still used to light a fire on Lá Fhéile Bríde. When it's not home to a giant fire, it seems it acts as a shrine: 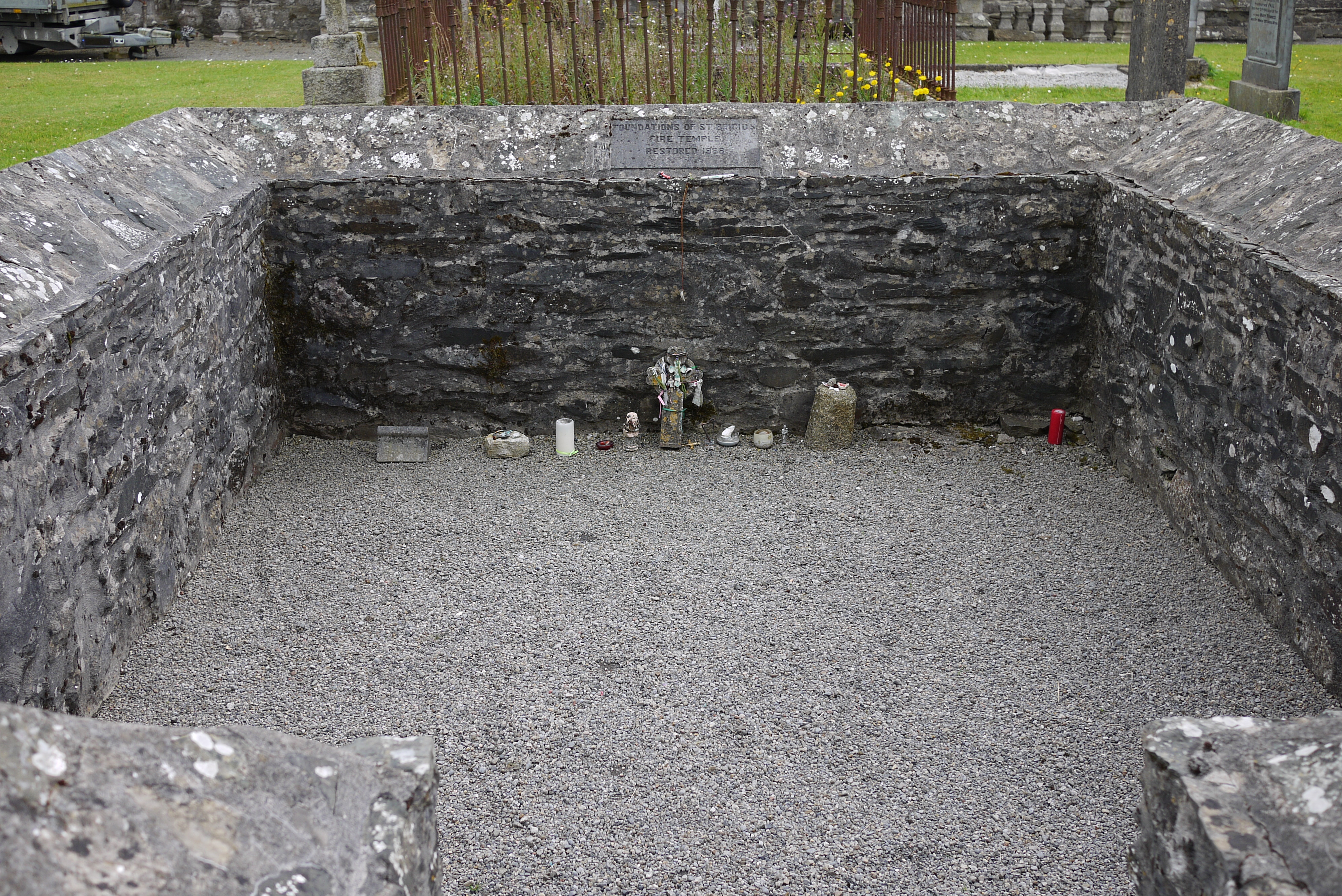 The kids decided they needed to add some offerings of their own, so they went to pick some flowers - buttercups and dandelions: 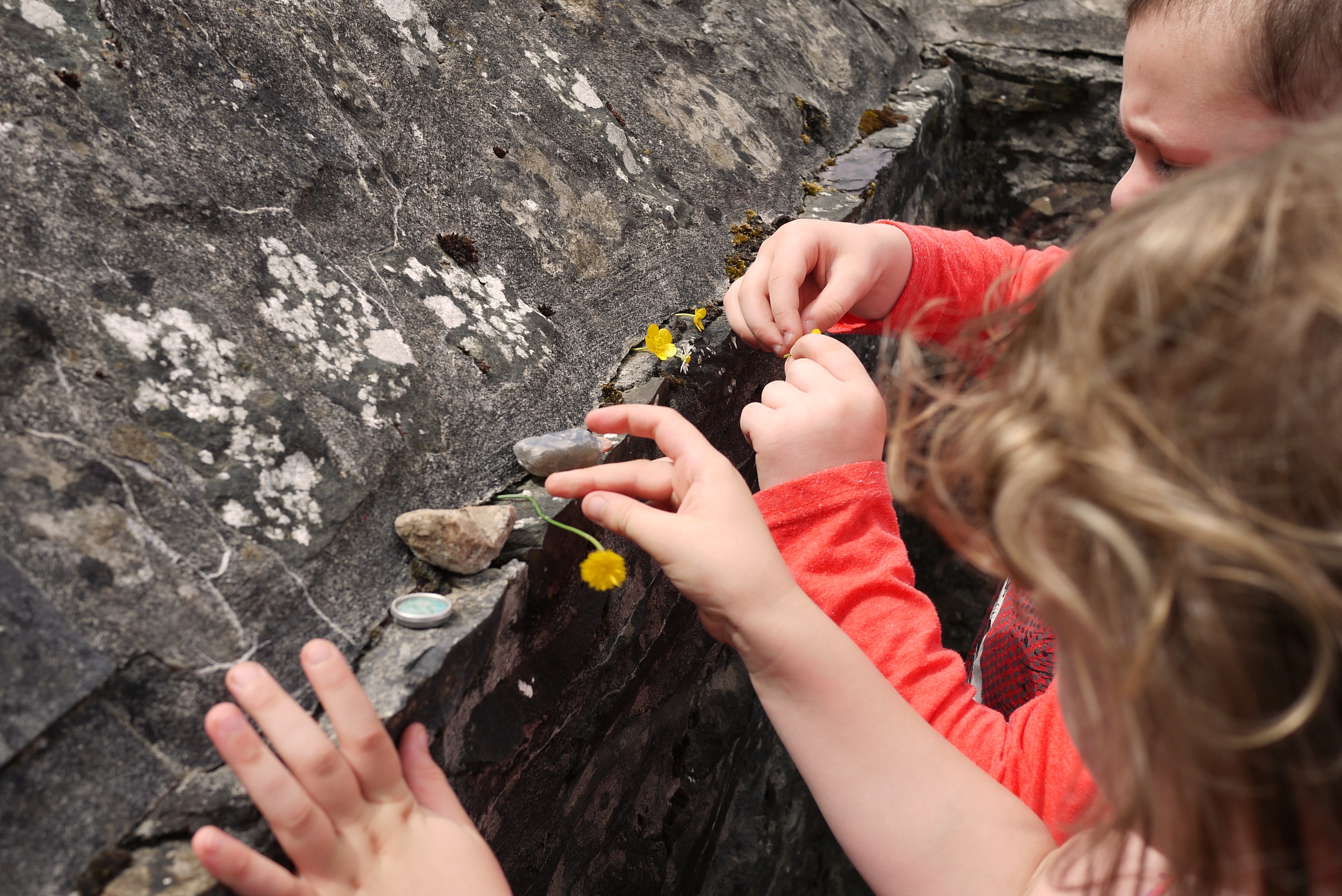 And I made some, too. Mr Seren wandered off around the graveyard, quietly being an atheist.

The cathedral itself pretty small, and full of Brigid's crosses up on the window ledges and hanging off the pews: 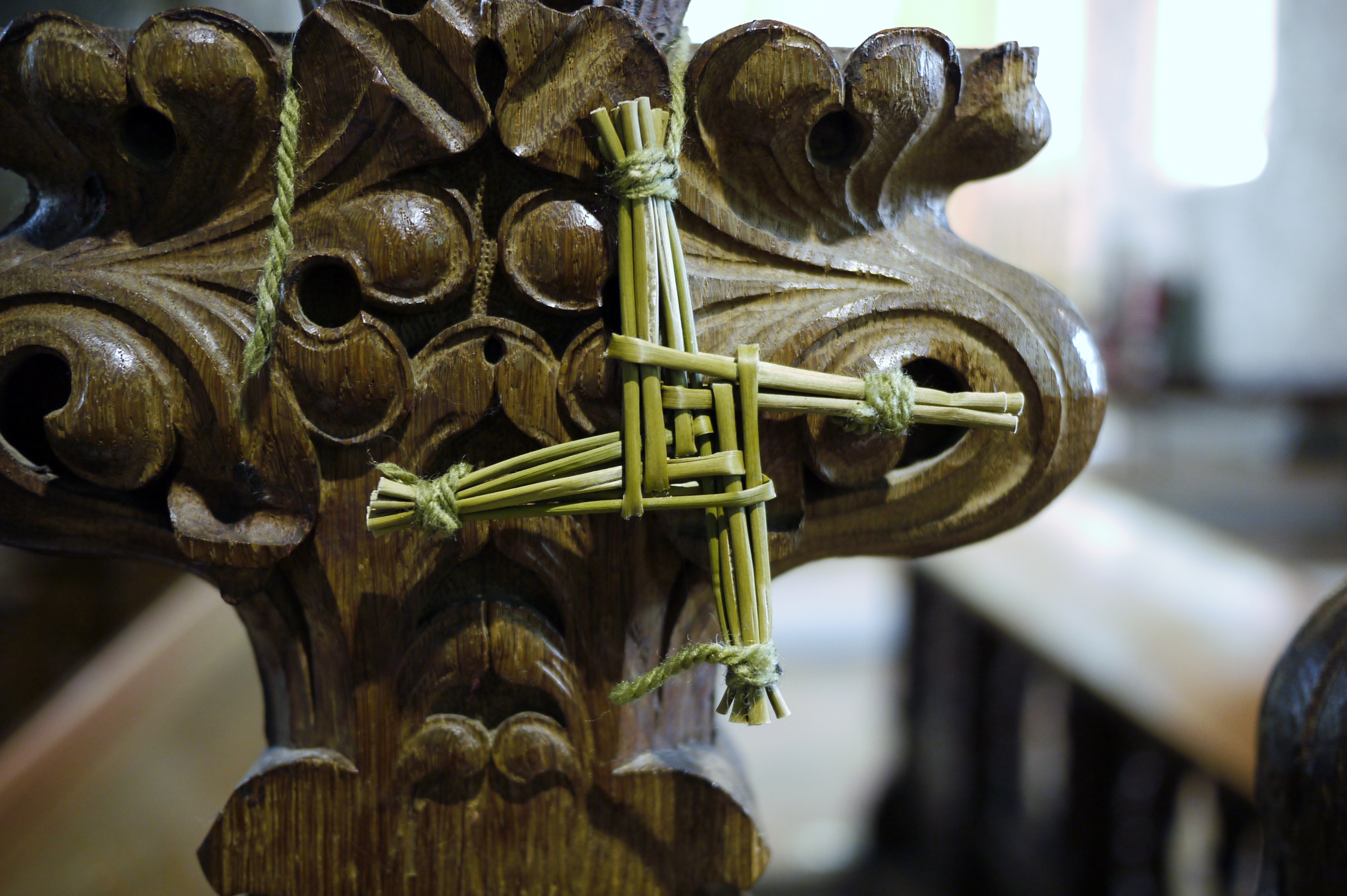 You can buy them from there for a good price, but at that point I didn't have any cash on me. I didn't feel comfortable taking too many photos because my camera beeps and the cathedral began to fill up with people as we were looking around, so it seemed a little intrusive. Back outside, near the entrance to the cathedral building, there's something called "Brigid's Kitchen," which was actually some sort of tomb. Built in the 14th century, it's empty now and you can go down and take a look. There's also some amazing gargoyles on the cathedral, although they don't beat the xenomorph at Paisley Abbey. Still, you can't bitch about gargoyles with cows: 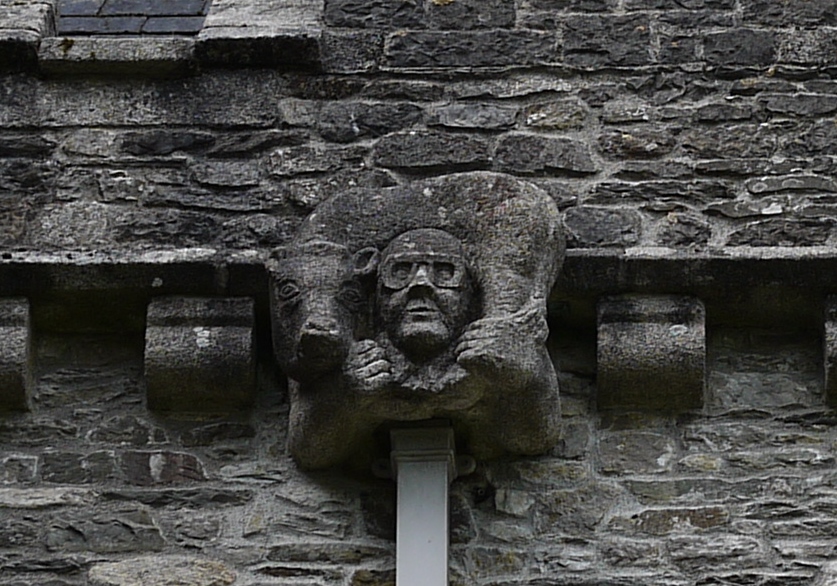 There's a castle lurking in the town, and a fair few abbeys about the place, but we didn't venture that far. After lunch we went to the well (and thanks to my excellent map-reading skills from the leaflet I got from the heritage centre, we got a little lost along the way...). But we got there in the end, and the trip is so worth it. From what I understand, it's not the original well - that's on the roadside, but because the road is pretty narrow and there's no parking, it was eventually moved to the current site to prevent accidents and road blockages (the newer well gets its water from the same spring as the original, though). The guy at the heritage centre marked down the vague location of the original well on the map I took, but it's not very obvious and we didn't spot it - not that we really made much effort to find it.

But the current site is beautiful - it's set away from the road and it's all fenced off and lined with trees, so it's like going into a quiet garden. Once you've parked up you go alongside a shallow stream and then walk through an archway into the site itself, and there's a notice telling you what to do (if you're Catholic, I suppose...) just before you go through the arch: 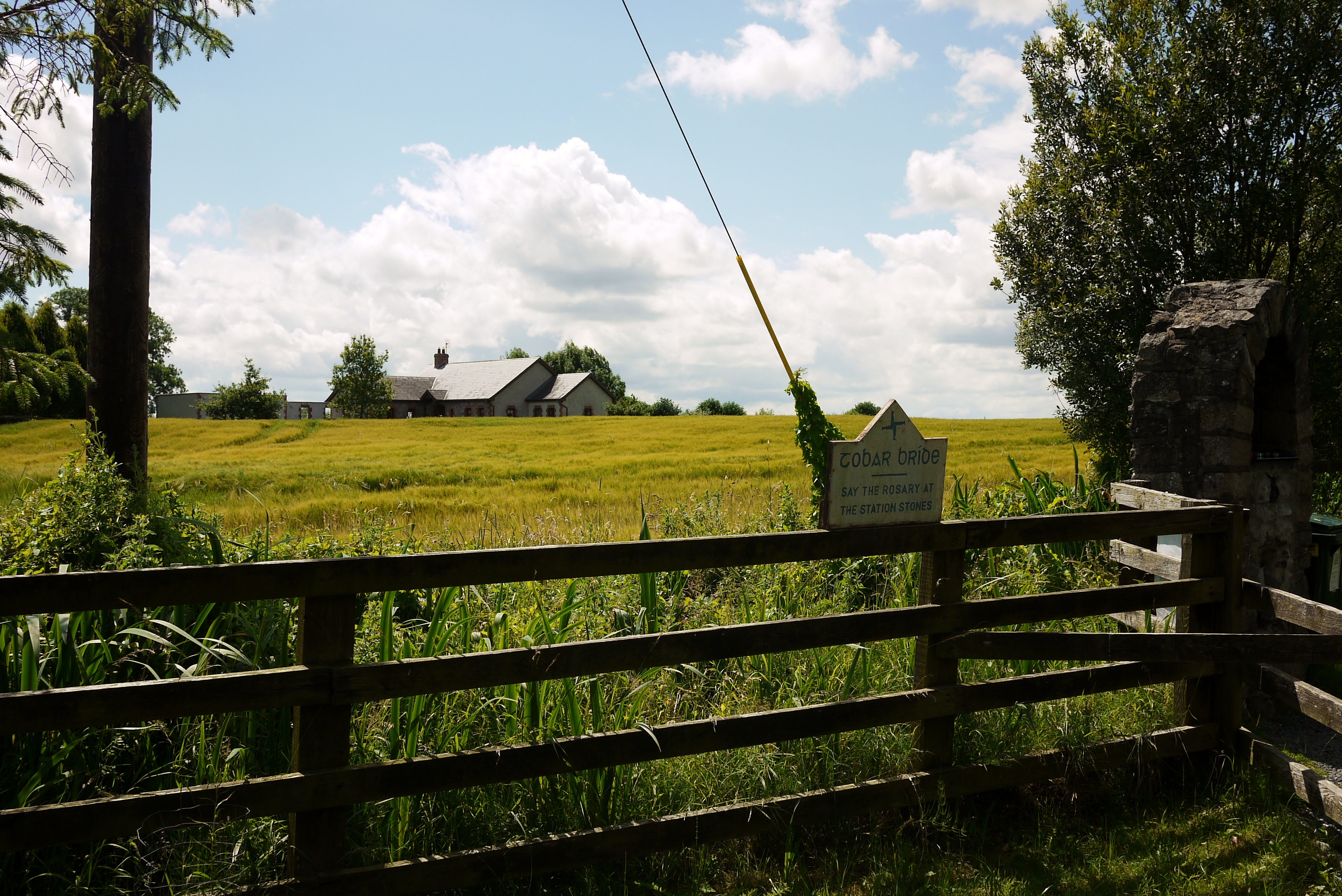 The corn's very nearly ready in that field there...

After you've passed through the arch there's a small shrine to the left, with a polite notice asking for donations to help with the upkeep: 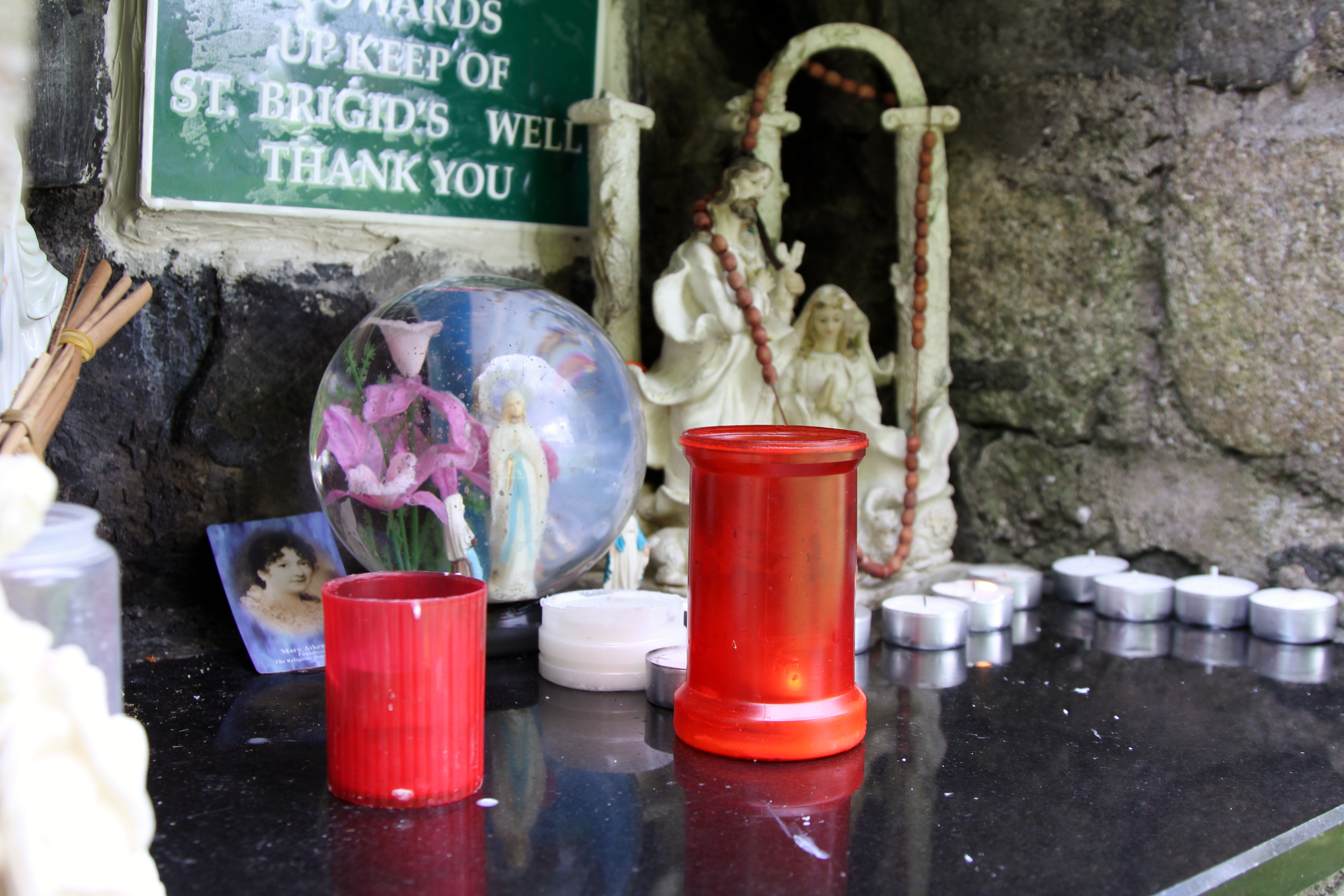 Further along and over to the right is the statue and larger shrine, which is separated off from the rest of the place by a shallow stream that you have to step or jump over to get across to the statue: 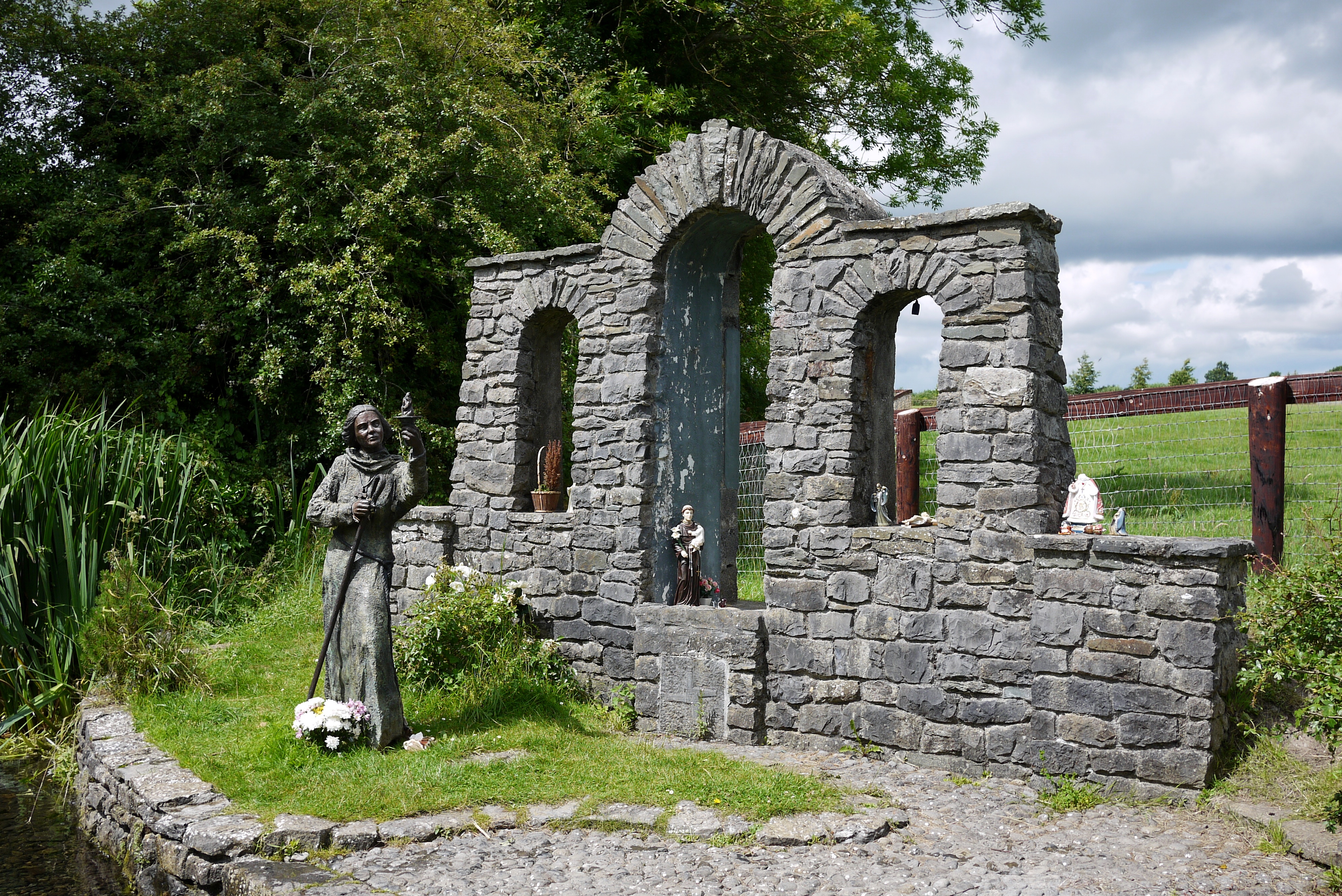 Off to one side there's a little archway where water from the well itself trickles along to join the stream, and then behind the archway there are several stations that lead up to the well, which is right at the end of the site: 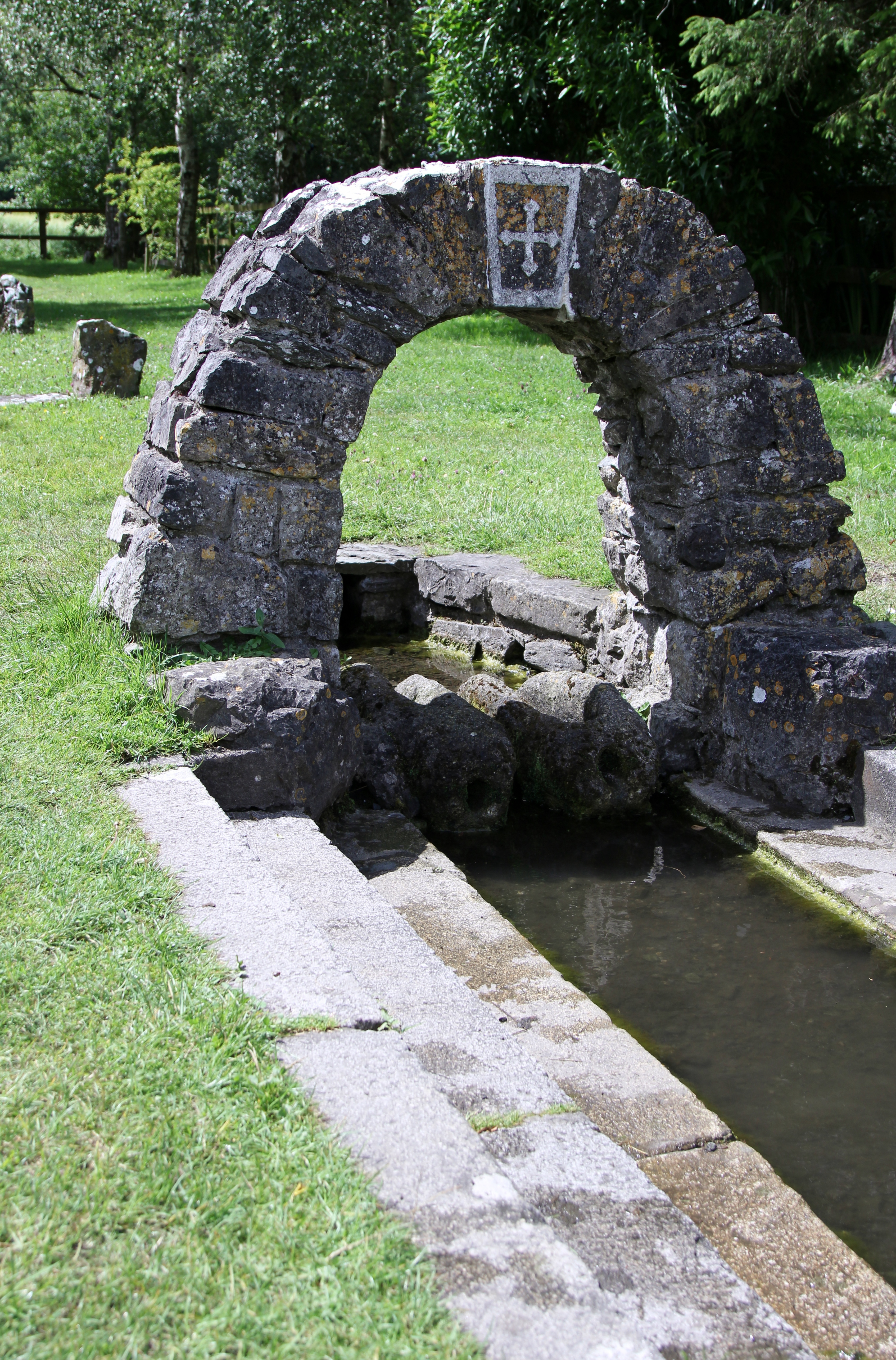 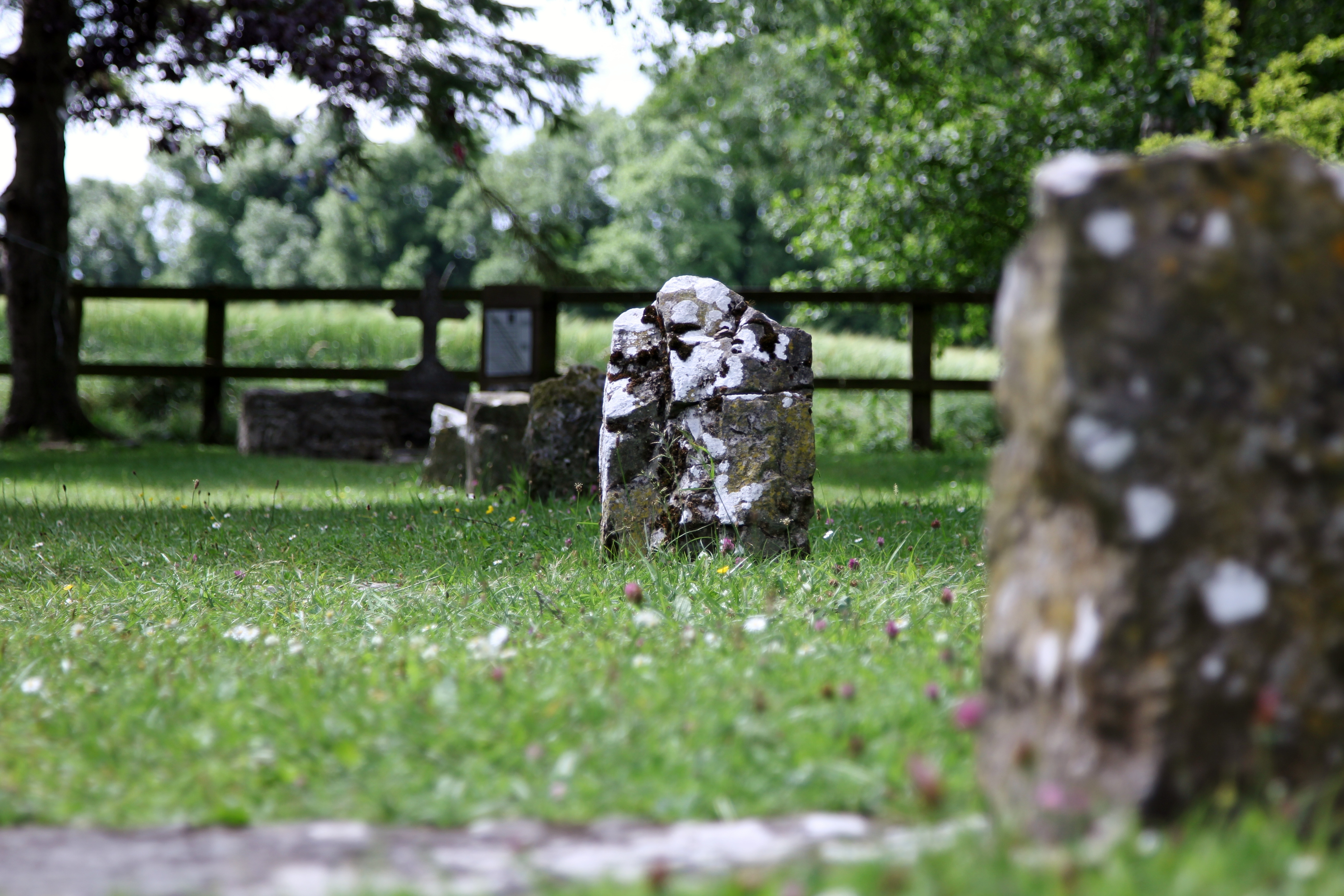 In the left-hand corner, right at the back, there's a wishing tree that's covered in rags, socks, gloves, crosses, pieces of jewellery, and all other kinds of offerings: 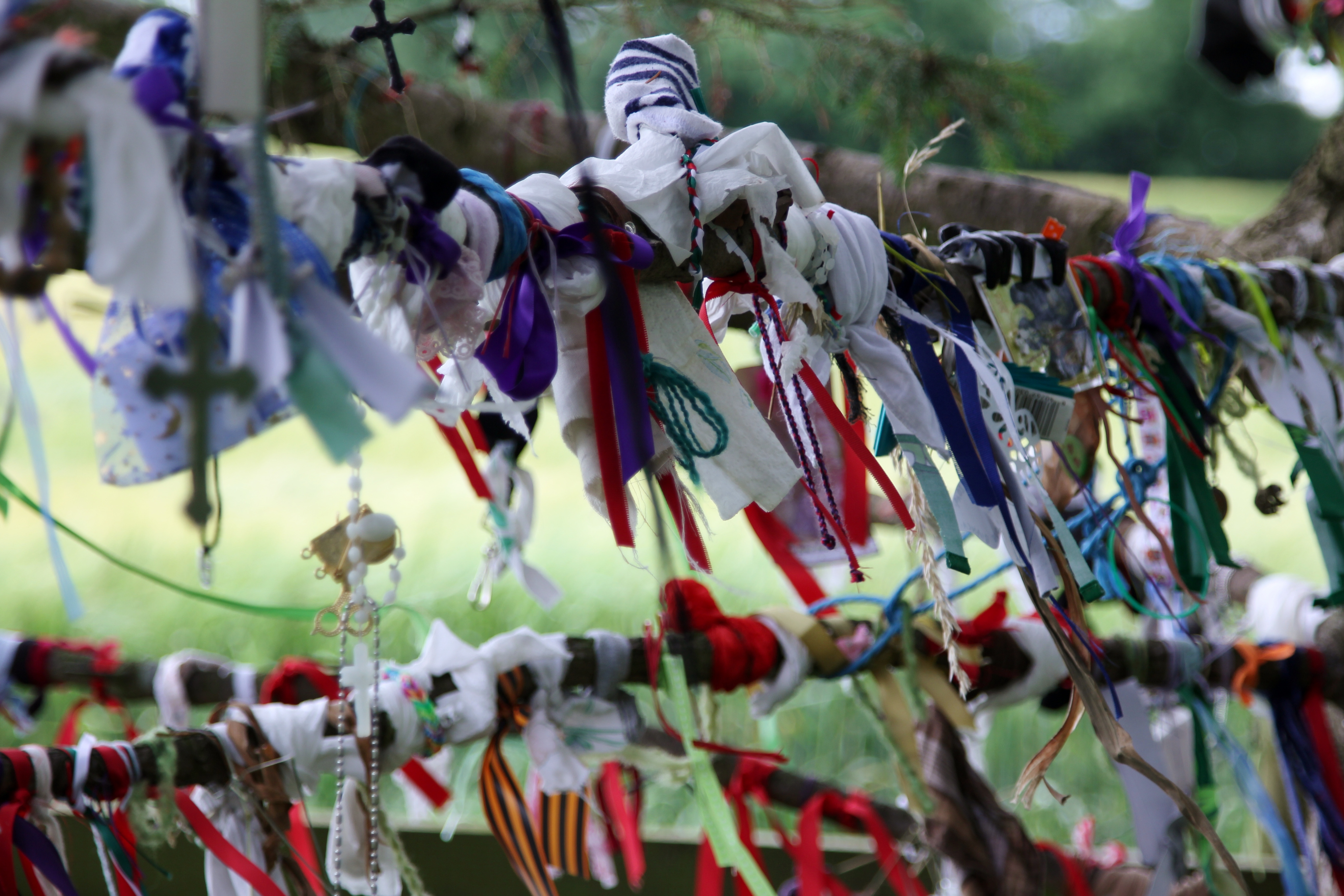 We didn't leave anything at the tree ourselves, and I have to say it was looking a little worse for wear - if you're going to tie a clootie, leave some room for it to grow, mm'kay? And make sure it's easily biodegradable - some of these look like they're tied on a little too tightly, at that's not going to be good for the tree. There's a large cluster of baby socks on a couple of the branches, though, and you just know why they're there. It's heartbreaking to see, but at the same time it's almost comforting as well, because it's a way for people to express their grief, and maybe to hope and to heal. Just before we left a man and his son (I'd say about nine years old) came in, and they went straight to the tree. They obviously had some business to attend to.

When we arrived at the well there were a couple of families already there, and there were five or six kids running around splashing in the water. Tom and Rosie joined in and I went up to the well to make my prayers and offerings to Brigid. Just as I did at Newgrange, I made prayers for some people who asked me to, and I prayed for myself and my family, as well as Gaol Naofa. I gave my thanks and collected some of the water to take home with me, too, and just before I did I caught sight of a tiny wee fish darting about. It disappeared not long after that, but I took it as a good sign.

The kids were having a whale of a time and eventually, after doing my own thing, I wandered about taking photos and joined in. The kids came to have a look at the well and wanted to make offerings there, so I helped them do that. They went a little shy and tongue-tied, so I made a little prayer of thanks for them. Rosie in particular liked the well, and spent a fair amount of time contemplating life, the universe, and pretty much everything. Also probably trying to spot the wee fish: 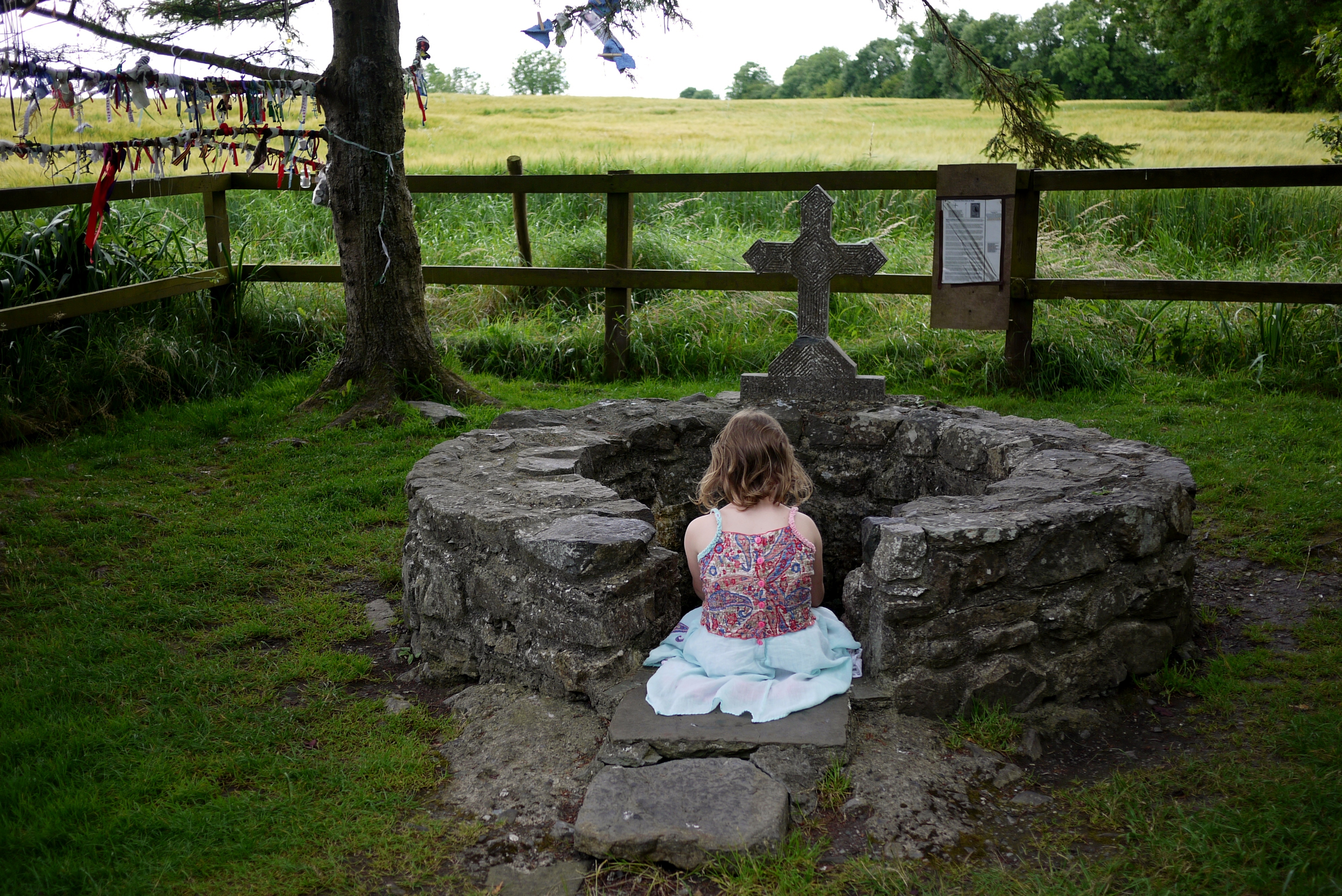 Eventually the other families left - they seemed nice and the kids got on well with them, but I was glad when they went because it was nice to have a chance to just be there by ourselves. But even with the kids running riot the place still has that inherently peaceful and sacred feel to it. The kids splashing around seemed to be welcomed, rather than disrespectful; they were enjoying the place and it just seemed right and as it should be.

Rosie was mesmerised by the statue, and once the other folks had left she made some offerings there as well, then poured out a libation, and poured some more at the wishing tree and a hawthorn tree right by the stream inlet. She was determined not to leave anyone out, and then she set about righting some of the smaller statues that had been left, which had fallen over. She and Tom eventually began to get restless, so we made our farewells and went back to the car. We decided to take a little detour before heading back to the hotel, and ended up taking a drive through Glendalough, which is a beautiful place but it's difficult to stop and take photos when you're sandwiched between a logging lorry and a tiny car hellbent on tailgating you all the way along. Right at the top we found somewhere to park up safely, so we could take in some of the scenery: 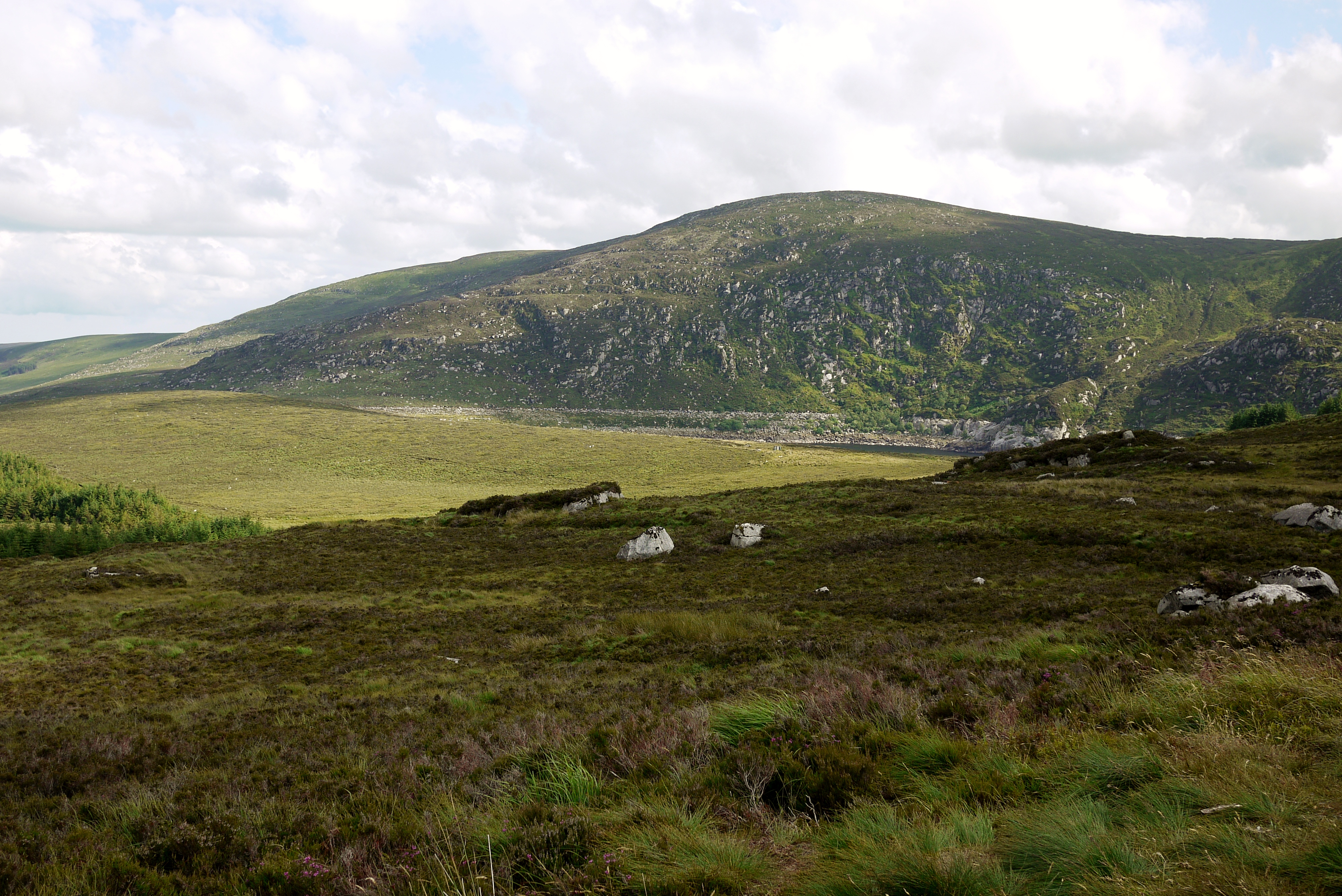 This is an old pilgrimage route, apparently.

Then we headed into Dublin to get some dinner, and after we parked up I spotted a mural of the Táin: 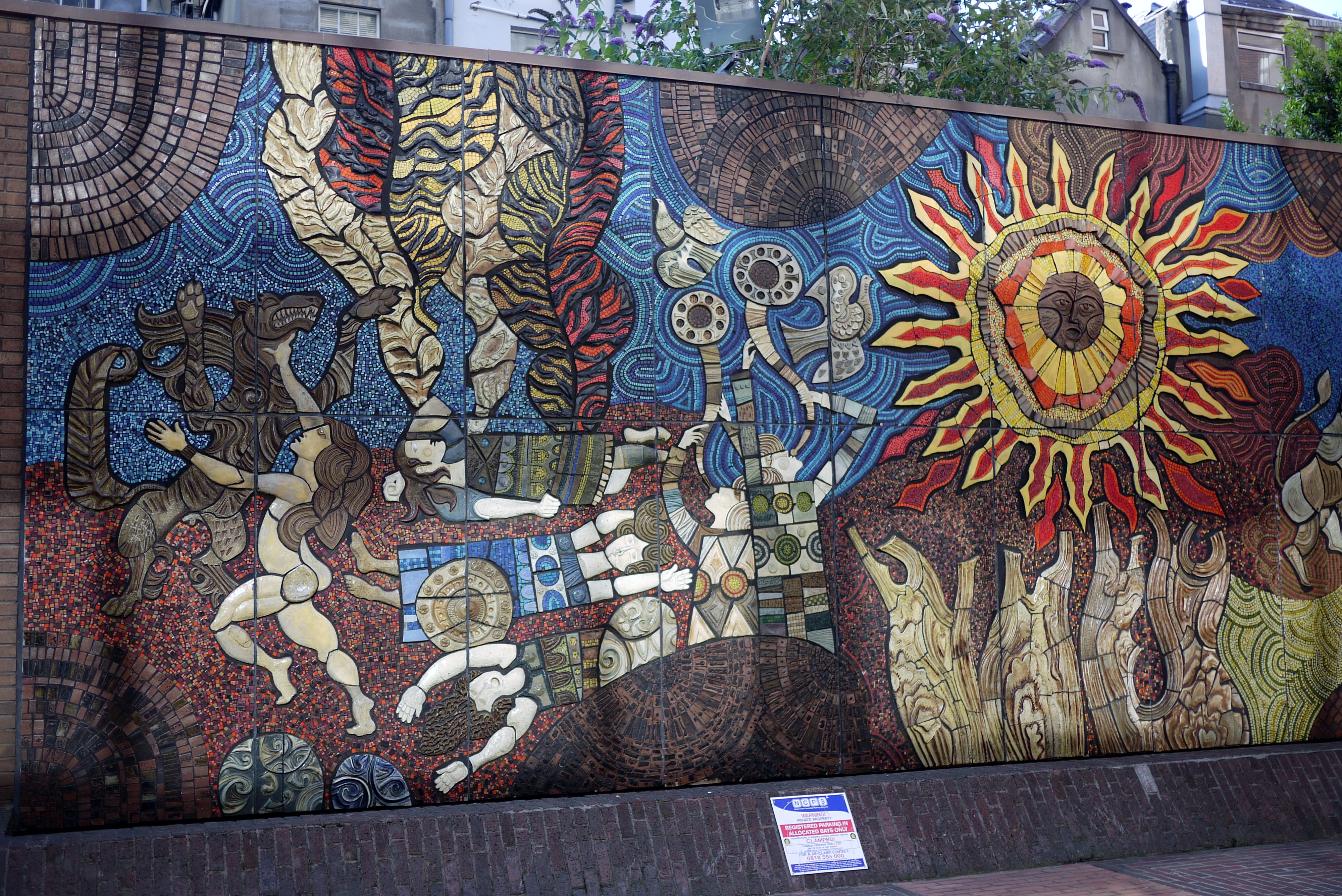 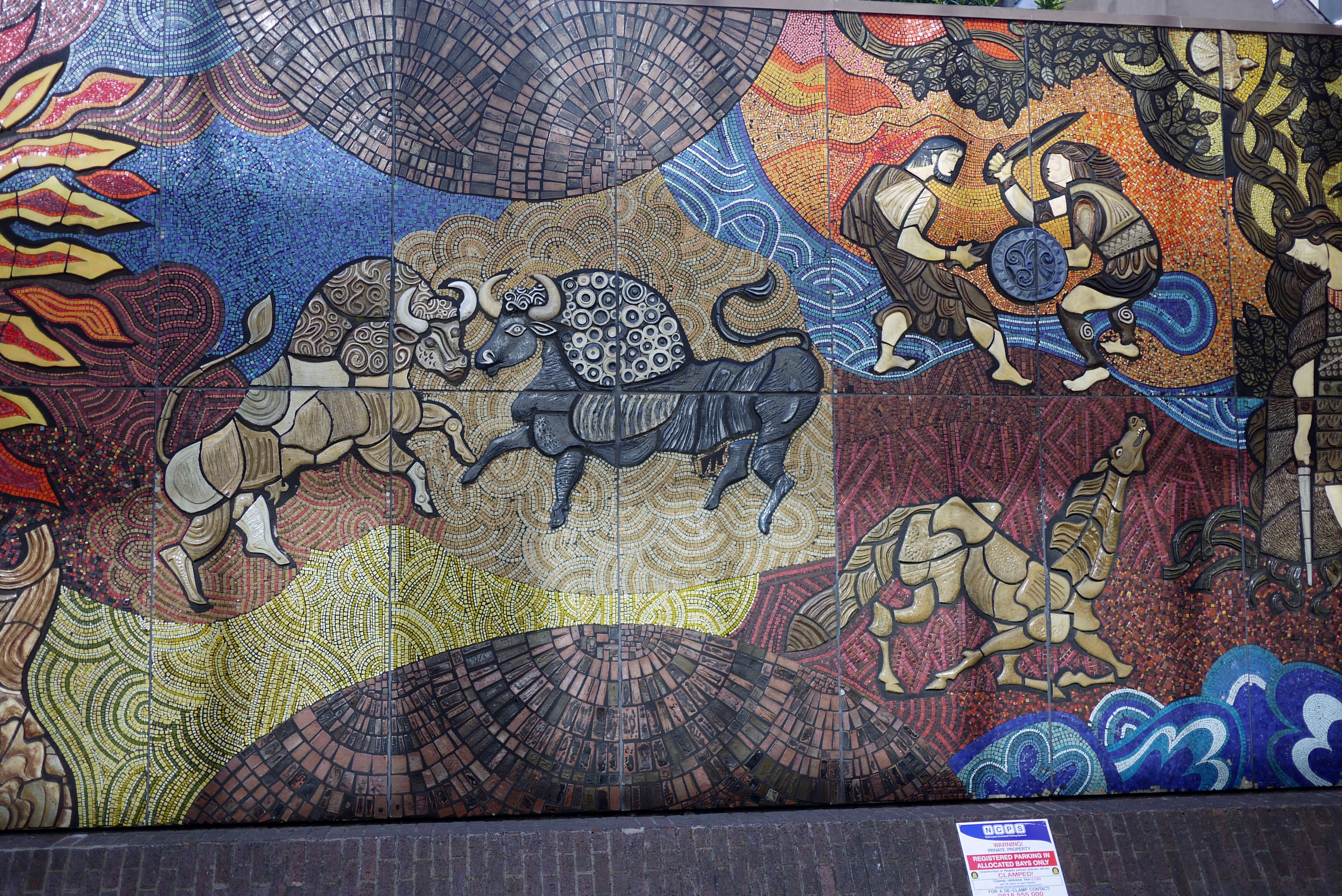 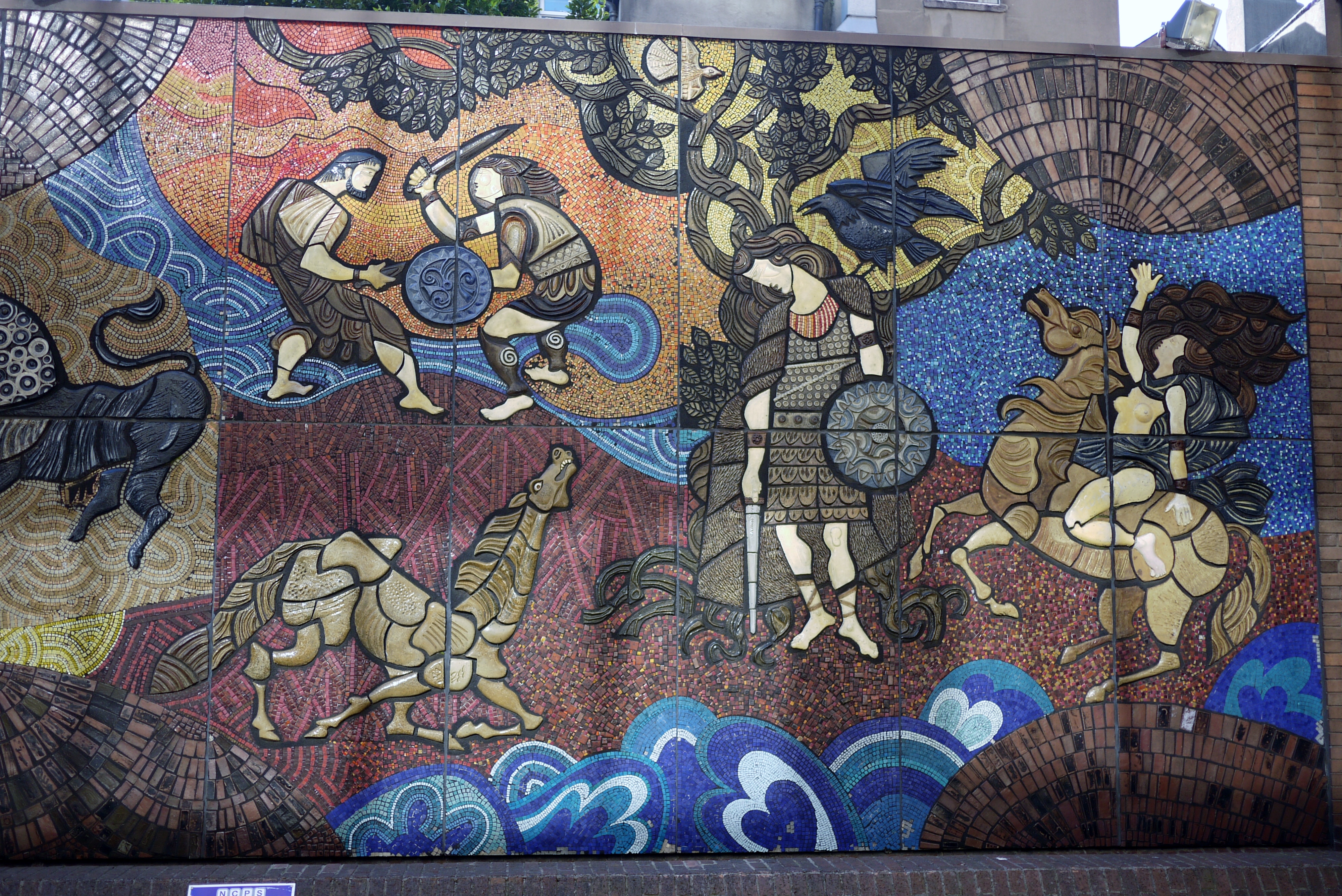 Which is really long and I couldn't fit the whole thing in one go, unfortunately. But over dinner I ended up telling the kids about the Táin, and all about the scenes that are depicted in the mural, much to Tom's amusement and horror when it got to the part about Ferdiad's demise.

The next day we took the kids to a water park as a surprise, but before that Rosie begged to go back to the well. I promised her we'd definitely go back one day...
Posted by Seren at 15:14 4 comments: