I might as well keep going while the laundry pile is slowly being reduced...

After a short break back at the heritage centre, we traipsed back over to the bus stop, pausing to take in the view of the Boyne and its clear waters - here's a view of the river downstream this time:

We got on the bus and headed to Newgrange. I'd heard from a lot of people who've visited the site before me that the place is pretty disappointing in some ways; a lot of folks aren't too happy with the reconstruction, either because they disagree with the way it's been done, and/or because the place feels a little too precise and neat. A little clinical, with all the straight edges and tidy walls, when we're used to things being a little slumped and lumpy when it comes to ancient monuments.

Personally, I'm not massively keen on the reconstruction, but it's not that it's "too tidy." It's that it just feels like a little bit of the spirit of the place has been trodden on, picked up, and stuffed back in, if that makes sense. The monument itself is truly impressive to look at:

Personally, I tend to err on the side of the quartz having been on the floor originally, and as my mother-in-law (also an archaeologist) commented, "Well I think we can all accept that Newgrange was a big mistake." But regardless of where you stand on the issue of the quartz walls, it's a really impressive site, whether you're far away or close up:

On a sunny day it's probably even more amazing to look at...

The quartz doesn't go all the way round, as you can tell from the wide shot. The back is similar to Knowth, with a protective ledge jutting out over the stones, but above the ledge there's a continuation of the wall (though not as high) in a grey stone (I'm not sure what kind):

If you want to compare and contrast the old and the new look, this is a picture from the early twentieth century: 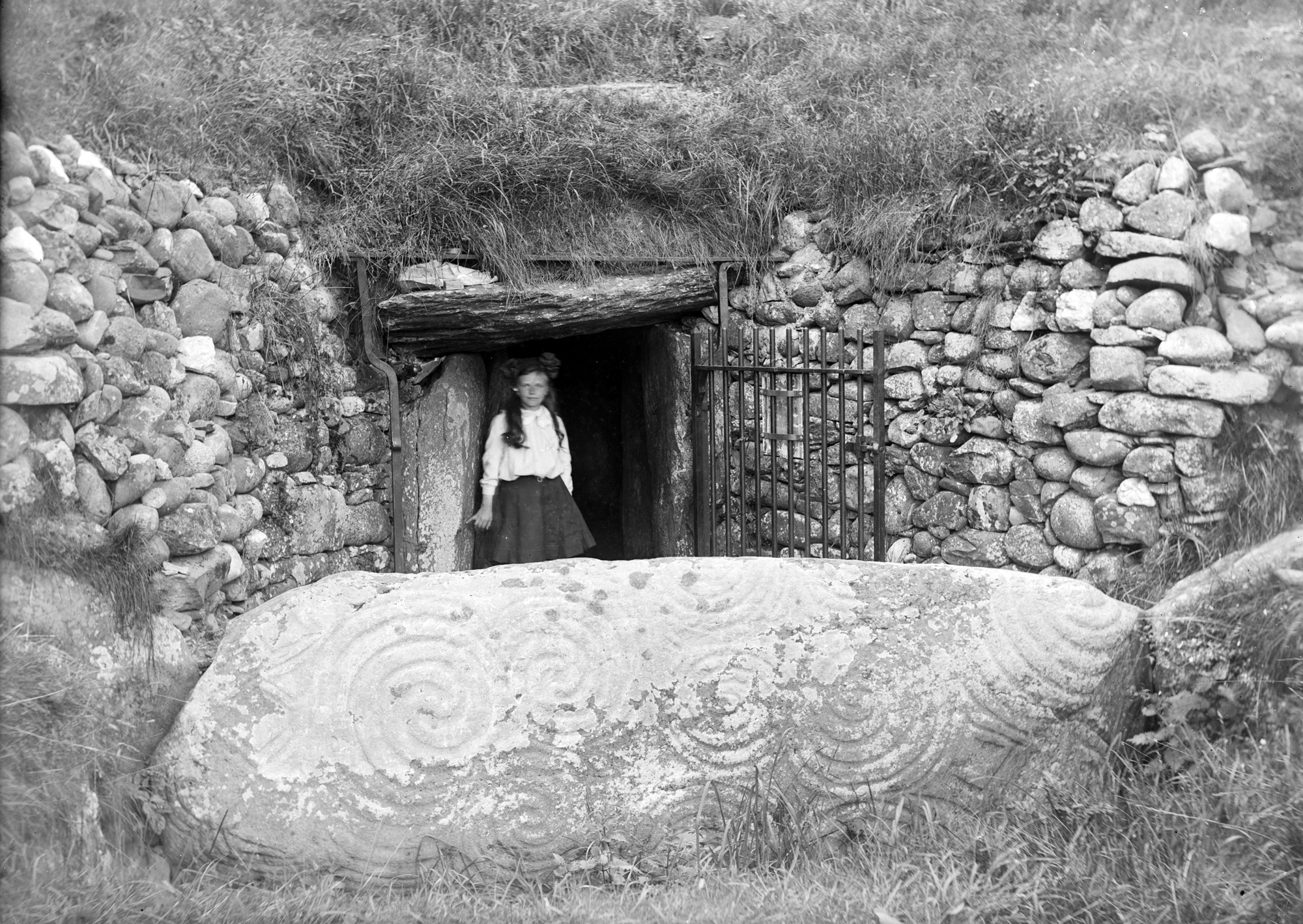 Which is itself after an attempt at tidying the place up during the nineteenth century. Before then, it looked like this: 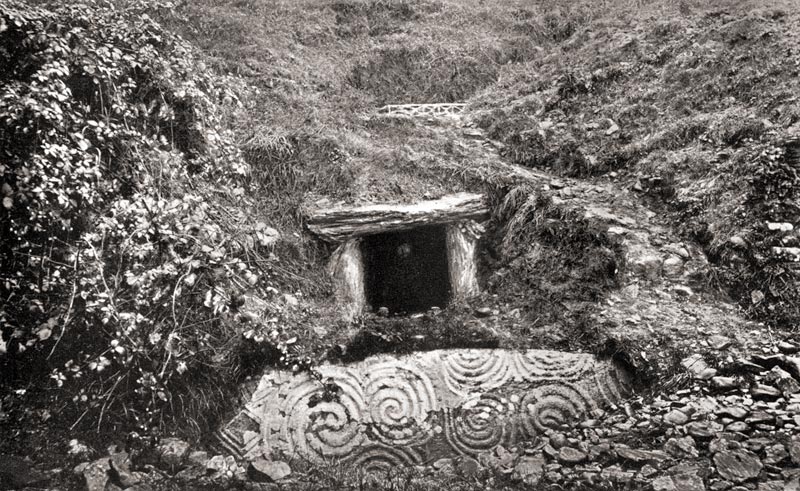 The whole mound was badly collapsed, so whatever your view of the reconstruction, it was never going to be an easy job. This is a picture of the entrance today:

From what the guide said, if I remember right, the grey limestone they've used here in the reconstruction isn't original to the monument itself. It doesn't seem to be the same stone from the early twentieth century picture, anyway.

You'll notice that the famous decorated stone there completely blocks the entrance, so you can't just walk inside. You have to climb over the stone to get in, and this a feature at Knowth and other sites of this type. The theory is that it forms a physical as well as psychological barrier between the space of the living and the dead. A literal as well as symbolic delineation.

You can also see the light box above the entrance, which lets the sun right into the chamber during the period of the winter solstice at around 9am (it doesn't just happen on the solstice, it happens for a few days before and after as well, for about a week. The solstice is the peak period of time where the light shines in. Assuming there's any actual sunlight, and not just cloud...). There's a theory knocking around at the moment that suggests the light box could have been adjusted periodically, to let the sun shine in at other times as well, but I've not seen much discussion of the arguments for or against the idea to have much of an opinion on it at the moment.

When you're bused over to Newgrange, you go in groups of up to 50 people or so. The guide takes you into the chamber inside the monument, but because there are so many people you're split into two groups so everyone can fit in. It's still a tight fit, and you're instructed not to touch the walls or wear your bag on your back in case you accidentally scrape against anything. You're not allowed to take photos inside the chamber, and the guide insisted that this was out of respect (completely ignoring the fact that the chamber has been installed with lights and electricity cables, and she regularly invites groups of 20 or so people to come and gawk inside an ancient burial place that's been thoroughly disturbed over the years). The guide at Knowth (where photos are absolutely fine) said to ignore whatever excuse the guide at Newgrange gave; the restriction on photos was purely practical and due to time constraints. Because it's so crowded when everyone's in there, it's difficult to get any good pictures and people would end up hanging around and waiting for everyone else to leave, thus resulting in a game of burial chamber chicken... Fair enough, I suppose.

But anyway. When you go inside, you start off making your way along a very low, narrow passage until you reach the chamber, which has a corbelled chamber (like a beehive), and you can stand up comfortably again. The chamber is cruciform, with a shallow recess right at the back and recesses to the right and left as well, making a cross shape. The recess on the right (as you're facing inwards) is the largest and most heavily decorated, and it contains one of those large stone basins that I included in the waffle about the displays at the heritage centre, yesterday. The basins are so large that the people who built the place must have set them in position first and build the chamber, passage, and then mound around it. Although the chamber was heavily disturbed by the time it was excavated, they found the cremated remains of four or five people, mostly on the floor but possibly originally in the basins.

The chamber is nicely lit when you first get there, but after a little introduction the guide switches off all of the lights to give an idea of what the solstice sunrise rise (using a specially placed light). At this point the guide began speculating about the meaning of the light as it works its way inside, and she began going on about the ancient mother goddess and sky god, to which I let out a quiet sigh and banged my head against Mr Seren's shoulder...

Back outside there's a little time to have a look around by yourself (we were part of the first group to go inside), and it's apparent that there isn't as much decoration on the stones as there is at Knowth - pretty much every stone is decorated there, but here only a few are. Whether that's because most of them have been robbed out and then lost or destroyed over the years, or because that's just the way it is, I'm not sure. I know some of the stones were robbed, at least.

Although you see the same kind of circles and spirals as you do at Knowth, there are also a lot of geometric shapes at Newgrange, giving a very different look and feel to the art (or symbols, if you will):

These pictures are of one stone, it was so large I took two pictures just to get the details. There's also this one:

Again, what these symbols mean, we can only guess. Of course, the most spectacular stone is the one at the front of the tomb, and it would be remiss of me if I didn't give you a close up:

The detail is truly amazing on this one, and I could happily trace those spirals all day long...

Before I finish up, let's take a look at the surroundings. Like Knowth, Newgrange is situated in a spot that commands a fantastic view of the area around it:

Though not quite as expansive as the view at Knowth:

You can see a lumpy bit in the field there, and that offers a reminder of the fact that the passage tomb at Newgrange isn't isolated. There's a huge amount of Stuff (it's an official archaeological term, honest...*ahem*) surrounding it, it's just not as obvious, or accessible, today as the Knowth complex is. That's a big shame, and it's not something that the guide spoke about either. But we can't really consider Knowth or Newgrange in isolation, in and of themselves. They're part of a bigger ancestral landscape, as the heritage centre went some way in showing, and although they're very much a part of the time they were built and then used as passage tombs, they're also both very much a part of the Iron Age and beyond, up until today. Even after they fell out of use they remained significant and were tended to and revisited again and again (although at some point Newgrange was "forgotten" and then accidentally rediscovered in the seventeenth century). Knowth became a settlement, and people continued to inter their loved ones into the mound of Newgrange - or Brú na Boinne, to give it its proper title - and made offerings there.

The two sites are pretty close together and have their own legends and myths attached - Knowth is said to be the resting place of Buí, while Newgrange is the home of the Dagda or Oengus. There's also another passage tomb nearby, Dowth, which isn't included in the tours on offer (unfortunately), and which we didn't manage to visit - though you can if you can find it. Signposting is often rather haphazard in Ireland (as is the driving)... But we have to consider the bigger picture: Their position and relation to each other, as well as their relation to other nearby sites like the Hill of Tara and the places we don't know any more, or don't know as much about. It's all a part of a landscape we only have glimpses of, really. We're missing so many of the pieces today, which is frustrating, but we also know more today than we used to. But we'll never truly know what these sites meant to the people who built them. It's unlikely that we'll ever be able to read the symbols as they were meant to be read, or understand the kinds of rituals that were held at these places. We can speculate, and we can generalise and imagine.

But most of all we can look at these sites and know what they mean to us today. Whether they're a home of our gods or ancestors, a testament of human achievement, a symbol of a nation's heritage... They're something that will always fascinate and inspire us, however we think of them, and whatever they mean to us on a personal level.
Posted by Seren at 13:30 No comments: